Details: We're in Massachusetts in a 1930 house, the soil in our area is classified as "fine sandy loam". We have gutters on all sides with downspouts that are extended a couple of feet away from the house. They're cleaned regularly. The surrounding landscape is reasonably well graded away from the house. The basement walls are built from cinder block units and there is a concrete slab. At some point they must have been painted by an old version of drylock-type paint.

Symptoms: About 50% of the wall area looks ok, with only some chipping paint 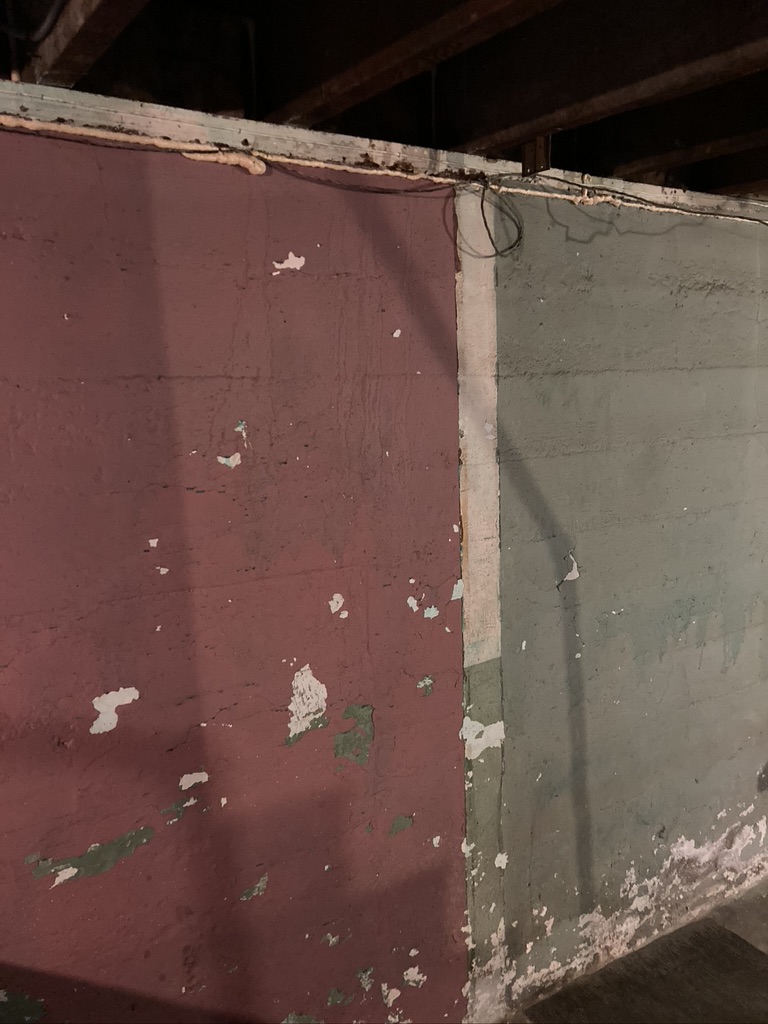 . There is some minor spalling in the bottom two rows of concrete blocks in about 40% of the walls 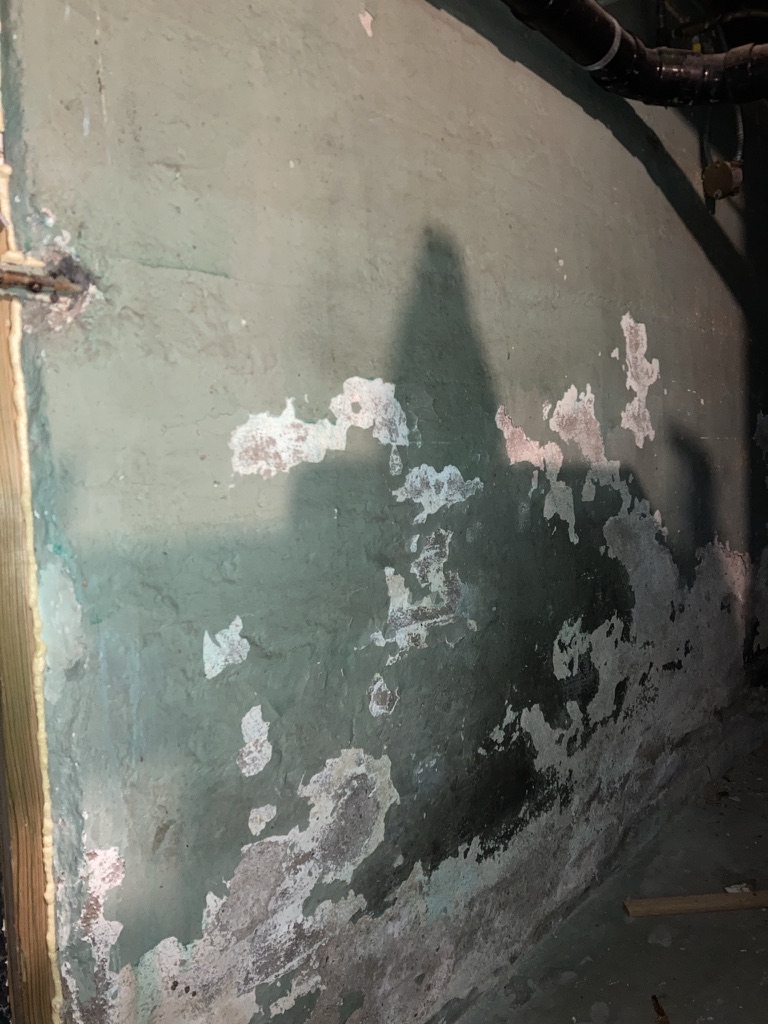 . One wall area, about 10%, has more significant spalling up to about the 7th out of 10 rows of concrete blocks 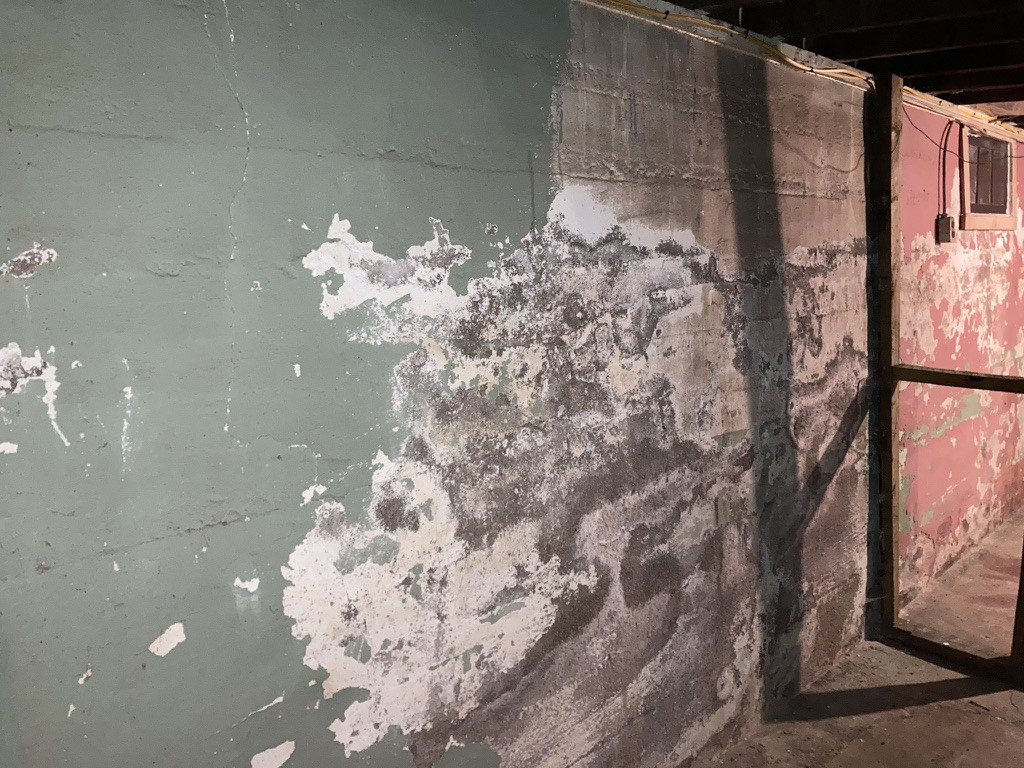 I have to run a small dehumidifier to keep down relative humidity. I have used the “plastic sheet test” (taped a small piece of foil to the wall and checked for wetness on inside and outside surfaces), which came out dry on both sides.

I’m assuming that the spalling in the bottom rows is a kind of “rising damp” from below. Given the age of the house, I guess there is not much in terms of a capillary break. Confusingly, the area with the more significant spalling higher up on the wall actually abuts our mudroom, which has a vented crawl space on a dirt floor. I would have assumed that this would keep the foundation dry, since there is no way for rain to fall right next to that wall.

Proposed solutions: I’m not sure what else I can do on the exterior to reduce the moisture in the wall. My plan right now is to clean and patch the spalling concrete and then use drylock or a similar product. After this, I will glue rigid foam to the upper half of the wall, to only cover the above-grade portion of the concrete and the top 2’ of below-grade area. My hope is that this will allow the wall to dry in the “wetter” bottom rows.

Questions: Will the proposed solution keep the walls dry enough to install rigid foam? How will I know that I have succeeded in managing the moisture?

You’ve done the “plastic sheet test”, your gutters are not to blame, the lands is properly pitched and your soil has good drainage, so it’s unlikely that the water is coming from the ground. I say that the source of moisture is the warm, humid summer air condensing on the cold basement walls. Follow my explanation.

Things get more interesting in the summer. The upper part of the wall gets much warmer because the outdoor temperature is higher and the ground warms up. But the soil below the frost line is still around 55F, so the lower part of the wall is cold to the touch, and it stays cold all summer.

As outdoor air enters your house in the summer through the myriad air leaks of 1930s construction, it brings humidity with it. Summer temperatures in this region, especially in the mornings, are just a few degrees above the dew point. Any of that air that makes its way into your basement will ignore the warm upper walls, but upon contact with the lower wall, the moisture in that humid air will condense. You will have a microscopic film of moisture on the lower parts of the walls, and that moisture will be absorbed by the concrete. On especially humid days, there may be droplets and drips.

This is what has caused the damage to the wall surface primarily below the outdoor frost line: the constant wetness during your humid summers.

If you can seal any obvious air leaks, then do so.

One small dehumidifier may help a little, but you would have to run multiple dehumidifiers to keep the basement air below 50% relative humidity or so in the summer. But this would cost a fortune in electricity.

You need to insulate your walls, and ideally, your floor too. Insulating just the upper part of the walls may keep you warmer in winter, but it won’t stop the condensation in the summer, which occurs down low. And you need a vapor barrier to keep humid air away from the concrete.

I think the ideal solution would be a layer of rigid foam on the walls to act as a thermal break, then a stud wall from floor to ceiling with glass fiber batts, followed by a continuous vapor barrier, then covered with gypsum board. Between that and the existing small dehumidifier, you won’t get any more condensation from humid summer air.

Not the answer you're looking for? Browse other questions tagged basement waterproofing or ask your own question.

4
Vapor and moisture barrier for "above ground" basement
0
Help with basement wall insulation
2
Help diagnosing source of basement moisture
0
Basement framing and insulation question
2
Drylock First or Anti-Mold Paint First?
0
How should I handle moisture/insulation as I finish my basement?
0
Is A Moisture Barrier Required/Redundant with Basement Waterproofing System?
1
Insulation basement (Rigid Foam). What to do in the unfinished area
0
Basement Insulation/Vapor Barriers