Must these old pipes be replaced?

We are currently renovating our bathroom ourselves on the 2nd floor. We were going to redo the tiles only, and we found a newspaper from 1947 around the old pipes which means it was installed a long time ago. We started to wonder if the pipes have to be replaced, but it’s not what we planned at the beginning.

One day we had to call a boiler technician, so we asked him if the bathroom pipe should be reinstalled. He strongly recommend to reinstall the entire bathroom pipes. He assumed the cost might be 10K to replace the entire pipes because it’s the 2nd floor, but he wasn’t a plumber. He told us to get a plumber for an accurate cost. I know it’s a good opportunity to replace them since we already opened the floor and the wall, but 10K is too much money for us.

As a non-professional, I think the pipes are in a good condition. They seem very sturdy and no leaking at all. I think they can stay 50 more years. I’m thinking about closing the floor without replacing the pipes. Please tell me if I’m an idiot. 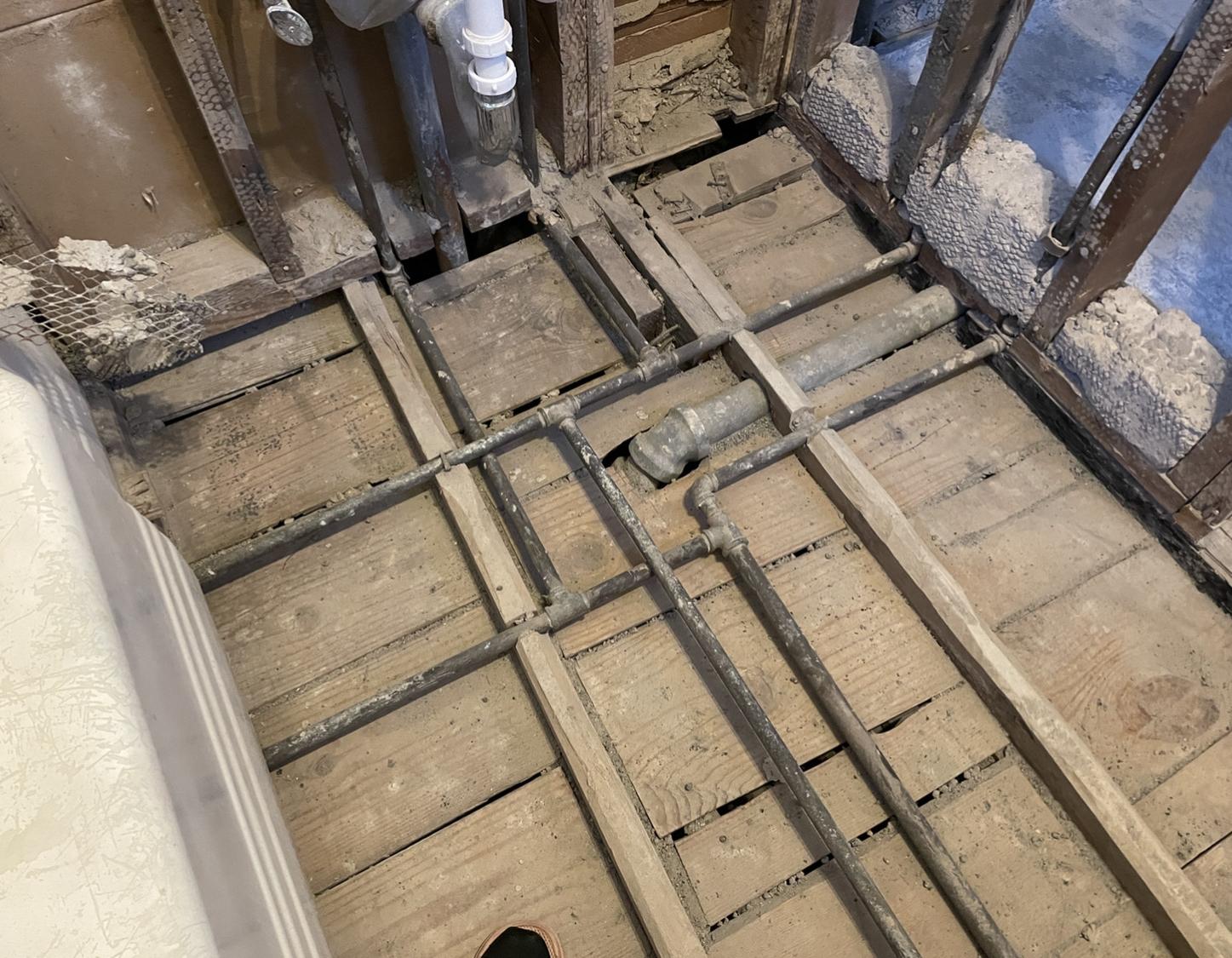 You're not an idiot because you asked an intelligent question!

The problem with old iron/steel pipes is they rust on the inside which narrow downs the interior which results in reduced flow which gets worse over time and eventually they might even rust thru and cause a leak.

You've got it opened up, now is the time to upgrade. You'll hate yourself if you have to rip up a remodeled bathroom to replace 70 year old plumbing. PEX isn't hard to install and would make a great replacement and if you get the right tools (like a PEX expander), you can DIY, but if you're not comfortable with it, a decent plumber should be able to replace all that with PEX for a LOT LESS than $10K. I know pricing is off topic here, but just wanted to say.

The other advantage of PEX is even if it freezes, it is far less likely to burst like iron or copper would. DK where you are, but if in a cold climate area, that can be a plus.

EDIT NOTE: I updated my answer to include information provided by other comments and my further research. In a nutshell, PEX is far less likely to burst than copper or iron pipe, but it's still a possibility. Thanks for the other contributors comments.

The lifespan of old galvanized pipes depends on water balance. If the water is alkaline over 7 pH the pipes will eventually close up with calcium deposits. If it is acid under 7 pH they will rust out and start leaking ( you may see rust at joints.) If the water is balanced this kind of pipe is expected to last 75 years. Hot water pipes generally deteriorate faster than cold pipes. 10k is more than I would expect to pay for this job, DIY would cost a few hundred $ at most for PEX. If there is no rust, and you have good pressure, I would expect to get another 8 to 30 years from these pipes. Weigh this against how long you expect the remodel to last.

The price the guy mentioned might be accurate for a whole house replacement including wall repair and painting. You only need to do what is under the tub and in the floor before it is covered back up. It should be replaced to the point where if any leaks do occur, it will not mean tearing up your new floor or anything in the bathroom. This will mean smaller repairs needed in other rooms if not accessible from the bathroom side to do a tie in. This will depend where the threaded ends are in walls or floor to set an adapter on to transition it to PEX or copper. There are 3 kinds of PEX, it is advised to stay away from "C". "A" and "B" PEX is the type to use, PEX A being the best.

Back at the tie ins. The most you would need I expect, and this is a guess that there would only need to be 2 to 4 holes in other areas at the worst to tie in the hot and cold in 2 different places. That is a hot and cold going into the bathroom, and a possible hot and cold going out to feed another area if it is set up that way.

Your biggest issue is the drain line. That will look like that picture on another answer since air gets in drain lines to allow rust to start. Water lines, perhaps not as much, but other deposits do form inside those types of pipe, calcium being the biggest offender of water pipes.

Must these old pipes be replaced?

No, unless your town has a code which states that galvanized plumbing must be replaced during an opportune time such as a remodel.

Should you? Yes. Don't wait for a must situation or else you'll be replacing a lot more than just pipes. Consider everything below your bathroom trashed.

My house was built in 1940 and 2 years ago I replaced all of the the downstairs galvanized water pipes with PEX; costed about $900. Once I'm ready to tear into the second floor you can bet your last dollar that I'll be replacing the galvanized pipes.

When removing the old galvanized pipe I was curious as to how difficult it is to unscrew these joints as opposed to using my sawzall so I grabbed some pipe wrenches and twisted a tee right off; the threads were left inside of the tee.

This particular joint would probably have failed in the next few years. It was rusted down to a pinhole about 1/8" in diameter and was the source of terrible hot water flow for our kitchen and upstairs bath.

Rust begins life on the inside of the pipe and if you start seeing surface rust that that means it has breached the entire wall of the pipe.

Make note of the water leak from the rust spot on the right. 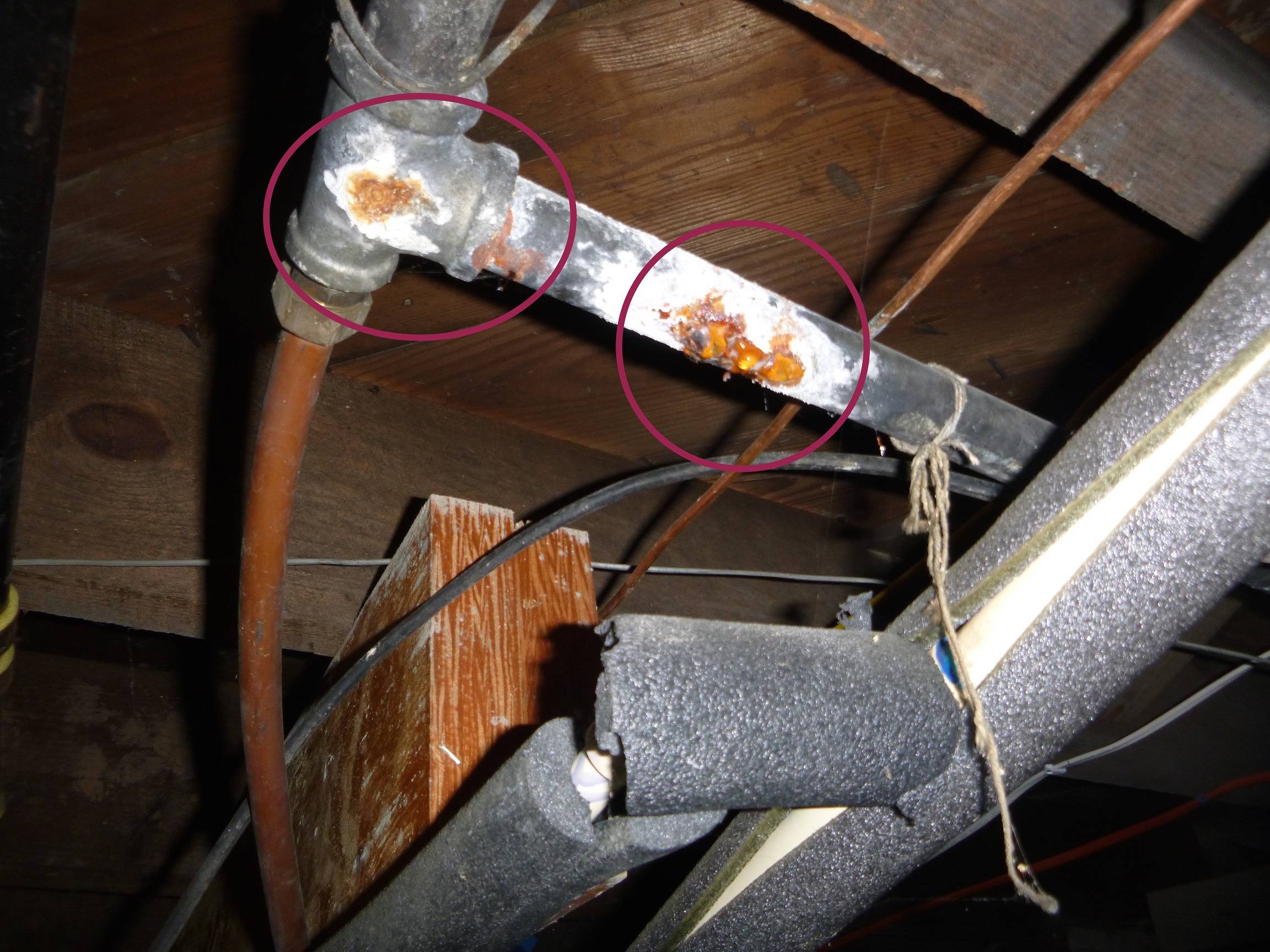 While galvanized pipes were originally expected to last 80-100 years, the quality of the water in your area can shorten the life of these pipes. Hard water with minerals breaks the galvanized coating from the inside and allows rust to start. If you can find a location to inspect the inside of a section, you can check the inside of the pipe for damage. Damage could also be mineral deposits that have effectively reduced the inside diameter of the pipe. If the pipes are clean on the inside, you probably have no real reason to replace them. IMHO.

Not the answer you're looking for? Browse other questions tagged plumbing pipe or ask your own question.

15
How can I tell if these pipes are gas lines or water lines?
10
How should I configure my plumbing with PEX?
3
Can/Should I Move These Pipes?
2
What are these pipes
1
New toilet already clogging?
4
Other options for an air admittance valve besides underneath the sink?
2
Cover up these water heater pipes?
0
Kitchen faucet occasionally doesn't allow water to flow
2
Do these pipes need to be replaced?
3
How to tighten / connect these pipes under the bathroom sink?