We've inherited an old house, and the original panel for the house seems to be a subpanel to the new service panel that primarily has electric baseboard heating, and two 20A circuits of receptacles in the kitchen. In trying to figure out how things are wired up, I found this panel on the back porch behind the kitchen.

The indicated 5-7 double 60A breaker interrupts the lights in several rooms downstairs in the house.

The fading words do not match completely match the switches, but it lists "5 Range", but there is no electric range in the house. The kitchen has a gas range plugged into one of the new panel's 120V 20A circuits.

Is this breaker reasonable for the lights? Or did someone hack the lights onto a leg or two of the 60A range circuit? 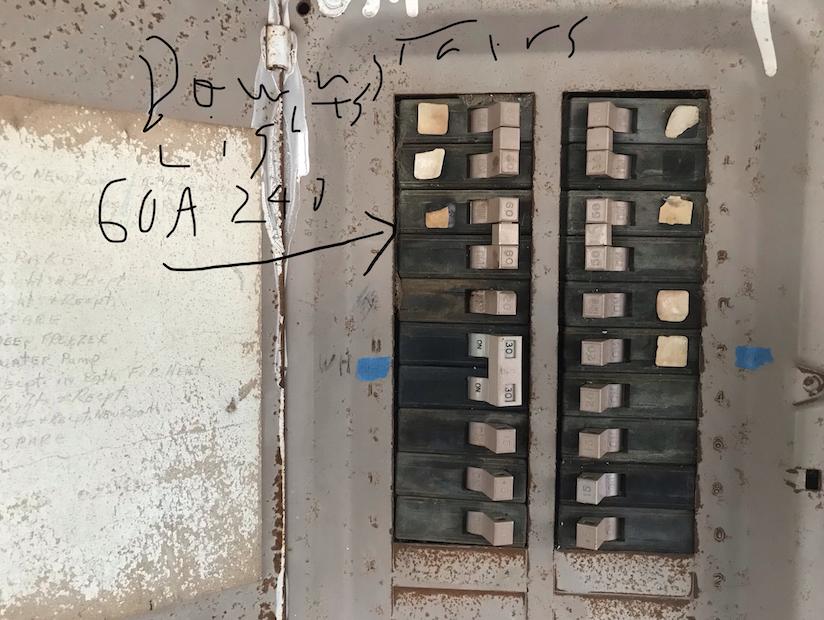 I peeked into this kitchen lights switch box, which is controlled by this 60A breaker, and the wires look like relatively new Romex 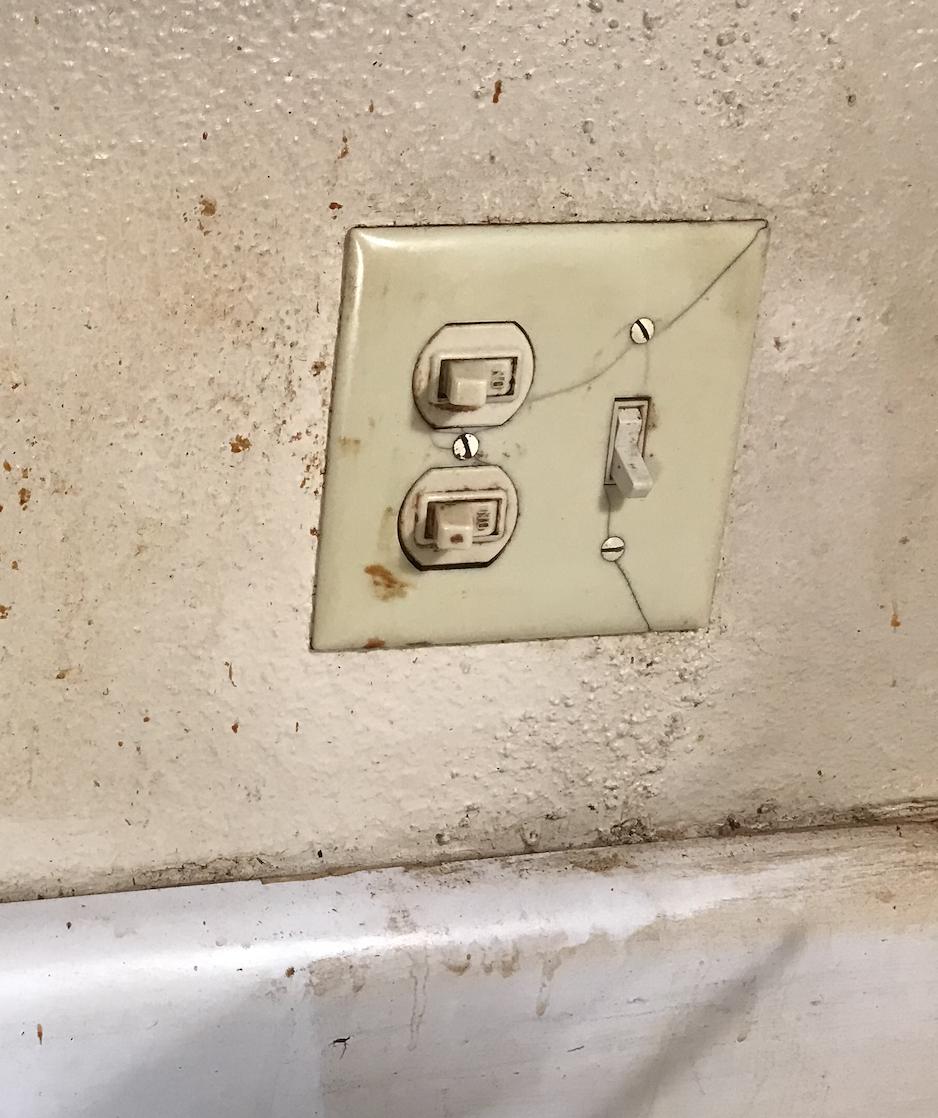 What that thing is.

When the house was built, breakers larger than 60A were prohibitively expensive (a bit like 400A breakers today). Now there is a "Rule of Six" - a facility can't have more than 6 handle throws to completely turn off power. So the answer for >60A services was to have multiple main breakers.

You are looking at a Split Bus panel. The top 8-12 breaker spaces (I suspect 8 on this panel) have their own bus fed straight off the meter. They are intended for up to six "main breakers" that actually power your large 240V appliances (dryer, range, A/C). But they also power one "Special" main breaker: called "Lighting Area" breaker.

Back when these panels were conceived, "Lighting" was the primary use for 120V circuits, hence the name. Anyway, this 60A "Lighting area" breaker powers the second bus in the split-bus panel -- spaces 9-20 I think. 240V circuits are also allowed there. 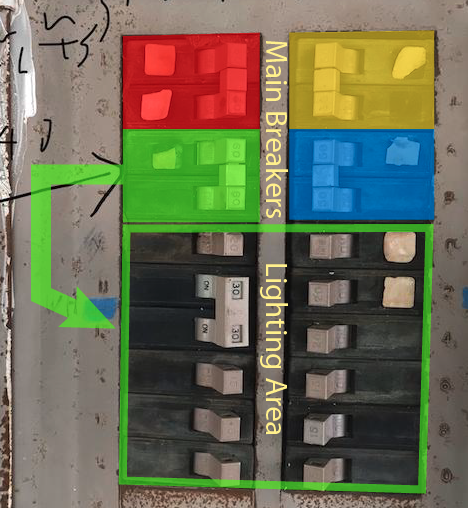 What else was done.

Split-bus panels are kind of dangerous. By design, they are oversubscribed - the main breakers add up to more than the service size. (yours has 60+50+30+30 amps of "main breaker area" breakers; probably on a 100A or 125A service back then). That was allowed because the Load Calculation at build time estimated the draw would be well within limits. The dangerous bit is upgrades. You're supposed to re-do the Load Calculation, but nobody ever does. So, "Rule of Six" main breakers have been banned.

You still see multiple breakers for cost reasons, such as dual 200A breakers on a 400A service, but they're not oversubscribed.)

Anyway, at some point, the homeowner upgraded. They installed a new main panel outside, and made the old split-bus main panel into a subpanel.

There used to be labeling indicating the Main Breaker area, Lighting Area, and Lighting Breaker. Unfortunately, that faded, fell off or was removed when this panel was subpanel'd. Removing the label that marked the 60A breaker "Lighting Area" was a Code violation. All breakers need to be labeled to indicate generally what they power (e.g. "northwest bedroom receptacles" never "Jane's room").

You didn't know what the 60A breaker did, so you turned it off - fair enough. Yes, it turned off your downstairs lighting. But it also turned off every breaker in the "Lighting Area" (spaces 9-20).

One of the eleven branch circuit breakers in this area would also turn off the downstairs lighting.

All of that is working as intended, and is a reasonable and legal configuration. You could even get it approved today in new construction, since the "Rule of Six" panel is being used as a subpanel.

Mostly, not worry about it.

Cutler-Hammer is a subsidiary of Eaton, and this is their flagship "CH" industrial-tier panel. It is the finest panel made for residences.* If I saw a new one in a Tesla assembly plant being used on 120/208Y, I would not be surprised at all.

The only thing that might make me think about replacing it is if a) there was severe corrosion inside the panel, or if b) the split-bus arrangement had frayed my last nerve, or c) I really wanted 6 more spaces. But swapping the enclosure (outer box) is a total nightmare - you must mark everything, untangle and snake each cable out of its clamp and knockout without damaging wire or markings - it's a PITA.

Instead, I'd make a regular habit of trolling eBay and vintage panel suppliers. See, panel manufacturers put many sizes of panels into a few "boxes" (enclosures). That's why you have four breaker knockouts with no breaker spaces behind them, that same lid was used on the 24-space. If you find a same-vintage 24-space panel that fits this same box, the "entire bus assembly" (everything which is not the outer box) unbolts with 3-4 screws. Snug all the wires on their breakers, pop the breakers off the bus assembly (without removing wires!), swap bus assemblies, put breakers back on. "Easy peasy".

If it was just the cover that was corroded, I'd just pull it off, prep and re-paint it. That color is called Cutler-Hammer Sandalwood, by the way.

* The now-obsolete Pushmatic was better, and that's coming from me, a CH "super-fan" lol.

It could be feeding a sub-panel that feeds the lights. That could be OK. You might not have found that sub-panel yet.

If it's feeding the light circuits directly, that's virtually certainly not OK.

Not the answer you're looking for? Browse other questions tagged electrical wiring electrical-panel circuit-breaker or ask your own question.

3
Hooking up a 50A hot tub breaker to a 60A subpanel
1
Loads for sub panels from 150A split-bus main panel
0
Best choice for sub-panel and circuits for basement
0
60A subpanel service - when does it trip?
2
Is there is a Standard on how much main service panel / main circuit breaker amps should be?
0
What to put in 60A GFCI breakers in Subpanel?
2
Using an older 200A breaker panel on a 60A feeder circuit from house?
0
Sub Panel in detached 10x10 bldg(welding shed)
2
Does my electrical service have capacity for an 80A EV charging circuit?