Background: I have zero plumbing experience, hence the sanity check. Everything I describe here is brand new to me.

My house is in a hilly area in Silicon Valley. All of the houses in this neighborhood have drains distributed around the yard, which drain to pipes under the sidewalk just above a storm drain. I only moved in recently; the house is 20 years old. A couple weeks ago we had a historic storm, and water collected deep enough that my house was very close to flooding. The drains in the yard did not really appear to be taking in much water, and the pipe at the street was putting out only a trickle. But I ended up being saved by luck; the drain in the front yard closest to the street was also the lowest, and was operating in reverse, with a torrent of water coming out of that drain and then running across the surface of the front yard toward the street, ironically dumping over the sidewalk directly above the pipe it was supposed to be going through. The next day I poked a stick up that pipe, under the sidewalk, and felt resistance... so I dug there.

Here is the aftermath of what I found: 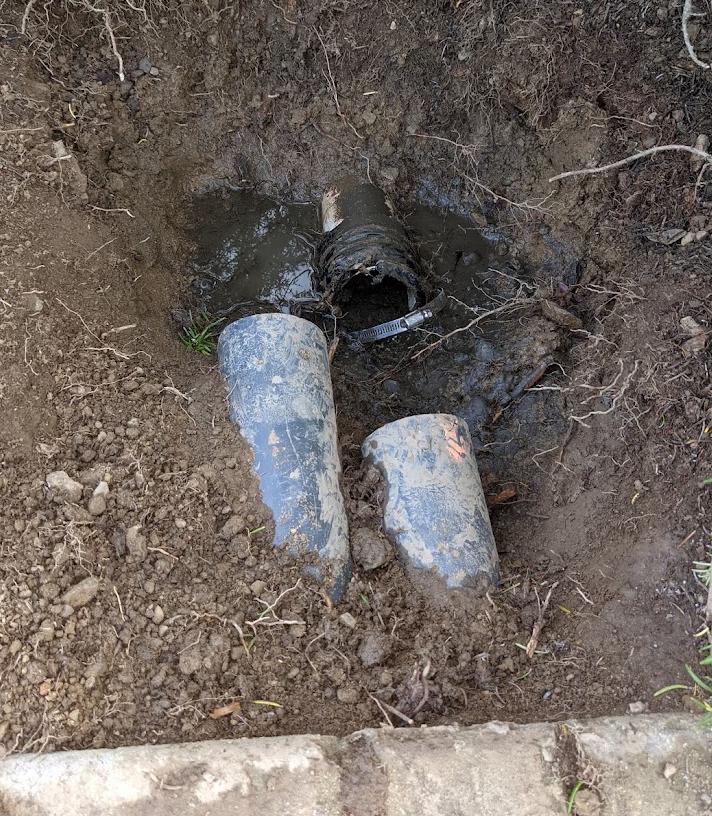 The white pipe is coming out of the yard. The right black pipe is going under the sidewalk (the left black pipe was unused, which is normal in this neighborhood). They were connected with corrugated pipe and hoseclamps (one end still barely visible in that photo after I destroyed the middle section), and the corrugated pipe and the entire black pipe were filled with a giant rootball that had entered under the hoseclamps:

Reconnecting the pipes without another cheesy corrugated section proved difficult. There was both an elevation and a slope mismatch. The yard side was lower and sloped UP maybe 10deg. The street side was higher and sloped DOWN maybe 10deg. Here is what I ended up with: 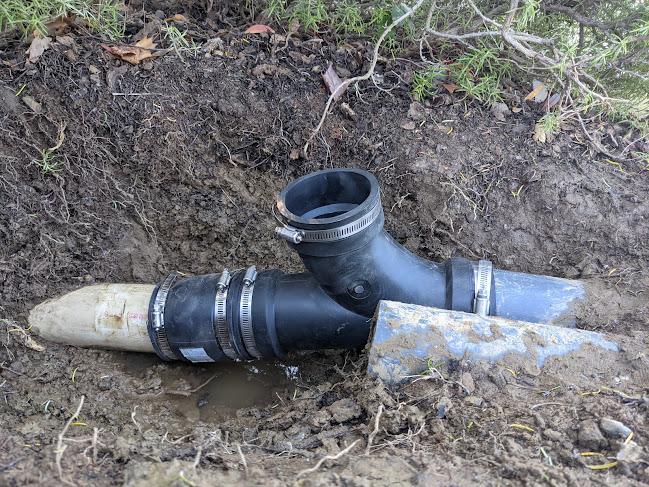 I used two Fernco 3" flexible pieces, a simple straight one, and also a cleanout tee. They are connected with a 3" long piece of ABS. The cleanout is a nice bonus, but the real win here is that the length of that piece gave me even more flexibility for the alignment problem.

Here is the main question though. The white pipe is some weird thing which I believe is schedule 30. Incredibly thin-walled (0.070"), so it amazes me it hasn't had roots penetrate it yet. But its OD is 3.25", compared to the Fernco IDs and the black pipe OD (which are all 3.5"). At first I was worried this would be a problem. But:

(1) I ran a simple test to see if the rubber would contract nicely down to that smaller diameter. I overinserted the straight Fernco coupling onto the white pipe (so that I could see the mate more clearly) and cranked down the hose clamp. The result: 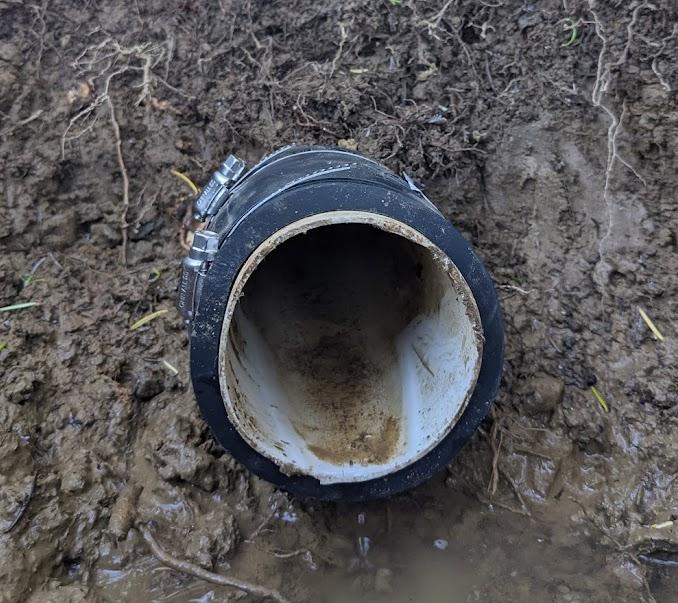 While it does look like there are small gaps, this is only because the rubber bows up away from the clamps. I am pretty convinced that at the clamps, there is a very good seal (and flushing 50gal loads down the drain after full assembly seemed to confirm this). The circular shape of the cross-section is distorted a bit which doesn't seem ideal, but I think this may have more to do with the thin wall than with the diameter mismatch.

(2) Ironically, the looseness of the Fernco <-> 3.25" mate was kind of critical in allowing me to actually assemble this entire mess with the huge starting misalignment. I don't think I'd have been able to get it all together if the white pipe had 3.5" OD. Basically I was able to overmate the entire "patch" assembly onto the white pipe with a pretty crooked alignment, which allowed me to get the other end of the tee slid back onto the black pipe and tighten that clamp, after which I tightened the crooked clamp onto the white pipe, which slowly straightened itself out, leading to the desired bend in the flexible coupling.

My major concern is if there is any issue with using the 3.5" ID Fernco coupling with the 3.25" OD thinwall pipe. I want to prevent future root invasions.

What you assembled will be a good match for the conditions and allow for a clean out. You are correct the fittings don’t fit well on the drain pipe because of its smaller diameter. Since there were roots in the area one thing I have done is pack rock salt around the patch (yours is well beyond what many contractors would have done) the salt will prevent roots from immediately trying to get back in and is a natural way without harsh chemicals. It won’t take a lot of salt a couple of handfuls really helps. But what you have should work fine.

Not the answer you're looking for? Browse other questions tagged plumbing pipe drainage irrigation or ask your own question.

5
What should I keep in mind when altering the drainage around my basement?
4
How much drainage pipe should I bury for a new downspout?
1
Backyard Drainage Issues
2
Pros and cons of coupling vs. threaded when transitioning from copper to PVC
2
Front yard flooding, drainage help needed
0
Digging 4-foot drainage trench
1
Can I replace a portion of a furnace exhaust pipe by using two couplings?
0
How best to connect a second gas run to a meter
0
How to connect PVC to galvanized pipe