I have 11V between neutral and ground, how can I isolate the problem and solve it?

I am in Indonesia and the local electricity company is bad and there is no actual electrician around. People just connect wires together.

So with this in mind I recently ripped out my wires (unearthed) and put in new earthed ones:

So I have a fault but I am not exactly sure where.

The earth rod has not been tested using any tool, but it's rainy season and the ground is extremely wet right as I speak, so it doesn't seem like there would be a problem here.

Can anyone suggest how to resolve?

Edit2: I found some info on Youtube which seemed fairly credible, and checked my own meter. https://www.youtube.com/watch?v=ImdN08dHiYQ

This is the diagram on YT 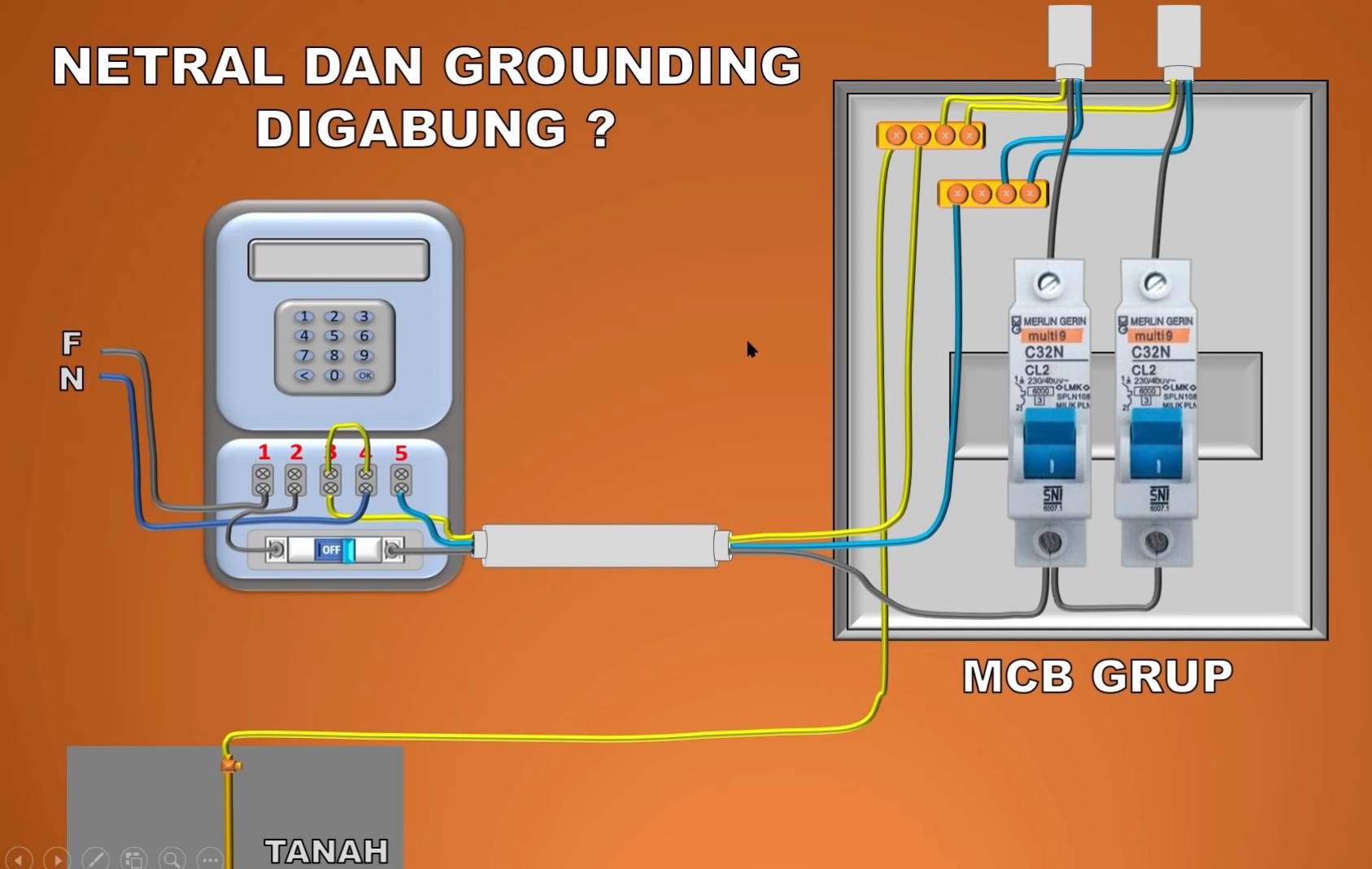 You can see there are five terminals.

Here is my meter: 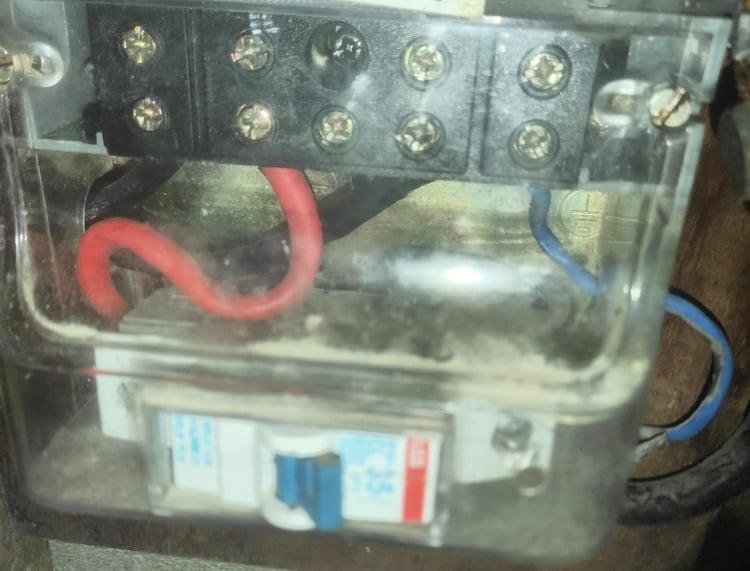 The labels are not clear in my photo but they are printed on the connector: 1 (phase in), 2 (phase out), ⏚, 3 (neutral in), 4 (neutral out). So the bottom ⏚ screw is supposed to be connected to a ground rod, but there was never one installed, and then the top ⏚ is supposed to bond to the top screw of neutral in.

Now, according to the video if the ground had been bonded at the meter (which is impossible as no ground exists there), then if I additionally bond at the consumer unit, this would cause the tamper detection on the meter to trip and it would stop working.

So it seems like I have three possible solutions:

This may be the key. In the US (different system, but hopefully close enough), the neutral and ground are supposed to be bonded by connecting them in one and only one place. That can be near the meter ("meter main") or in the main panel. (In years past, there were subpanels with neutral and ground bonded as well.) Because of the need for the bonding in only one place, many panels will ship without neutral bonded to ground. When that is the case, there is normally a place for a screw to connect the neutral bar to the case, or it can be done by connecting a wire from the neutral bar to either the case or the ground bar. Instructions for the panel should describe the approved method.

Without bonding, neutral should be close to ground but will likely not be exactly at ground, and an 8V - 11V difference would be quite normal.

Bonding is important because if there is a short from hot to ground then you want to make sure current can flow properly in order to trip the breaker.

What's up with all the voltage drop?

So you are (not surprisingly) having 14 volts of voltage drop (so you say). The hot and neutral are each having half of the voltage drop, so 7V each. Thus I would expect neutral to rise 7V above earth when experiencing 14V drop.

The cornerstone of your system's protection is the RCBO

If the RCBO is tip-top, all manner of other electrical sins can be tolerated. Which would explain why your country's code enforcement is so slack; the working RCBO removes most of the danger!

Bypassing it is madness, but very typically we hear this:

"I tried leaving it connected, but it trips immediately when I do. I cannot find any way to make it not trip immediately. Surely it is broken?"

The answer is always "No, it is NOT broken! There is an actual system fault, a real residual current leak: the very thing it is designed to detect - and it is tripping because it is doing its job correctly. What you actually need to do is hunt down and eliminate that fault."

And the response is always "Maybe, but a) I don't know how to do that, and b) I don't care because I don't understand the risks. Ignorance is bliss and I just want my power back on".

But bypassing RCBO on a known-faulty system is sheer madness.

So it would really be much better to raise your skills so you can fix the root problem. You can narrow it down by disconnecting circuits either one at a time or "half at once" - note to disconnect a circuit you need to disconnect both live AND neutral. Because the RCBO cares about leakage from neutral to earth, and that will trip it too.

Start by unplugging all your plugged-in loads. If it holds, plug things in one at a time, and wait to see if it trips. When it trips, it was the last thing you plugged in.

Then, have that appliance repaired or replaced.

If your refuse to use whole-house RCBO, consider many RCDs

People laugh at Americans for having many individual RCD's (GFCIs) on a per-circuit or even per-outlet basis. But you are yourself experiencing the method to our madness. In America when a GFCI trips, it only takes out that one circuit or receptacle, not the whole damn house.

So you could try that. Replace each of your individual branch-circuit breakers (or even receptacles, if that option is available) with appropriately rated RCD devices. Now you will only lose the faulty circuit instead of the whole house.

This also gives you the option of removing well-earthed but GFCI-tripping appliances from GFCI/RCD protection altogether. For instance we don't protect furnaces and refrigerators, which are notorious for tripping GFCIs, because it is a well-earthed appliance with the electrical parts inaccessible.

Your earthing system needs to be absolutely tip-top

And European-style installations are notorious for bad, bad earthing - it is generally geared for European apartment buildings, where relying on the utility to "earth the neutral" is not unreasonable.

When you're spread out on a property like an American homestead, I recommend the American viewpoint of earthing:

And then, the most important part: There must be only one earth-neutral connection. If you had two, then neutral current would detour via the earthing system. Generally we put this at the first disconnect point past the electric meter. However in an installation where there is a long feeder from the meter and that does not have an earth wire, we put this at the first place there is an earth wire.

If you do not have an earth wire between meter and first building, then you will need to do something like this. 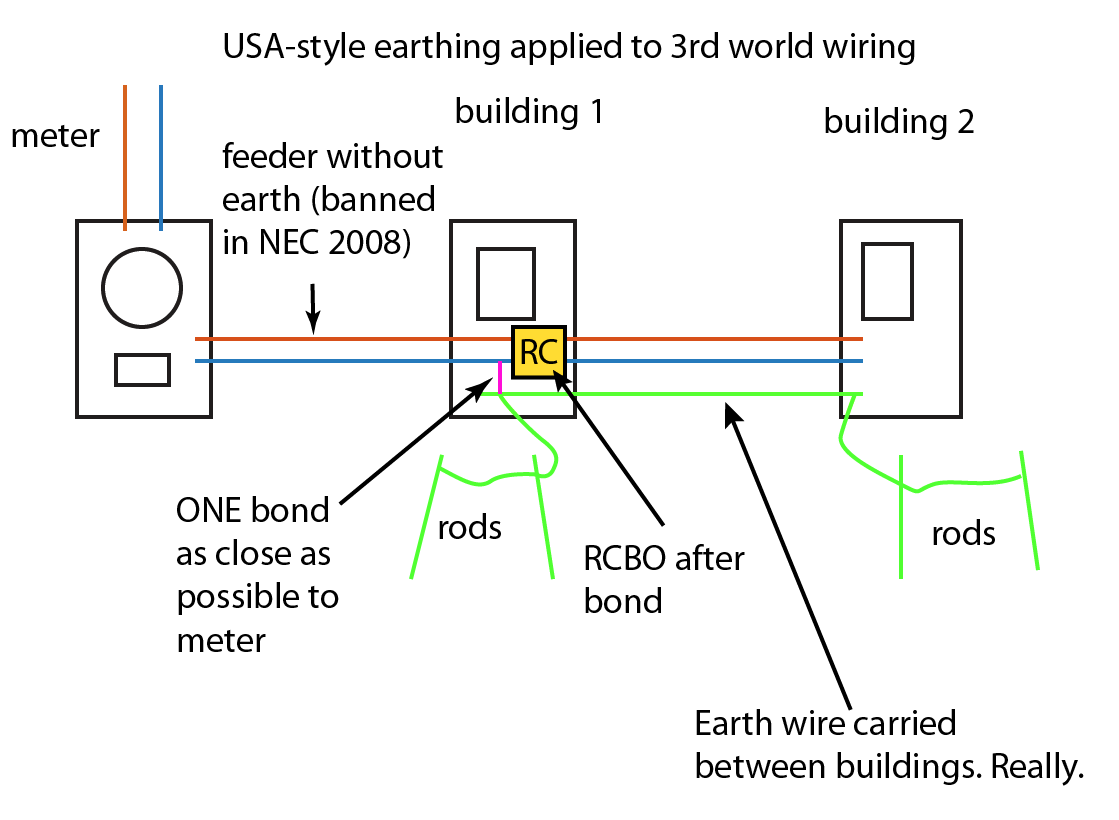 Not the answer you're looking for? Browse other questions tagged electrical grounding grounding-and-bonding or ask your own question.

0
Bonding Neutral and ground in a service panel
2
Existing 3 wire service feed to sub panel: bonding grounded neutral and ground bars?
1
Subpanel or not? Neutral and ground bonded?
0
verify if the Ground cable is connected to Neutral cable
3
How can I connect a new ground rod?
3
Understanding ground to earth and neutral, trying to make my home safe
0
Is it normal to not have an OL between ground and neutral?
0
Lighting fixture: 2 live, 2 neutral, no ground - Is is okay to have the 2nd neutral used as a ground?