Mark an outlet as not GFCI protected?

My garage has a workbench installed by the previous owner. Just above the workbench are a light switch and a set of four outlets. They originally looked like this (this is a lazy visual diagram, not a complete wiring diagram).

There are two pairs of duplex outlets; the duplex on the left is a split duplex with the upper outlet controlled by the switch and the lower outlet unswitched. An overhead fluorescent lamp is connected to the switched outlet.

All of these outlets were properly grounded but none of them were GFCI protected (I used a tester to verify they were also not downstream from another GFCI).

I replaced the right duplex with a GFCI, and flipped the left duplex upside down to follow the convention used in other rooms that switched outlets are upside down (I updated the wiring to keep the upper-left outlet as the switched outlet):

I did try connecting the hot side of the bottom-left outlet to the Load side of the GFCI, but of course the GFCI doesn't like that and would immediately trip as soon as I powered on any appliance plugged into one of the three protected outlets. From what I've read it sounds like it's not practical to have a switched outlet downstream from a GFCI.

What's the best thing to do here? The GFCIs always come with a bunch of stickers for "GFCI protected", "No equipment ground", etc, but they don't come with "grounded but not GFCI protected". In this case, I worry that because the right duplex is a GFCI, an average person might reasonably assume the left side is GFCI protected (if they know about downstream protection). Should I make my own sticker that says "Not GFCI protected"? For the moment, I've just put one of those plastic plug covers into the bottom left outlet because I don't think I'll ever actually need to use it and that way I will remember that it's not protected.

I'm not worried about the fluorescent light not being GFCI protected because it's hanging from the ceiling and there's no risk anyone would ever be touching it while it's powered on.

All you need to do is pair the hot & neutral properly.

My hunch is that you moved hot to LOAD but didn't move neutral, but there are some other possibilities as well.

In any case, the solution is simple:

That's it. The GFCI won't know or care that there is a switch involved.

This is the solution I ended up using (most of the credit should go to Harper since it's based on his suggestion):

I replaced the switch with this combo unit which has a paddle switch and a GFCI outlet.

I wired the back so that the outlet is powered by the switch. No other outlets are wired downstream of this one. The fluorescent light is now plugged into this single switched GFCI outlet.

I capped both ends of the wire that originally ran from the switch to the hot side of the switched outlet. I replaced the split duplex with a non-split duplex downstream of the duplex GFCI. The final setup looks like this: 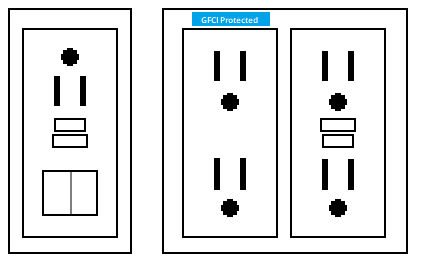 As Harper pointed out, this setup is great because the fluorescent light is on a separate unchained GFCI. If a power tool trips the righthand GFCI, the lights won't go out.

I gather you've always dealt with electrical devices as acting on the hot wire, but just "passing through" the neutral wire and not acting on it. So, you get to GFCIs and think "more of the same".

Not at all. A GFCI device is comparing current on the hot vs the neutral wire. If they are equal, there is no problem. If they are different, that indicates a ground fault (or a wiring fault). This requires thinking about neutral as an important current path!

Your method failed because you tried to draw hot current through the GFCI, while returning neutral current through the existing pathway that bypassed the GFCI. So the GFCI only saw current moving in one direction, registered this as an imbalance, and tripped of course.

Once you understand the need for GFCI devices to see both directions of current flow, this becomes straightforward.

However, you have a second problem that I don't like one bit. You only have one switch, so if you get the switched receptacle properly fed off the GFCI's "Load" terminals, the overhead lights are too. That means when you trip the GFCI, you are in the pitch black (with a saw blade still spinning etc.) But there's an answer to that.

"switch" to a GFCI switch

There's a simple exit to this problem. Replace your plain switch with a GFCI Switch.

This looks like a GFCI receptacle, except with no sockets, and with "Test/Reset" replaced with "Off/On". And it is rated for daily switching duty (i.e. to be cycled tens of thousands of times). 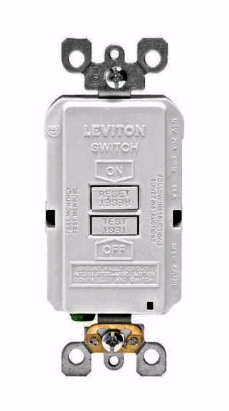 Your acceptable and code legal options don't include marking it as non-GFCI protected, since it's a receptacle in a garage.

Properly wire it and switching should not be a problem (all my light switches are on the load side of a GFCI, and they work just fine, including the ones that switch receptacles for plug-in lights. That GFCI serves only lights, so I'm not too concerned about being left in the dark under normal circumstances.) If hot and neutral both come from the load side of the GFCI, there's no reason it should trip unless there's a ground fault in the switch or light.

If you do not want to have it on the GFCI, that can be done, but you cannot have a receptacle. You CAN have a hardwired (junction box, wire nuts) connection to a light (or lights.)

If the switch wiring is a switch loop then you can make all outlets gfci protected. This will be the least confusing option. Because then the entire thing is gfci protected and one of them happens to be switched.

Not the answer you're looking for? Browse other questions tagged receptacle gfci or ask your own question.

0
How can I add a GFCI receptacle on a circuit with split receptacles?