Self-built shed door warping: can it be fixed?

I recently got into DIY and one of the first projects I undertook was to rebuild the door and frame for a small outdoor cupboard / shed on our balcony. Right from the start, I couldn't quite get the door to be straight, but it wasn't off by much. I've used European oak boards with groove and tongue, 20mm thick. I added 20mm thick and 110mm wide oak boards to the back as a frame in a ledged & braced fashion. I left a bit of space between the interlocking boards and made sure not to glue the frame to the front, using screws only. I applied three coats of clear wood stain to all of the pieces of wood used. I did not use drill larger holes for the screws than the screw diameter, as I was not aware of this advice prior to building the door. Now, I would be worried that enlarging the screw holes will make positioning the door to properly fit in the frame difficult. As it is made of oak, the door is already very heavy (for a next time, I'll consider something more light-weight!). 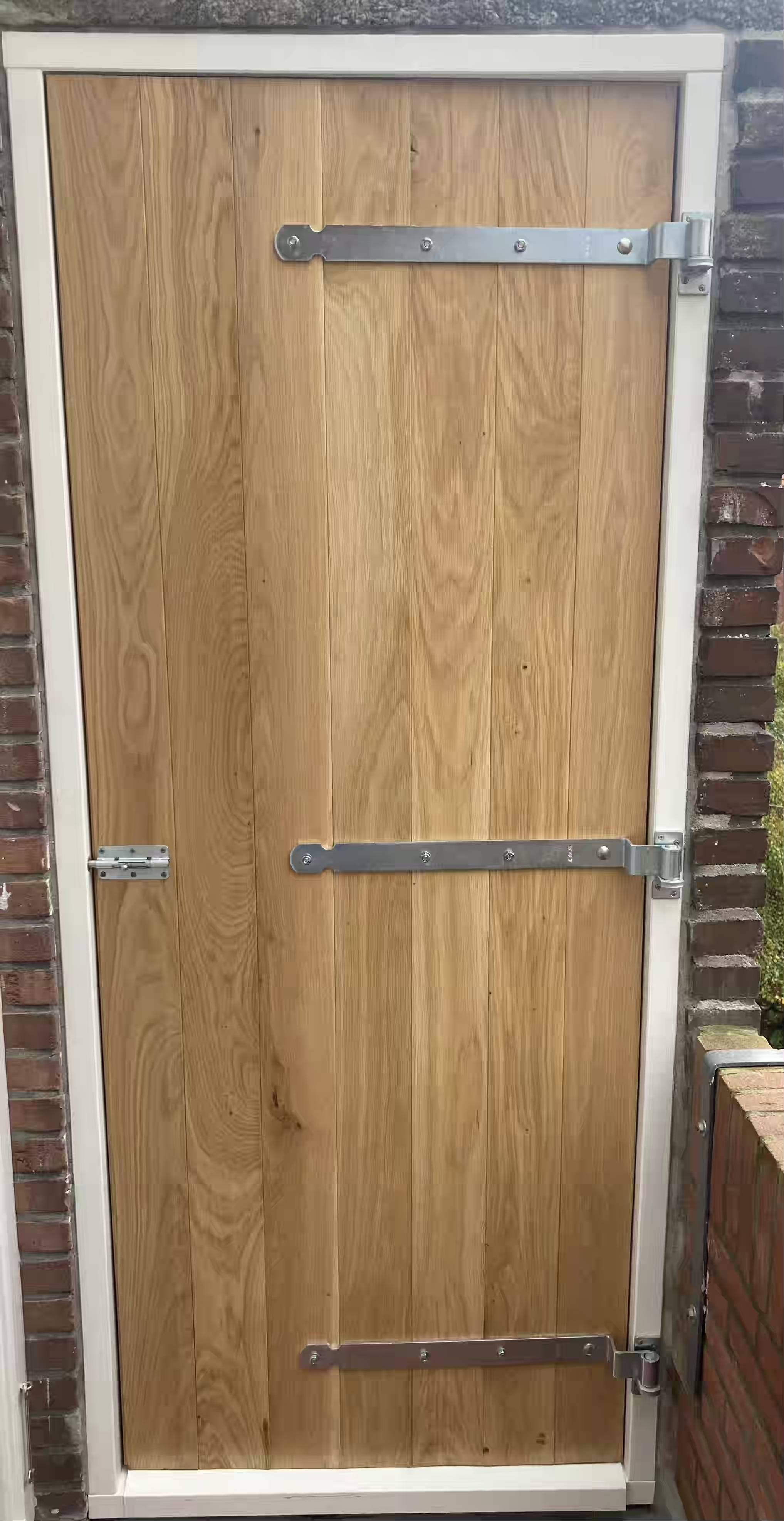 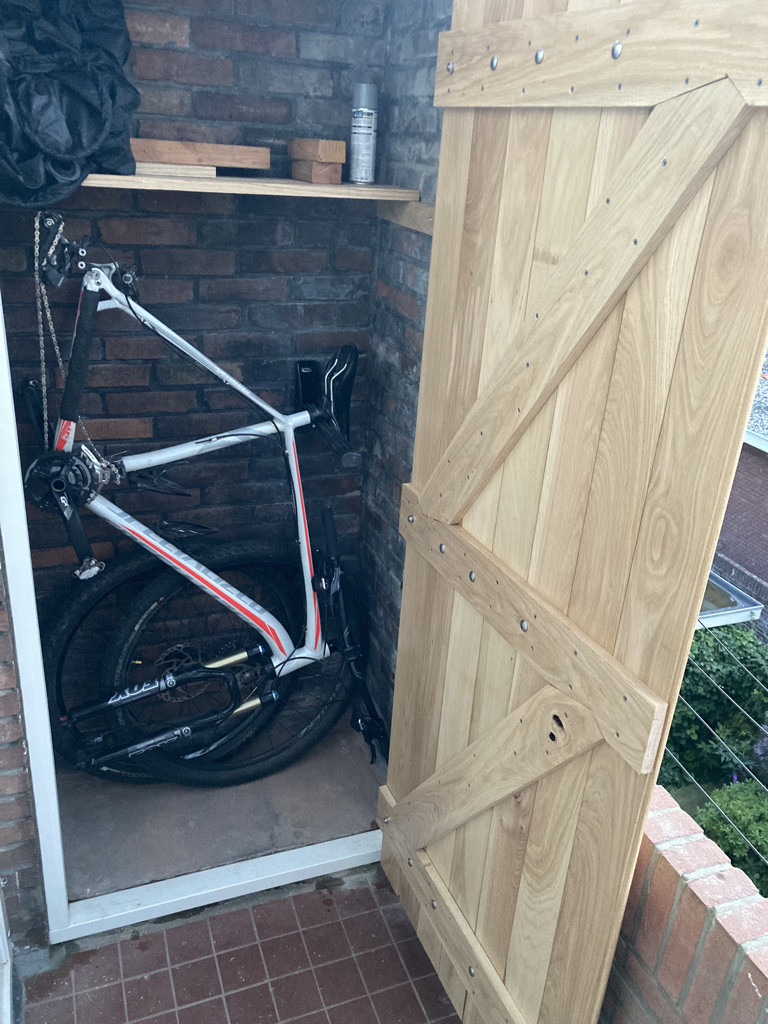 With the weather turning colder and wetter, I've noticed the door has been becoming wider: I've had to plane of a couple mm along the side to make sure it can continue to open and close. More problematically, the door has also started to warp to the point that the top left corner is almost sticking out from under the frame. It remains functional, but I specifically tried to build the frame and place the door within it so that rain water would not be able to drip on the top of the door or get in the shed proper. If it warps more, this won't be the case anymore! 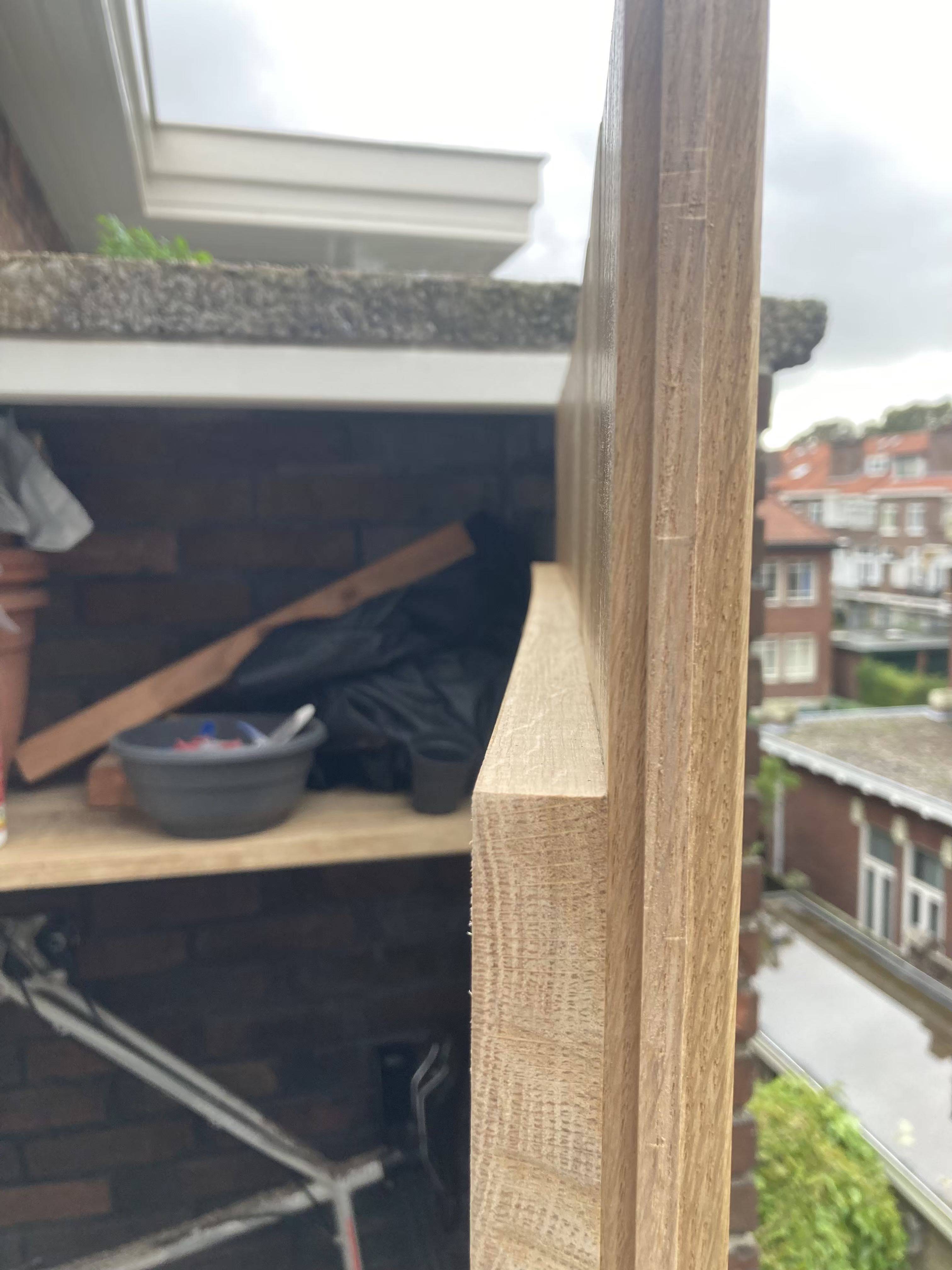 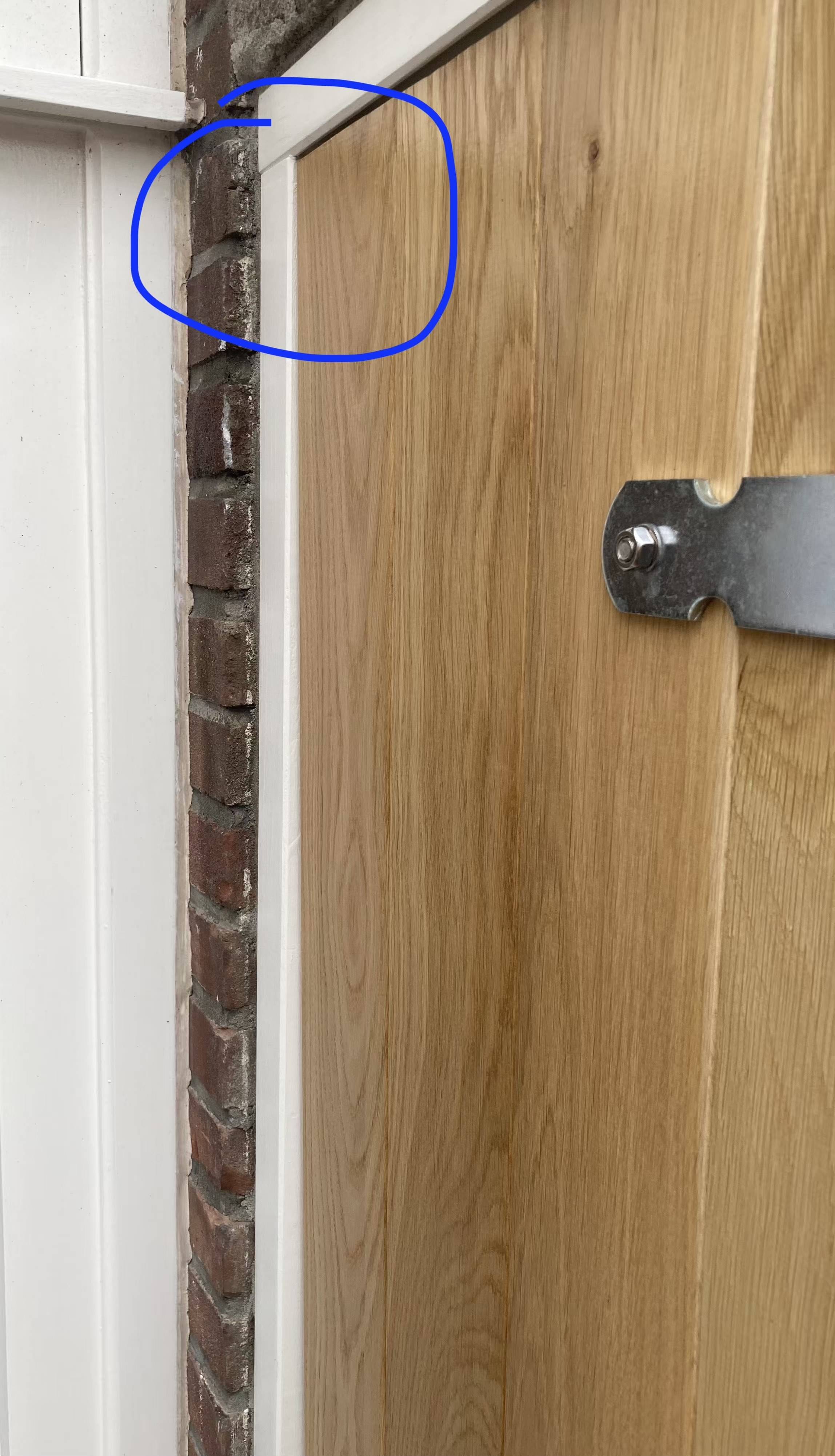 I've enjoyed learning about simple carpentry work, but hope I can avoid having to make a second attempt at this door in the near future. So my question is, do you have any advice on how I can manage the warping or what I can do to improve the door design? I've attached some pictures for greater clarity.

Any advice offered would be much appreciated!

Thanks and best wishes from the Netherlands.

Honestly, it looks like that horizontal brace in the penultimate picture has bowed and is pulling the door panel with it, as shown by the thin red line at the top of the modified image, below. I would suggest unscrewing it from the door and laying it on a flat surface to see how bad it is. I would venture to say that as you release the screws the door panel will straighten back up.

If that horizontal brace has in fact bowed, I would suggest that you replace it with two thinner pieces. As is illustrated by the green lines, the grain of the board is curved inwards on this brace. If you replace it with two thinner boards, have one with the grain curving in and the other with the grain curving out (as demonstrated by the two very poorly drawn light blue lines). This way, each of the horizontal brace's natural tendency to want to warp will, more or less, offset the other's and it will stay mostly flat. 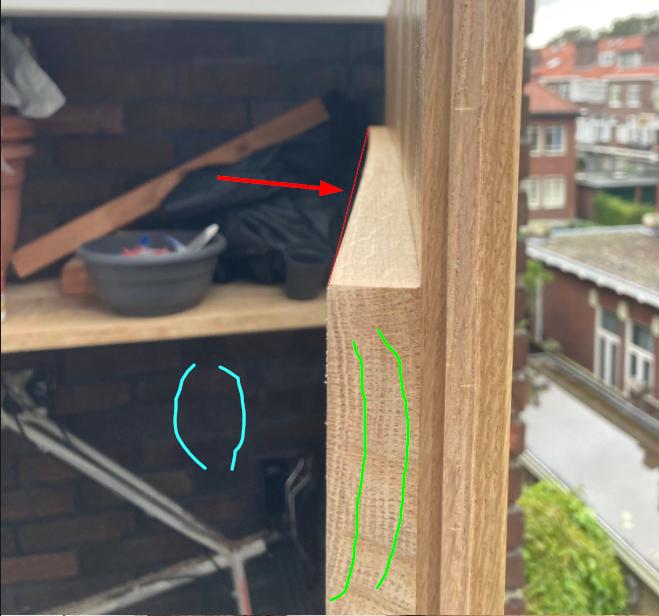 If you, or a friend/maker space/whatever have a bandsaw, you could install a wide, "resaw" blade and resaw your existing board. By cutting it in half vertically (as it's shown in this picture, you can reuse this particular board instead of having to replace it. As you cut it, some of the bend may flatten out naturally as the tension in the board is released. Even if the two pieces don't completely flatten, you can, once you've resawn it, flip one piece so that the curve of the grain goes in the opposite direction on the two pieces, then glue it together that way to make one board out of it again. I would suggest that you'd want to set it on the flattest surface (not necessarily level, just flat) you can find and use a lot of weights as your clamp force. When it's dry it will have taken on whatever shape it was bent to as the glue dried, so you do want this to be pretty flat.

Additionally, you will want to slightly oversize the holes in all the horizontal braces to allow for expansion & contraction of the boards that make up the door slab. You want to make clearance holes (i.e. a bit that's just a fraction larger than the screw thread diameter) so that the threads do not engage with the brace board. Once you've got the hole drilled straight through the board, rock the bit side-to-side (along the length of the brace board) to make it slightly oval shaped.

As you tighten the screws back down, the head of the screw will clamp against the back of the brace, while the screws grab into the slab. This will allow the screw to slide ever so slightly within the brace board as the boards of the slab expand and contract as the temperature changes.

You may also want to consider slightly oversizing the holes in the vertical boards of the slab where the hinge strap bolts go through. Again, you'll want clearance for the bolt and enough room for the slab boards to expand as they're clamped between the metal hinge strap and the horizontal brace on the back.

The classical approach to this would be that you have 7 face boards. The center one gets holes that just fit the screws, the ones to either side get small slots (width-of-door-wise) and the outer ones get the longest slots (width-of-door wise) so that the boards are more free to shrink and swell without forcing the bracing to bend. Or, the one at the hinge side gets the tight holes, and the slots just get longer towards the latch edge (because it's the easier one to plane as the door swells, until you have planed it to fit at its maximum wetness and width.)

You could potentially make those slots one at a time without disassembling the door, using a small chisel or a router. remove one screw at a time, slot the hole it was in, replace it, repeat.

A possible "quick mitigation" for rain getting on the upper corner would be to move your latch higher, to force the upper left corner in more.

Another option would be to extend the upper trim to make more of a rain-shedding lip, preferably including a detail (a drip edge, or drip cap so called) to prevent rain running back along the bottom of that trim into the door area, which your present trim appears to lack. The groove near the front edge helps force the water to fall off, not run back to the building. There are also similar metal or plastic flashings that serve the same function, while not looking like the solid wood or plastic version shown below. 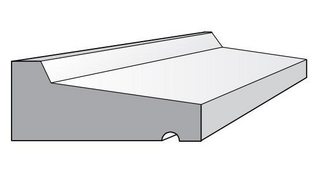 Those are typically 2.5-4 cm projection from the face of the building.

Yes Sure, To straighten warped wood, and then soak in water. Or if you can't submerse them, put a wet cloth on the inside of the warp curve, and soak until straight. And, once it is finalized then seal the grain against future water and the wood glue will stay in there and never warp again, stronger than the piece would be originally.

Not the answer you're looking for? Browse other questions tagged wood doors woodworking shed or ask your own question.

28
Why does my shed door expand/shrink?

5
Is there a tool I can use to cut out the templates for door hardware?
5
How do I prevent doors on a media cabinet from sagging?
2
How can I make an exterior door?
0
How to make the doorframe not hideous
2
Hanging a new shed door on a frame that is not level
1
Building a Workstation (Piano Keyboard) PC DESK with MDF
3
Help cutting/squaring floor joist for shed
0
Where to put front facing shed door hinges