How to improve lighting design?

Unshaded lights bother the heck out of me so I hesitate to install recessed lighting. But I need to do something. We moved into a house with lower ceilings than I'm used to. In other houses we just put a simple ceiling fixture in the center of the ceiling and I was happy. In this house that isn't working because frequently someone else stands in line with a ceiling light -- for example, I'm sitting in the dining room and someone else is standing about halfway between me and the living room overhead light, and that drives me nuts. Should we put a floor lamp in each corner? I just don't know how to light the spaces without being bothered by what feels like glare when I look at the other person.

Related to this, the kitchen has a fluorescent fixture in the middle of the ceiling, and if I'm in the dining room, and someone is standing between the kitchen light and me, but still in the kitchen, s/he becomes a silhouette with the face in shadow.

Should I run a string of lights in small paper spheres along the edges of the ceilings?

Can you think of anything that would work better for me than the current arrangement?

As discussed in the comments, cove lighting is one alternative that lights the whole room from the edges instead of the center and without having a hanging chandelier (easily blocked if the ceiling is relatively low) and without using ordinary recessed lighting.

I easily found a tutorial from Family Handyman which covers a lot of the issues involved.

Here is another example with some good pictures.

As far as how much light, the key is lumens. Measure the amount of light output, not the power input. The amount you need will vary depending on usage and personal preference. One guide I found suggests 10 - 20 lumens per square foot for a bedroom and 70 - 80 lumens per square foot for a bathroom. In general, more is better, provided it can be controlled appropriately. For example, a bathroom generally needs a lot of light and a bedroom doesn't. But a bedroom that is turned into an office might need more light, and many people like to have a minimal amount of light in the bathroom at night so that if they need to get up at 3 am they aren't blinded by the light.

One way to start is by looking at existing lighting. Calculate the total lumens in a room (add up existing bulbs/fixtures) and then shop for more, less or about the same total lighting in replacements. That's what the whole "watts equivalent" mess is trying to do, but it doesn't really work all that well.

As far as floor lamps, I recommend against them except if you are in a rental (because then you can't change anything without landlord's permission, etc.). They are tripping hazards, take up valuable floor space, light the room very unevenly (compared to a center lamp or multiple recessed lights or cove lighting around the room) and older versions (especially halogen) were notorious fire starters. Many years ago when I moved into my house, one of the very first things I did (paid someone, I had no idea how to do it myself) was to install ceiling lamps in the bedrooms to replace switched receptacles, and that was money very well spent.

Glare when looking at a light source is proportional to its lumen output divided by its surface area. A small bright light like a GU10 bulb makes a lot of glare, because all the light is emitted by a tiny area, so that area appears extremely bright if you look directly into it.

If you don't like glare, but want a decent amount of light, then:

For example, if you have a ceiling fixture in the kitchen and you really don't want to look directly at it, then perhaps you can replace it with indirect lighting. 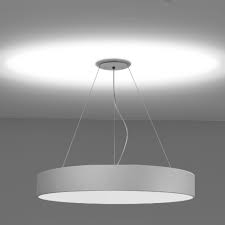 If you prefer light to be above so they're not behind someone, then putting floor lamps in the corners of the room might not work, likewise wall fixtures are usually at eye level. You could try with indirect lamps aimed at the ceiling, though. 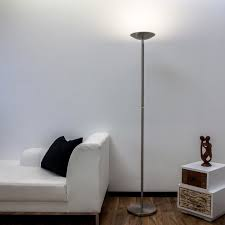 If you have low ceiling and you want a ceiling fixture that is large to avoid glare, you can use LED panels. 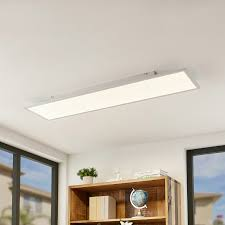 If the glare from fluorescent lighting bothers you that much, and if you're above 50-60 years old, I'd suggest you get your eyes checked for cataract. My father just did the operation and he's delighted with the results.

Not the answer you're looking for? Browse other questions tagged lighting ceiling or ask your own question.

2
How do I prevent shadowed areas when installing recessed lighting in a vaulted ceiling?
1
How to run electrical wire in concrete ceilng?
3
Where to locate light switches?
1
Kitchen dimmer dims lights in adjacent room, but not always
0
How can I wirelessly duplicate a lighting switch
1
How directional is LED strip lighting (with a diffuser)?
1
Best way to wire for recessed lighting
0
Kitchen light switch malfunctioned