Note: I'm creating and immediately answering my own question because I wasn't able to find documentation of this solution online.

My condo is equipped with a FirstAlert 7010BSL smoke detector (technically mine is a 7010BSLA model; it appears identical to the 7010BSL). This model of smoke detector is hardwired (i.e., it uses mains/grid power) but also takes batteries to provide power during an outage.

My detector recently started beeping periodically to indicate that its batteries were low. I took out the old batteries and put new ones in, but the beeping continued. This is apparently a common problem with FirstAlert smoke detectors as the company has a dedicated help page for it.

Following the instructions on that page, I performed the following steps:

After this process, the detector continued emitting the low battery warning.

The problem was that, when I initially removed the old batteries, I damaged one of the terminals within the battery drawer. All the terminals are thin metal plates that deform easily; there are no spring terminals.

When I repeated the steps described above but bent the terminal back into shape before inserting new batteries (between steps 4 and 5), the detector stopped emitting the low battery warning.

For reference, here's a photo of the damaged terminal: 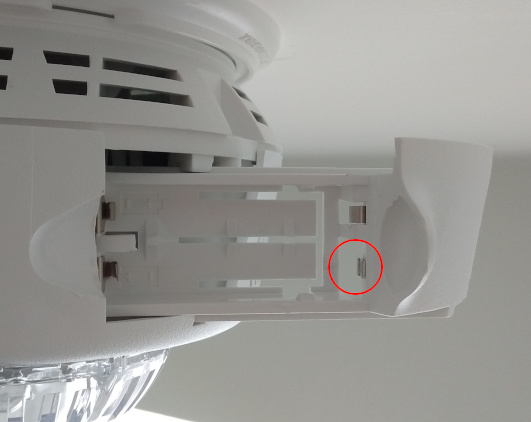 I damaged the terminal because the batteries fit very snugly within the battery drawer and I wasn't aware that they're supposed to be removed by pushing on plastic tabs on the back of the drawer. After being unable to remove them by hand I pried them out with a screwdriver, which damaged the terminal.

Use of the tabs to remove the batteries is described in the manual (excerpt below), but I didn't have a copy of it until I found it online later.

Hopefully this helps other people who also encounter this problem!

Not the answer you're looking for? Browse other questions tagged smoke-detectors battery or ask your own question.

4
Continue to use hardwired smoke detectors?
1
Smoke detectors & backup generators
1
Are all of these smoke detectors required?
2
How can I open this smoke detector to change the battery?
2
How can I lift the latch of the battery compartment in this smoke alarm detector?
0
Smoke detector wiring - black wire in 3 wire appears to be damaged. Can I use power from AFCI circuit to power but use red wire to interconnect?
1
Hardwired Smoke Detectors, go with sealed battery units or unlocked with lithium 10 year batteries
2
Signalling a smoke alarm from interconnected (hardwired) detectors to an alarm panel
7
What is this electrical fixture above a natural gas fired forced air furnace?
1
A spark while installing a smoke alarm