What is the purpose of the hole in this drawer?

Our 1953 built house has a built-in cabinet and shelving unit in the living room. One of the drawers was made without sides and has an unusually shaped hole in the bottom (to the point where there is essentially no bottom). The cabinet beneath this drawer has a power outlet that has been there long enough to be a two-prong polarized outlet. The shape of the hole is such that it was pretty clearly intentional, and appears to be shaped to mount something. Any idea what the purpose of this drawer is? 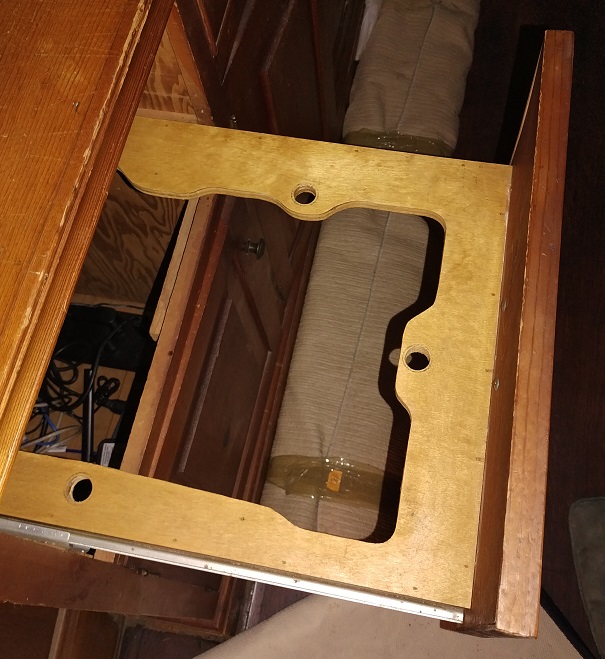 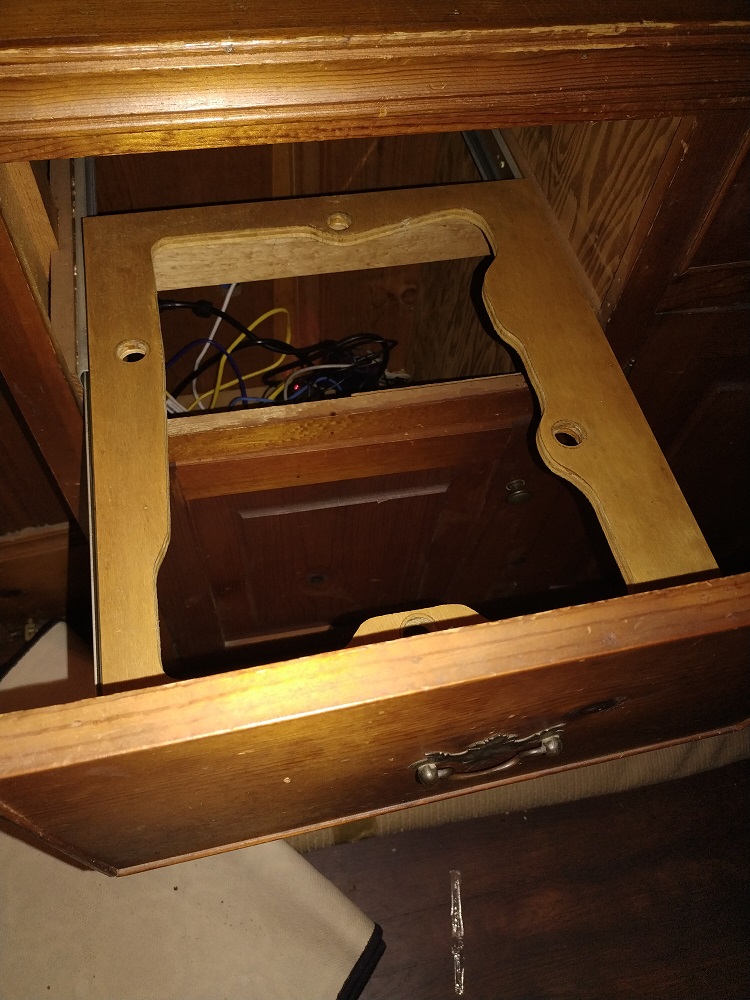 I am certain it originally held some 1950s record player (less likely, a reel-to-reel player), with the cut-out to lower the clearance height. Below are pictures of the more typical cabinet with the flip-top lid to access the equipment, but also an example of a drawer mounted unit with a similar oddball cut-out. Other styles also included a slide-out drawer behind a standard cabinet door.

OP says house is from 1953 and the cabinet is "built-in", but the roller rails seem to be of newer design. That suggest perhaps a repair or modified for some other purpose, though the cut-out remains consistent w/1950's style.

A picture of the complete cabinet and an interior examination for evidence of speaker mounts, wiring, cable holes, would confirm purpose and probably reveal a make / model tag. 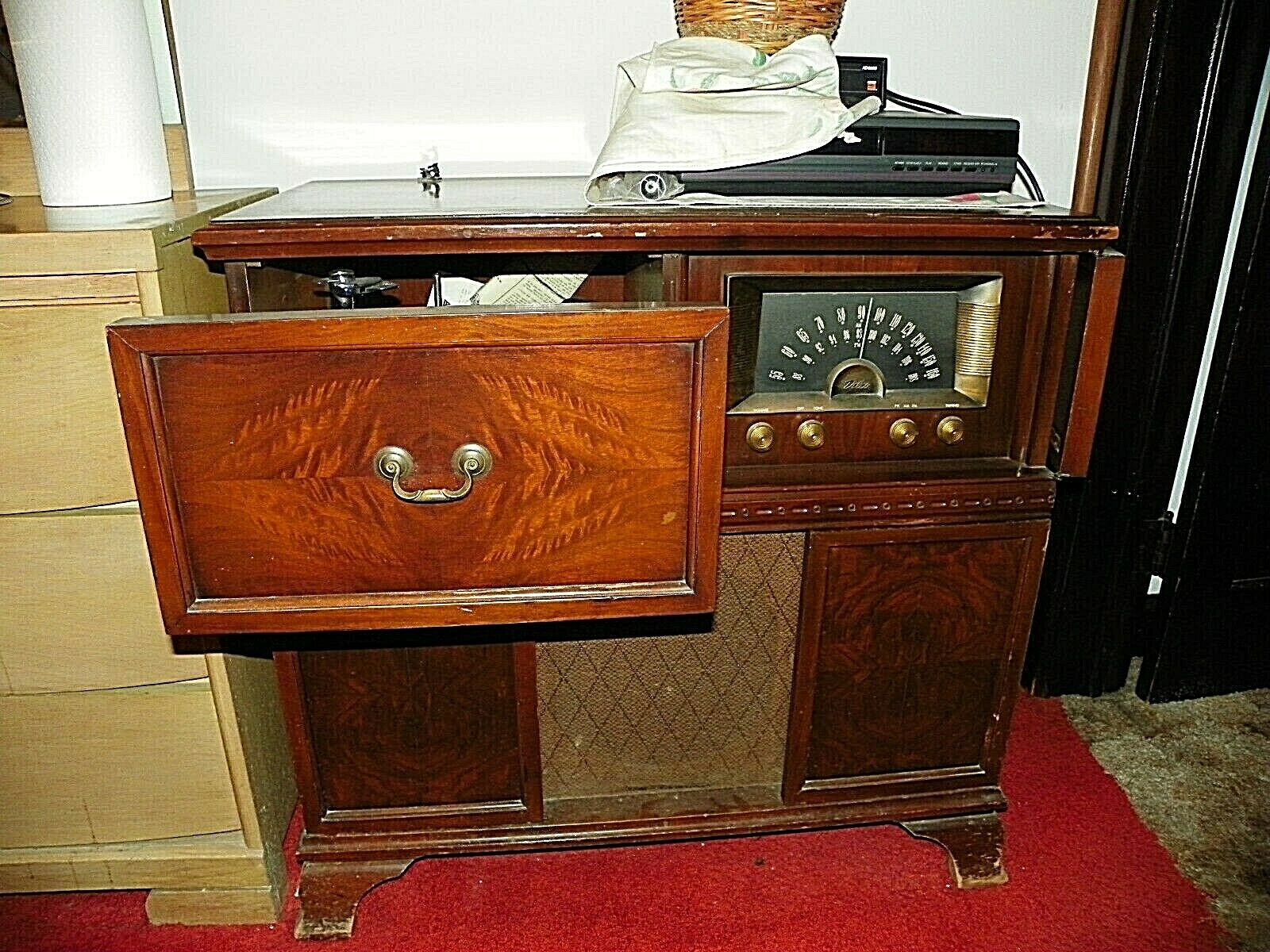 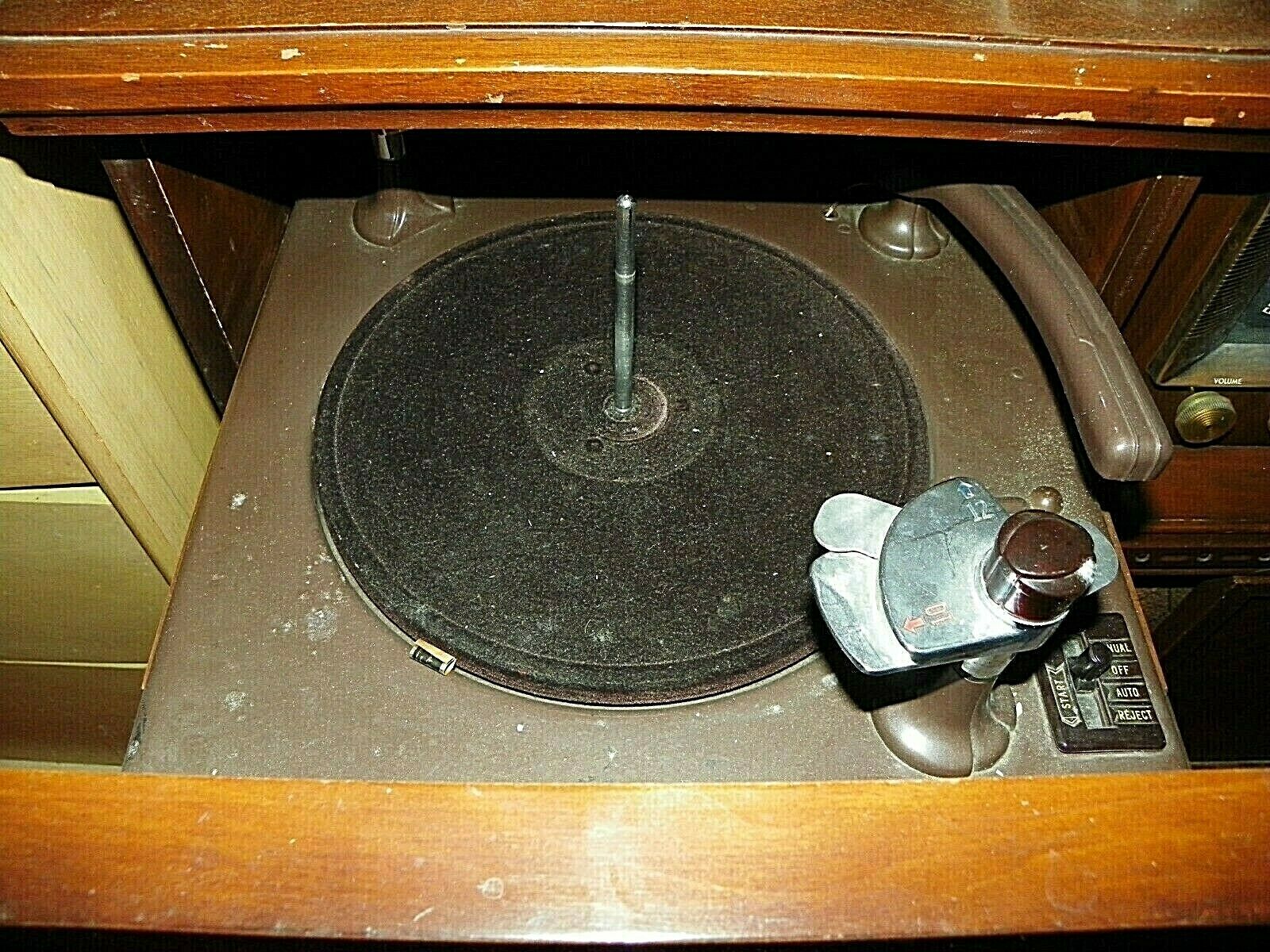 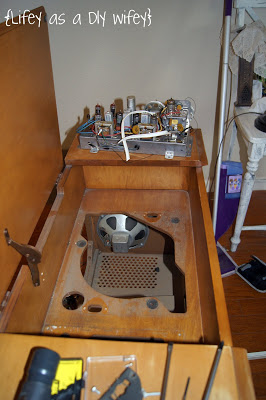 To those who suggested a modification to hold a dot matrix bottom feed printer,everyone would just route a single slot to accommodate the paper. The hard drive suggestion is just plain wrong.

My hunch is that it was a custom-made cabinet for audio equipment. The drawer might be for a record player or other equipment only needed some of the time - pull it out, load a record, play it, and close the drawer when you're done.

I'm going to move my comment to an answer...

I'd say it was for an old dot-matrix printer that used fan-fold paper. The box of paper would sit in behind the door below and was fed up through the hole in the drawer, through the printer, then it would restack... somewhere.

Usually the out-feed was to a wire tray or bin behind the printer. Is there, perchance, a slot in one of the vertical sides of the drawer where the output could have gone? Perhaps, in all their cleverness, they designed something to reroute the paper to stack above the printer so it all stayed within the single cabinet stack.

NB: since dot matrix printers were rather loud, keeping it within a cabinet would help reduce the noise. I have used line-printers (like a dot-matrix, but the print head is the full width of the paper, printing the whole line at a time instead of a character at a time) that were loud when their foam-lined cases were closed and nearly deafening when they were opened.

In my house, there is a secret drawer fitted which has another 2 dummy drawer-face thingy-s, side-by-side -- one is stationery, and can be unlocked -- other one does nothing, it makes the unlock-able one unmovable.

If you move the drawer face which does nothing to the side, you can unlock the other, then you remove the unlocked one.

Now here's the part where the hole comes to play, the secret drawer (not a drawer face) is on a holder which has one hole -- you obtain the drawer by pulling from the hole -- here the previous owner might have used 4 holes, for more accessibility.

Regarding the power outlet -- it would've be a coincidence.

Not the answer you're looking for? Browse other questions tagged cabinets or ask your own question.

2
Where to find drawer box components?
5
Will this 22" drawer slide replace the slide mounted to my 18" drawer?
1
How to drill the perfect hole in a kitchen cabinet drawer for a handle?
5
Installing base cabinets - screwing to the wall and each other?
1
How can I fix this sliding drawer?
1
Drawer too wide
7
How do I remove this cabinet drawer?
0
drawer face connector name - ikea part number 126888 - blum drawer face
0
Power options for inside cabinet drawer outlet
0
What is the name of a part that is placed between drawer tracks and the cabinet wall for a narrower drawer?