Is my Breaker Panel beyond its capacity?

Attached are 2 pictures of my breaker panel. I know instinctively that there is a lot that's not right with it, but what I'm most concerned about is the total capacity.

It looks to my untrained eye like the maximum capacity is 150 Amps, but the sum of the individual circuits seems to be 550 Amps.

Notes: The 100A circuit goes to a subpanel for an addition. The 30A dryer circuit and 50A are being abandoned because what had been a mother/daughter home is being combined into one household, so a kitchen and a laundry-room are going away. 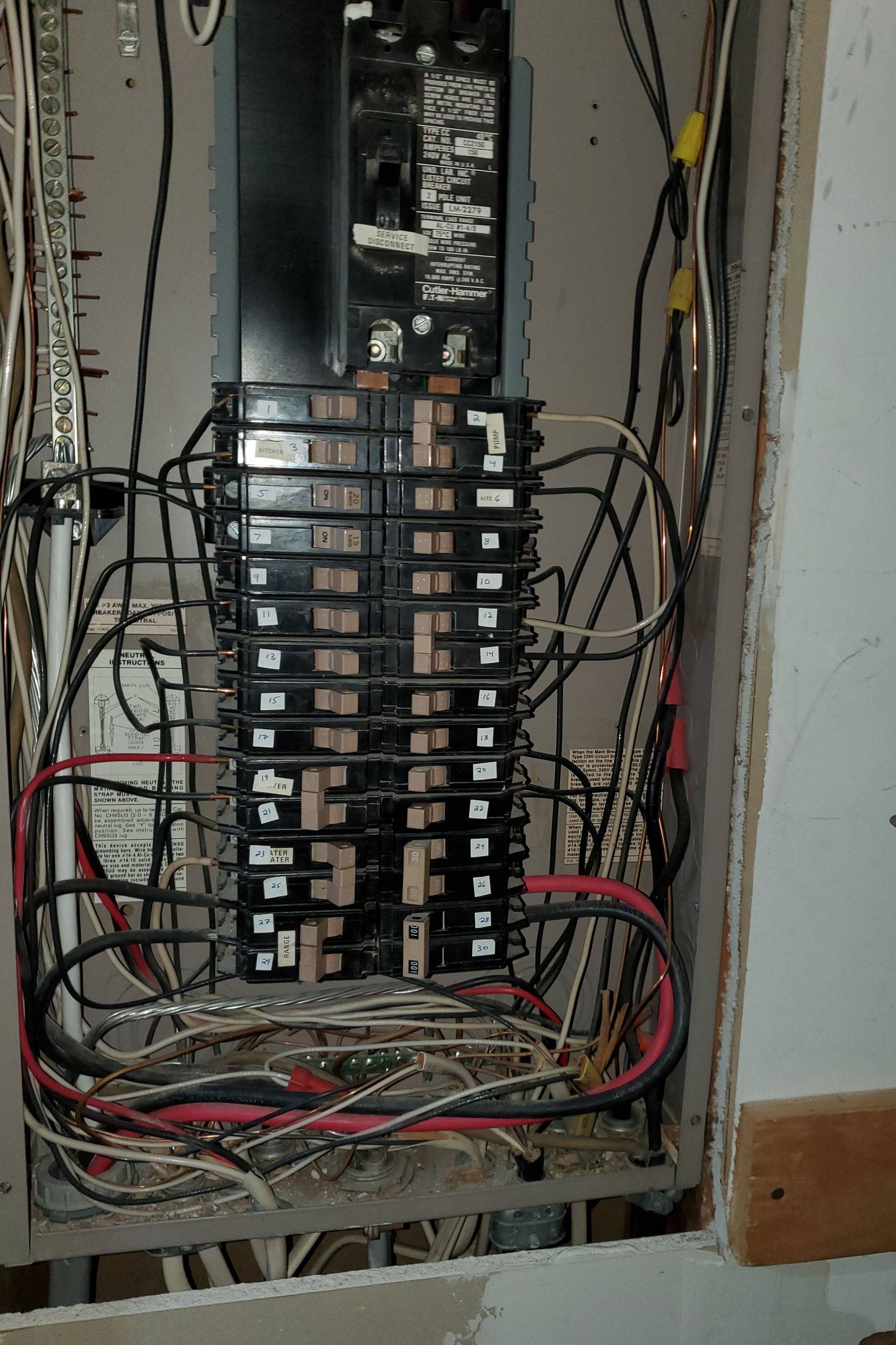 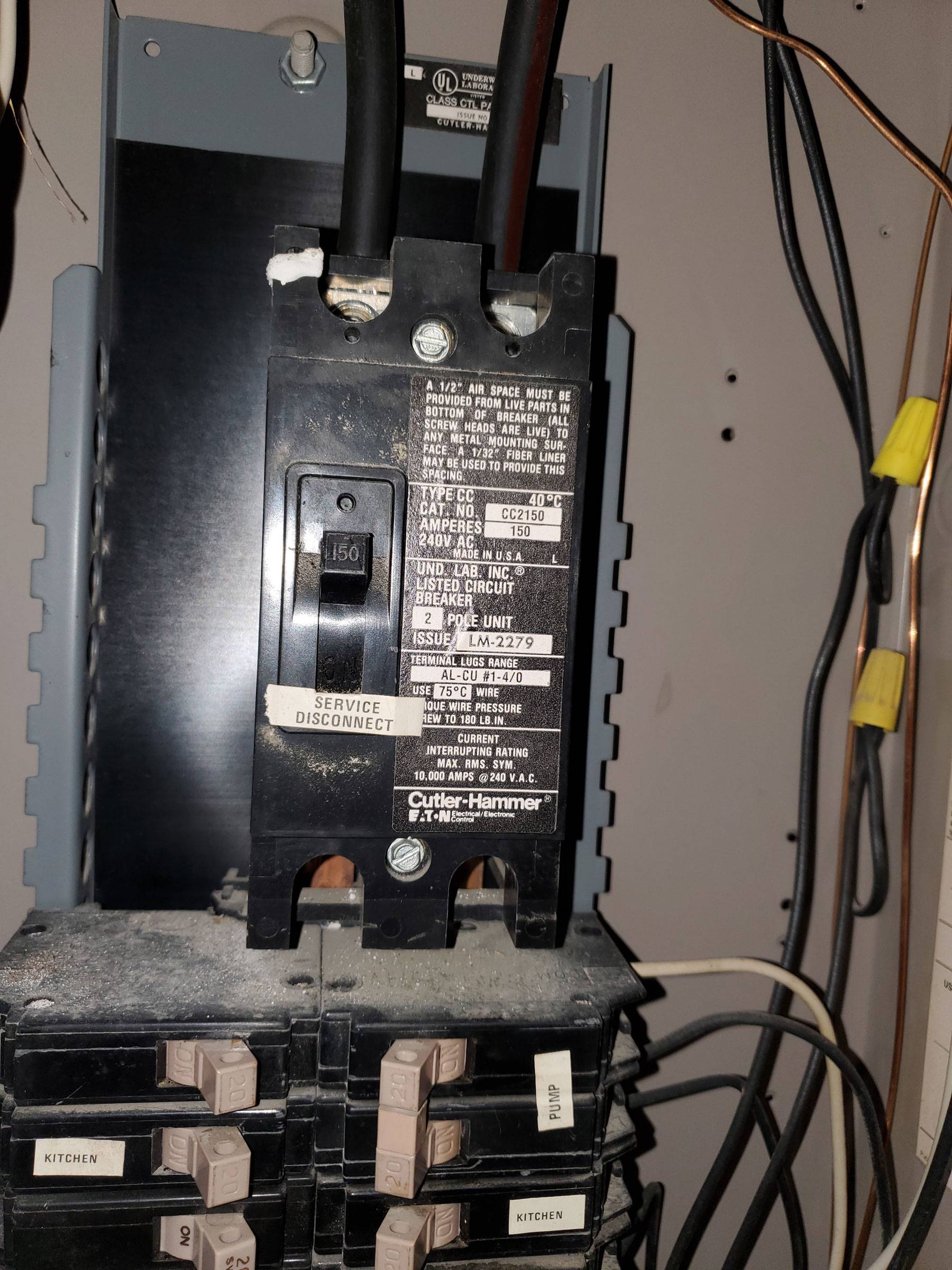 TL;DR Probably OK, but need to calculate to be sure

In general, most breakers in a panel are either only used most of the time at a small fraction of capacity (e.g., 15A and 20A circuits that most of the time have at most a few Amps in use) or not concurrently (e.g., heat vs. air conditioning) or only for short periods of time (e.g., garbage disposal).

In addition, the main breaker (150A in your panel) is for 240V and each single breaker is only 120V. For example, at the top of the panel you have 2 single 20A breakers on the left and a 20A double breaker (pump) on the right. That looks like 80A but is really 80A @ 120V and only 40A @ 240V (which is what matters). Using that example, the 20A double-breaker for the pump may well run at 16A continuous, but the 20A single breakers likely use only a few Amps most of the time with occasional short periods of more power (e.g., turn on the toaster and use 12A for 10 minutes).

The end result is that you can have 550A of individual breakers but only 150A of supply (main breaker) and be just fine.

There is a real process, load calculation, to figure out the "right" service size needed. However, a very rough calculation is to run down all the breakers and add up all the major circuits that might typically be running at one time (e.g., water heater, pump, air conditioning) and then add in a reasonable number for the other circuits (estimate total lighting load, which shouldn't be much with LEDs, typical small appliance, computer, TV, etc.).

The one problem is when an initial load calculation is done at construction (or major renovation) time and then additional big things are added. The two that often come up are:

Your untrained eye is doing OK. The 150 amp breaker is your main breaker and disconnect. The remaining breakers are listed as the maximum current they will allow to pass based on the wire size connected to them, not necessarily the equipment they're connected to. All the breaker are never used to full capacity at the same time so as long as the total usage is less than 150 amps, you'll be OK. There's a lot of diversity in the loads drawn in a house. BTW, you have a Cutler Hammer panel and breakers and they are great.

150A service into a home is ok. Considering your big appliances are ran from utility gas. Not often will you see a load close to what your main/sub breaker is rated for save for when appliances like hvac startup, and thats only for a few miliseconds. Even then breakers are spec'd to allow for the inrush current. What I notice with the panel is, firstly its a hot mess which functionally it appears ok, but cleaning up the gutters of all that cabling makes troubleshooting easier. Secondly, you have double-tapped/landed neutral conductors on the neutral bar. I would have that rectified, as double landing conductors like that can lead to problems down the road i.e. lost/loose neutral which isnt a good thing. Another thing I noticed, the age of those CH breakers in the panel. As they age tolerances can change and start giving nuisance trips etc. So be mindful of that, as you may turn a breaker off and it might not reset again.

1
Loads for sub panels from 150A split-bus main panel
0
Upgrade Electric Service from 100A to 200A
6
Loadcenter relocation -- how should I handle the resulting "trunk" of conductors, short of rewiring the house?
2
Confusion about main disconnect ampacity
7
Electrical service sizing mix up in Mexico
1
capacity of my electric panel
0
Choosing a feeder cable from solar shed to off-grid cabin
2
Can I use a 225A main panel with a 200A meter?
1
Selecting an electric vehicle charger designed for a NEMA 10-30R
2
Panel capacity for EVSE