Stacked Washer/Dryer not getting enough power

I just got a brand new stacked GE washer/dryer. I have a 30A breaker and I am running 10/2 with a 3 prong outlet. The breaker is double pole and I have the black wire in one and white in the other and power is going to the outlet but only 1 of the 2 hot wires is carrying power to the unit. So I have power to the dryer but not the washer and if I switch the 2 hot wires around vice versa. Not entirely sure what I am doing wrong as I have gotten help from my uncle who is a high voltage electrician and says it should be working fine.

You didn't specify the model number but this is likely similar (from: https://www.justanswer.com/appliance/7j73z-need-ge-stacked-washer-dryer-dryer-timer-motor-wiring-hookup.html) 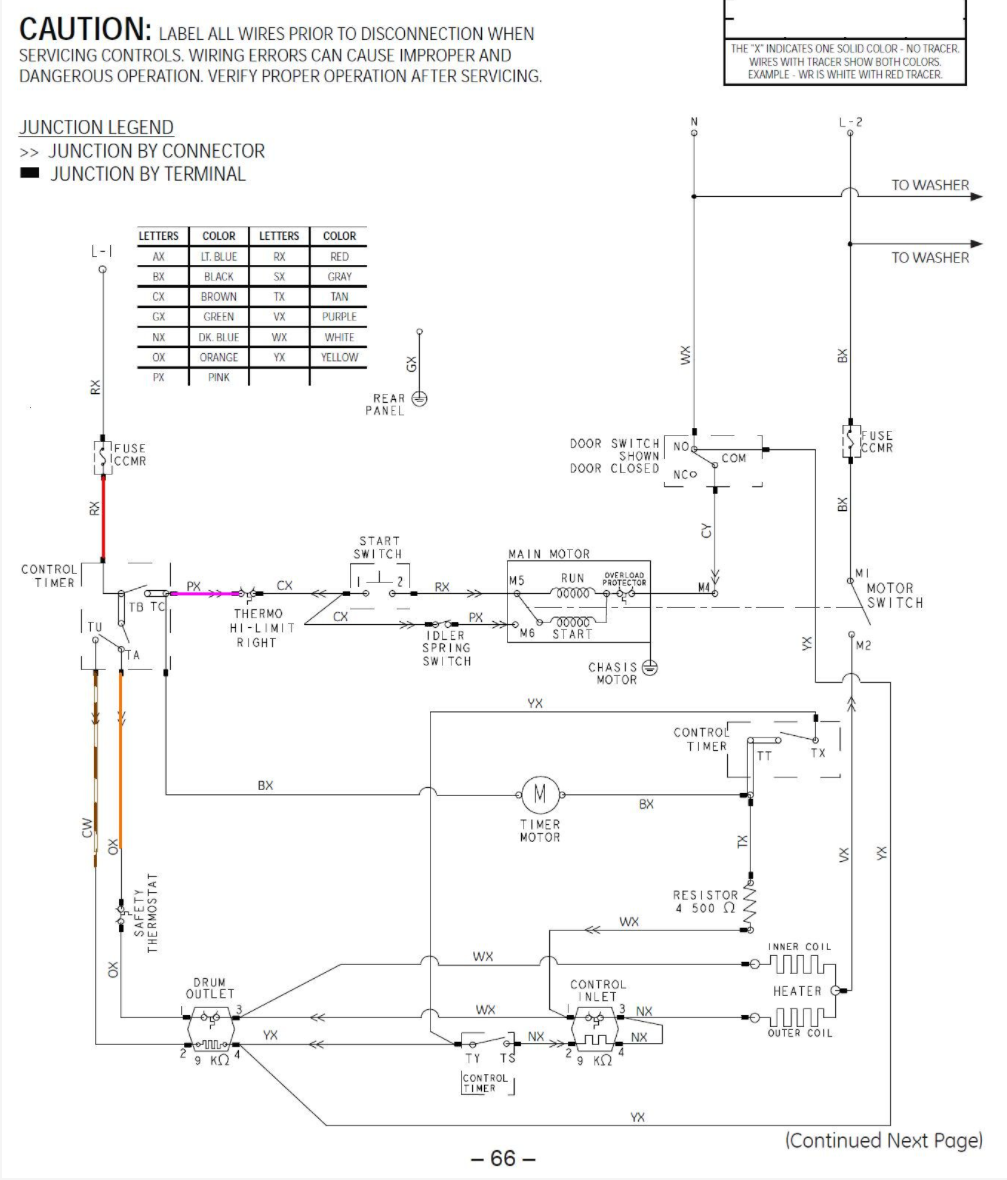 It's clear that you likely have a missing or bad N connection and using the 10/2 is probably the root cause. You should be using X/3, where X is the appropriate size wire for this application. As it is you are either powering just the dryer or just the washer but not both at the same time.

Find a real electrician (not your uncle!) and have them hook this thing up properly.

That's illegal, and always was illegal

You can't use 10/2 + ground cable for a washer-dryer. You never could.

IN 1996 (25 years ago) they banned the NEMA 10-30 connector. Your combo unit can easily be wired NEMA 14 with a 4-prong plug, and the conversion instructions are in the manual.

In 1966 (55 years ago) they effectively banned using 10/3 without ground, because they told cable manufacturers to stop making it. As a kindness to the cable industry, they made it legal to keep using "10/3 no ground" until stocks were depleted. And that would be the end of 3-wire dryer and range connections. Around 1968.

And then, Americans would land on the moon.

The whole reason is appliances need to be grounded. Wired the way you've done, it's not grounded at all. NEMA 10 doesn't have a ground wire. It has a neutral, and you are abusing the ground wire in the cable to be the neutral.

Happens all the time. The press reports it as a "mis-wired" outlet, when in fact it was a correctly wired NEMA 10 having its usual failure mode, which is why it was banned in 1996 (and expected to be practically banned in 1968).

Yes, I know it was expensive wire, and replacing it will be painful, but since it was so expensive, you really should have double checked to make sure you were getting the right thing.

Once you have all 4 wires hooked up correctly into a NEMA 14-30 receptacle and plug, I suspect the problem will take care of itself.

1
Washer & dryer lost power after the main breaker tripped
1
What could cause a 240v dryer outlet to have proper voltage but not power the dryer?
0
Clothes washer , fridge, electric dryer , electric range not working
0
Washer and Dryer on one 20amp breaker?
1
Wiring washer, dryer, tankless water heater
2
What is the correct way to share a washing machine receptacle with a printer?
0
Washer/Dryer cases electrically charged
1
Solve washer/dryer closet outlet issue. Lacks 110v outlet, need to know my options
0
How can I safely utilize a dryer outlet to power 100V and 220V loads?