Is this white paint on basement wall asbestos?

Some fibrous paint is starting to flake off my basement wall. Is this asbestos? Or, is it some other material that’s waterproofing? Do I need special considerations when removing or repairing this stuff? A contractor suggested stripping and using some hydro cement. 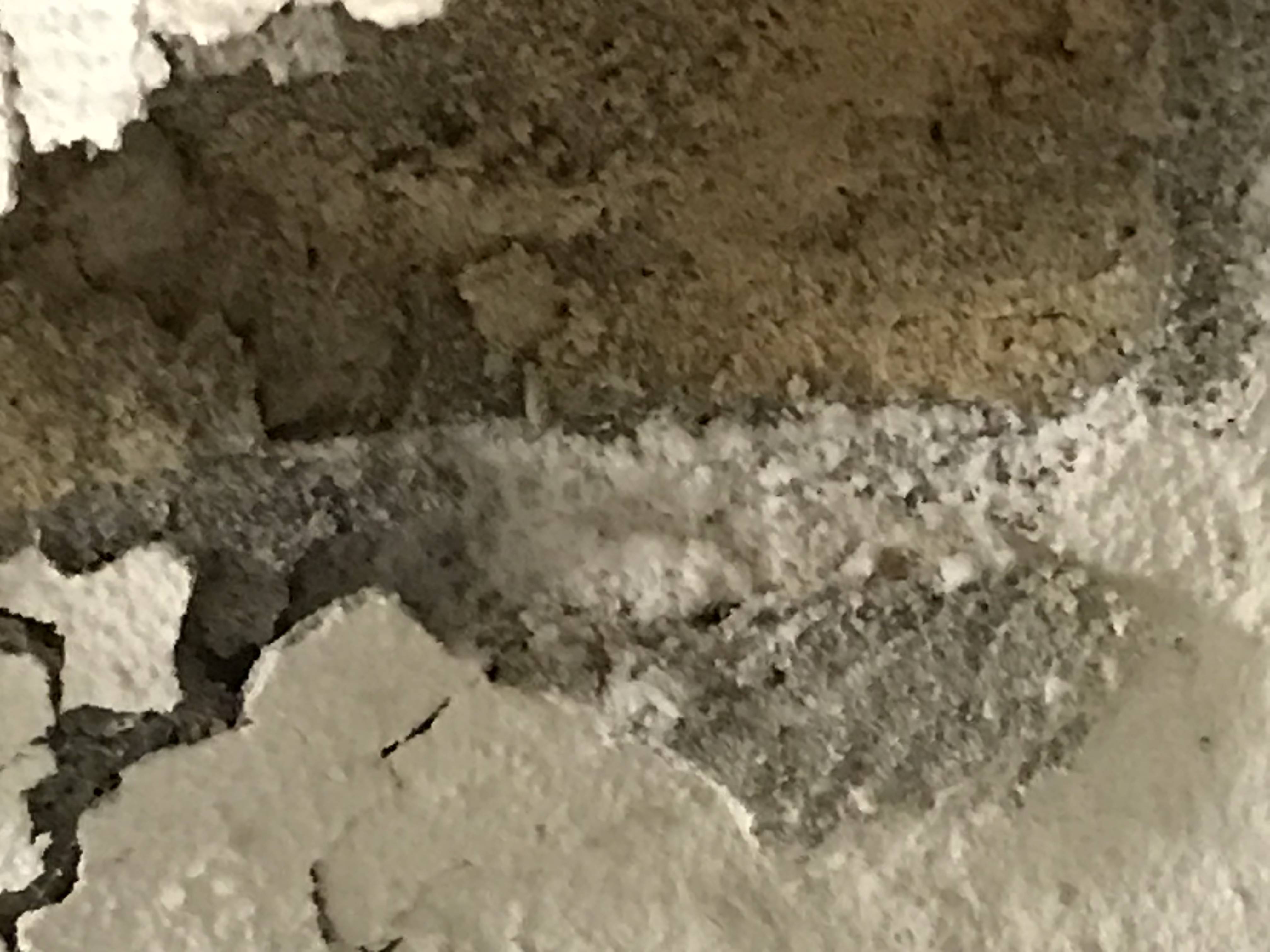 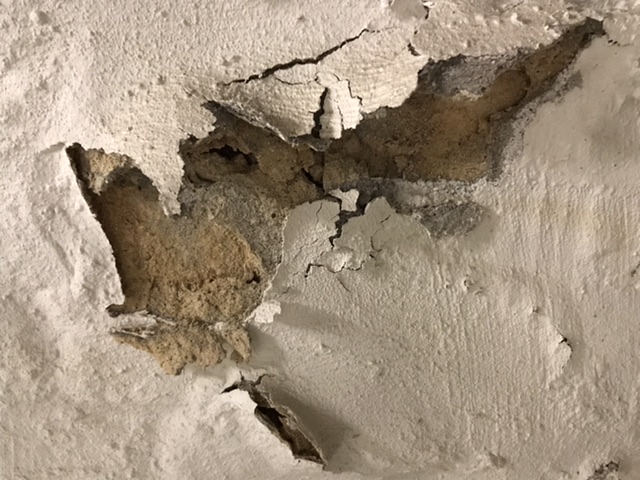 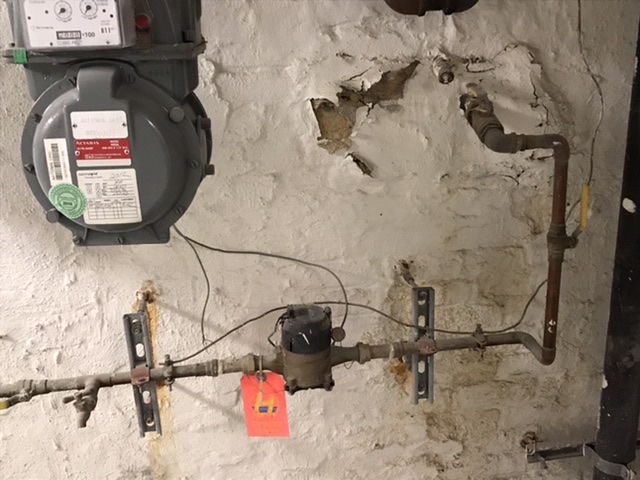 I would guess that its waterproofing paint (e.g. "DryLok", etc.) and contains no asbestos or lead. What protection could a thin layer of "asbestos paint" offer to a concrete wall?

Those aren't fibers you're seeing in the paint, they're brush strokes. The crusty, fuzzy material you're seeing behind the paint is mineral accretions.

The paint comes in 4-5 gallon buckets and has a very thick, almost paste-like consistency. You paint it on with essentially a paste brush and it dries with big fat brush strokes. If it was applied over existing efflorescence, etc. it picks up some of the particles and they dry in the paint giving it a sandy, rough surface in some spots.

When moisture builds up behind the paint (and it likely did because it was applied to the inside of the wall that was leaking from the outside) the concrete/cinder blocks seep moisture and the paint is bubbled up from the surface, blisters, and cracks spilling mineral accretions out of the ruptured paint layer.

You can see the accretions in the photos you attached. What's going on is the water is seeping in through the blocks and dissolving minerals, salts, etc. along the way. Then the water deposits them on the surface of the block as it evaporates. Eventually that efflorescence builds up thick enough to push the paint up off of the surface.

Here's a picture from somebody else's house that looks very much like the pictures you posted. 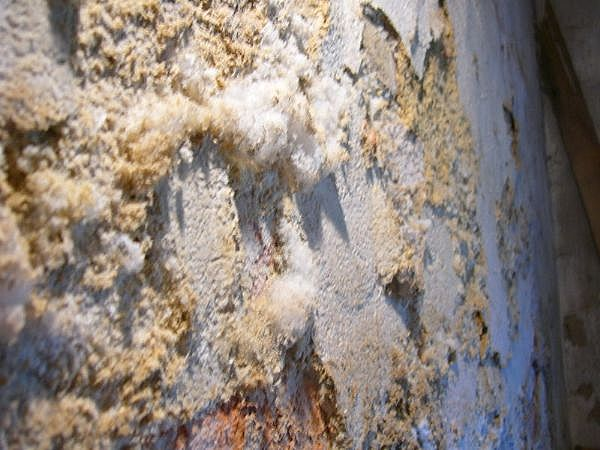 I had a basement shop wall that would do that every few years in a fairly small area (until the problem was fixed correctly) and it was enough to scrape off the paint and efflorescence with a stiff wire brush and re-apply the DryLok to "fix" it again for a couple years.

The problem is, as the water leeches out minerals and so forth from the concrete, it can effectively weaken the concrete and eventually do terrible things to your house. One day, you'll need to fix this for real. In the meantime you can probably spruce it up a little while you're getting around to fixing it.

Wear a mask, gloves, etc. to protect yourself, of course. I don't see any in the pictures you posted, but there could be mold growing in there if it's moist enough. It would likely show up as black fuzzies in the mineral deposits.

The "real fix" here is to prevent the water from entering the blocks from the outside rather than try to seal it in the blocks from the inside. Depending on the nature of the leak and the severity, you might be able to solve the problem by reconfiguring your downspouts or the grade of your yard to help move water away from outside of the basement walls. Or you may need to excavate the wall and waterproof it from the outside if rainwater management doesn't do the trick.

Hydraulic cement isn't really what you want here. Again, it's only an attempt to seal the moisture inside the blocks. Hydraulic cement is better for patching holes and cracks, not really for large areas like that. It may help provide a smooth-looking surface, but that moisture is just going to find a way past it eventually.

3
What Material for Basement Walls?
1
Best way to cover basement tiles containing asbestos
2
What to use to encapsulate asbestos tile in basement?
1
How to encapsulate asbestos around water heater exhaust pipe and cinderblock wall?
23
Is my plan to safely remove asbestos siding sound?
1
Do n95 masks provide ANY protection against asbestos?
0
Fiberous Material White Material below Plaster - Asbestos?
0
How do you stop basement waterproofing sealant that is coming into the sump pump basin from the foundation drain pipe?
26
Seemingly overbuilt basement wall - load bearing?
0
How to safely handle a (likely) asbestos popcorn ceiling encapsulation?