Is it safe to use the ground as a neutral when other grounds are available?

I moved into a new house and was working on making a three way switch work properly when I came across some creative wiring. The traveling wire between the switches was only two wires, and the ground from it had been electric taped over and used as a neutral wire for the lightbulb.

Obviously normally this would be very dangerous because you wouldn't have ground wire in case of short circuit, however, there is an outlet by one switch and another switch by the other. The grounds from the wires for those has been used as the ground for the switch. That outlet and light are on the same breaker. Here's a rough diagram of how things are wired: 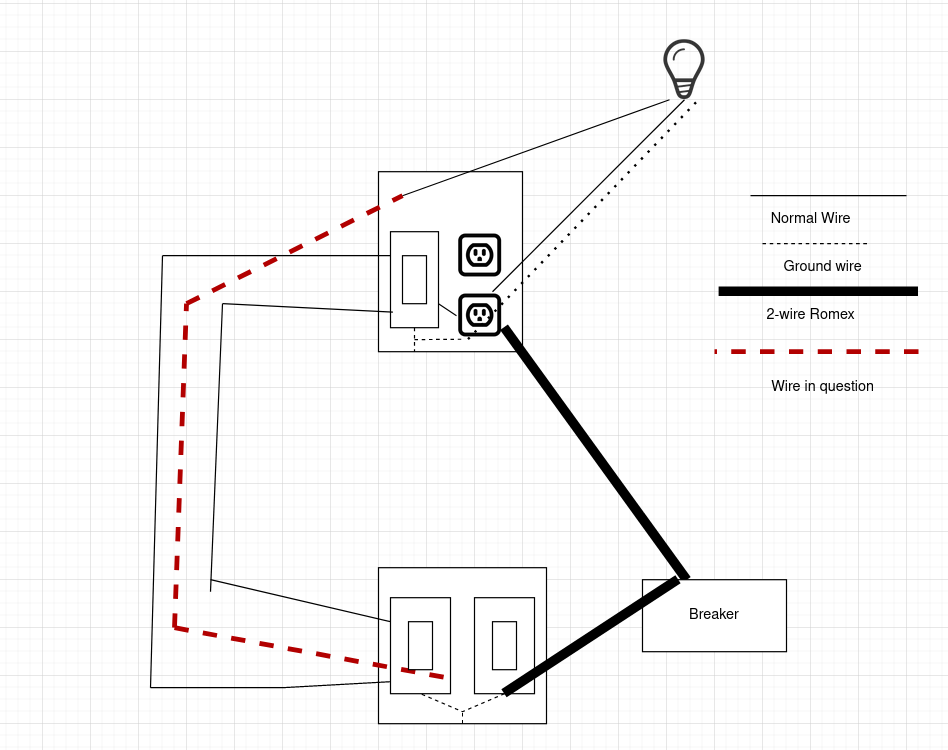 What are the risks as a setup like this? As far as I can tell, everything is grounded and should be okay but I'm no electrician.

Edit: I was using the word "drain" instead of "neutral" and fixed it.

What could possibly go wrong?

In my attic, I found a junction box where the owner had made sure their setup was 'safe': they connected an insulated 2.5mm² wire to another insulated 2.5mm² wire. Only, one was brown and one was green/yellow. Perhaps they decided to 'safely' ground an unused live wire? Or used a bit of leftover brown wire to ground the ceiling lamp? If I hadn't found this box and instead repurposed the other end of either cable, I may have killed somebody (or myself) or burnt the house down. I'm sure the previous owner did not realize that.

You have ground being used as neutral. That is a serious code violation and can cause a number of dangerous problems.

In the old days, the only real solution would be to run a new cable. Fortunately, today we have smart switches to the rescue! Look for a smart switch that has 3-way operation but that only needs one traveler between the switches. That can be by using some sort of signaling over the power line or by one the switches being a wireless remote.

Make sure to get something that is properly UL or ETL listed - generally that means either knowing exactly what you want (specific manufacturer/model) or by shopping at a traditional bricks and mortar store such as Home Depot or Lowes (shopping online is OK, as long as the items are sold in the US stores they will be properly certified) and not an exclusively online retailer where the items may be provided by a 3rd-party and of dubious quality and safety.

I'm assuming by drain, you mean neutral. Ground wires can not be used as any other conductor, repurposed. If its green insulated or bare copper, then it must be used as a ground and only as a ground.

Not the answer you're looking for? Browse other questions tagged electrical grounding multiway-switch or ask your own question.

11
How can I add a circuit breaker when there are no openings available in the neutral bus bar?
1
What are the risks of sending low-current neutral through the ground wire?
2
Grounding an old 2-Wire system in my bathroom
0
Can I strip a neutral wire and use it to pigtail ground wires?
2
Can I use the ground wire as a neutral for an outlet?
3
Understanding ground to earth and neutral, trying to make my home safe
2
Are this subpanel's neutral and ground connected?
6
What happens if ground and neutral are swapped in a light switch?