Can you make a plywood jigsaw puzzle, using a jigsaw power tool?

I just bought a cheap jigsaw power tool. I'd like to have a go at making a jigsaw puzzle with it, but all of the videos etc I've seen involve using a scroll saw instead.

I know that I could just get some cheap plywood and do some experiments, but I wondered if anyone else had tried this or had any advice?

One thing is that the pieces would be really big - it would probably be like a 1 foot by two foot rectangle cut into 12 pieces - so the contours shouldn't have to be very "tight".

One thing I was considering was to use clamps to hold the jigsaw tool in place on my workmate, with the blade going through the gap between the top parts, so I could then hold the thing i'm cutting and push it through the blade, rather than trying to manoeuvre the jigsaw tool around the contours that I want to cut. Is this an insanely dangerous idea (or if you prefer, a really good way to cut my fingers off?). I've got some welders gloves I could wear for a bit of protection.

Sure, why the heck not?

As you've noted, if you're going to DIY a jigsaw puzzle, you'd usually cut it with a scroll saw. That's because the blade of a scroll saw is much more fine than that of a jigsaw. It will give you much smoother cuts in addition to being able to make tighter curves. The tight curves may not be that important to you, but you may not be happy with the rough cuts you get from the jigsaw.

You'd probably have to sand not only the top/bottom of the plywood to round over the corners to avoid the possibility of splinters/cuts, but you'd probably also want to sand the cut surfaces themselves to make a nicer finish. When you've finished with the sanding, you probably won't have tight fitting pieces anymore. Actually, since the jigsaw blade is very thick (in comparison to a scroll saw blade), you won't even start with tight fitting pieces.

IF, however, your goal is primarily to gain experience with the tool and you don't care that much about the final result (i.e. you'll be happy even if it's a fairly sloppy fitting puzzle), then by all means go ahead and do it! You're gaining experience and learning, and there's nothing wrong with that!

use clamps to hold the jigsaw tool in place on my workmate, with the blade going through the gap between the top parts

Generally a bad idea, though I've seen it proposed on many YT videos. You'll have to reach under the bench to turn the jigsaw on and lock the motor on. Does yours even have a trigger lock? Once it's locked on, you have to reach back under the bench, reaching more or less blindly, for the trigger to unlock it. It's possible to get your hand into the area where the blade is moving and cut yourself.

If you have to turn the saw off in a hurry because the blade is jamming, or the wood is moving out of control, then you don't have a quick, safe way to reach the power to prevent blood loss. Never a good plan.

I've got some welders gloves I could wear for a bit of protection.

Welding gloves won't offer much in the way of protection against a jigsaw blade. It'll cut through even thick leather pretty darn quickly. It will give you an extra fraction of a second before the blade reaches flesh, but not much.

In general, it is recommended to not wear gloves when using power tools (with the possible exception of cut-proof, chain mail gloves like meat cutters wear). The material in the gloves doesn't offer much protection against the sharp bits (noted above), and they have the added bonus of tending to get caught up by the sharp bit and pull your hand in toward the sharp parts. Avoid gloves when working with power tools.

You can do this, but there are a few things to be aware of. First, you need to use a blade made for scrolling, tight cuts. This blade is about half the thickness (from the teeth to the back of the blades) so it can make tighter curves. The tooth pattern is also designed for clean cuts. 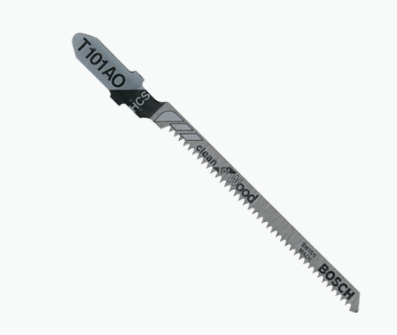 Second, you have to make sure the jigsaw is very secure. They sell attachments to do exactly what you want, and they are designed to hold the jigsaw tightly. You can make your own, but spend some time on it to make it precise and strong. Realize that a scroll saw supports both ends of the blade. If you push too hard on this jigsaw attachment, or use too hard of a wood, the blade could catch and break. Wear safety glasses, of course. 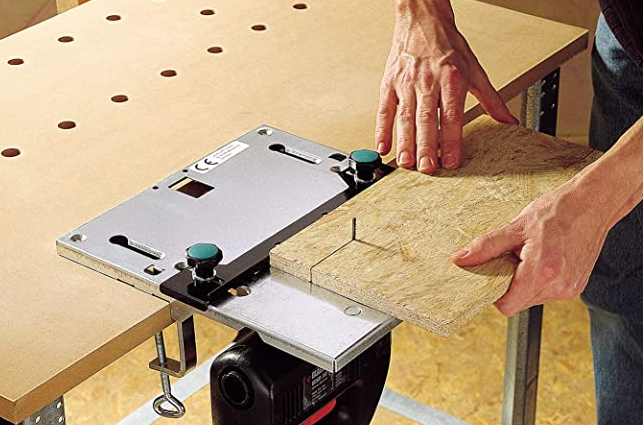 (Not a product recommendation, just using to illustrate the idea)

Third is safety, and you have to realize that a super sharp blade poking up through a table with no guard is pretty dangerous. A scroll saw has an arm on the top so there it's at least a little harder to catch your hand on. You want to be careful with this and not wear gloves. When working with saws, its better to get a clean cut than to have a glove catch on a blade and pull your hand in (in the case of rotating tools) or to just get stuck.

As said, the two problems are the Kerf width (the wood wasted to the blade width) and doing tight turns nicely.

Change your plan. Instead of "cut one sheet into a jigsaw puzzle" consider that you're making and fitting a number of parts together.

Print two copies of your cut-pattern, and glue them to alternate pieces of wood. Colour them alternately like a chess board, but opposite on the second piece.

Then use your saw to cut every other piece out by staying strictly outside the line. Yes, that means every second puzzle piece will be scrap, but you'll end up with a grid of pieces to hand-file to a perfect match. You will want to drill entry holes for the jigsaw blade, rather than driving through the corners.

To get those tight inside corners, just nibble away at them. The interlocking piece will come from the other set of blocks.

If hand-filing gets too much, you might find a die-filer a useful tool. I've made one out of an old sewing machine, so it is already variable-speed from a foot pedal, leaving both hands free to move the work piece around.

If the material wastage feels excessive then another option is to cut all the internal pieces identically so they tessellate, and they could all go anywhere. Once the puzzle is assembled, you could cut the sides straight or make custom pieces for the sides and corners.

There's a couple of things to keep in mind

Beyond that, you can do this using a narrow small-toothed blade. If precision is something you seek (and for a jigsaw puzzle that will be important), and you have the time, buy yourself a coping saw and do it by hand.

Not the answer you're looking for? Browse other questions tagged woodworking saw or ask your own question.

16
How can I protect my fingers while using a band saw?

33
Is it worth spending extra to get a nicer circular saw?
17
Can you rout plywood?
4
Does it make sense to try mounting the jigsaw onto the table?
4
Are there any good videos available that teach basic carpentry?
3
Biscuit, dowel or simple braces for making unit top with inset lid and slim sides?
2
Jigsaw cuts crooked when trying to rip enginered wood
0
Sealing OSB subfloor from moisture? Patching small gouges?
2
How to make a straight groove easily?
1
Dismantling an old piano