I think I have this figured out for the most part but looking for validation from expert strangers on the internet.

Renovated the kitchen in this 1960's house. I think it probably has been renovated before and there was a ton of power in the kitchen. 240V for the range, 240V for an electric griddle, and 6 more 120V circuits. In our renovation we went with a gas range, so only needed 120V for that and then got rid of the 240V griddle circuit.

The garage is on the other side of the wall (conveniently) so now I want to use those circuits for the garage. I'm leaving the range circuit as is but just flipping it around in the wall. Will be using this for maybe a welder later down the line or maybe way down the line an electric vehicle charger. Don't know yet.

But currently the garage only has one 120V outlet and I'd like some more for all my power tools. (it's a typical shop/garage).

I'd like to take the 240V circuit that was feeding the griddle and split it into two 120V 20A circuits.

Here's my plan I'd like multiple second opinions on:

Existing circuit starts at the panel with two 30A breakers with handle ties. It's 10/3 wire with ground (black, red, white, ground). Black from one breaker, red from the other, neutral to the neutral bar, ground to the ground bar. As expected.

So I'm going to replace those 30A breakers with 20A breakers (with handle ties) and then in my circuits in the garage I'll be sharing the neutral (with pig-tails, not the device pass through). I think I also might just make this stupid easy and do a 2-gang box in the garage so there's just one destination for the existing wire. Neutrals go together, one outlet gets black hot, one gets red.

Here's a photo of the current circuit from the panel perspective. The circuit in question is the two 30A breakers on the right side coming from the white wrapped wire in the middle KO (the breakers that are currently off). 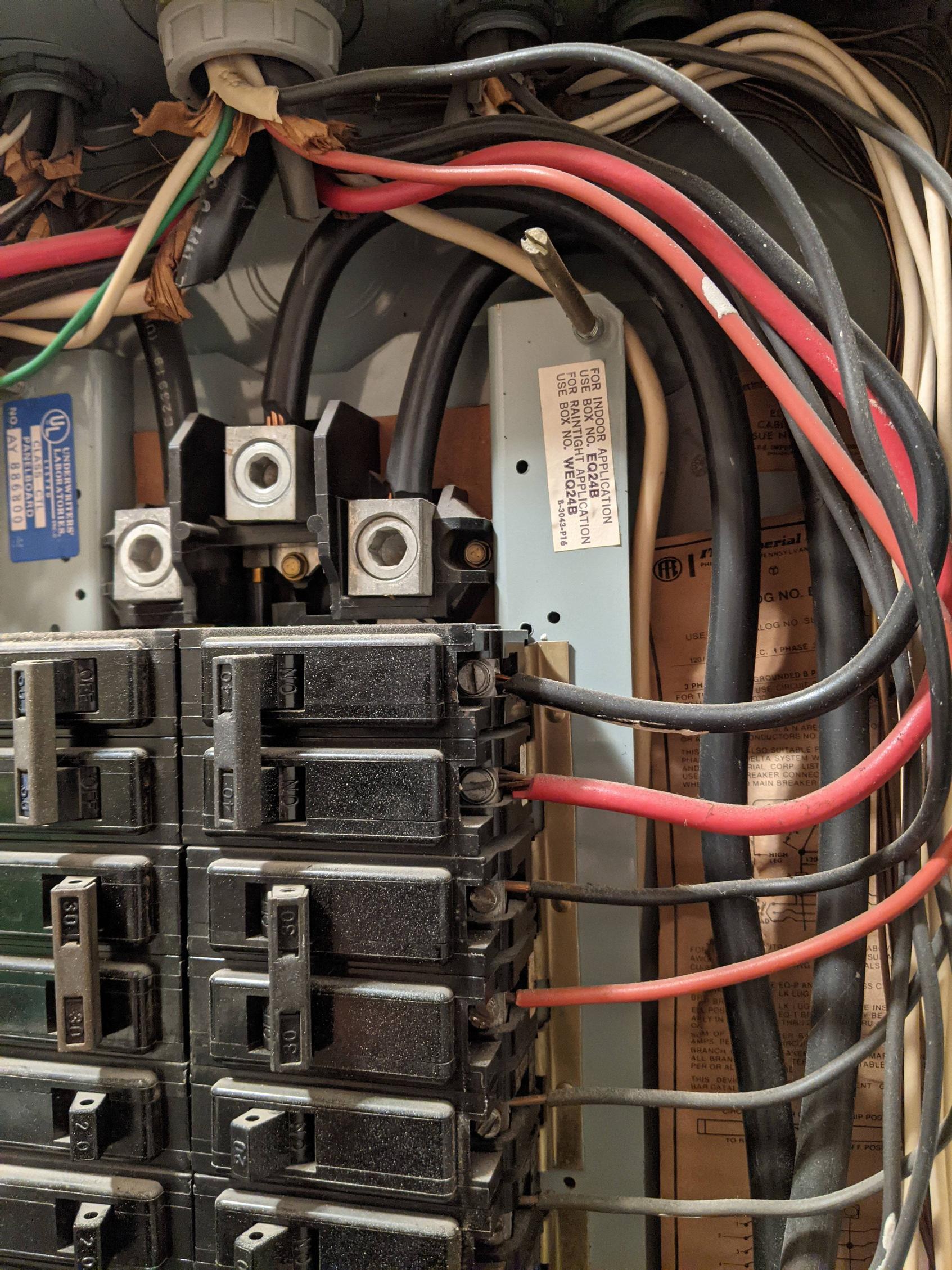 Edit: Mistakenly labeled the original wiring as 12/3 with ground. It's actually 10/3. So additional question is can I leave the breakers as is? Maybe install 30A receptacles, or even just 20A receptacles and have the extra overhead...?

10 AWG wires (based on clarification in comments to the question) can handle up to 30A. The "usual" receptacles for most things in the US are 15A or 20A. There are exceptions (welders, EV chargers, etc.) but for most people it is 15A or 20A, generally 120V and occasionally 240V.

Installing 30A receptacles actually won't help because they will not be compatible with the things you want to plug in. That leaves two choices:

Either way, you need a double breaker (as you have) and not two separate breakers. That's because the cable has one neutral that is shared with the two hots. The only way around that is if you use one hot (black or red) + neutral (white) from the existing cable to connect to a single breaker and a single set of 20A receptacles on the other end, and then run a new 2-wire+ground cable to a second single breaker.

Since you still have a 240V circuit for the range, removing the 240V griddle circuit should not be a problem in terms of total circuits for the kitchen. Oops! As noted by J..., you are planning to move and/or repurpose both of your kitchen 240V circuits. You generally can't do that, as a kitchen should have at least one available. Personal example: I replaced by electric cooktop with a gas cooktop (i.e., went from 240V big circuit to standard 120V 20A circuit) but I still have a 240V big circuit for an electric oven (and upgraded that when I replaced single oven with double oven). It is quite common to use 240V for an oven even if you have gas for some cooking appliances, and I believe code requires you to have one such circuit available.

The 8 other circuits sounds high, but if you have 2 countertop (minimum, more is fine), 1 dishwasher (or 2), 1 disposal (or 2), lights, refrigerator, etc. it is easy to get to 8. Definitely don't move any of the 120V circuits to elsewhere without being sure there is no code restriction involved.

Any new circuits (and this is a new circuit because it is a new location) in a garage will need GFCI for the receptacles. That could be done using a GFCI breaker or using GFCI receptacles.

I know 8 circuits seems like an embarrassment of riches for a kitchen, but Code says you actually do need most of those.

The first question on converting either the range or griddle circuit is whether they have both a neutral and a ground wire. If they do not have both, they cannot be converted into what you want.

However if you do have ground and neutral, you can bring the wires out to a subpanel. Then you can run any number of 15-20A circuits off of the sub panel, and also support 240V tools as well.

To add a bit of info, there’s absolutely no harm in using that #10 wire directly to a 20A receptacle. Or even a 15A for that matter. As long as you downsize the breakers. The wire will just be oversized which is perfectly fine. The breaker’s primary function is to protect the wire. So, a 20A breaker with #10 is overly protected. Your proposed plan will be fine and NEC compliant.