I have 2" low volt conduit that runs 50' underground from a communication mast on an out building to a basement. The conduit is crushed at the sweep 90 where it enters the basement. I currently have fiber internet running through the conduit - the fiber installers were able to get a run through. I wanted to switch and now I am trying to have coax pushed through but the installers couldn't get it through. I pushed a 50' endoscope and saw the crush damage - probably would have been visible from the basement without the scope. The fiber passes through the narrow crush.

There is no pull cord.

I installed the conduit before backfill. I probably should have sleeved it or used something with thicker walls maybe schedule 40 pvc but this 2" db2 (direct burial?) low volt electrical conduit is what my electrician told me to run. What do people normally run? Trying to carefully backfill is a bit of a joke so just wondering what the better practice is. Possibly I should have done 90s and kept the conduit closer to the surface rather than the gradual slope up to the surface.

I was thinking I could try to hookup my central vac to the conduit and suck a mason string through the conduit into the basement to use as a pull cord. I think this is still my best option. Since the crush damage is close to the basement I am wondering if I could somehow uncrush it?

I could dig an 10' pit but my side set backs are 4' and the grade is probably another 2' higher 4' away and I'd need to setup shoring. Also I have a 1" pvc irrigation pipe running 8" under the surface grade with irrigation wire and 12/2 landscape wire so I'd have to work around that. Even if I do dig it, would I be stuck cutting and replacing a segment or would there be some way to uncrush it?

Aren't there some plumbing bladder type things that you inflate? Maybe I could get something like that through the crush gap and inflate it?

When the installers were out I mentioned possibly using the fiber as a pull but they didn't want to risk damaging it or damaging and not being able to get their pull through either and being stuck without internet. They mentioned bring out a rodder instead of fish tape - I am not sure what this would look like or if it could help get through the crush restriction. I am going to run the endoscope from the other end and see if there are any other areas that were crushed. It did seem like the installers were able to get by the crush damage they just weren't able to get the two fish tapes to hook up. 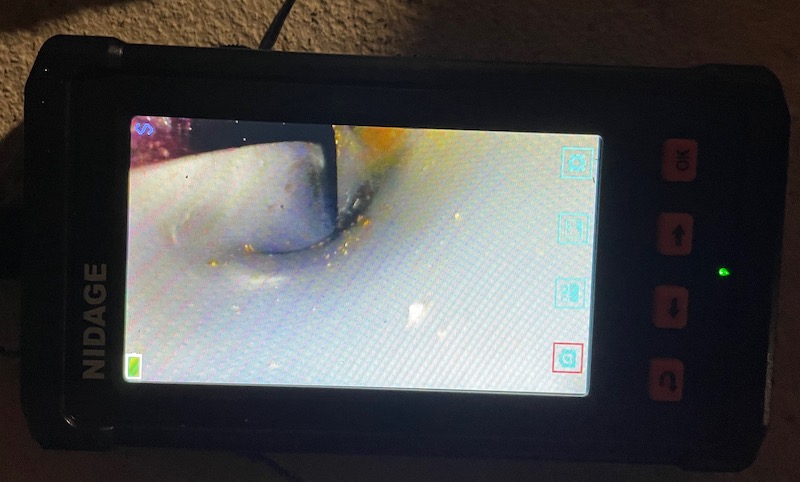 I would try a nylon pull through or the string and vac as you suggest.

Trying to expand the crush may damage one of the existing cables.

I bought a long nylon pull through many years ago - some 20m and while annoying for short runs it works well for sequential and long runs.

Not the answer you're looking for? Browse other questions tagged conduit or ask your own question.

1
How can I remove a stuck coax cable from a conduit?
0
PVC electrical conduit connection to service panel
2
Running conduit between basement and 1st floor
5
OK to reposition a 90 degree sweep of Schedule 40 conduit after it's been glued?
1
Narrow conduit with 90 degree elbow - three thhn wires
2
Inground Conduit Box for Driveway Snow Melting
0
Bringing aerial cable into an existing PVC Conduit Body
2
Is it OK to use gray PVC electrical conduit for low voltage wiring?
1
Can I repurpose an unused 6" radon pipe as an electrical conduit?
2
Running electric to sub panel in detached garage, can I use a flexible conduit in my basement?