I have an area that is designated to be an outdoor kitchen along our cinder block fence. The length is 15.5 feet and the height will be a little shorter than 8ft. The wall itself is nearly 6ft. So I'm adding less than 2ft to where I'm placing this wall. It will have hardy backer board on our side that will be tiled and then a countertop with sink and outdoor stovetop.

My question is, what are the best fasteners to use to attach the pressure treated lumber to the cinderblock wall? Would I be using a cleat for a 2x4 stud to attach perpendicularly to run of the cinder block wall?

I know there will be some of you who will say this isn't legal or up to code. So I'm just putting this out here now that I am doing this, regardless. Please just tell me what will be the most secure way to fasten 2x4 exterior grade pressure treated lumber to a cinder block wall.

I'm adding some photos to help get my point across. 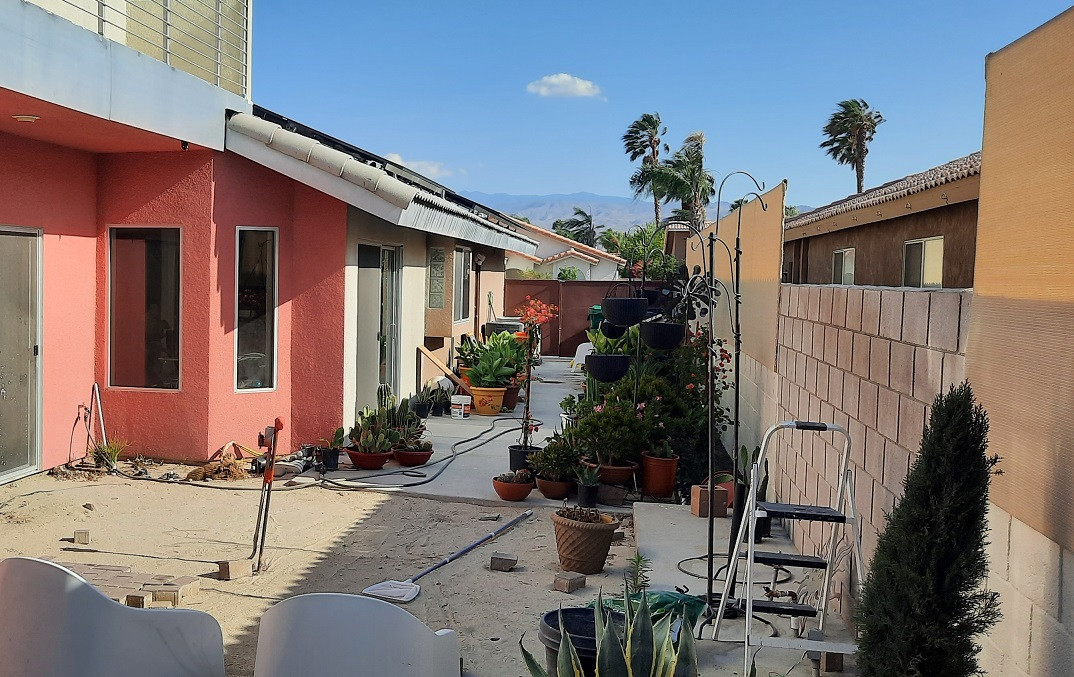 Notice the exposed cinderblock wall. That's the area I want to build my kitchen wall. The privacy panel on either side that's in a tannish brown is 8ft tall. I created that from fabric shade and am very happy with the results. I want to basically frame a wall that is made of pressure treated lumber and then attach it to the cinderblock. I want the height of my wall to be the same as the privacy panels I made for a seamless look (in terms of height). There will be cabinets at the base with a countertop, sink and stove top that will sit on the concrete platform at the foot of the wall. The height of the wall is just to match the privacy panels I made. I will install hardiebacker board on my side and then I will tile the wall from the height of the countertop up to the top of the wall. On the back side I will attach some plywood and/or some type of siding and paint it so that it looks reasonably nice for my neighbors. Does this help explain what I'm trying to do?

Notwithstanding questions about the construction of the cinderblock wall and its suitability to support an attached wall or the wisdom of a cementboard/tiled wall extending beyond the cinder block wall, moisture/weathering concerns, aesthetics, etc. there are several methods for attaching boards to cinder blocks that could be useful for you. (I'll leave the other topics for someone else to discuss.)

For doing this you'll need a hammer drill and properly sized masonry bits. You could use "regular" drill and bits, but that's likely to burn up your bits and maybe your drill.

This is probably the the most straightforward approach and the one I prefer.

Essentially, you're going to drive a screw through your 2x4 anchor board into the block. The holding power depends on the quality/integrity of the block itself, the quality of the screws, and having the right size hole pre-drilled.

One popular brand of screws is Tapcon but there are others on the market. What you need to do is drill a precisely sized hole The package should tell you what size bit to use (and some packages include the proper bit along with a handful of screws.) 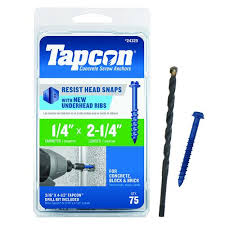 What you do is position the 2x4 where you want it and drill through the board, into the block, to the necessary depth. Remove the dust from the hole and drive the screw home to fasten the board to the block wall.

I recommend using screws with hex heads or at least star drive heads. The Phillips/slotted style screw heads will slip off and break bits, etc. Different diameter/length screws will hold with different degrees of force. I don't know the details of your project, so you'll have to figure out how many screws to use and so forth. Err on the side of too many.

If you're working with the hollow parts of a cinder block or the solid parts the screws will work, but sometimes they can cause old or low quality blocks to crack. Also, repeatedly removing the screws or over-tightening them can cause the threads to lose purchase on the holes and result in a loose/failed attachment.

In this case a "plug" material--generally metal, but also plastic or even wood--is placed in the drilled hole and expands when a screw (or other fastening mechanism) is introduced to force the plug outward against the sides of the hole.

There are a lot of configurations of this and products sold by multiple manufacturers that range from light to extremely heavy-duty. The "classic" method was for a worker to drill a hole and insert a piece of wooden dowel into the hole to receive a screw. The screw would expand the dowel as it was driven in, and wedge the dowel against the sides of the hole to anchor the screw. Definitely "old-school" but I had shelves in my basement that were hung with screws into dowels for about 100 years until they were removed.

These anchors are inserted into a hole that goes through the object being attached and then into a hole in the block. The "pin" is then struck with a hammer to expand the end of the anchor that's buried in the block causing the anchor to expand and wedge into the sides of the hole. Be cognizant of the length of the anchor as it projects through the object being attached to the wall and how far it extends into the hole in the cinder block. The packaging will tell you what size holes to bore. 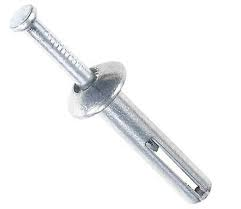 These are a variation that uses a wedge to expand the sides of the anchor as the screw is tightened, pulling the wedge through the anchor body and causing it to expand. Once it's tightened the nut can be removed and reattached to hold the object to the wall. 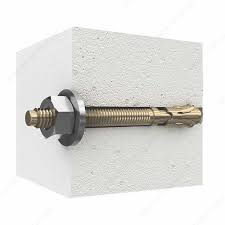 Both styles work well for cinder blocks and range from small diameter plastic sleeves for light-duty applications to heavy-duty anchors that use nuts tightened on a threaded shaft to expand the anchor inside the hole.

You'll want to pay attention to the length of the anchor if you're going to use this on any hollow parts of the cinder blocks. Unless these anchors have a surface to compress against (i.e. the sides of the drilled hole) they don't work very well and may not be able to be drawn down. You'll also have to consider the thickness of what you're attaching to the blocks.

If the wedge-style anchors are drawn down too tight they can cause lower quality cinder blocks to crack. 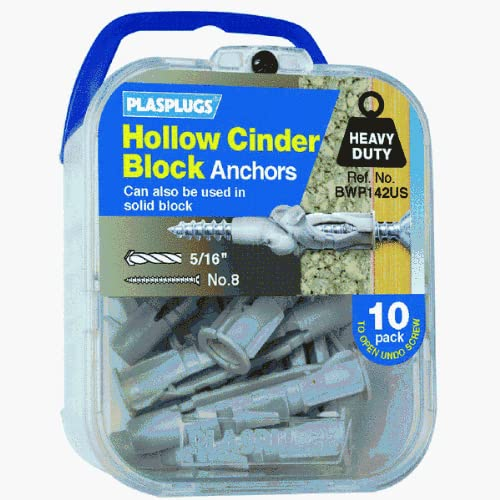 You won't be happy with these. They suck.

These kind of anchors rely on going through the wall of the cinder block and expanding within the hollow area inside. This won't work if you have solid cinder blocks or are trying to locate the anchor in part of the block that's not hollow. 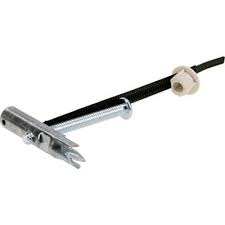 Essentially you drill a hole in the block, insert the anchor (while attached to the screw/bolt and allow the internal portion to expand and grab the inside surface of the block. This gives you something to tighten the screws against.

Here are some examples. With this one, you drill a hole in the block and insert the anchor while holding on to a nylon handle. You tighten a retaining collar against the outside of the hole while drawing the anchor tight against the inside of the hole. The collar holds the anchor in place until you can insert a screw through the item you intend to hang on the wall and tighten the screw into the anchor.

It sounds good on paper, but I've never had stellar luck with these. About 1 in 3 just don't line up right or the nylon "handle" breaks off causing the anchor to fall into the void of the wall.

These work by drilling a comparatively large hole in the hollow part of the cinder block and inserting the compressed "wings" while attached to the screw and the screw inserted through the board you want to anchor, into the hole. Once they clear the interior surface of the block, they expand and the screw can be tightened against the wings. 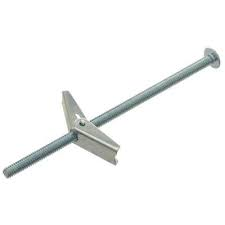 You can drill a hole through the entire cinderblock and put a threaded rod with nut and washer on the other side, but that'll need your neighbor's agreement.

Otherwise, the strongest will be chemical anchor, it is also the most expensive and time consuming to use. The part that sticks out of the wall is a threaded rod, so you'll need to push it in to the right depth and drill a hole for the nut and washer in the 2x4 to make sure the nut doesn't poke out of the wood. 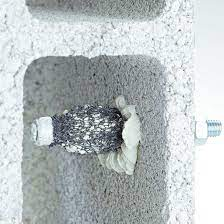 You can also use Mollies 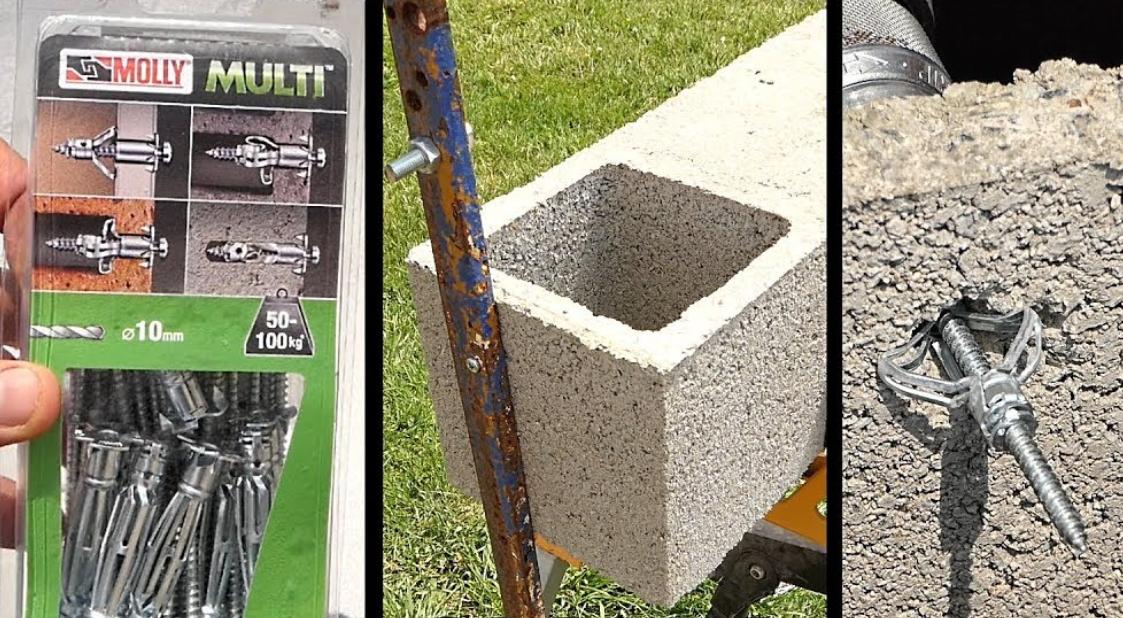 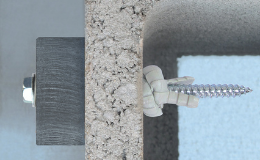 Since the 2x4s will be supported by the wall along most of their length, it makes no difference whether you lay them flat against the wall or narrow side against the wall. The wall will also prevent them from warping, but for that you need at least one fastener on top, one on the bottom, and one in the middle.

However if the wall is not flat, not plumb, or has mortar sticking out between the cinderblocks, you'll need to put some shims behind the 2x4s to adjust.

The 2x4s should not touch the ground to keep them dry, leave 1" or so.

Not the answer you're looking for? Browse other questions tagged walls outdoor cinderblock or ask your own question.