Hi all and thanks in advance for any tips given. I am doing a bit of DIY repairs of my leaking shower. Long story short I had to take down tiles, plasterboard, shower tray and replace part of subfloor damaged by the leak. Now putting it all back together again I aim to make it as waterproof as possible so would not have to suffer from the same a few years later. So far all is good and I'm at the stage ready to put tiles (large and heavy) back on the wall.

For the waterproofing among other thing i used tanking system Mapei Shower waterproofing kit . Which is basically a waterproofing membrane with flexi jointing tape which is to be applied across the perimeter. Next stage is to tile the shower and put silicon across the bottom edge.

This is how it looks currently: 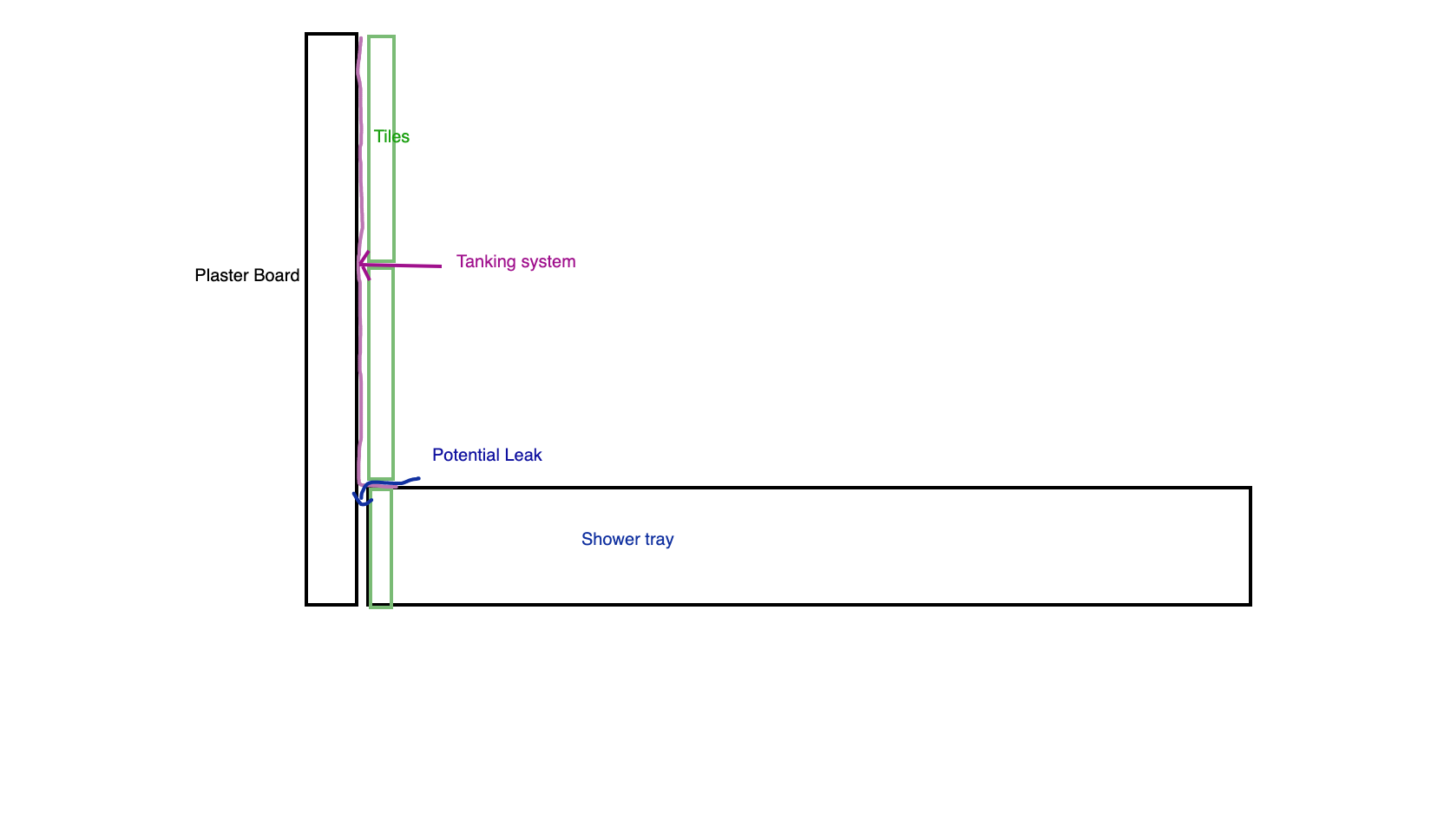 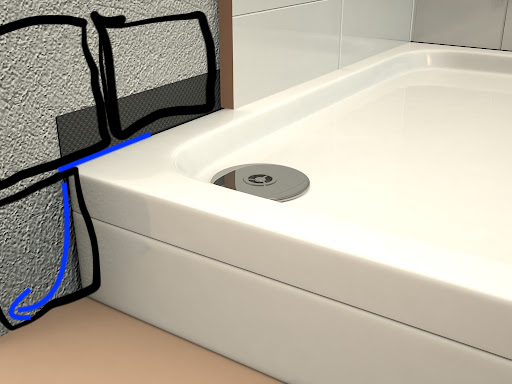 With tiles being put into the shower such a leak would seem to go undetected behind the tiles and onto the subfloor again.

Is there a method, solution, system I could use to prevent such a leak?

Thanks you in advance for any tips!

I see you applied the Mapei kit correctly, that should work fine.

You need to make sure there is enough support below the shower. So, while you crawl on the floor to see the corners of the shower tub up close, have someone step in and out of it. The shower tub should not move down at all from the person's weight. If it does, it will eventually rip the membrane and the silicone, and it will leak. It will also flex your drain pipes, which may also cause trouble. So, check this first. If needed, add more support below the tub.

What I usually do is install the faucets and shower not in the center of the wall, but much closer to the open side of the shower. This has two advantages: first you're less likely to smash an elbow into the faucet handle, and second the water from the shower is directed towards the rear wall, not the open side. But you can't do that, since it is already installed and tiled.

Next check the level of the bottom of the tub. If the sides are level, then the bottom should be sloped towards the drain, as you'd expect, but it doesn't hurt to double check.

Now if you install a shower door, it will usually come with a frame, and that has a part that you will install on the bottom, on top of the border of the shower tub, and that will prevent water from getting out. This is usually quite flimsy and just waterproofed with silicone caulk, so it's not the most reliable stuff. I've had trouble with these.

I did a shower like that in a rental. There was a folding glass door that was cumbersome to use and often had leaks. So I trashed the door, and instead I just built a little wall in front of the tub. It's about 10cm high, 5cm thick, so it's very easy to step over to get into the shower. It's just a block of ytong with tile on it. Having a little wall in front of the shower means I could apply the same Mapei stuff on the 4 sides. It also makes the tub deeper, so even if the drain is full of hairs, it won't overflow. But the best bit is that the wet shower curtain sticks to it on the inside, and that keeps water inside. The wet shower curtain also sticks to the walls, which keeps water and hot air inside the shower, so there are no chilly drafts. It also makes the shower larger, since the curtain does not have to be hanged over the inside the tub to let water fall into the tub, rather it is at the edge. The tenant likes it.

First remove the drywall on the left corner and install cement board in place of it. You don't need to remove it all but get back to the next stud. Use a polyurethane based construction adhesive and an exterior rated screw to fasten the cement board. Then use a thin-set adhesive to fill out your corner bead. Thin-set products or water tight and will not become unstable from the moisture. If you bring your wall tile out to that corner you can treat the thin-set with a waterproof membrane before install the tile over it. Keep in mind these are measures to prevent future problems but if flooding of that corner exists then be sure to check your silicone seal periodically in case the seal needs a fresh bead of silicone. There will always be moisture against that location of some sort but the cement board and thin-set products will be the best products for the long duration. I always told my customers before leaving that a little preventative maintance goes along ways.

Not the answer you're looking for? Browse other questions tagged shower waterproofing sealing tiling or ask your own question.

2
How can I fix my leaking shower?
6
Should I redo my bathroom shower or try to waterproof it?
3
What can I do about water leaking behind the shower tray?
2
How high is shower waterproofing treatment supposed to be?
1
Tiling under shower
1
Tips on Using Epoxy Grout in Shower