Angle Braces In Place of Stud

edit: Not an expert on the subject, but I think my question could be “reframed” as what are framing options when you can’t use a king stud on a load bearing wall? I believe tried and true solutions are the framing techniques for a door or window, but could angle braces suffice?

After opening our (external, load bearing) wall by the washing machine, we found one of the 2x4 studs pretty much has a 3” drain pipe going through it. The wood is also rotted around the pipe.

Assuming regular framing everywhere else (no rot, no strange spacing, no extreme loads), the codeworthy fix for this is a stud shoe. 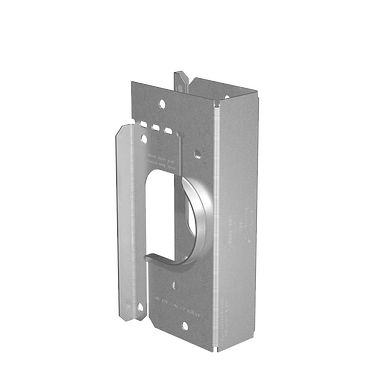 As always, check with your AHJ to ensure that this fix meets their standards.

Not the answer you're looking for? Browse other questions tagged framing studs or ask your own question.

6
Is it OK to drill through a jack stud/full stud pair to cut a hole for water heater drain pipe?
4
How can I remove a stud from a load bearing wall?
3
Notch Stud for Electrical Work Box
1
Sideways king studs!
2
Can I add strips of lumber to studs in a framed wall to meet plumbing hole size limitations?
4
What are the steps to raising an interior wall header?
4
Basement rough-in PVC drain pipe is not centered with stud
1
Can a triple stud be replaced with a thinner, stronger material?
1
Single stud removal