My son recently bought a 100 year old house. We have been working on some framing repairs in the basement, and have some questions about the best way to sister some joists.

The joists in question are true 2”x10” lumber approximately 16 feet long (for the longest run). They bear on a 10”x10” wood beam that runs down the center of the basement, with a ~1” deep notch cut into the bottom of the joist, and extend to the outside wall. On the outside wall, they were also notched to sit on the sill plate.

Sometime in the past, the sill plate in this part of the basement was replaced. My son discovered, after removing some insulation, that the joists were no longer resting on the new sill plate. In some places the joists seemed to be short of the sill plate. These joists are also supported by a 4”x4” post (used as a beam) at their mid point, which means they are basically a long cantilever. We think this beam was added to support the joists which no longer rest on the sill plate. Oh, and some of the joist are split at the sill plate end. The sketch below tries to show this. The blue beam is being used to raise the joists to their proper height. New sketch showing another beam, in blue 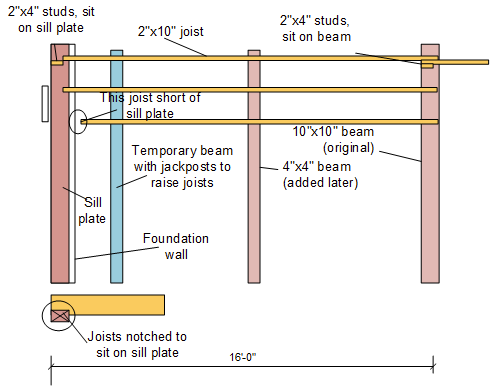 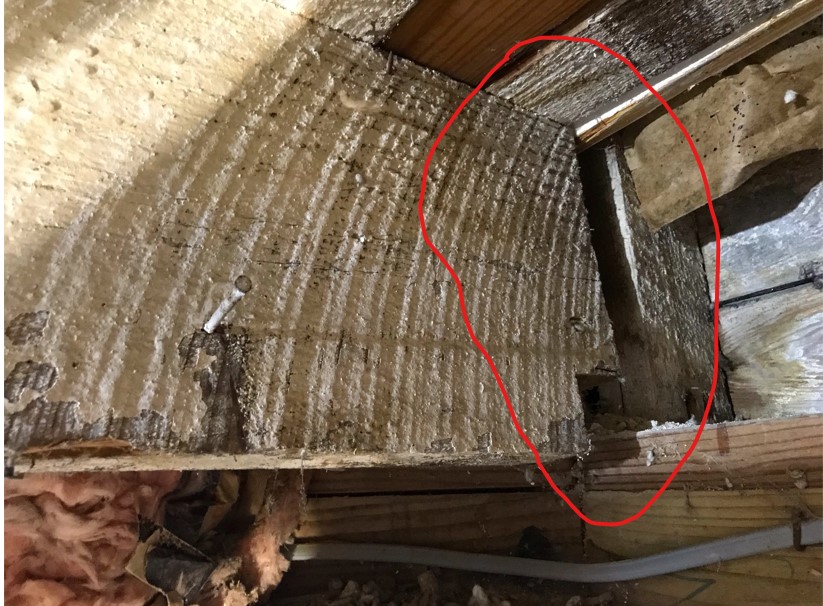 The question is would we better to use a full length (16’) 2x8 as a sister, or an 8’ 2x10 that only sisters the bad end of the joist, the end that would rest on the sill plate? In either case, we want to remove the "added later" beam (shown in the light purple), so that the run from the main beam to the wall is uninterrupted.

Here's what we ended up doing. We sistered ~8' of the damage end of the existing joists so that the sistered joist (2x10), with the notch, would rest at the proper height on the sill place. 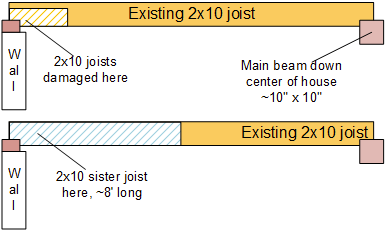 Yes. I have met your problem. Let's not make a crazy hard job out of this...

The problem is the ends of the floor joists are not properly supported and where they are, the notch at the end creates a place for the wood to split. They don't grow trees like they used to.

Attach a 2x6 flat to the wall below the floor joists to hold them up. If the joists have moved downward (which they probably have), Create a temporary beam and use a jack as needed to lift the floor joists back to where they belong so that the 2x6 can be installed in the proper position, then lower the floor down onto the 2x6.

I hope you can imagine what I am saying...

I am going to assume that the wire in the large picture is attached to the wall and the 'floating' 2x10 is the floor joist:

Now the floor joists are sitting on the 2x6. Hopefully, the reason (most likely water entry) that lead to the replacement of the original sill plate has been repaired.

In cases where the floor joist is still short:

If the floor joist is still short, then 'sisters' will have to be used, but they don't actually have to be a full sister joist. They can be rather short.

Consider the cantilever: I was once told that I had to grab twice the meat with secure support as I was extending outward without support. I believe there are a lot more factors involved, but I keep the basic idea in my mind and use it.

Example: If you were to assume that 8 inches remained to reach all the middle of the sill plate, then you would need 16 inches secure grab. Keep in mind that the 16 inches is NOT how long the sister extends against the existing joist, it is the 'actual attachment distance'.

Explanation of 'actual attachment distance': You want a secure hold, so you choose to use bolts and add nails later just to ensure a good overall bond. The distance goes from the sill plate you want to transfer the weight to, until the first bolt. Now, you are no longer 8 inches away, but you are 10 inches away. Therefore, twenty inches later is the closest you need a second bolt. It, the the first, needs to grab the meat of the wood, so the sister needs to be 2 inches longer. 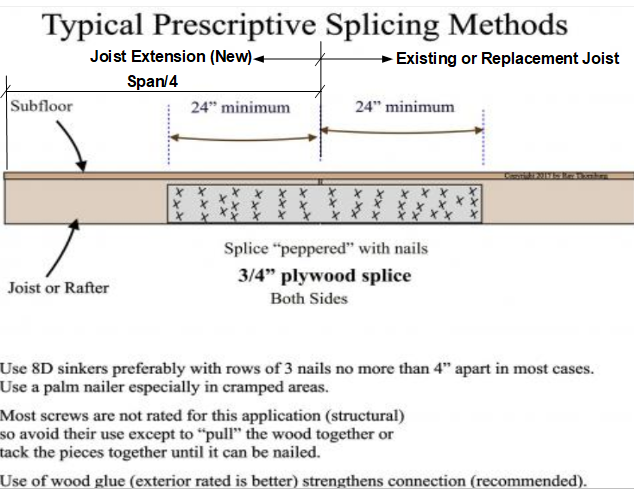 For your case, the extension shall be 48" long (16*12/4). To avoid the chance to split the wood, you may look into the splice hardware provided by the vendors such as "Simpson Strong Ties".

You cannot make a splice in a floor joist in the middle of it's span and expect that to be sufficient. The middle of a span is the weekest location in that floor joist. A floor joist can only extend 1/3 of the distance of the total span from beam to the foundation wall. If you want a 2' cantilever then a floor joist needs to be a total length of 8'minimum from bearing point to bearing point. The area that needs a patch or repair cannot be fixed without providing a new bearing point for the new load distribution. The new floor joist patch will involve new floor joist for the entire span and should coincide with the exterior wall studs from the balloon framed exterior walls. They should be glued and nailed with 4 16d nails vertically at every 12" spaced rows. Before nailing I would draw the joists together with some 1/4" lag bolts every 2'-3' or as needed. Then install the nails. Glue heavily with a polyurethane-based CONSTRUCTION Glue like Liquid Nails construction glue. Do not buy the inexpensive lines of their glues as they will not be designed for your application.

The design of balloon framing vs. platform framing that is used in new construction these days are not designed with the same structural values. Balloon framed walls need to be tied to the floor joists to keep your structural elements locked together as one. When you place a load bearing wall on top of concrete there also needs to be a load bearing footing under the concrete floor to support the new load points. The older homes with the rough sewn lumber will not be the same dimemsions from one to another. The carpenters cut those notches accordingly so the top of the floor joist are in a flat plane and the basement ceiling will be irregular. They didn't care because no one used the basements back then as a living area. You will have to lift each floor joist one at a time because if you get the basement ceiling completely flat, then your surface on the top of the new floor joist will develop a floor that is not flat. Remodeling requires comprimising the issues but still completing it so you have a safe structure when you are done.

Not the answer you're looking for? Browse other questions tagged floor joists or ask your own question.

1
Attic Floor Joist - Structurally Secure
1
floor joists splitting at non-beam end
1
Sistering a split joist not code?
4
Could I cut out the affected area in a termite damaged joist or would I need to replace the whole joist if it's rotted at the end