I recently had my a/c system replaced with a heat pump system (Less than 2 weeks ago). The original was a 2.5-ton a/c. The new system is a 3-ton heat pump. I'm now having all sorts of drainage issues with the air handler and would like to confirm if the installation is incorrect. I don't have experience in HVAC, but after some research I can tell that it was done very poorly. I would like to better communicate the issues to the next crew that I hire to fix the issues.

The home only has 1 giant return duct, on the second floor in the hallway. The air handler is above the return, in the attic - mounted horizontally. A few days after the install, I noticed water dripping out of the return duct from the ceiling. Went up into the attic, and the secondary drain pan was dry. Opened up the air handler and saw that it's flooded with water. I called the installer back, only to have them bandaid the real issues with some slight modifications (explained below).

With the unit running, I stuck my head into the return to watch for water and can see that the blower is sucking up water out of the drain pan, and there are droplets of water that seem to be falling directly onto the blower housing - missing the drain pan.

I noticed the following things when I looked over their work (some of which I'm not sure are valid issues):

Attached are photos of the install. Would appreciate any comments and advice on the above. The P-trap would be a pretty simple fix, but I'm really curious about the potentially backwards evaporator. Should I only focus on fixing the P-trap and not worry about the orientation of the evaporator? Thank you

Air Handler layout: Air flow from left to right in photo (return is on the left). 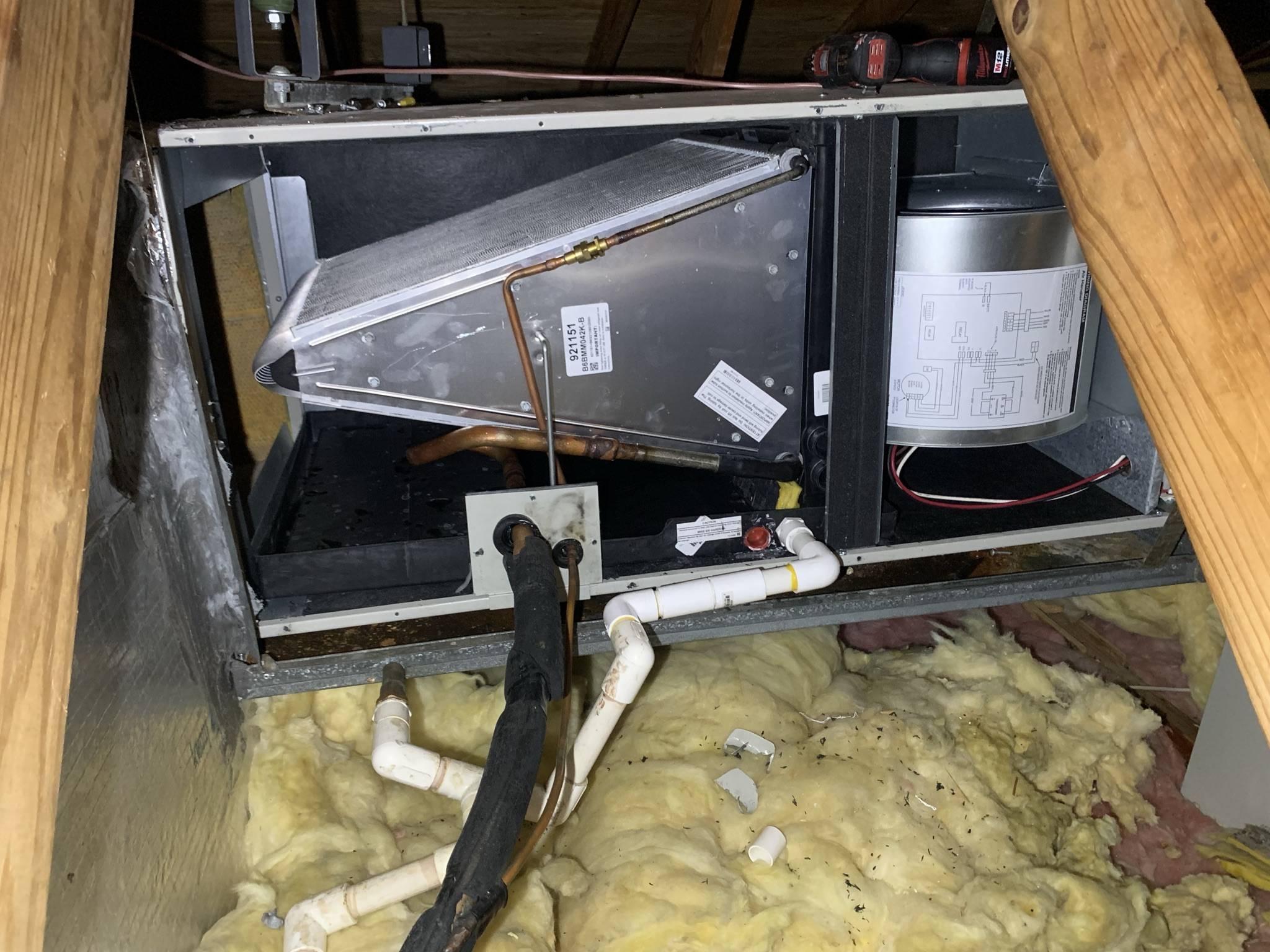 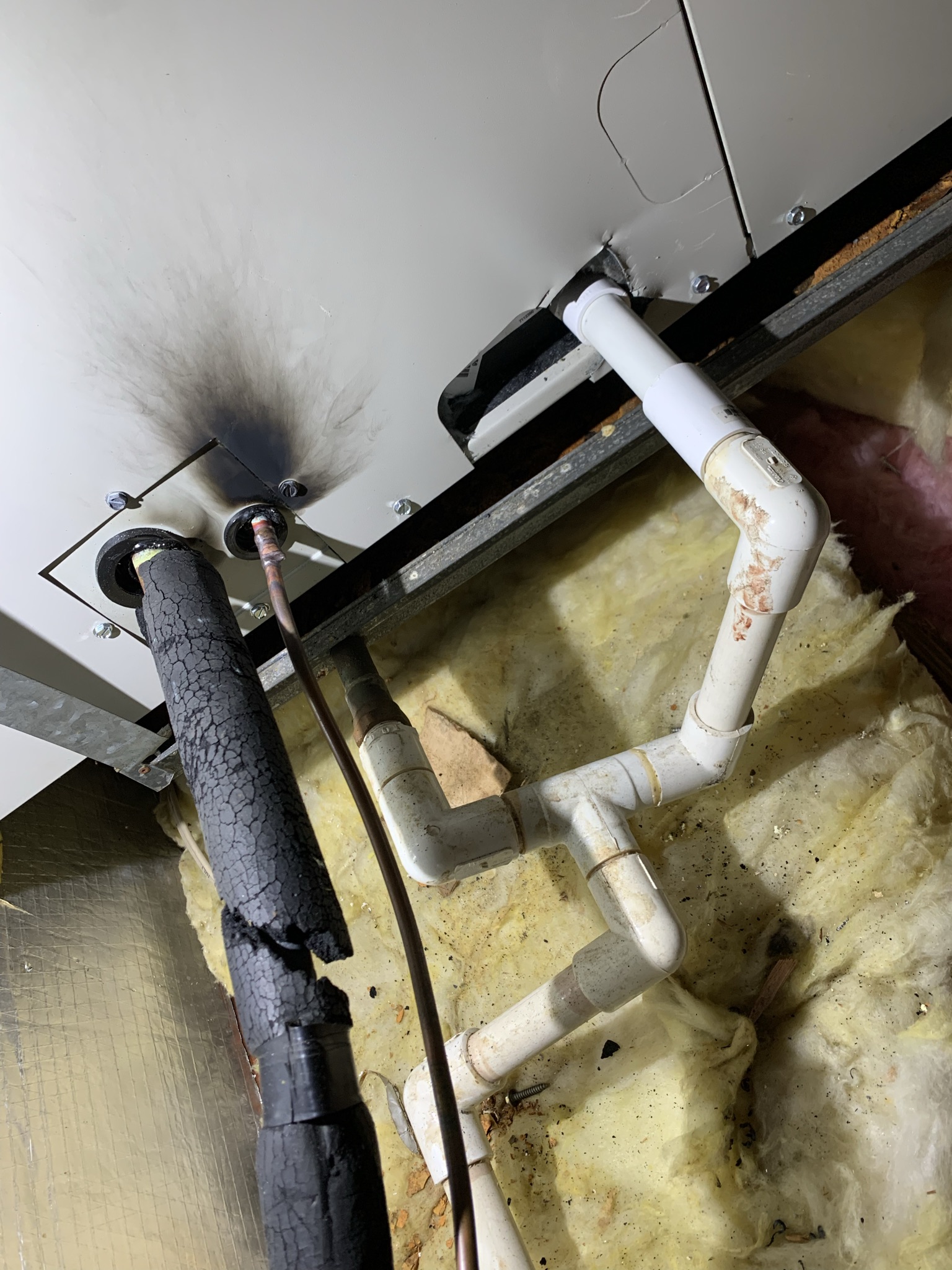 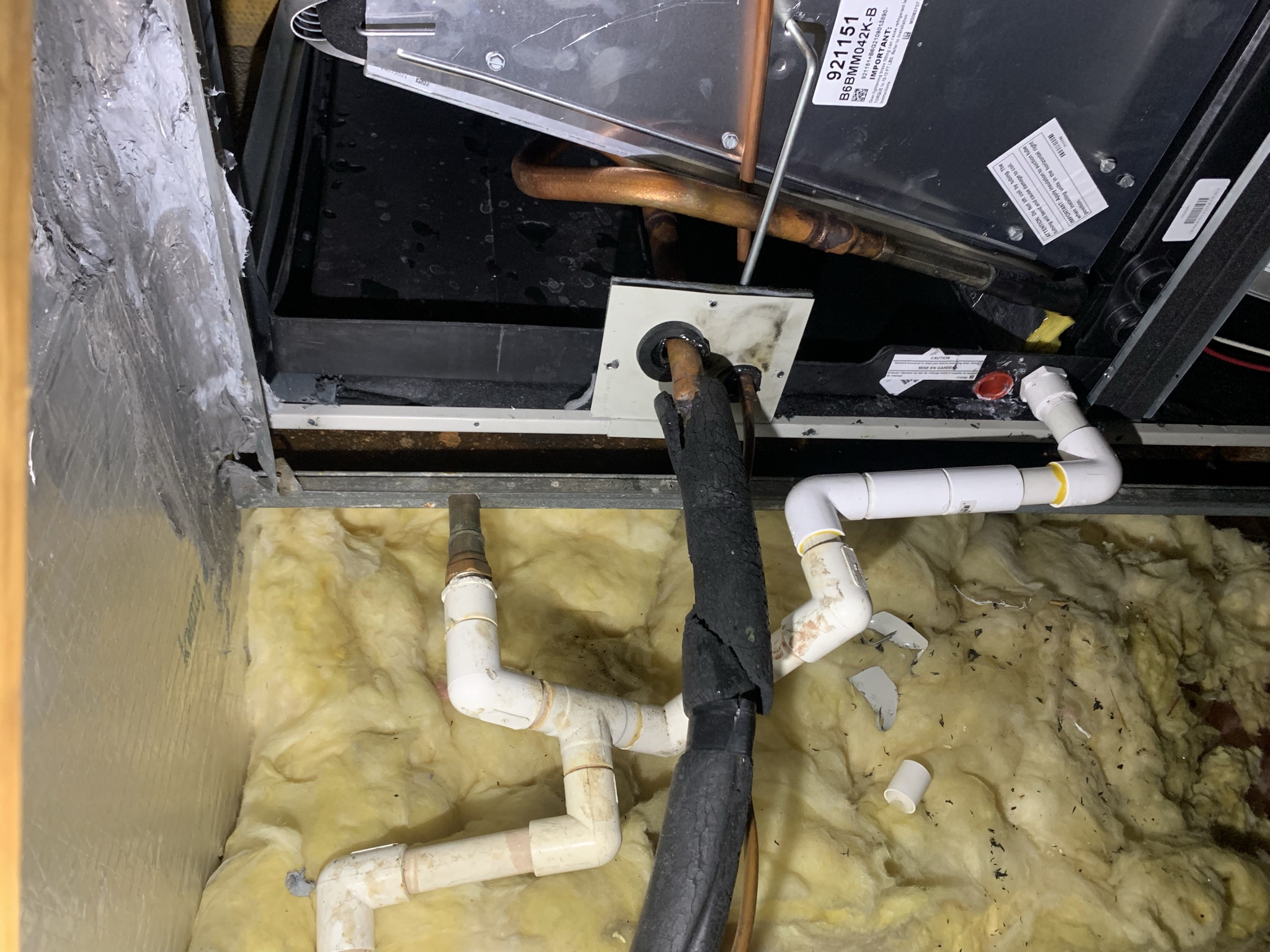 Unfortunately my changes to the P-trap didn’t fix the main issue:

Thanks for any further suggestions.

So, yea, there are a few things wrong here, and the giant burn mark on the front panel is the first indication of this being a bad install. I don't care if you do get some soot on a panel while soldering/brazing - clean it off! Anyway...

As for the blower sucking water out of the drain, there are different air handler configurations, but if the drain is under negative pressure, this must be accounted for when running the drain. Sounds like they messed that up as well.

Not the answer you're looking for? Browse other questions tagged hvac water leak condensation or ask your own question.

0
How can I properly drain heatpump condensate?
2
How should I wire a Trane air handler & heat strips?
3
A/C Air Handler Leaking Water Everywhere
3
How can I fix a leaky A/C evaporator?
0
Why does AC unit need condensation drain trap?
3
Anyone installed a hot water coil in their HVAC ductwork to increase heat pump efficiency?
1
How to I eliminate the smell coming from my Mitsubishi mini split units?
0
Why is the second condensation drain on my central air unit active all of a sudden?
0
a/c condensation line not draining