When am I *required* to add a neutral to a three-way switch, and what is the best way to do so?

I have a 3-way switch wiring situation that to my understanding is no longer to code because there is no neutral wire in one of the boxes - for some dimmers and smart switches, I would need to add a neutral.

I am planning to replace the three-way switches for cosmetic reasons and also replace the existing fixture with several recessed lights. I don't plan to add a dimmer now (just 'dumb' 3-way switches), but I suppose it is always a future possibility.

1) How much work triggers an obligation to bring it up to code by getting a neutral to each box? My understanding is that adding the new lights would likely require me to do so (along with upgrading breaker to CAFCI), but would just the simple act of replacing the switches also require getting up to code?

2) Assuming I decide to run a neutral, what is the best way to do so, given how it is currently wired?

Everything is NM cables. Currently, line in from panel comes into a 3-gang box. It feeds two unrelated single fixture switches as well as the 3-way switch's black common screw. 14/3 connects to the far 3-way switch (in a single gang box), with black and red travelers. The white wire is connected to the far switch's black common, and when it returns to the 3-gang box it is wire nutted to the black wire that feeds the light fixture (so it serves as hot). The white wire that returns from the light fixture is connected to the white neutral from the line in from panel (as well as the other neutrals from the other loads in the box). 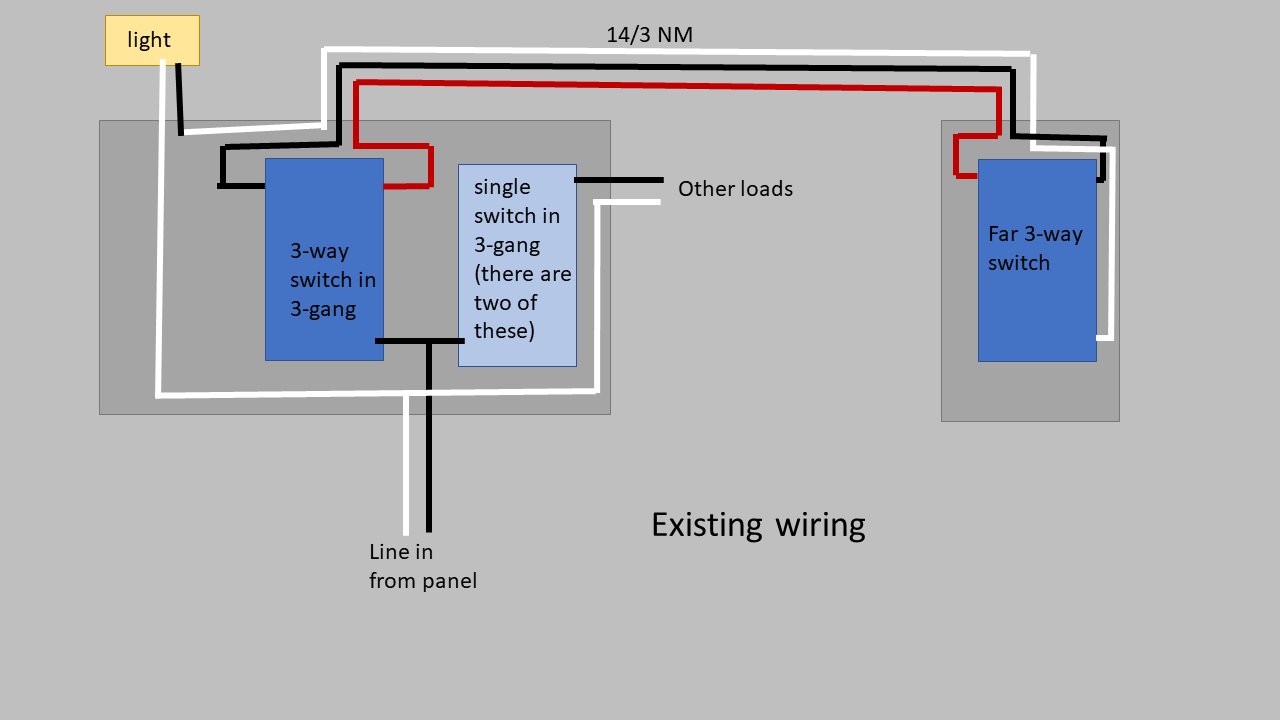 So, my 3-gang box has neutral available but my far box does not. The two options to fix this that I can think of are to:

A) run neutral to far box on the white of the existing 14/3 and then return a new run of 14/2 to the 3-gang (which will then be connected to light fixture feed).

B) run a new 14/2 line from the panel to the far box, then use the existing 14/3 to bring travelers and neutral to the 3-gang switch, which then feeds the light fixtures.

Are either of these better options? Are there others I am missing? For access reasons, B is easier to do, but it would likely be on a different circuit, which would mean the 3-gang would have two circuits in it. I know that's fine, but I wonder if one tends to try to avoid doing that?

I am very much on the learning side of the curve about electrical wiring but am enjoying it and want to get things right, so any help or insight you have will be most appreciated.

While the text of NEC 404.2(C) isn't the clearest on this, in most multi-way switching situations, you can get away with only having neutral available at one switch box. This is because 3-way smart switches either use a mechanical remote switch that only needs a couple of wires run to it, or a proprietary remote that uses a single-wire setup to communicate with the "master" switch in addition to hot and neutral.

3
3-way switch for light with fan controlled by switch built into fan. Odd wiring layout. Wiring assistance required
2
Three-way switch circuit between house and barn - how to wire
3
What is the correct way to wire a 3 way switch where power comes into the middle switch?
0
How can I add wiring to get my three-way switch to work properly?
3
Light Fixture Stopped Working After Replacing Its Three-Way Switch
1
Convert Three-Way to Single Switch and Add Smart Switch
3
TWO ORIGINAL SWITCHES - ONE three-way and one single cant figure out wiring for SAFE UPGRADE
0
Three Way Switch Weirdness
2
Help figuring out this three-way switch
0
3-way smart-switch installation: How do I re-claim the white (currently) traveler to be a neutral?