Why are two GFCI receptacles used instead of one GFCI which protects itself and a second plain receptacle?

A very recent book on wiring shows two GFCI protected receptacles wired together in close proximity over a countertop.

I expected the wiring would be:

Why are two GFCI receptacles used instead of one GFCI which protects itself and a second plain receptacle?

I have attached a picture. Please tell me if that violates any copyright laws so I can remove the picture. After studying the picture, I wonder if the answer to my own question is that this wiring allows the circuit to be extended beyond the GFCI receptacles using the same 12/2 cable. 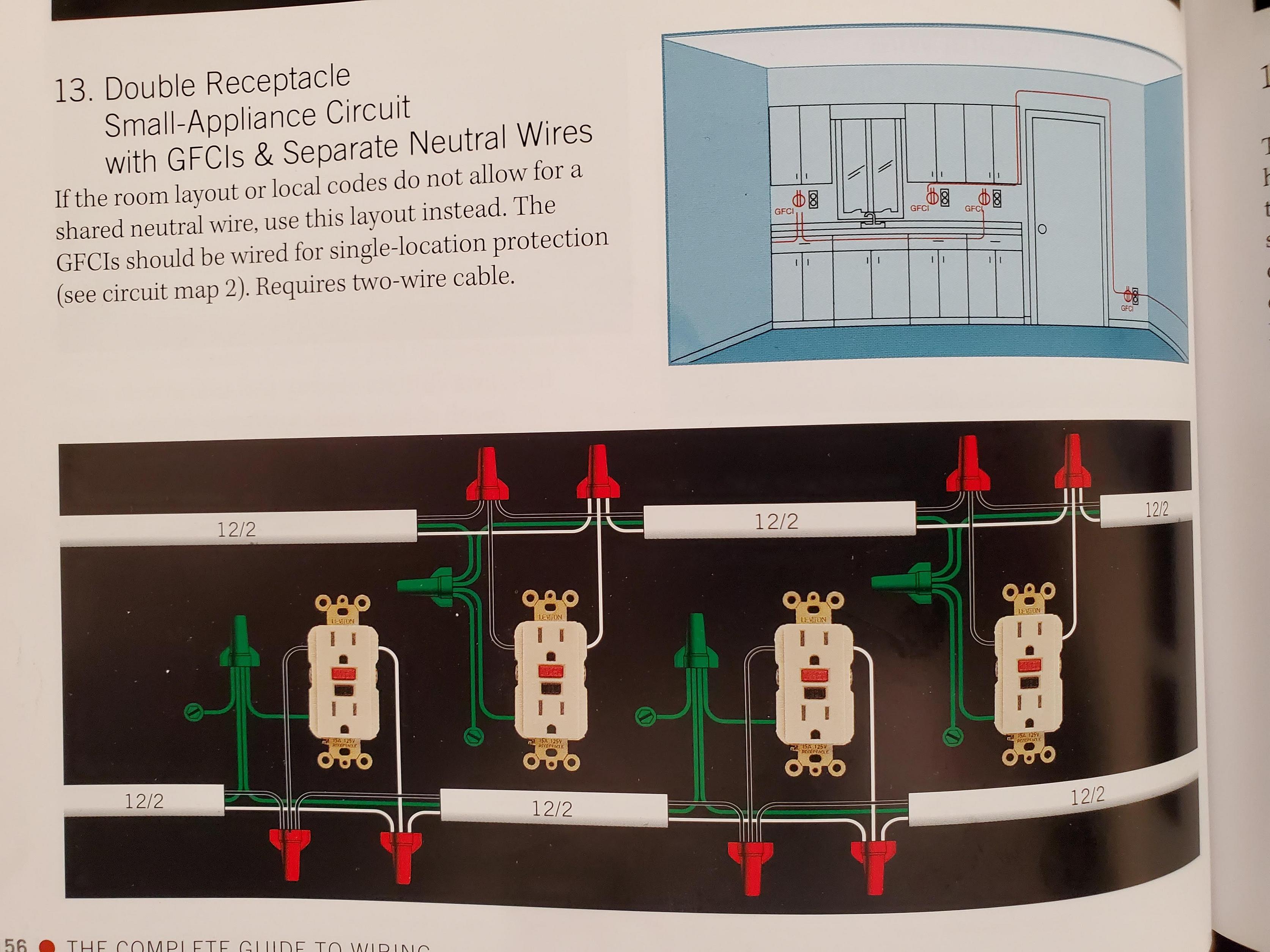 Because of the way the book flows its discussion. You're showing us their second "alternate" scenario. Their first "primary" scenario is a Multi-Wire Branch Circuit (MWBC) in which the individual GFCIs would be required due to the shared neutral.

It is showing this as an alteration of that design.

They didn't want to introduce 2 new concepts at once, because it would be more difficult to follow. So here, they introduce the single concept of turning the MWBC into two plain branch circuits.

Now that they've reached this point, they could have another alternate that explains how to use the downline protection system to reduce GFCI count.

Using the downline protection feature of GFCIs isn't always/automatically the right thing to do. There are instances where it's not suitable, such as:

Yeah, a tripped GFCI would kill power to the downstream outlets, but so what? Just reset it. Just don't put your fridge/freezer on a GFCI outlet (yeah, I know current code calls for it, or at least AFCI), but I still wouldn't do it. My bad, but hey.

It's a book that was clearly not written by a lifelong electrician or contractor. No contractor would ever make such an installation, simply for cost reasons. There is absolutely no measurable benefit to doing so.

28
How do I install a GFCI receptacle with two hot wires and common neutral?
1
Can I install two GFCI receptacles on a multiwire branch circuit?
0
How do I update two 2-wire switches housed in a single box? Both switches are combination switch and PILOT light
0
wiring a switch mounted next to a gfci
4
Bad GFCI or did I wire it wrong?
2
GFCI/AFCI Trips With No Load And New Wire
1
Wiring Options for 14/3 NM-B Cable and Two Single Pole 15 Amp Circuit Breakers
1
pigtailed wires downstream of a gfci
1
Receptacle upstream from GFCI with an issue causing GFCI to trip?
1
Moving bathroom fan on GFCI outlet