How do the pieces of this fiberglass tub surround attach to each other?

I have a Jacuzzi-brand tub with an integrated multi-piece surround that came with our house when we bought it. Probably installed in the 90s if not earlier, but I don't really know.

This bathroom is getting a full gut minus the tub, and my contractor asked me if I was interested in removing the top panel of this surround so that I could have the full height of the room when taking a shower. While more room is great, we both agreed that he needed to better understand how the panels of this tub were connected such that if the top panel were removed, the whole structure wouldn't loose rigidity and become floppy - or any other unforeseen change in the rest of the tub structure that would make it less functional. Because once that panel comes off, I don't expect it can go back on.

Below I have a picture of the tub, with the vertical panels making up the surround marked. We assume that under each panel is a flange from the lower panel that is nailed to the studs, and the flange height is high enough such that were water to make it into a seam, it would then drain back out via gravity. There is clearly a frame built off the studs immediately surrounding the the front edges, and if you look into the openings around it does appear that there's a flange going up behind the panels. 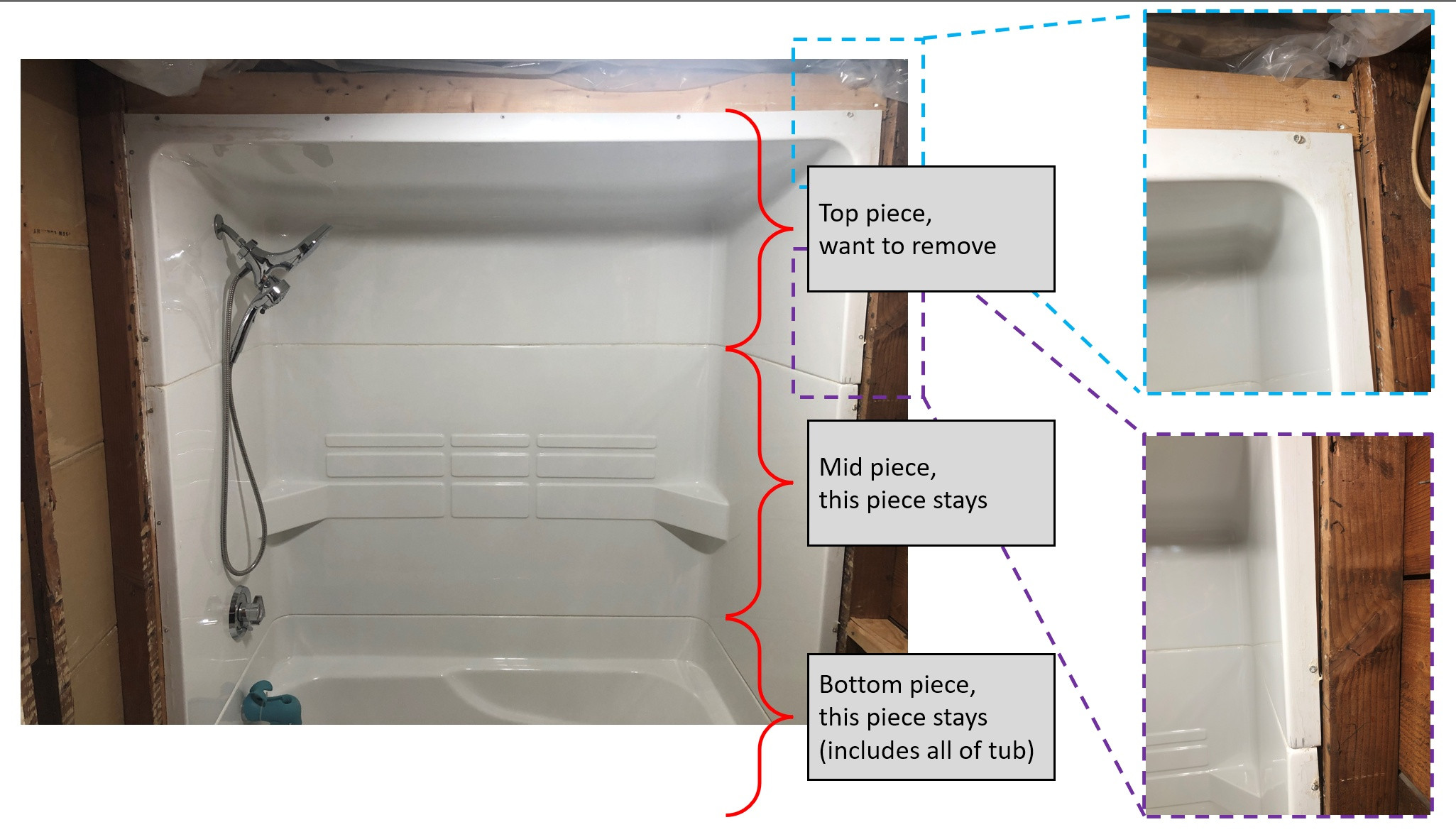 I was hoping to find some sort of reference to this type of tub online, but after scouring google images I'm getting either (a) tubs that are too new or (b) tubs that were made of multiple vertical-oriented panels, one per wall, rather than the horizontally-stacked that we're dealing with.

how the panels of this tub were connected such that if the top panel were removed, the whole structure wouldn't loose rigidity and become floppy

The top of each section should be secured to the studs with screws. An easy way to test if this is the case is to run a magnet along the seam and see if it is pulled toward screws at regular intervals.

Not the answer you're looking for? Browse other questions tagged bathroom bathtub renovation fiberglass built-ins or ask your own question.

2
How does the drywall meet a direct-to-tub surround edge?
3
Should I put vapor barrier only on exterior wall of a bathroom?
0
Can I remove a tub surround, without removing the tub?
4
Shower surround - does it need adhesive?
1
Tub installation/level questions
5
How can I fix cracks between the bathtub and the wall surround?
1
Should I remove and reinstall a Jacuzzi / whirlpool tub when replacing the paneling around it with tile?