Added 2 more photos, So I opened the ceiling up more on the living room side, the joists do run opposite of the kitchen, and there were TWO!! joists next to each other, which is pretty much what I was going to do if I removed the wall anyways, hmm does this mean anything to you guys? 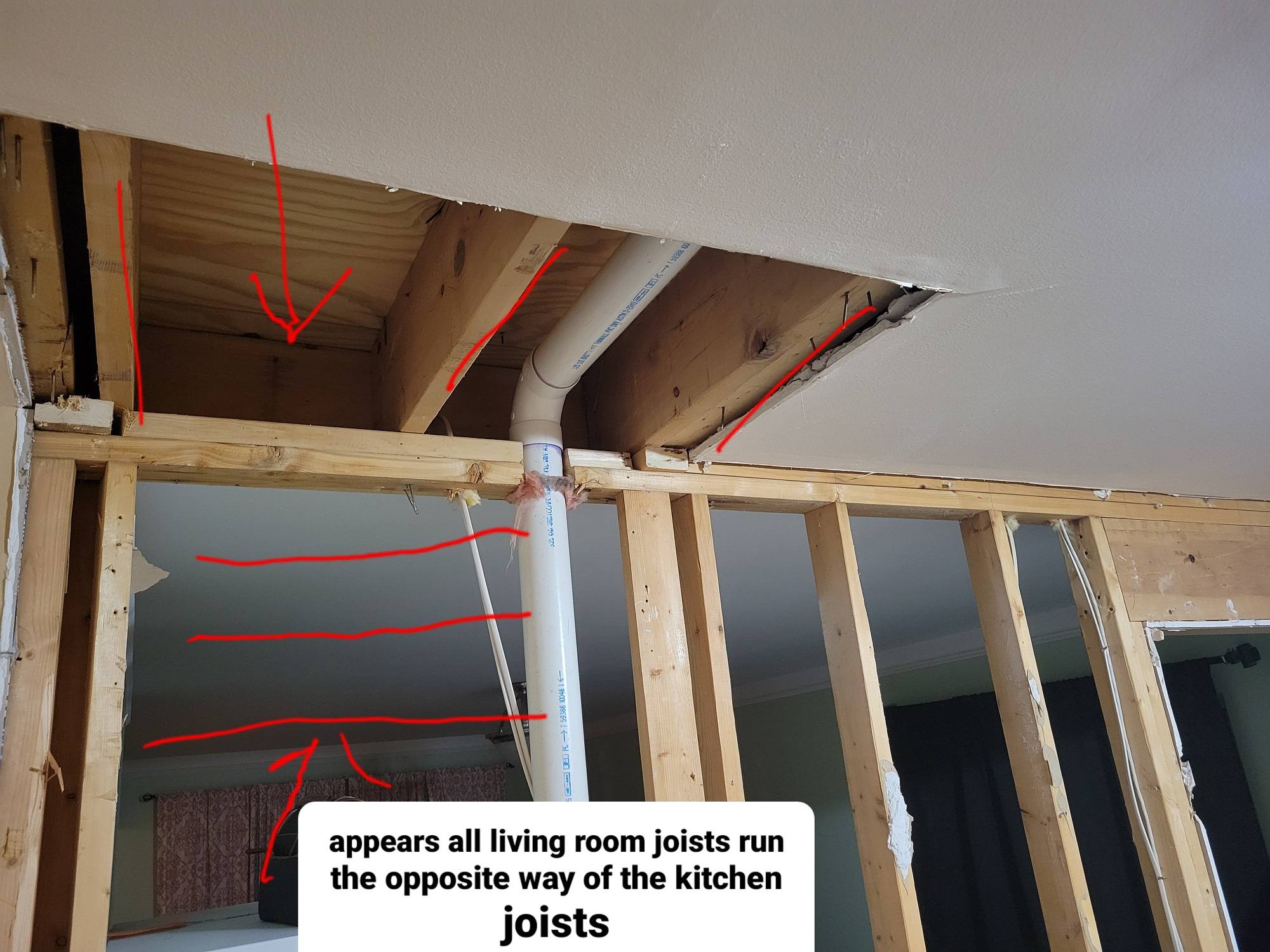 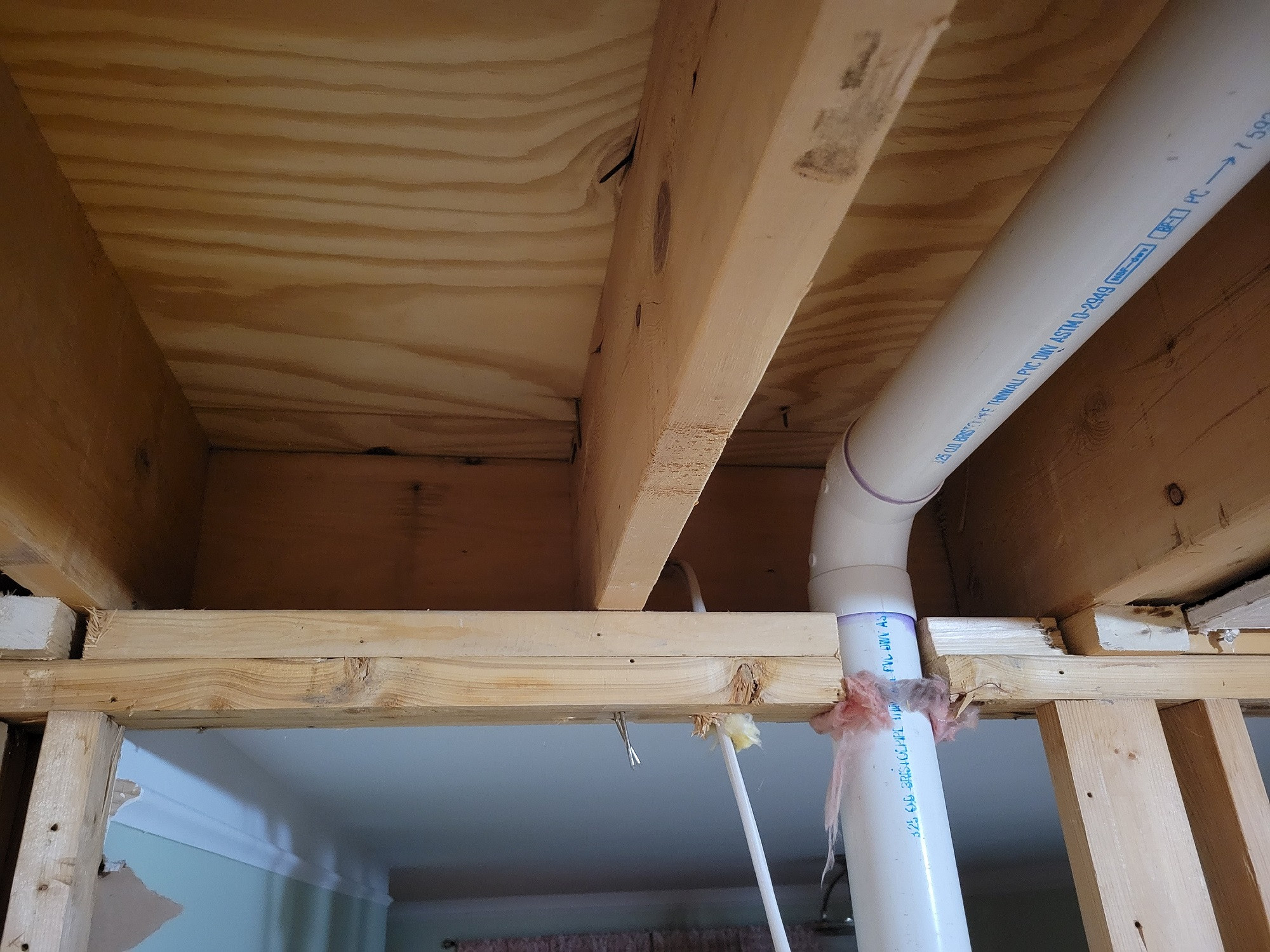 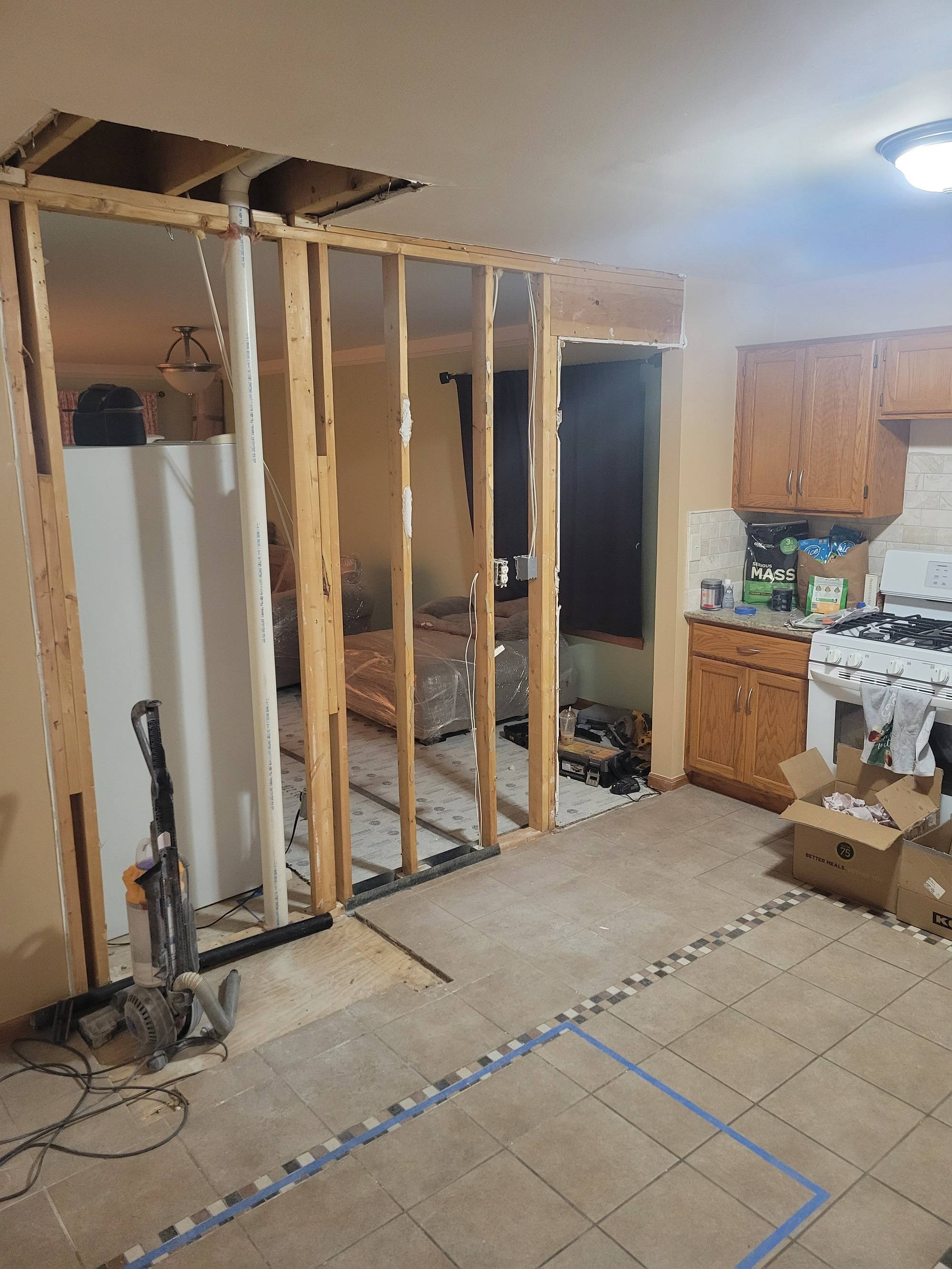 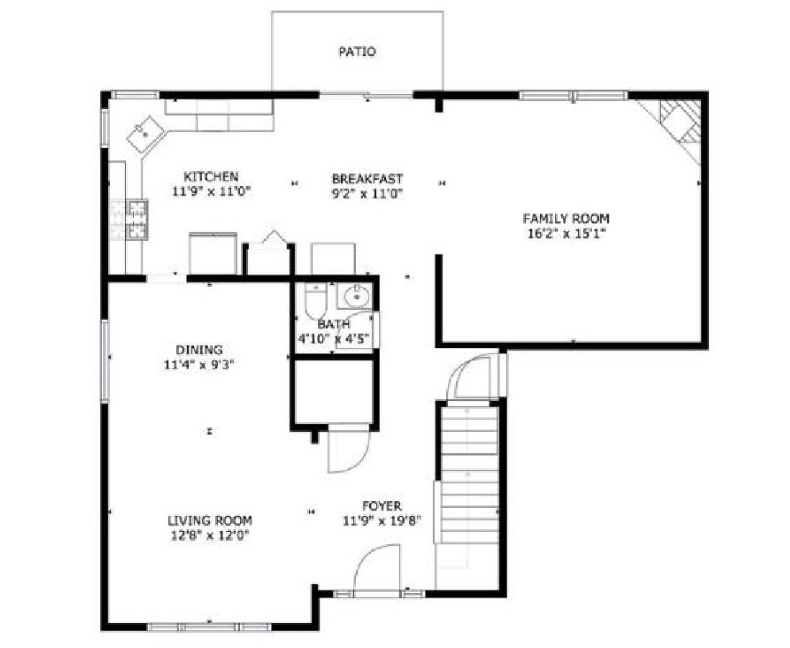 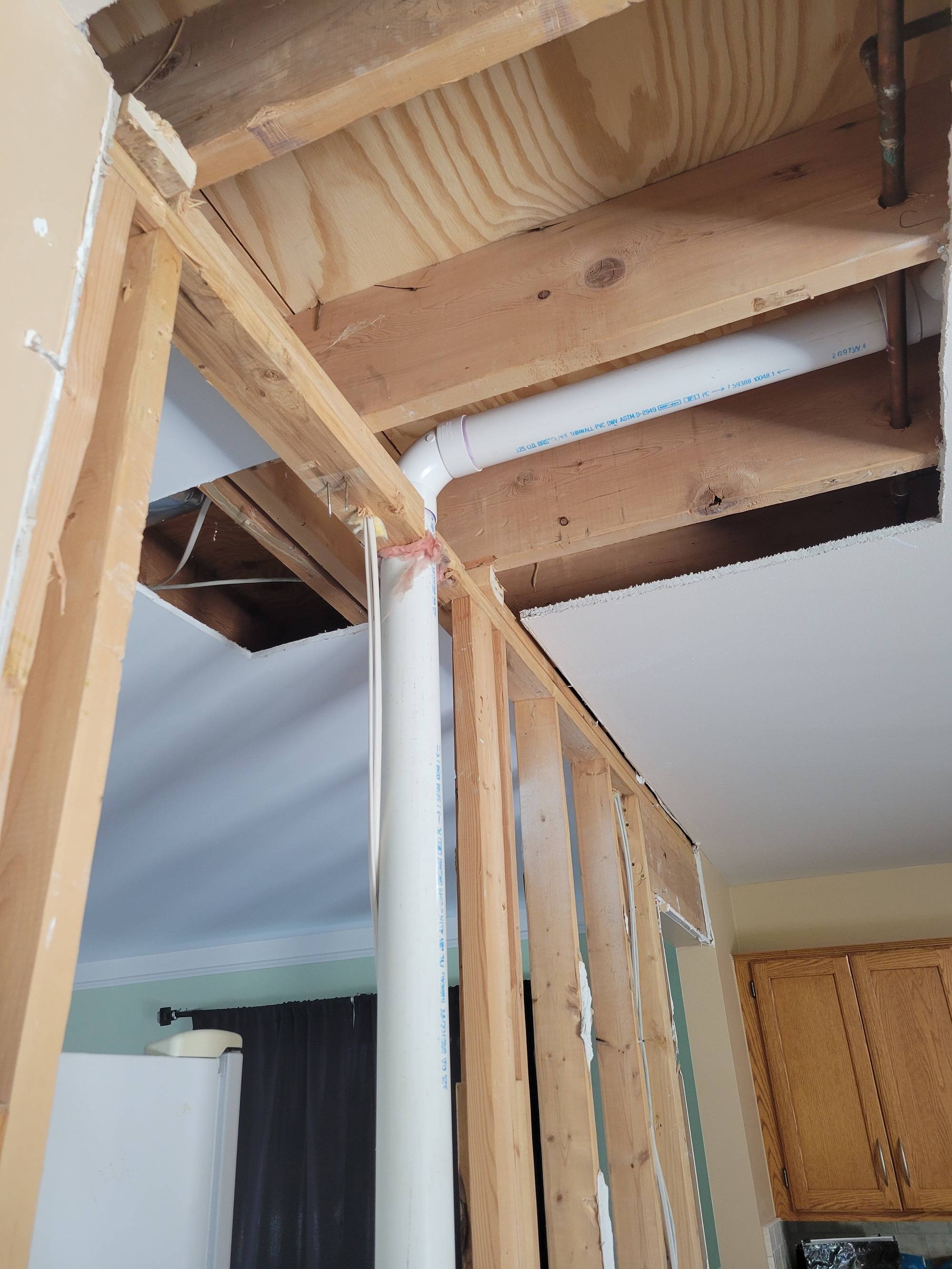 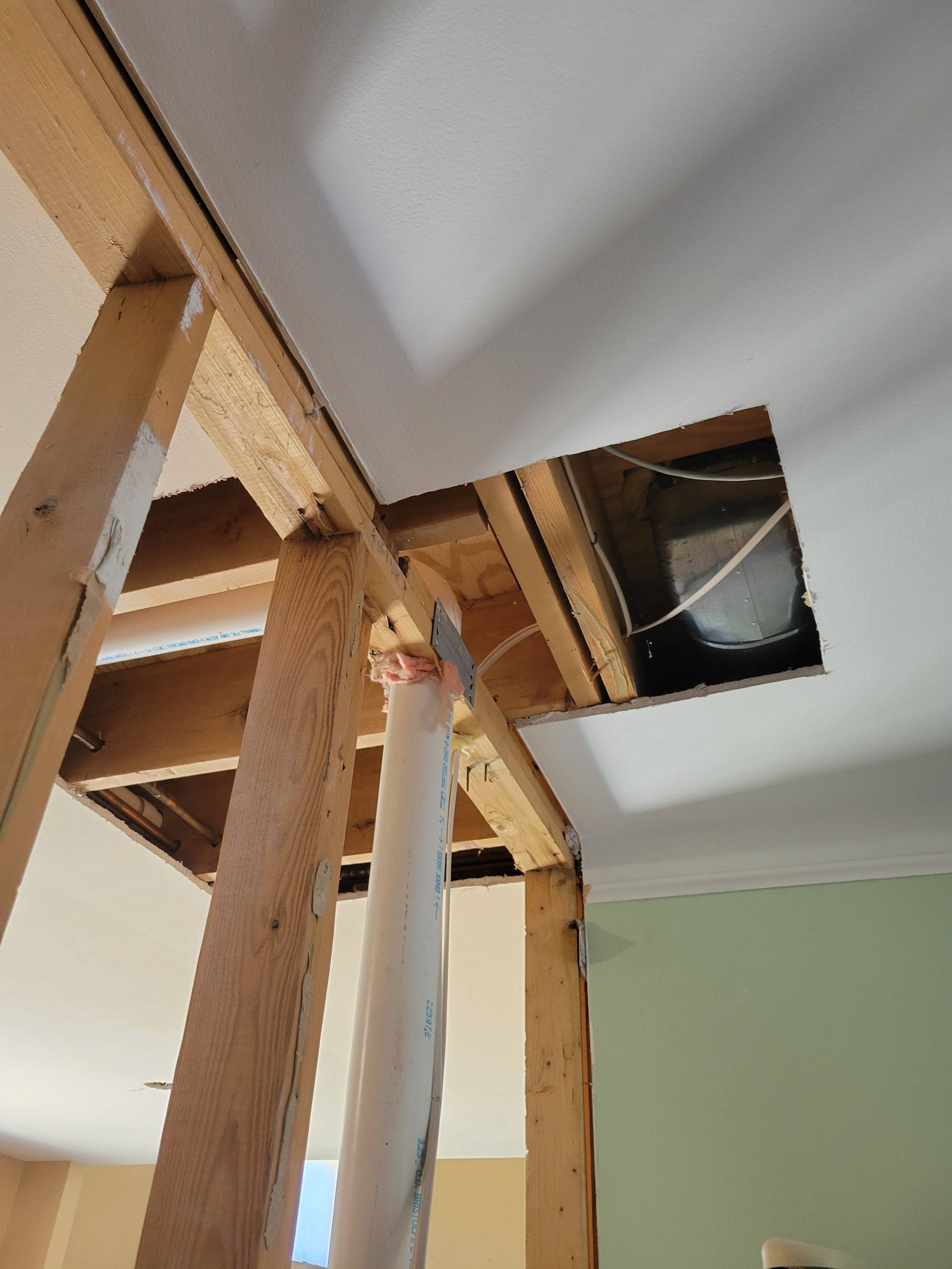 Yes that wall has the appearance of being a bearing wall:

That first living room joist as it stands now is almost certainly not up to the task of carrying the loads of all these kitchen joists. That said, all hope is not lost -- it'll just be a more involved effort to get the load transfer worked out. Doubling or tripling the first living room joist may be necessary. Use of an LVL (laminated veneer lumber, an engineered wood product) could help. Joist hangers will be part of the solution.

It might be possible to do this with "prescriptive methods" in which one uses tables found in the building code and/or tables supplied by the manufacturer in the case of an LVL. You may be able to work out a solution through study of those resources, but it might be a more efficient use of your time to engage an experienced contractor to devise a solution.

The alternative to prescriptive methods is to engage a professional engineer. Don't worry; they're not so expensive as it sounds. The process would likely involve you explaining your goal, the engineer directing which additional areas you'll need to remove drywall to expose the existing structure, and then the engineer could propose details for you to go and build.

Not only is that wall load bearing but it is honestly the most important interior wall on that floor. For sure load bearing. It would need a substantial header and load points on each side. You are probably looking at from the outside wall to the corner of the bathroom with part of bathroom wall needing to be redone and possibly a pole in the basement (if there is one).

Not the answer you're looking for? Browse other questions tagged ceiling joists remodeling load or ask your own question.

2
Can I knock down this wall without the whole place collapsing?
1
Need to find out if this is a load bearing wall on my second floor
7
Increase size of ceiling joist compromise roof strength?
1
Interior wall construction - Is it possible for this to be load bearing?
1
Contractor cut joists short (followup to earlier question)
3
Is it OK to drill/notch an end joist (not rim/band joist) as long as it's continuously supported by a foundation wall?
0
How to prevent sagging ceilings when joists are spaced 24"
1
Joist not sitting on brick wall