Can a 12 gauge wire be clamped onto a light switch using the side screw?

I was simply replacing a existing dimmer switch for my kitchen lights with a newly bought Feit electric smart 3 way dimmer switch. After studying, I have located where the dimmer switch should be replaced, the load side, as written on the instructions it came with (rather than the line side).

After rereading the instructions, I finally understood what I missed because the problem was the new dimmer would work only if the switch on the other side was turned on. It was that I did not connect the line wire (common wire) with the traveler wire as instructed by the instructions. I simply didn’t think I had to modify the configuration on the other switch. (I thought well the original dimmer switch was working, so if I wanted to make it a smart dimmer, all I had to do was replace the dimmer with the new one.).

Anyway it all works perfectly now, meaning the lights can be turned on or off on either the dimmer side, or the switch side.

My question is, in order for my switch to work, I had to clamp the traveler wire to the switch using the side screw as the line wire was already plugged into the back and there was no second hole. And because both wires are 12 gauge, I couldn’t jam them both into the hole in the back. So all I could do was leave the line wire plugged into the back and I clamped the traveler wire to the side and screwed it in. Is this safe? 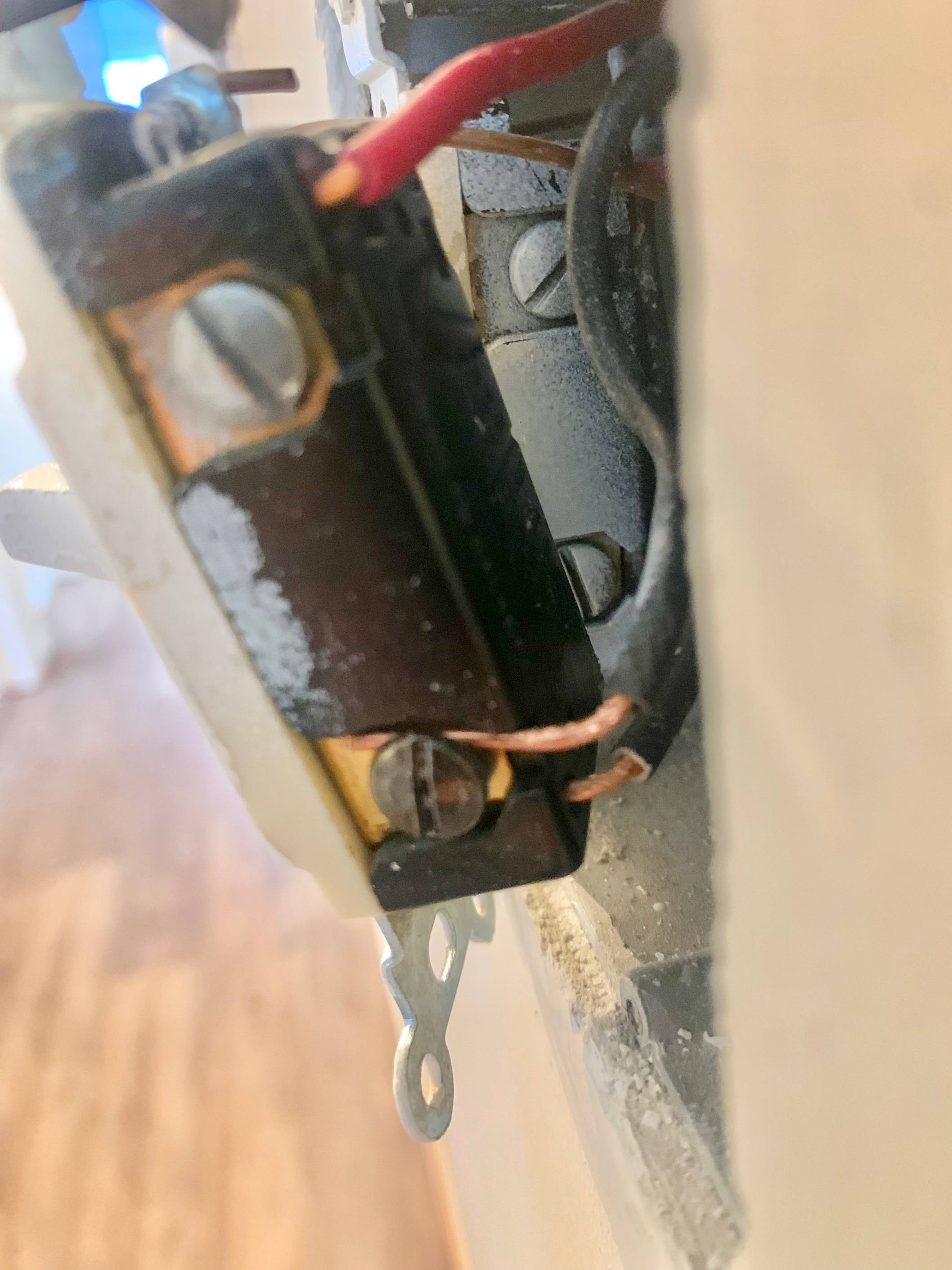 UPDATE: Thank you for all your help. I ended up taking all of your advice and fixed the switch! I found that the previous person who owned this house, or the previous electrician just did some questionable things after learning from you all! Here's the final image: 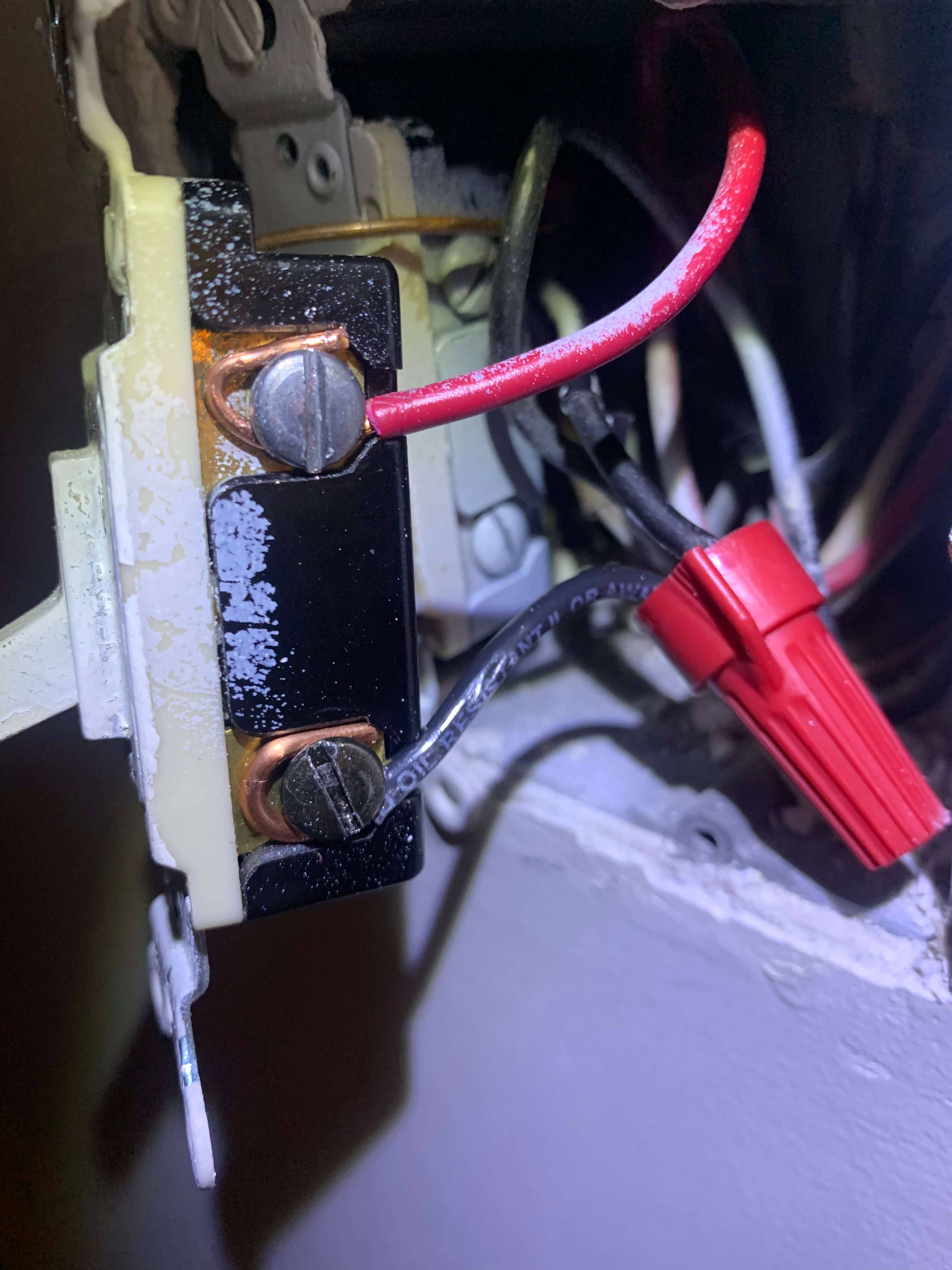 Using the hole(s) in the back is called a "back stab", and, while technically code-legal, they're frowned upon because they can come loose and cause arcing and, if left alone long enough, fires.

The side screws are actually the preferred method and are applicable for either 12 or 14 gauge wire. However, the way you've done it is missing on 2 points:

Should you choose to remove the other black wire from the back stab, the logical thing would be to put both of them under the screw. However, you MUST NOT do this, as the screw isn't designed to hold two wires. Instead, you would put both of these wires and a third wire (about 6" long and stripped at both ends) into a wire nut (make sure you have one designed for three 12 gauge wires), then bend your shepherd's crook at the other end of the third wire and screw it under the screw. This is called a "pig tail" and is the ideal way to have this wired.

One additional note: Some outlets, and I presume switches, (usually marketed as "commercial grade" or similar) have what are called "side clamps". With these devices, you can put two wires under one screw! You strip the wire, do not bend it, and stick it between a fixed plate and a moveable plate under the screw. The moveable plate has small bends in it for the wires to fit into. Then you simply tighten the screw down to the manufacturer recommended torque setting. Because the screw doesn't actually touch the wire, you can have a wire on either/both sides of the screw and you'll get the same tight fit.

IMHO, it is well worth the extra dollar or so to invest in these for any expansion/replacement work as this clamp system makes life much easier - you get the speed and convenience of the "back stab" with the safety of the screw.

If someone is a novice to doing electrical work, I won't recommend a method which is unreliable, like backstabs. There will be enough "learning moments" already, you don't need to learn that too!

Yes it can and it is the best way to do it. Those holes in the back are commonly called backstabs and have a long history of failing. After you turn off the power, you can remove those wires by sticking a small screwdriver into the slot next to each hole and pulling the wire. You can also hold the wire and twist the switch back and forth while pulling the wire.

Shepherd hook the red wire and hook it around the screw clockwise and tighten. Pigtail the two black wires with a 6" extra piece of wire with a red wire nut. Hook the other end of the extra wire around the remaining screw.

Not the answer you're looking for? Browse other questions tagged electrical wiring dimmer-switch smart-switch backstab or ask your own question.

212
What is the purpose of these holes on my wire stripper?
2
Torque for receptacles and light switches

2
Help with wiring new dimmer switches
3
Why does my LED light flicker when turning it on using a dimmer switch?
0
Upgrading to smart light switches but have only one neutral wire in the box
1
Extra Wire in Light Switch Box?
2
Replacing 3-way Dimmer with Smart Dimmer
1
Why is my new Legrand Radiant smart dimmer switch not dimming?
1
Wiring issue with 3-way switches and FEIT smart dimmer and T1/T2 lines cross-talk
0
Gosund Smart Dimmer Switch Not Turning on Light
1
3-Way Wiring Help