How do I keep a GFCI outlet with tight clearance from shorting inside a steel electrical box?

I was replacing outlets and faceplates in my kitchen, finding mostly original electrical boxes or blue old-work boxes, and everything was going fine until I tested a double-gang GFCI outlet and outlet + USB box and saw a lovely purple flash before the breaker tripped.

That's when I realized that this box is actually steel and not gray plastic, and because of the very little clearance, along with a guilty little metal flange, the hot terminal shorted to the grounded box when I tried to reset (turn on) the GFCI outlet. 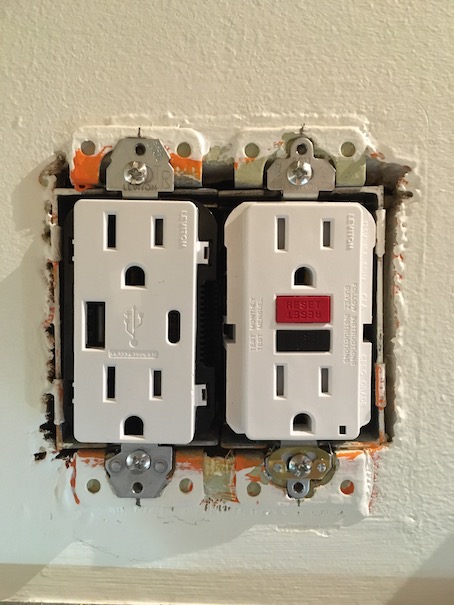 As you can see from the pictures, there is very little clearance here, but I thought these dual-gang boxes and these GFCI and USB outlets were standard sizes. It occurred to me that perhaps there are plastic inserts available for these steel boxes, but I can't seem to find anything like that. I did find some "low voltage" separators for plastic boxes at the store, but they're too thick. I could easily put some thinner sheet of plastic along the inside edge, but that probably wouldn't be up to code. Nor, I suppose, would be placing electrical tape over the flange and over the outlet side terminals.

This is the flange where a little bit of it or the GFCI side terminal or both vaporized: 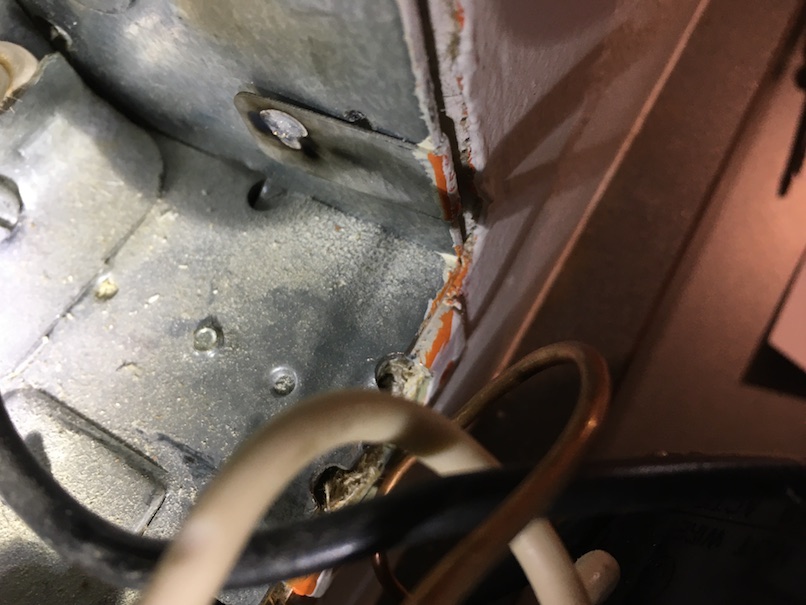 And this is the GFCI side terminal, showing some discoloration on the lower terminal: 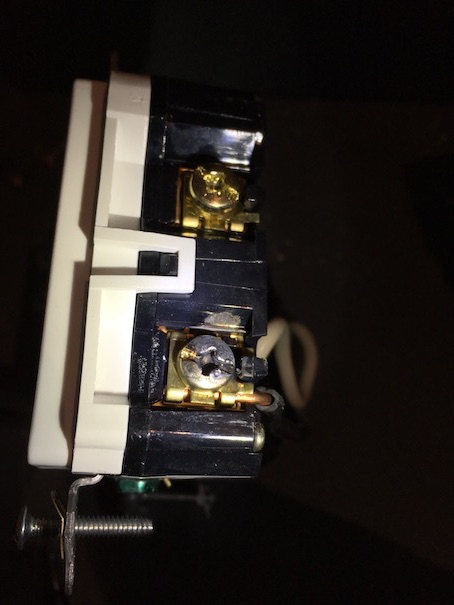 This is beside the point, but I connected the USB outlet as a load of the GFCI outlet, and to the best of my knowledge I wired everything properly. Amusingly, the GFCI and the USB outlet are likely still fully functional, but thank God for circuit breakers.

I doubt that I'm the first person who has run into this situation. Was there some way I could have avoided the short without prior experience? (And what is that little flange anyway? There are two on each side of the box, but the other three are flush against the side.) But most importantly, what is the correct way to resolve this without replacing the steel box with a plastic one? These specific outlets are the ones that I wanted to use, but if I am forced to use smaller things that cannot short out, I will have to go that route.

As requested by @J... I am including pictures of the receptacles from the back. The lighting isn't the best, but if you zoom in on the GCFI outlet on the left, you can see the LINE/LIGNE lettering on the top and the LOAD/CHARGE lettering under the sticker residue on the bottom, so I am quite confident that I wired this correctly. The LOAD from the GFCI outlet is wired to the USB outlet. I of course had to disconnect the LINE/LIGNE wires when I removed the receptacles from the box. 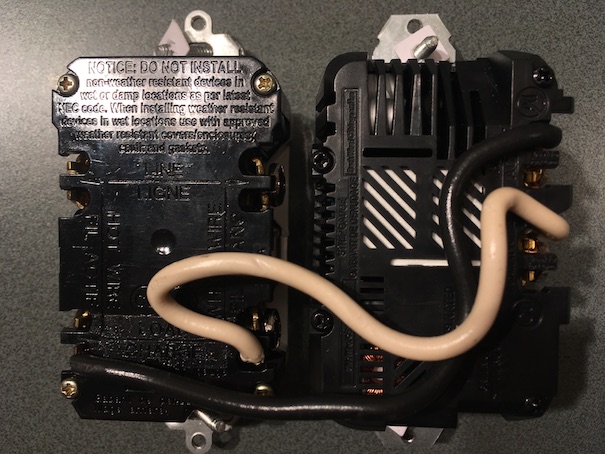 And from the sides: 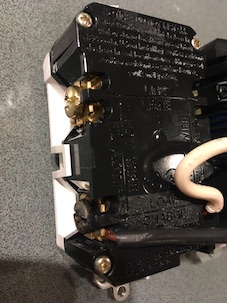 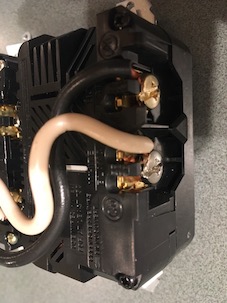 Because the metal flange was touching the LOAD terminal, it makes sense that this only shorted when I tried to reset the GFCI outlet, and apparently the circuit breaker trips faster than the GFCI outlet can react.

So those metal cut-in boxes are really designed to be gangable switch boxes, but there's nothing wrong with using them as long as you don't violate wire fill allowances. They are a design from an older time when electrical devices were much smaller. They are not up to standard sizes of today and are inadequate for modern devices containing electronics.

As for protection from ground faults, we as electricians wrap receptacles and switches with black tape all the time in metal boxes. Nothing in the Code prohibiting it and is a good idea to do.

From the added information in the comments, this 2-gang box is only 3-5/8" wide which is insufficient for the two modern outlets which are installed in the photo. Standard device boxes are 2" wide and this leaves plenty of room for a clean installation without resorting to hacks like tape.

This old device box would be grandfathered and code compliant only as long as it contained its original devices. Once you open up the device box and make modifications it must be compliant to modern code standards when you are done. The best option here is to replace the device box with a larger, standard sized box. In your case it should be pretty easy - those four metal tabs just fold out and the box should slide out. You may need to open the hole a bit wider to fit a new old-work box, but ideally you probably shouldn't need to even patch or paint.

Why bother using boxes at all? Reasons. When you get down to the reasons we use junction boxes, metal is better at every single one of them. All that to say, don't let this deter you or make you think metal is worse somehow. It's better - a lot better.

There is nothing wrong with an outer wrap of tape around the sides of a socket. Note that good tape is somewhat stretchy, and go ahead and wrap it with some tension so it'll conform. Finish in a straightaway so it'll stay down flat.

I do it whenever it's useful, and I'm not going to stop anytime soon.

That said: GFCIs and other "fat" outlets are a murderously tight fit inside standard steel boxes, particularly 4x4 metal boxes and their derivatives (yours is not a 4x4). When able (either surface-mount or drywall-off new work), I recommend using a 4-11/16" square box and appropriate mud ring or domed cover. That will provide ample "elbow room" to avoid this problem.

Grounds in metal boxes. Remember that in metal boxes, you MUST run all the incoming ground wires to the metal box FIRST. At that point you can simply mash all the ground wires into the back of the box and forget all about them, if any of these things are true:

Only if none of those are true do you need a ground wire (el cheapo outlet floating on drywall ears).

* Domed cover must have crushed corners so it has hard flush metal-metal contact with box frame.

Replace the box with a newer box that has a little more clearance. You might need to shave away some drywall but who cares that's easy enough. Electrical tape is for hacks and adding an insulator on the side isn't ideal, you don't want anything in there extra that you don't have to

6
Techniques to wrap the innards of electrical switches and outlets with electrical tape?

4
How to add GFCI to a box with one outlet controlled by a switch?
1
How to wire GFCI outlet
0
Upgrade from outlet/switch combo to GFCI + outlet
1
Will GFCI outlet protect downstream outlets with ground connected to neutral?
0
Replacing GFCI outlet inside 2-gang box
0
New GFCI outlet won't reset after tripping when load wires are connected
0
How can I switch my standard outlet to a GFCI?
0
GFCI not working. Other receptacles do
3
Horizontal Electrical Outlet - How to Rough?