How can I temporarily set this porch post until after the winter?

We have this post that is now loose. I wanted to set it back in place and stabilize it (using construction adhesive), so I took it out completely to clean up the ends, and this is when I realized that it could not be put back because it had started to rot. 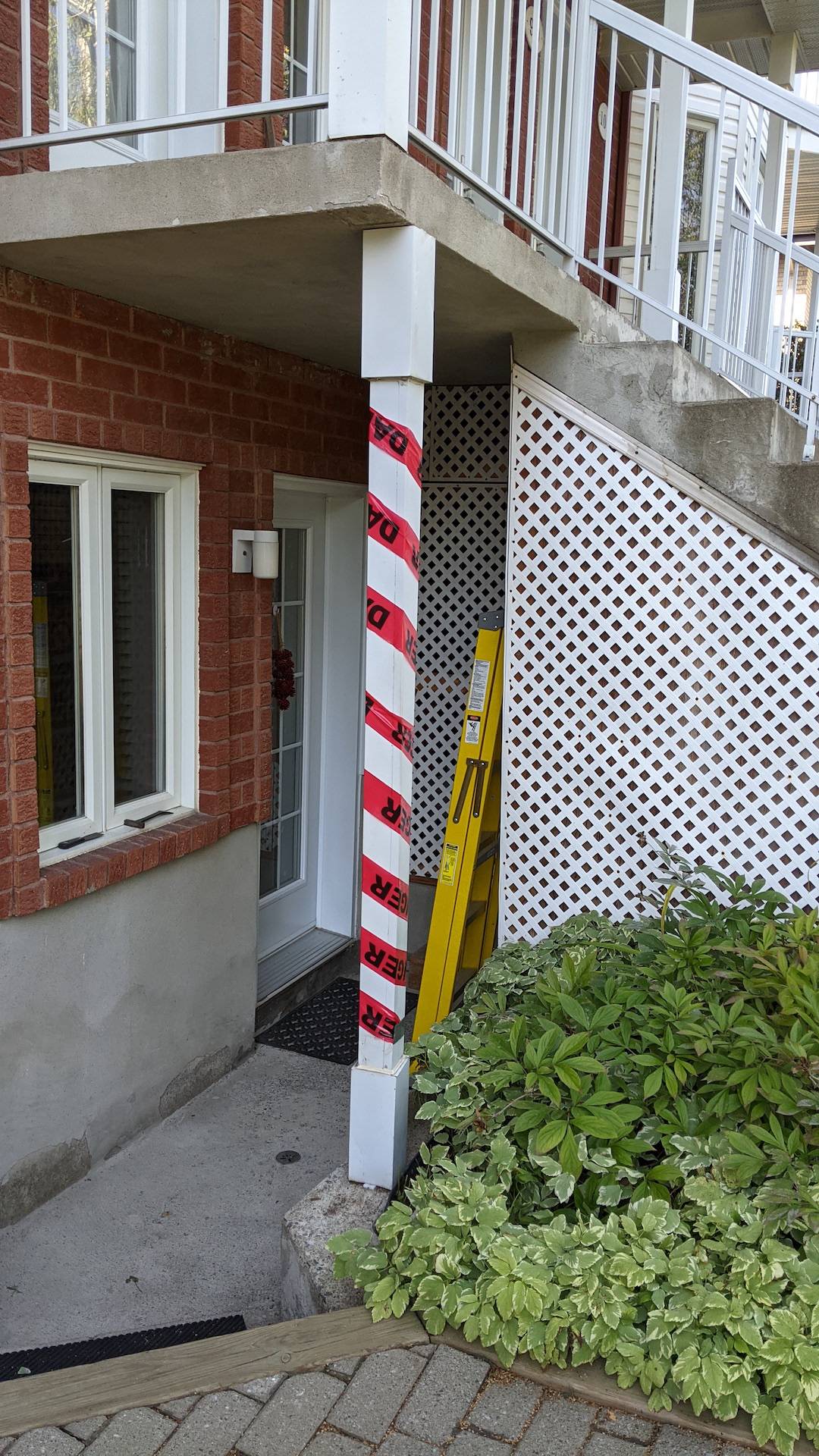 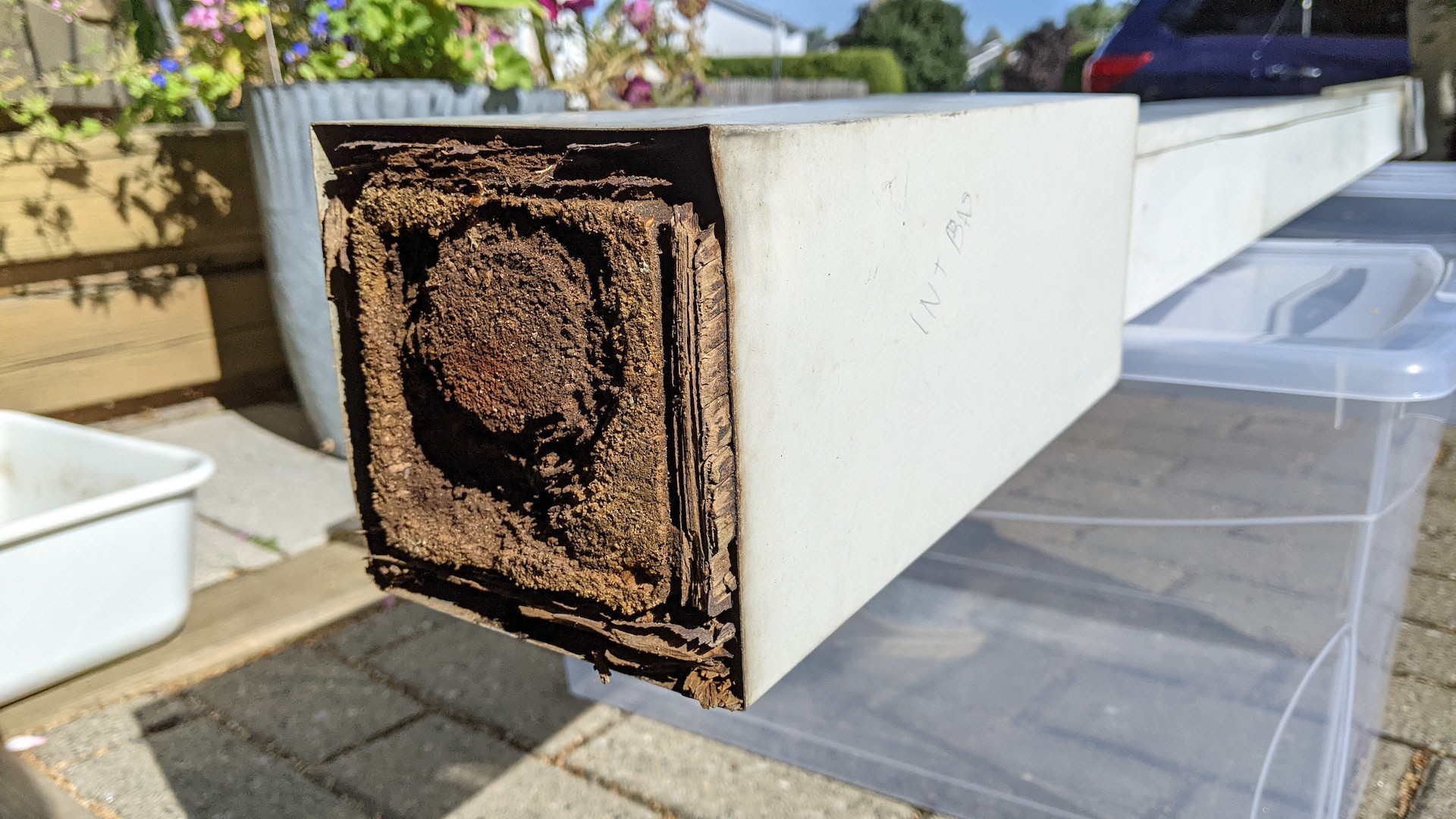 Now the plan is to change all of our posts, but being in this part of Canada, contractors don't work all year round and so we'll need to wait until next year, after the winter.

So I need to set it temporarily until next year; it needs to be stable enough so that the elderly folks living there could use it as a help to climb up and down the stairs, while not screwing up with the project of removing it next year.

How it was before

Apparently, the post was only forced into place between the top concrete porch floor and the bottom concrete wall, held at the top with caulking. (I'm surprised it has lasted so long!)

How it is set now

I've used plastic wedges (I think those are typically used to stabilize plumbing equipment like toilets) at the top and at the bottom, the post appears to be stuck there now.

What I think could be a solution to this issue

Since I need to set it temporarily, I thought about using the solution I've put in place now using wedges, plus using a "removable sealant", like the one I use on my windows during the winter. The logic being that the caulking that was there before held up for 20+ years, this temporary caulking could hold up for at least a year.

What should I do to set it until next spring/summer?

This needs to be taken seriously especially since people use it as a support. That post could be transferring load from the upper floors down to the concrete footer so it should be really secure. Since the post is rotting, I don't think you should trust it.

For a temporary fix, I'd suggest a ceiling jack similar to the one pictures below. You can get them at most home stores. Once in place, you can secure it with a few concrete screws.

We had a condo collapse down here in South Florida so I might be overly cautious. 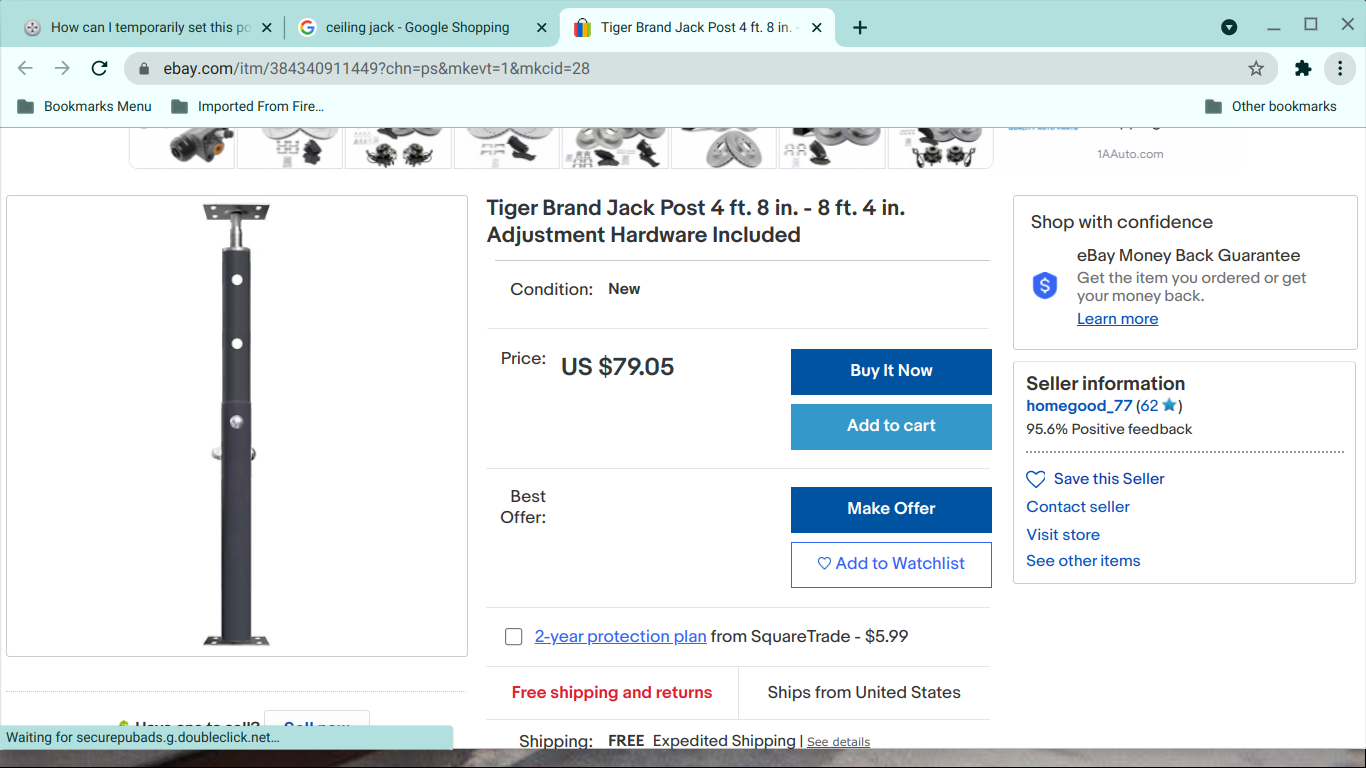 First to make clear that the post wasn't glued to the slab, the sealant/caulk was meant to protect the post from the intrusion of water/moisture. As you have noted, the post may not be the main support, since the slab seems comfortably sitting on the wall and the stairs (depends on how it was built). However, it could be a necessity for safety shall the supports start to deteriorate.

Albeit the post base is rust packed, if not disturbed by the forced removal of the rust, it still has a lot of strength. Shimming is a fine approach, but you can go further to ensure it stays a longer period. I would jack the slab up a little, form around the base, and grout with high strength grout, or if the gap permits, you can insert a cement tile. The speed of rust forming will slow down once the gap is filled with grout, or the base is sealed around to isolate the influence of air and water (both are ingredients of rust action).

Note, from the photo, looks like you have a steel post wrapped in a sheet metal shell. If that's is the case, you can drill hole(s) on the shell to facilitate the grouting (send grout through the hole).

Not the answer you're looking for? Browse other questions tagged post porch or ask your own question.

7
How do I replace a wooden fence post that was set in concrete?
2
How should I install the post for a mailbox?
3
How should I repair rotten load-bearing porch posts?
3
Can I set a 2 3/8 metal post into a 4x4 hole?
0
How can I prevent decay in a deck post resting on the house footing?
1
Porch roof support question
1
How can I insulate my porch floor?
3
When setting fence posts, does the post need to go to bottom of the concrete?
7
How can I repair a snapped 4x4 mailbox post without digging out the footing?
1
Help replacing a rotted roof overhang support post