How do I repair or fix crumbling plaster behind a light fixture?

Around the ceiling rose I spotted some crumbling plaster. I would like to make it good again once I remove the old light fitting. I am not sure what order to do things in. Ideally I want to put up a new ceiling light and paint the ceiling after removing all the traces of the old wallpaper. 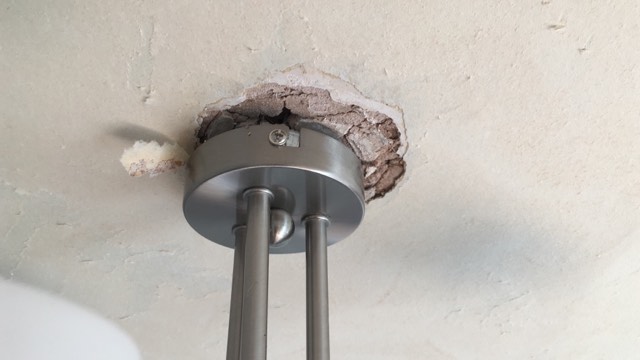 You'll want to remove any crumbling plaster. There's probably lath strips up there so just mix up some plaster and fill in the area. Any gouges in the ceiling can be filled in with plaster. I'd be against using any type of glue mixture to stabilize crumbling plaster. You wouldn't then be able to sand it smooth and paint probably wouldn't stick to it. That's not a good fix for a ceiling.

I generally agree with JACK, but you could skim with a setting-type joint compound to add some stability and it might hold, especially if you embed fiberglass tape. Maybe do that first if you really don't want to cut it out. Try to press the compound into the cracks well and it'll probably be ok if you're gentle with the fixture.

Of course you could add a larger plastic rose behind the fixture's. You can probably find a modern one to complement your fixture. Put it up with project adhesive to bond it well.

TL:DR - don't faff about with real plaster for such a small repair… plaster is great for large open surfaces, but rubbish for patching tiny cracks. It's neither sticky enough nor penetrative enough.

That doesn't look like the world's oldest plaster, but you don't really know whether that's just an isolated patch or the rest is just held up by the the top skim.

Unless you're planning on re-plastering the whole lot & so long as you don't expect it to hold up that light fitting [which you should find a joist to fasten to] then sure, PVA is a pretty good semi-permanent strengthener.
It's much harder to deal with it on ceilings compared to walls, so you need to prepare for some spillage & dripping until you can get a good penetration & time to set, but it will work to an extent. Use too much, too thin & catch the drips/spills, for maximum penetration. Leave each 'coat' to dry before going again, rather than trying to get it all to stick solid in one go.

Once done, give the top a light skim with 'Polyfilla' or similar. DIY plaster patching in a tube, with flexible plasticisers to make it very sticky & resilient. Soaked-in PVA & filler will both take paint well.

I live in an old Victorian pile with plaster which has aged to little more than hairy dust these days. There's no way I'm going to re-plaster the lot, so I've injected much of it with thinned PVA & can report that the result is considerably more stable, sufficient that I can now drill through it into the brickwork behind without it feeling like I'm drilling dry sand.

Injection for small areas can be done with a blunt syringe - these days you can get them from shops that sell 'vape' accoutrements as well as chemist/pharmacists. The size of the syringe & blunt needle will dictate how thin the PVA needs to be.

One last note.
If it's just a bit cracked rather than completely decaying to dust, use 'No More Nails' or similar high-grip/rapid dry adhesive instead. You can fill like plaster, just injecting the cracks until you can tell you've pushed adhesive right through. Result is stronger than plaster or PVA/plaster, but it doesn't penetrate. Again, skim with Polyfilla afterwards.

Not the answer you're looking for? Browse other questions tagged electrical repair walls ceiling plaster or ask your own question.

7
How can I tell if I have rock or wood lath plaster, and is there a difference when repairing cracks and peeling/flaking?
4
How do I repair crumbling wall plaster?
3
How do I patch a 3'x3' hole in a ceiling made up of plaster, lath, and metal mesh?
2
Should I remove moulding before adding a plaster ceiling?
0
Trying to rehab tired plaster ceiling need help please
4
How should I fill channels left in old plaster after dado rail removal?
11
Re-do paint over plaster in bathroom: How to feather/match?