Thoughts on building a brace for a heavy chandelier?

I need to build a brace to support this light fixture in my dining room. 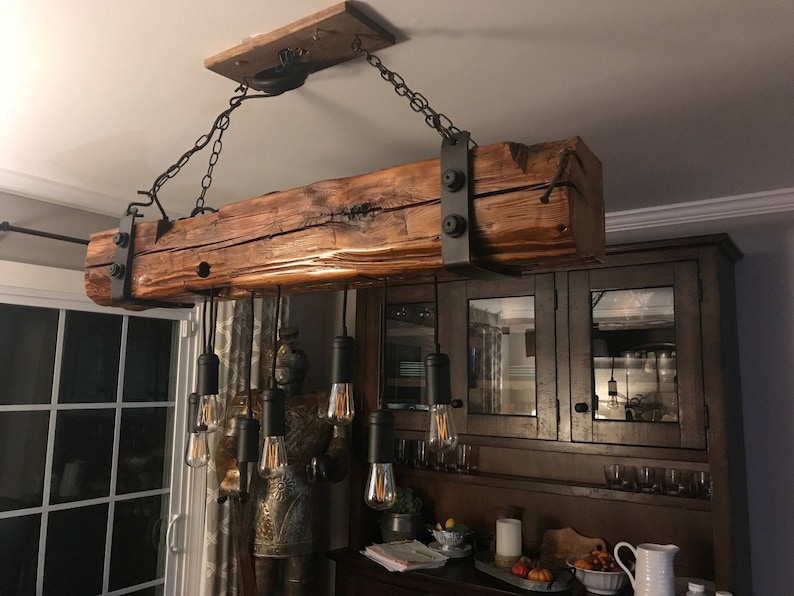 The eyelet screws on either end should be attached to the existing ceiling joists. However, mine run opposite the direction that I need them to. My plan is to cut 2x8 supports and fasten them between the joists, then attach the eyelet screws into the new supports.

I am considering running a length of metal rod through the new supports so that I can hold it more firmly in place using washers and nuts on either end. Overkill? Would this add any structural benefit or just wishful thinking?

Do I need to leave a gap at the top of the supports for airflow? I am concerned about trapping heat from the electrical box in the cavity that I'll be creating. If a gap is needed, how much space should I leave at the top?

Any other concerns for mounting a very heavy lighting fixture? 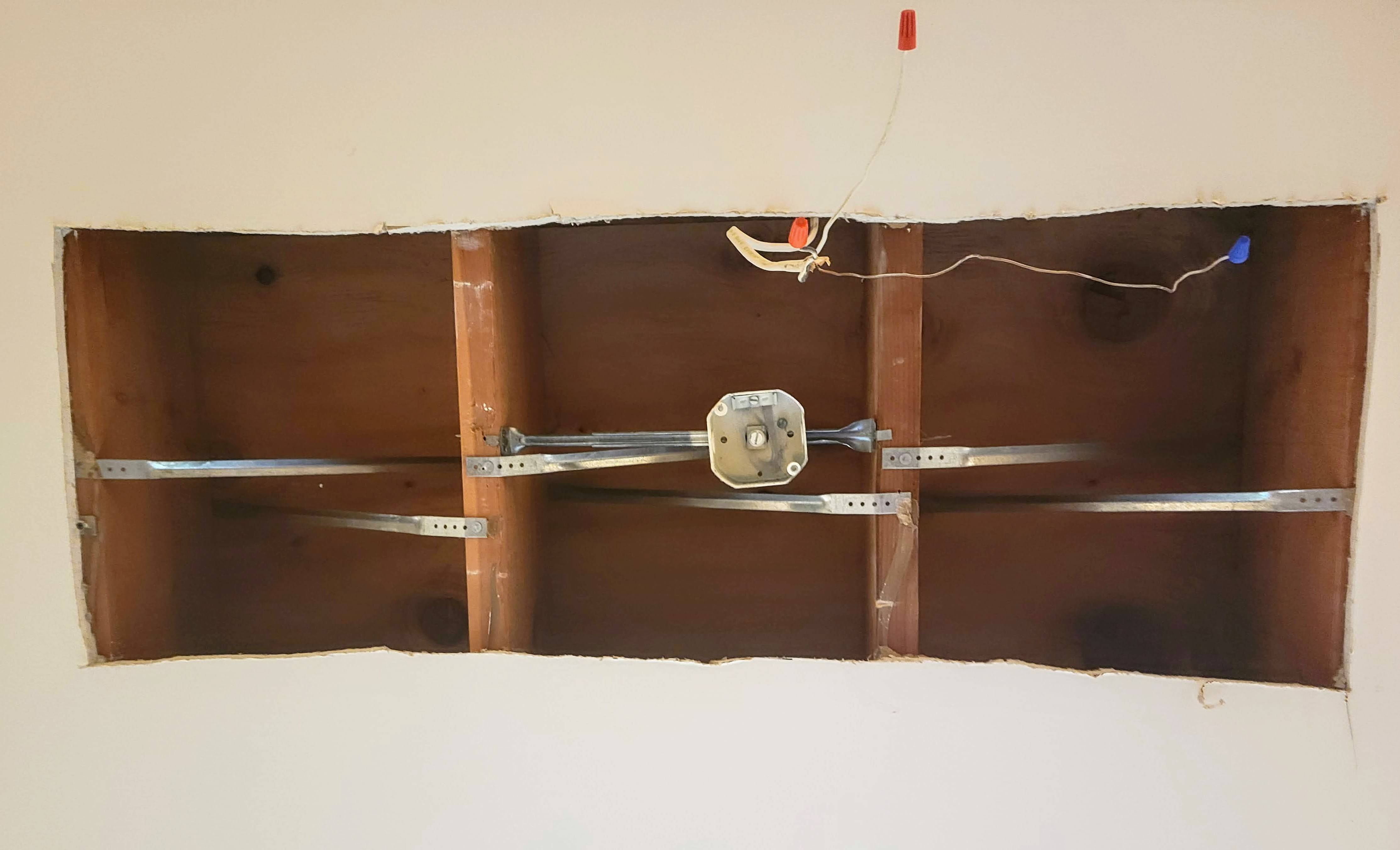 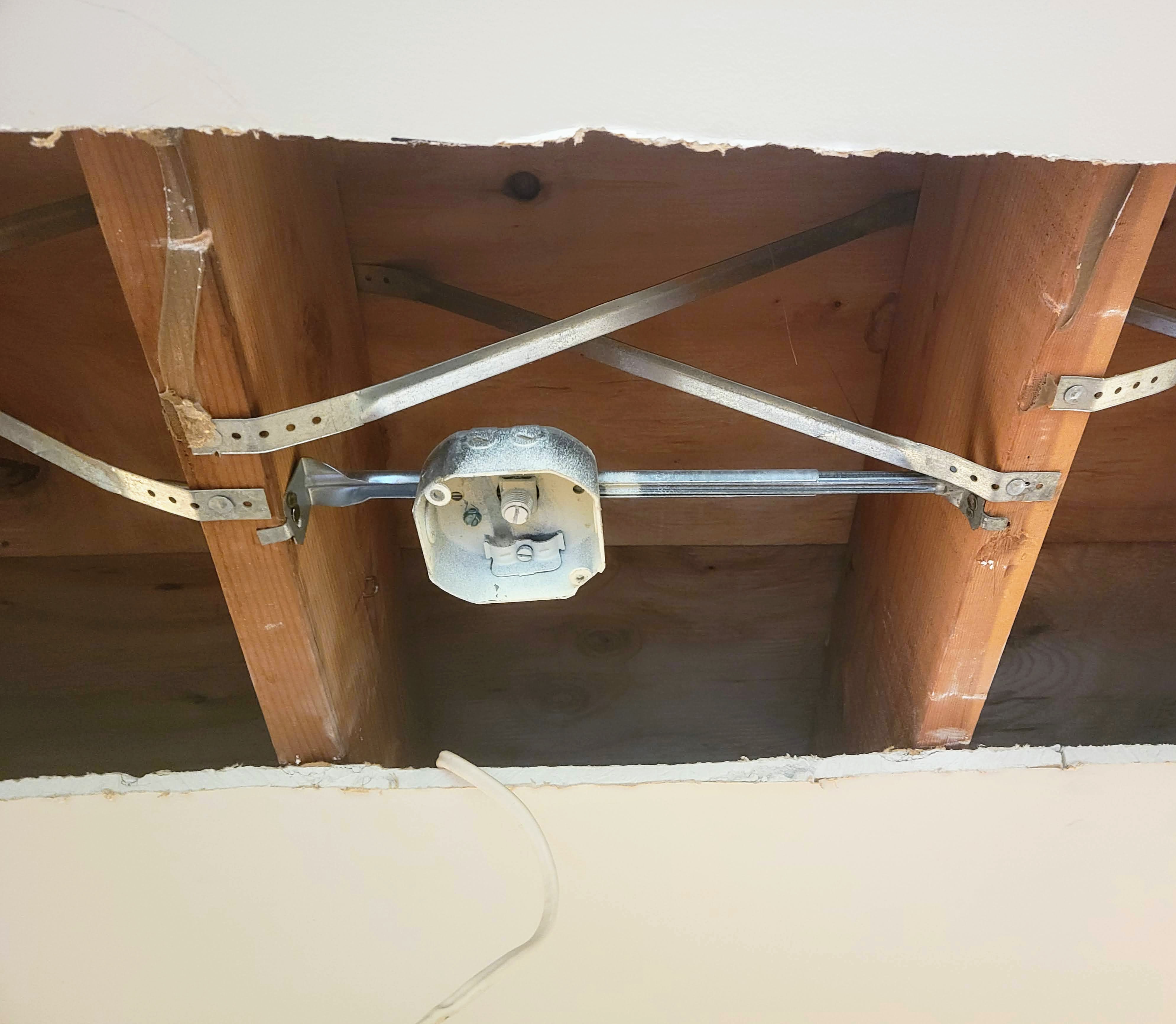 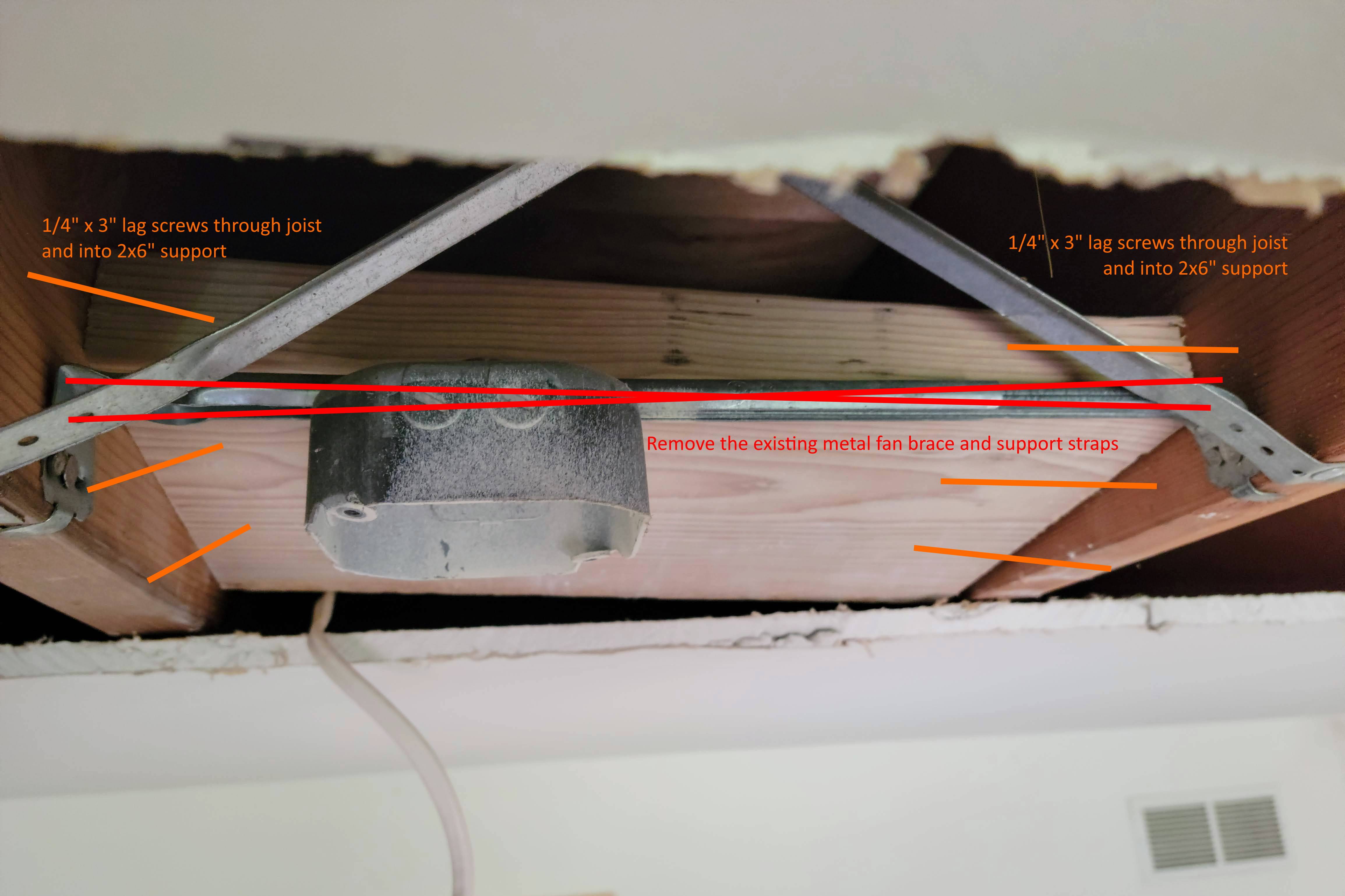 You could attach blocking to the joists on both sides of the existing electrical box and bracing, etc. 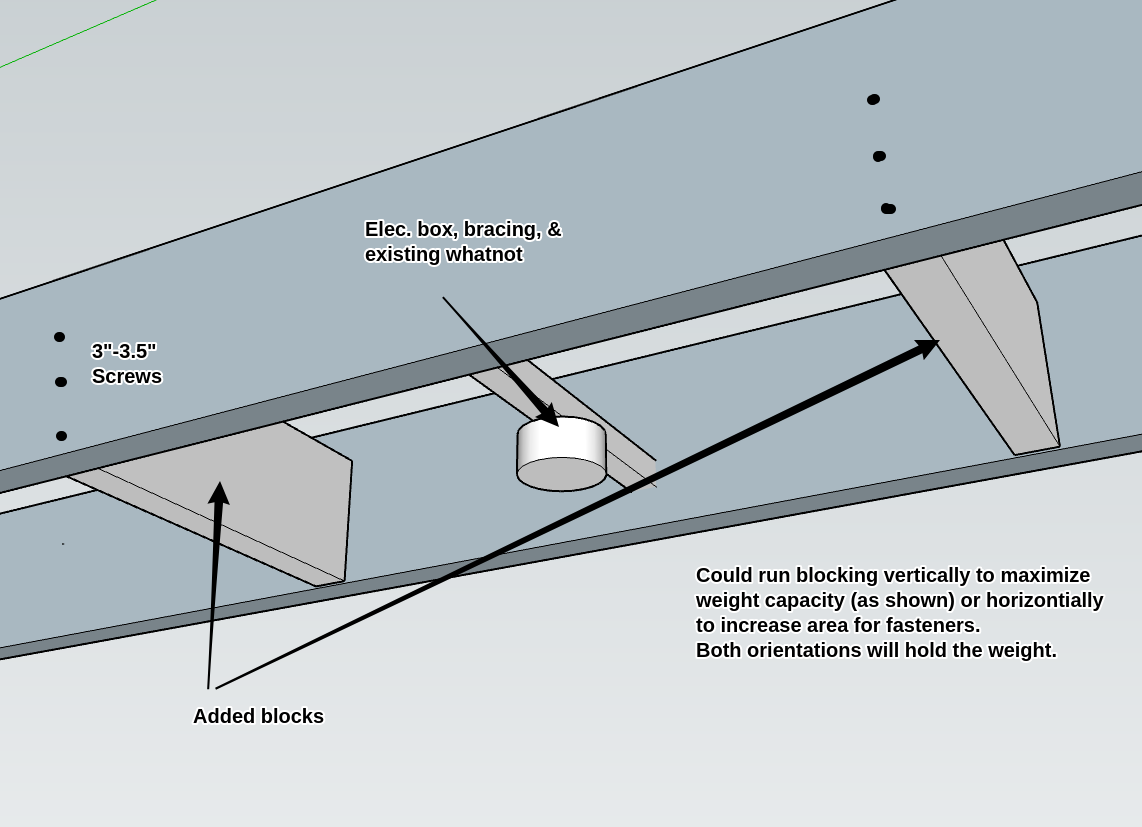 Attach the "base plate" of the lighting fixture through the drywall to the blocking. You can use "old fashioned" looking lag screws to attach the block. These are available at BigBox, etc. and will match the ironwork on the fixture. 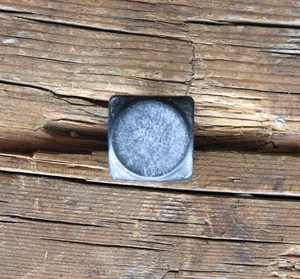 Update after seeing the fixture image:

There's no need to bolt the box to the support framing other than to secure it in position. Nothing hangs from the box (so it doesn't even need to be fan-rated). I would still run the 2x10 over the box, and I'd add blocking on each side of the box to bring it down flush with the adjacent joists. This will give you solid backing for the fixture board and/or the eye screws.

A 2x10 spanning just ~15" will carry that load without breaking a sweat. It's all a matter of good fastening.

I would run a 2x6 or larger, laid flat, over the box. Secure it with at least three 3" gold construction screws or two 1/4"x3" lag screws at each end. Bolt the box to it. (If the box you have now isn't fan-rated, upgrade it. You need the mounting screw holes for the fixture to be robust enough for the job.)

Heat escaping electrical boxes isn't generally a concern. If it was, all boxes would be required to have clearance or insulation. If enough heat is being generated to cause a safety issue, something's badly wrong with the wiring.

Unsolicited protip: Next time you cut a hole in drywall for repairs, leave an inch or two extending past the adjacent framing. This way you can float backing for the patch without having to fasten it to the existing framing. It's much quicker and doesn't require careful positioning.

Engineering point of interest: The chains on that fixture hold approximately twice the weight you might think. This is because of their angles. Whereas a vertical chain would hole more or less half the weight of the fixture, they now hold roughly the entire weight of it... each. Load force increases exponentially as the angle strays from vertical. If you're selecting chain yourself, be sure that it's up to the task.

This is what I would do personally: 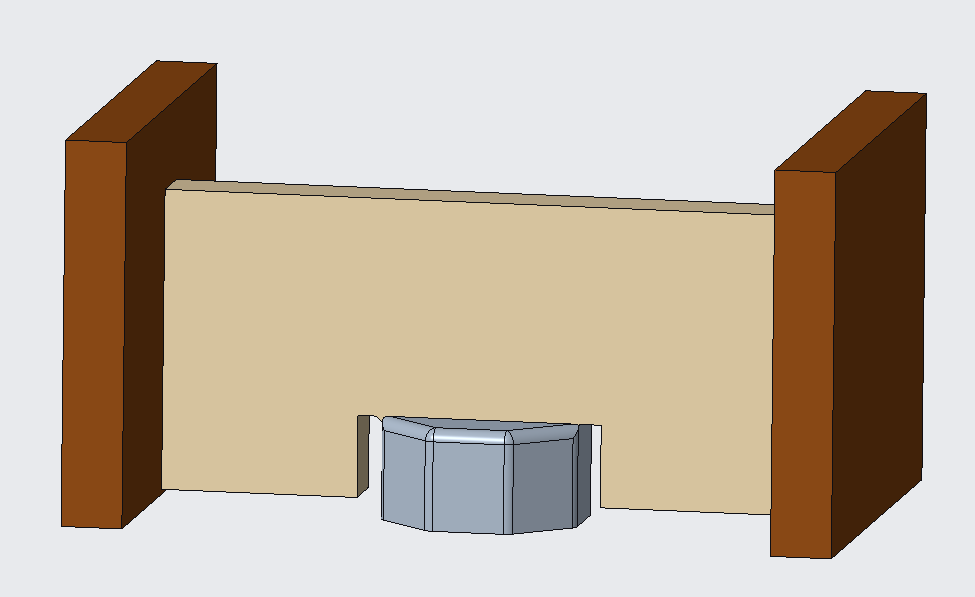 I would get a 2x8 or larger, cut it to fit the width, cut a notch to fit the box, the fasten that between the joists. Make sure you cut the width of that to fit as snugly as possible without having to excessively force it in, gentle tapping with your fist is ideal. Put 3 or so screws such as these DeckMate screws on each side. The resulting structure will be sufficiently rigid that the joists will come down before the light support does. Secure the upper board with the eyelets to this 2x8 with similar screws with the right aesthetics, such as these low profile screws. Secure the box with the same screws you use to secure the support.

The notching of the bottom of this support is a non-issue, even a 2x4 spanning the joists would be enough to support the light fixture. A notched 2x6 is going to have plenty of leftover rigidity, 2x8 or larger just increases the already-plenty safety factor.

Definitely use a fan rated box, as maybe 20 years in the future you'll want a new aesthetic and might put a fan in or something else that needs to be supported entirely by the box.

Edit: if you are mounting the base plate parallel to the joists, then just do this with two 2x6s in the right position to place the screws through the baseplate in attractive locations, and forget about the notching. Again, even a pair of 2x4s is more than enough for the task.

If mounting perpendicular to the joists, and the position of the eyelets are such that they are outside the joist space where the box is, then it would make sense to do the above, with a support on each side of the box's space.

I suggest running a 2x header between the joist and level with the junction box. Then hanging the fixture on the eyebolts that fastened on the 2x. It will be much sturdy. 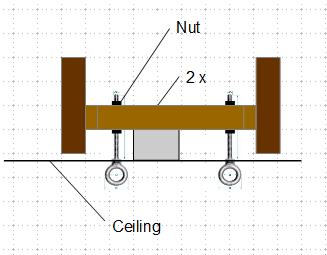 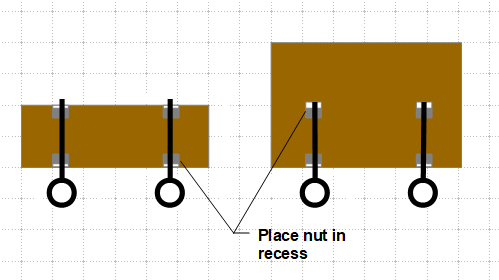 1
Can my floor support Kitchen Island?
1
Need a way to rotate a chandelier *without* rotating its mounting point
6
Can I cut a hole in a 2" x 8" joist that is less than 1/3 the height of the joist, leaves at least 2" above and below the hole, but is 10" wide?
0
How to properly double on ceiling joists
4
Do I need blocking between 2x8 joists with an 8-foot span in a kid's fort?
0
Can a vapor barrier follow the profile of floor joists?
2
Short joist not continuing through kitchen soffit foiling remodel plans
1
Joist pulling away from center beam
4
How to repair this split ceiling joist?