How did a circuit that was shut off at the breaker almost kill me?

I verified that the circuit was off using two methods:

I started with the smoke detector I'd used the voltage detector on. I unplugged the old smoke detector and checked to make sure the new smoke detector fit. I discovered that the new detector wouldn't fit because it has a bulge that would need to stick up into the junction box, but there was no way to make it fit because the wires in the box were so long (roughly 8 inches from the ceiling + wire nuts and another 2 inches to the AC connector) that they filled up the whole box. I decided to trim the wires back a few inches.

I grabbed my wire tool and cut the red interconnect wire first. Then I did something which in retrospect was very stupid: I cut the hot and neutral wires at the same time, thinking I was safe because the circuit was definitely off.

As soon as the cutter made it through the rubber insulation, it bridged the connection between hot and neutral and EXPLODED. A huge shower of sparks burst from the wires and I fell off the ladder screaming. By some miracle, I escaped unharmed and the sparks didn't set anything on fire.

I'm guessing the only reason I'm not in the hospital or dead right now is because I was on a fiberglass ladder and the wire tool has an insulated rubber handle. You can see here where the arc burned through the metal and lightly singed my finger. 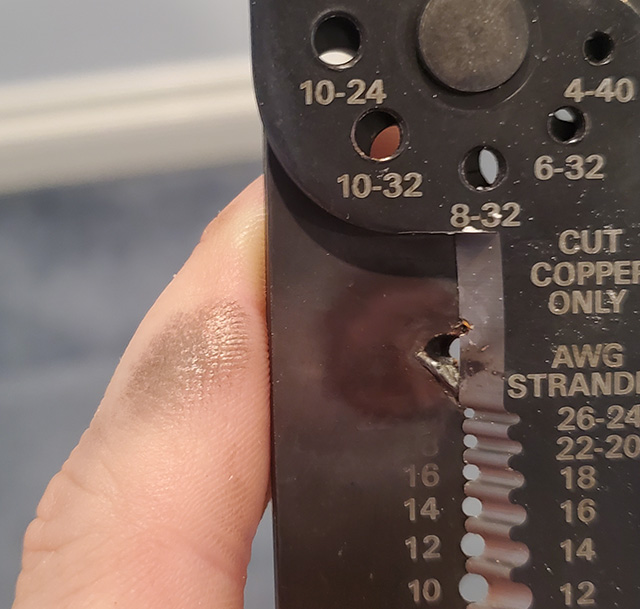 After I recovered, I checked the hot wire with the voltage detector (still no reading), checked the other smoke detectors to make sure they weren't getting power (still no green light), and finally went outside to check the breaker (still off).

Edit: I keep thinking I figured out what circuit these damn things are on and then finding that the wires are still hot. There have been moments where it seemed like the most plausible explanation was that gremlins were switching the smoke detectors to different circuits at random.

I discovered a compounding factor. In the bedrooms with recessed ceiling lights, if the lights are off, my voltage detector doesn't read anything from the smoke detector wiring. If the lights are on, the NCVD detects current all three wires (hot, neutral, and interconnect). That might be the explanation for some of my confusion. However, my multimeter doesn't show any current flowing through the wires even when the lights are on (I double-checked it against a regular outlet to verify it's working), so maybe the NCVD is wrong.

After writing out the question, I realized I had forgotten to check something. I went back to the panel to see if any other breakers besides the dryer circuit had flipped off, and sure enough, the "garage light" breaker had been tripped. After testing more, I determined that the smoke detectors are actually on the "garage light" circuit breaker, not the "dryer" circuit breaker.

So apparently in all of my going back and forth to the panel and testing different breakers, I somehow confused myself on which circuit the smoke detectors were on. False positives from my NCVD may have initially prevented me from realizing when I did have the correct breaker shut off, and definitely caused me further confusion after the initial accident.

Could be an unmarked Multi-Wire Branch Circuit

We often look at people's panels for other reasons, and we often say "hey, see the red+black wires from the same cable, going to 2 independent breakers? Those need a handle-tie. So when you shut one off for maintenance, they both shut off". And people say "thanks" but think "why bother?"

Well, this. This is why.

A Multi-wire branch circuit (MWBC) is where 2 hot wires share the same neutral. (or 3 in 3-phase wiring). This works because they are on different phases -- neutral carries only difference current - if one leg is drawing 16A and the other 15A, neutral carries 1A, not 31A. (use of a handle-tie also helps enforce phase placement).

These don't require common trip for safety, so they don't need to be on a 2-pole (3-pole) circuit breaker. But they should be handle-tied so maintainers are forced to shut off the entire circuit.

The procedure you did - turning off breakers until "hot" current goes away - is normal and common. However, if a MWBC's two hot breakers are not handle-tied, then the other half (2/3) of the circuit is still hot! And there is current flow on neutral! If you short another hot to neutral or ground, kaboom! Or if you interrupt neutral as part of maintenance, you have series arcing when it parts, and the "downline end" of the neutral now has 120V on it. (the downline loads on the other phase are trying to return current there).

So that certainly could have caused what you describe. The cure is to search the panel for "shared neutral" situations (if wired in cable, the sure sign is a red wire on a 120V breaker) and make sure to fit those handle ties!

Regardless, treat everything as live

I treat all wires of all circuits as "live", even neutral. (I don't handle ground much since my world is EMT metal conduit; I get ground the moment it's built). This saved my bacon once.

I had shut off a circuit and started to work on it. I know this circuit like the back of my hand. Also, it's in surface mount conduit, plainly visible, and fed a large fluorescent light that was on. (fluorescent lights are in the greater family of arc-discharge lighting, ranging from Batman's searchlight beacon to neon to those orange street lights). I knew I had the right breaker because the light went off.

I was sure enough that I actually used a screwdriver to flash hot to the metal box. (which I would never do if there was any chance of it being on). I braced for an arc flash, turning my eyes upward/away. I got an arc flash right in the face, but not the one I was expecting.

The fluorescent light turned on, striking its arc in the normal way.

So I did it again. Tiny blue arc on the hot wire, and the fluorescent light turned on.

No. There was no hot-neutral reverse. The breaker was off anyway.

So it turns out, electrical is like a box of chocolates: you never know which one will kill you.

Not the answer you're looking for? Browse other questions tagged electrical wiring electrical-panel circuit-breaker smoke-detectors or ask your own question.

6
What's the signalling voltage on hardwire smoke detectors? Mix and match?
2
Power everywhere after turning off the main circuit breaker
0
How can I verify the integrity of smoke detector interconnect wires?
1
Is it permissible to install a low-voltage fixture over an existing ceiling box?
0
Sprinkler system & smoke detectors - Illinois code requirements when closing loft
3
Lights on same circuit don't work after replacing smoke detector
0
Smoke detector wiring - black wire in 3 wire appears to be damaged. Can I use power from AFCI circuit to power but use red wire to interconnect?
1
Why is there still voltage in my wires when the breaker is off?
1
A spark while installing a smoke alarm