Forgive my ignorance in terminology, I am a computer engineer but not an electrician. The concepts make sense to me, but I don't know all the industry standards and jargon.

I recently had a 240V external outlet installed for an EV. Naturally this needed a GFI. Not coincidentally, my water heater stopped working the day it was installed.

I have before and after pictures of the panel. The water heater was on the 3rd breaker down on the left, the 20A one which is my "2 pole 2-slot" breaker as opposed to the other 2-poles which seem to often take up 4 slots. 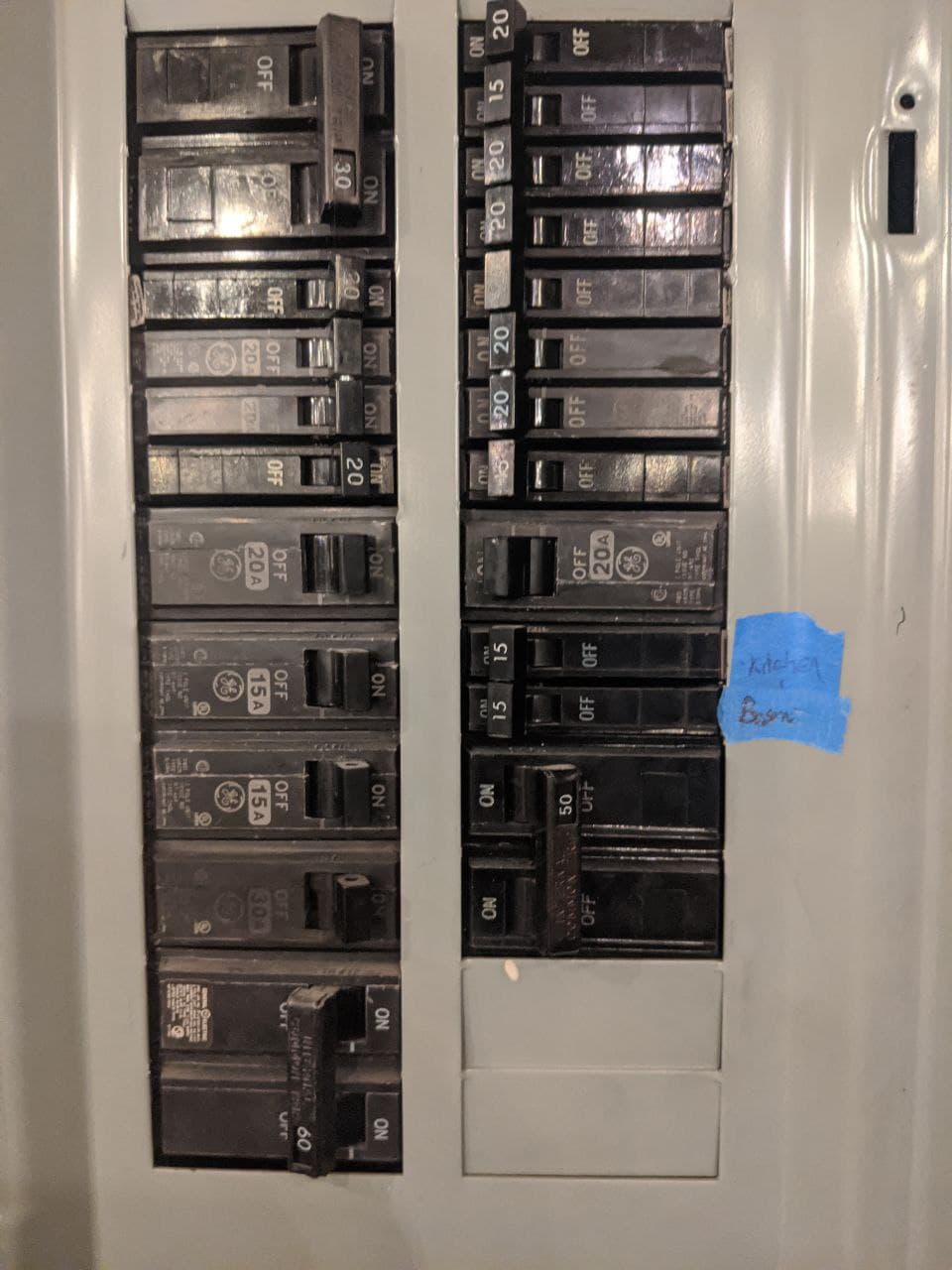 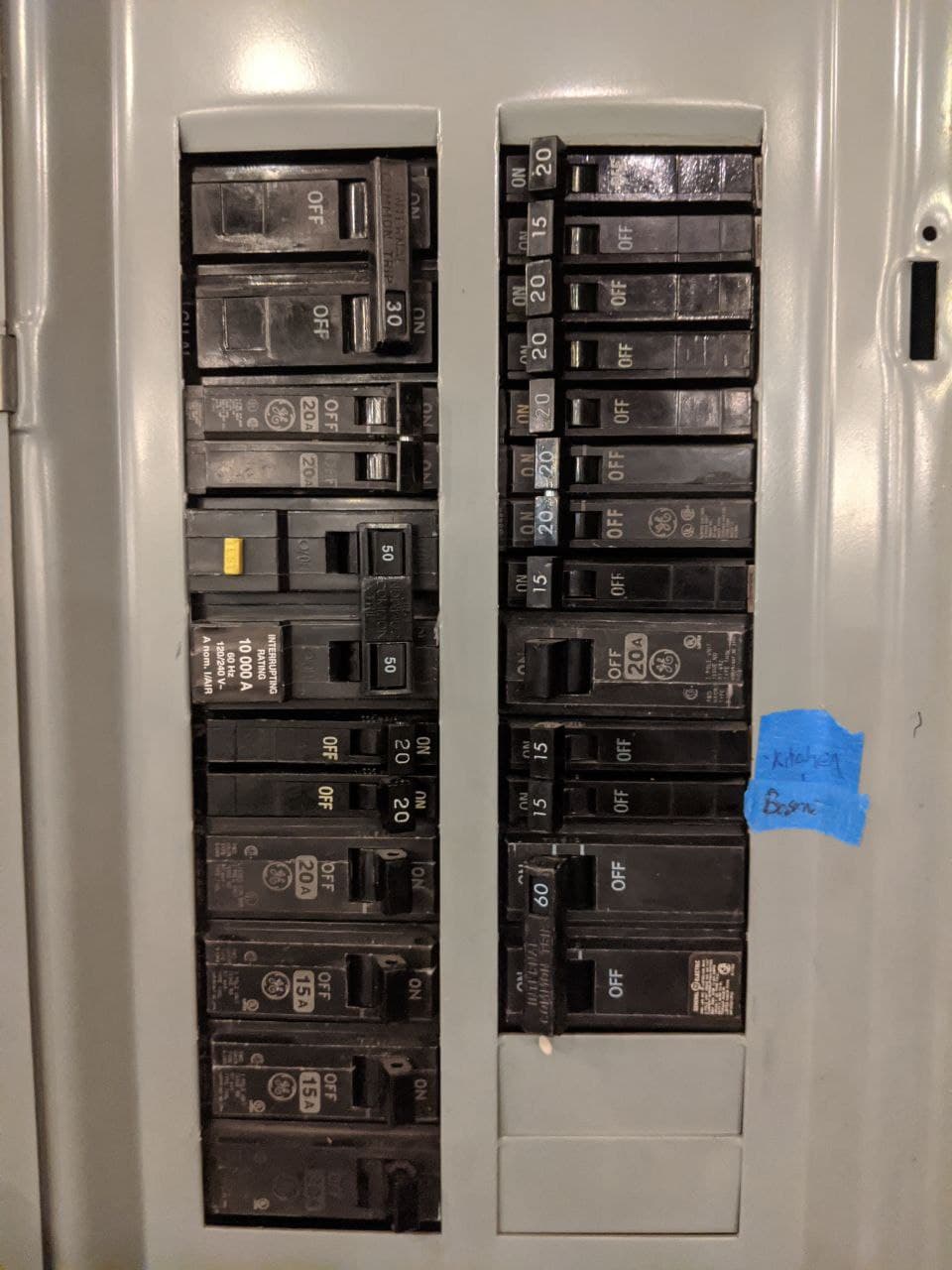 Aha, looks like the breaker was moved up for the GFI. (I opened the panel cover and have confirmed this is indeed the breaker for the water heater) And if I'm reading the wiring diagram correctly... 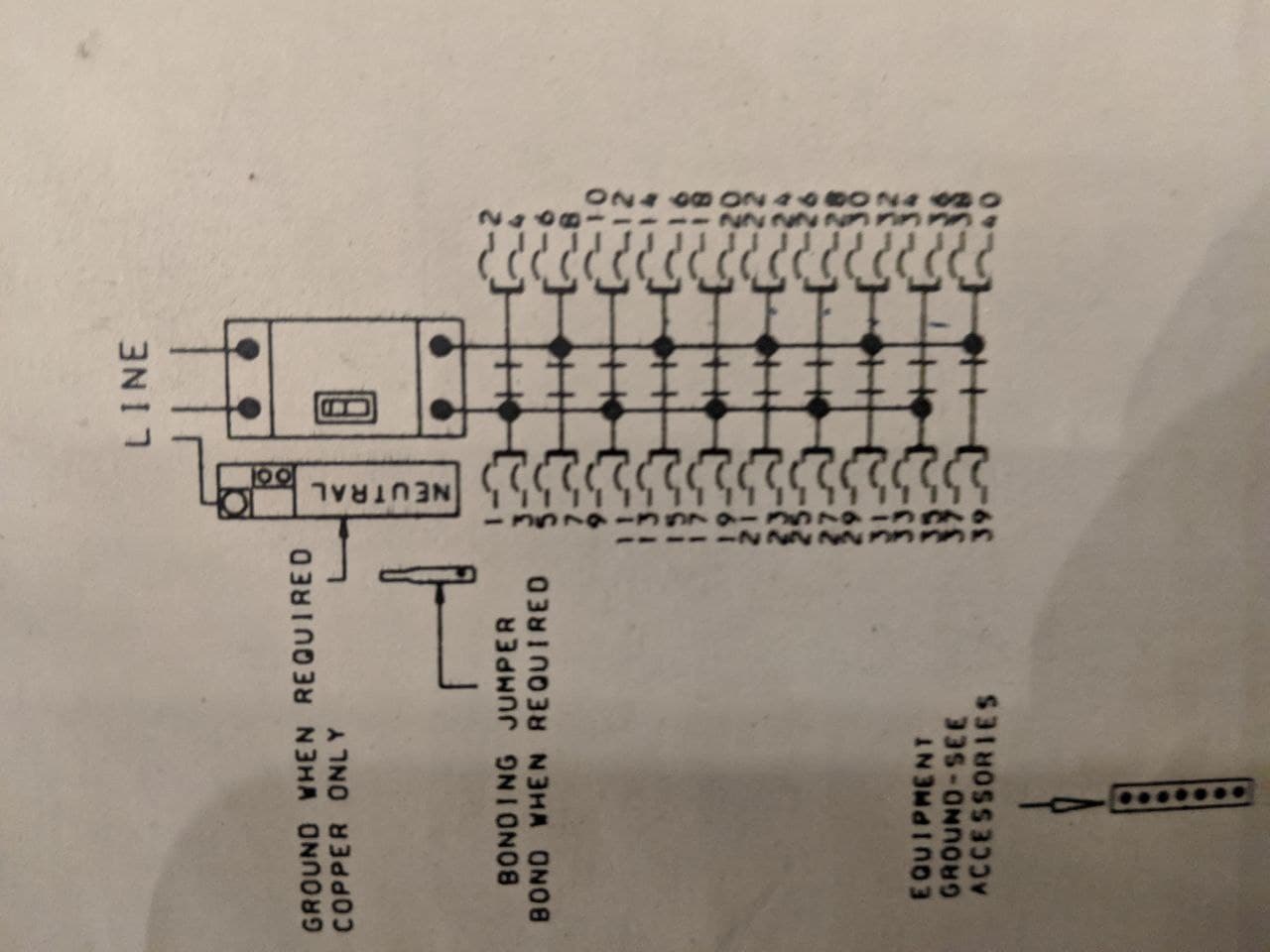 It appears that it's now on pins 9/11 which is one phase, instead of staggering 11/13 which are 2 different phases.

Oh boy...whoever did that work really botched it up good

You need to call whoever rearranged those breakers back and tell them to fix their messed-up work on their dime, or better yet, pay someone competent of your choice to fix their errors. What they did took a perfectly fine panel configuration with spare slots in it and likely damaged it, atop rendering your water heater and another 240V branch circuit inoperable from having both legs of the circuit put on the same supply leg. (If that other 20A 2-pole breaker was on a multi-wire branch circuit, it's worse, because now you're putting 40A down the neutral when the circuit's fully loaded.)

The reason for the issues with the panel is that GE "double-stuff" two-pole breakers are designed to straddle adjacent panel spaces, the way you see done in your original panel, and the panels are keyed to keep a two-pole half-width/double-stuff breaker from being stuffed into a single space the way whoever needlessly rearranged things did. So, they mangled the keying features on either the breaker, the buswork, or both in order to misplace that breaker.

Allow me to color in ThreePhaseEel's superb answer.

First, you need to understand how panel busing works. Check that link for the basics, however, the tandem/quadplex concept does not apply to GE -- the water heater breaker is NOT a tandem (note the handles are not independent!) Effectively, GE gives you 1/2" wide breakers and you "build your own" tandem or quadplex.

Apropos to that link, let's look at the phase striping on YOUR panel: Before. 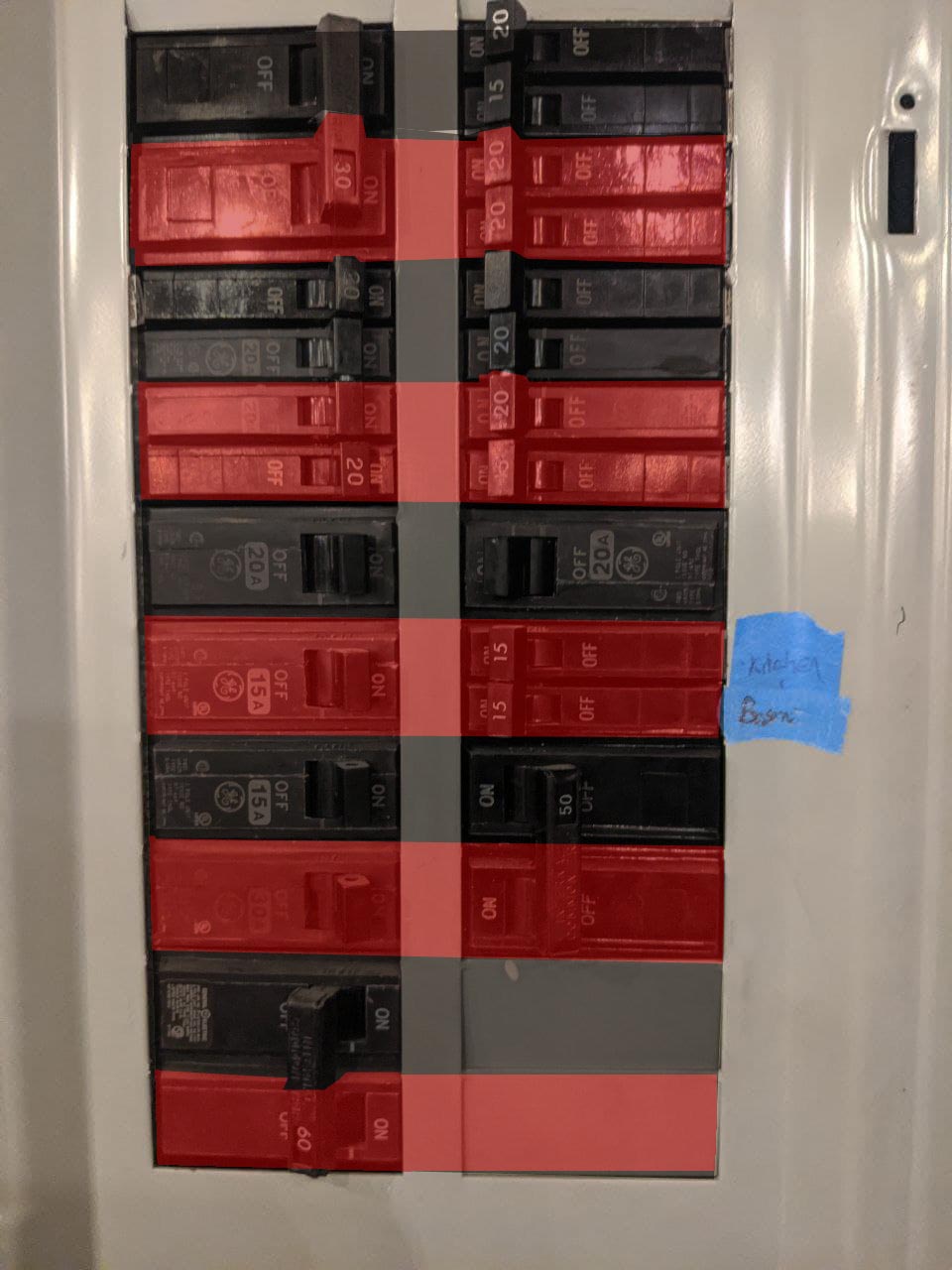 Notice how the 30A breaker at the top left touches both poles by sitting in 2 spaces. Note the size of this breaker and how it's the same size as the "4" half-width breakers below it. The center two are the breakers of interest for the water heater.

Notice how the 240V breaker must straddle 2 spaces, with a half-width breaker above and below it, essentially there as filler.

Now, let's see what the goobers did. After: 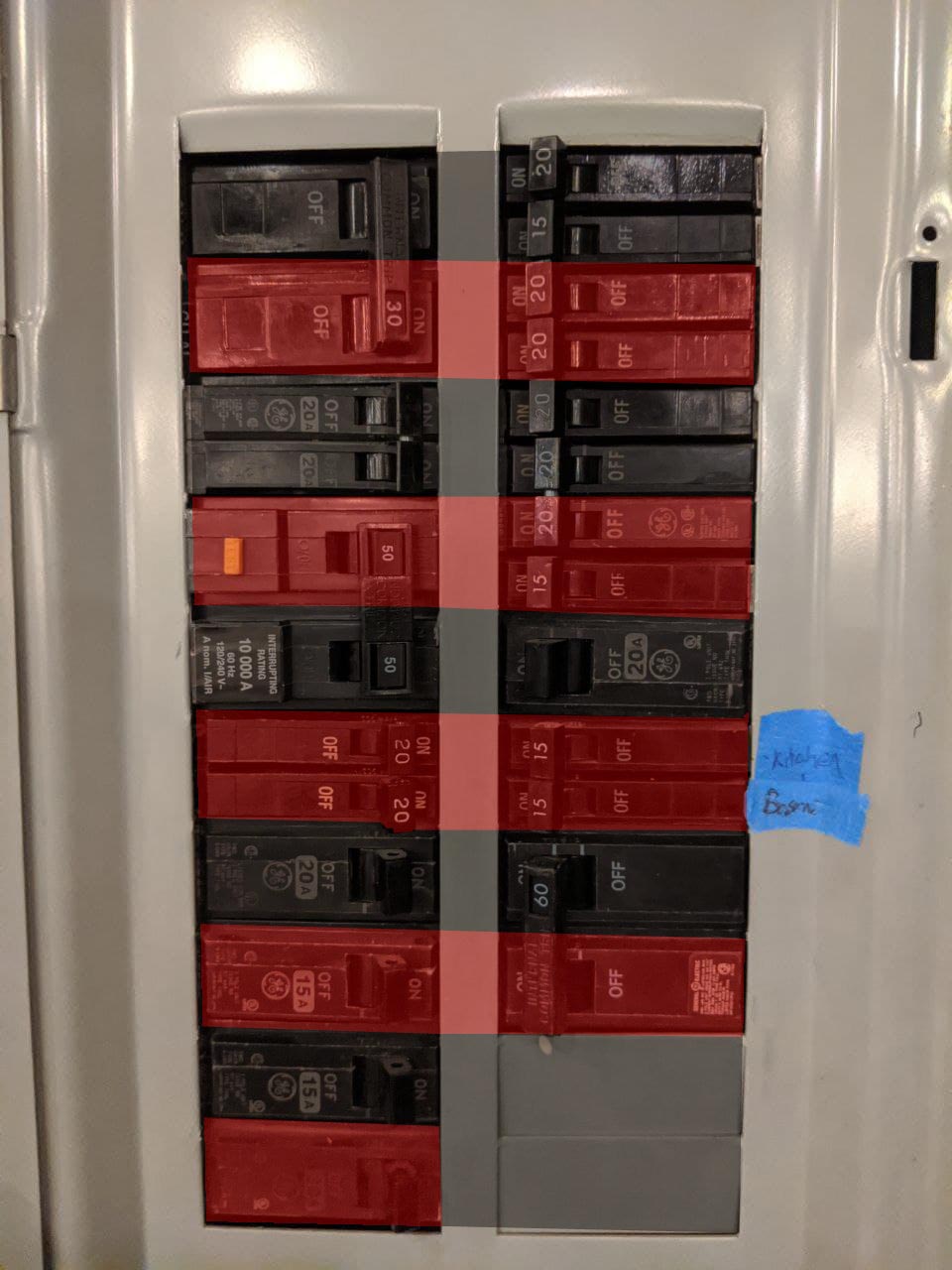 First, why the heck didn't they put the breaker at the lower right? eyeroll Clearances maybe?

Anyway, you can see where our "GE DIY quadplex" has been broken up. The outer singles have been pushed below the 50A breaker. The center 240V breaker has been placed above it, in an even space. It is no longer straddling spaces and no longer has access to 240V.

They should not have separated that "DIY quadplex". If they had simply moved the GFCI up or down 1 space from where it is, they'd have had a 2-space block to easily put the "DIY quadplex" phased just the way it was.

As ThreePhaseEel points out, the 240V THQP breakers have a "reject feature" to not fit in the wrong places. But it's only plastic, they probably force-fit it and broke it. Fortunately, that breaker is under $15.

Nothing goes in this panel except for GE THQL (wide) and THQP (narrow) breakers... and Eaton's CL line (wide) which is made for this panel.

To add onto what Three-Phase and Harper said, here's why they probably missed it

It's hard to see, but there's a piece of metal stuck between the breakers. I used Harper's colored version so it's easier to spot the phases. The metal runs between the handles so both phases trip if one goes. You have not one, but two 20A 240v setups using half-size breakers.

240v setups on half-size breakers are pretty uncommon but not disallowed. Your installer was probably only used to the normal two-slot 240v, which are much more common. That's no excuse for this, however. There should have been ample warnings this was a 240v setup.

If I were you, what I would do is not demand they put it back the way it was, but instead you need to play musical breakers. On the left side, you have four full-size 120v breakers. What I would want done is that they put your water heater on a normal two-slot 240v breaker, and then swap out two full-size for half-size breakers down the line. This might mean a lot of pigtailing (this screams "Let's make the wires fit on the current breakers"), but the end result should leave no doubt where the 240v water heater breaker is.

And, of course, find out why the bottom two slots on the right went unused. Again, my bet is short wires. If possible, swap that other 240v setup out for an obvious two-slot breaker.

Not the answer you're looking for? Browse other questions tagged electrical electrical-panel circuit-breaker 120-240v or ask your own question.

4
Amp rating of ganged circuit-breakers
4
Using a 30-amp tandem circuit breaker for a 120/240v circuit?
0
How do I figure out what this 30amp 2 pole breaker is doing?
3
Need another 240v breaker
2
Instant water heater wiring
1
What is the purpose of the twin single pole breaker?
15
GFI outlets tripped after power outage
3
Wrong installation of tandem breaker for 240V burn water tank
3
Can I replace a quad breaker with a tandem breaker?
2
Why is my main breaker tripping when I use a pool heater on a 50A breaker?