Ask Question
Asked 4 months ago
Active 4 months ago
Viewed 2k times
12
This question already has an answer here:
Studs cut to fit the sewer pipe -- is it ok? (1 answer)
Closed 4 months ago.

The community reviewed whether to reopen this question 4 months ago and left it closed:

Original close reason(s) were not resolved

I'm doing a bathroom remodel and adding a utility sink for my wife's art studio on the floor above. When we talked over the plan, I decided to go with the 2" drain they said I should use, but I had wanted to send it through an interior wall. However, they talked me into the exterior wall and said they would connect to the tub drain right where it came down. I even installed a ledger ahead of time and we talked about drilling through it for the drain.

Somewhere along the line though, the plumber changed his mind and went through 2 structural 2x4s. I was shocked when I saw it. There's less than an inch of wood on either side of the hole.

What should I do? Doesn't this weaken the wall? It even blocks me from installing the other ledger I'd planned and one of the joists it goes between has a huge gouge out of it I'd planned to deal with.

Here are some pictures: 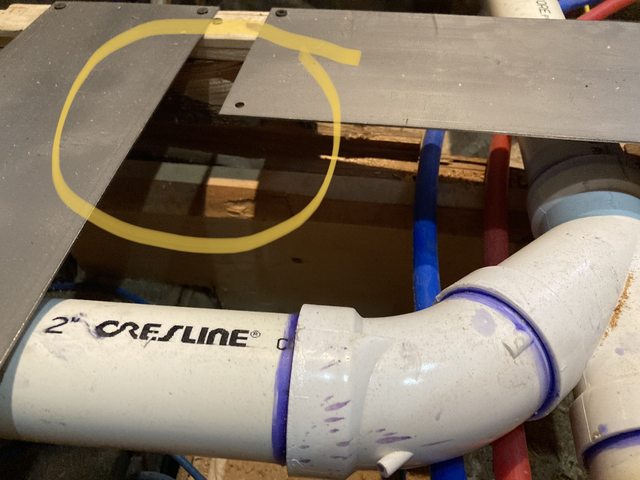 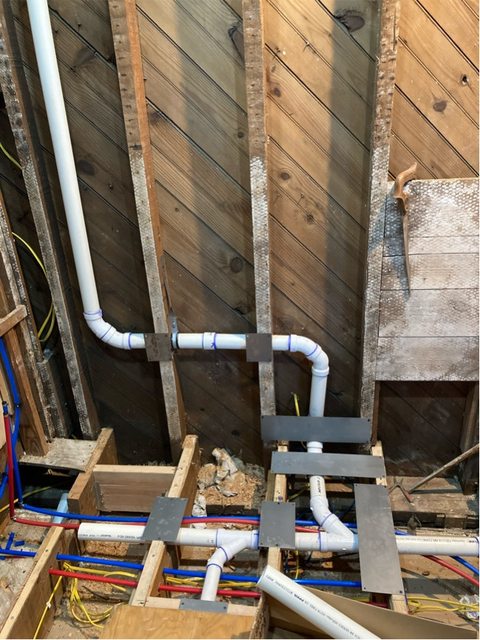 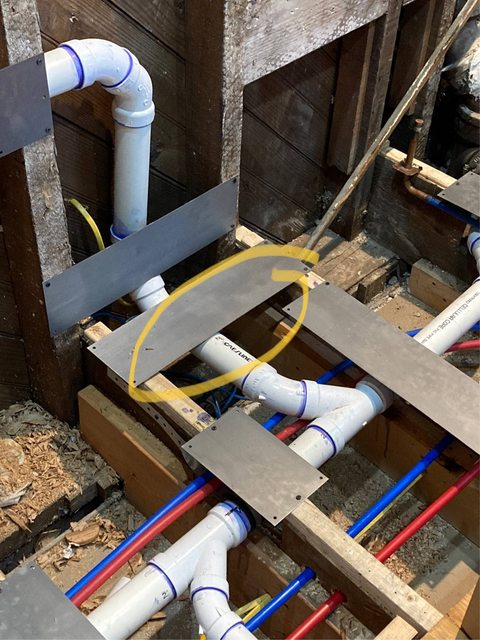 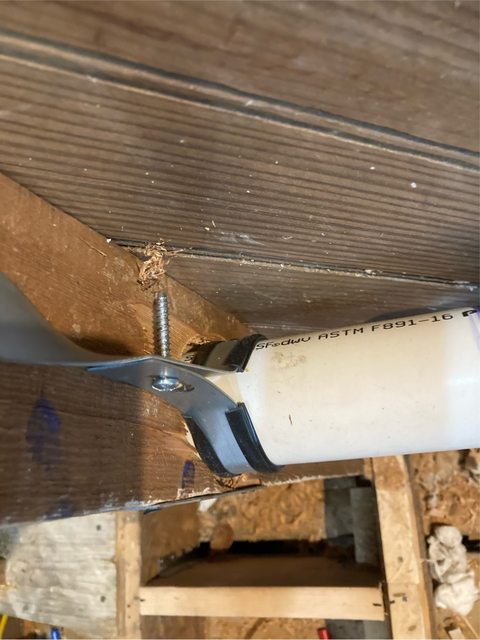 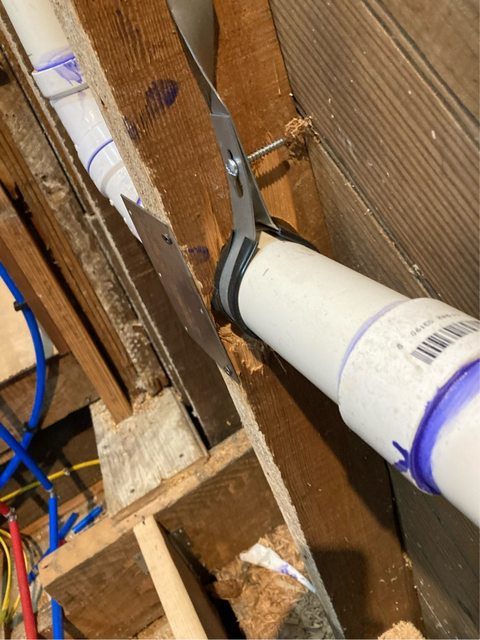 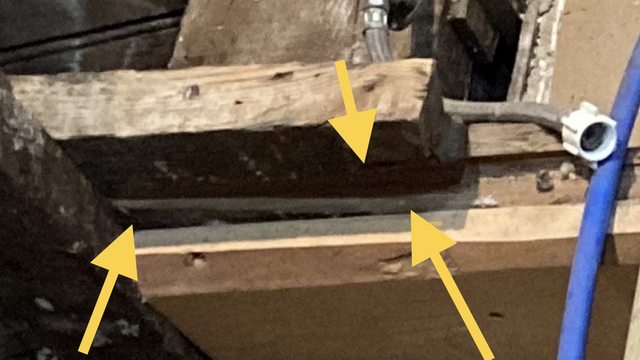 I thought I would add an earlier picture of the joist I was going to shore up. It's a little hard to see due to the shadow, but there's a horizontal chunk of wood that is missing just above the sister. My plan, before the pipe was unexpectedly routed there, was to add a ledger on either side. That joist was notched way too wide before I bought the house. Now with the pipe in the way, I'm not sure how to address this. 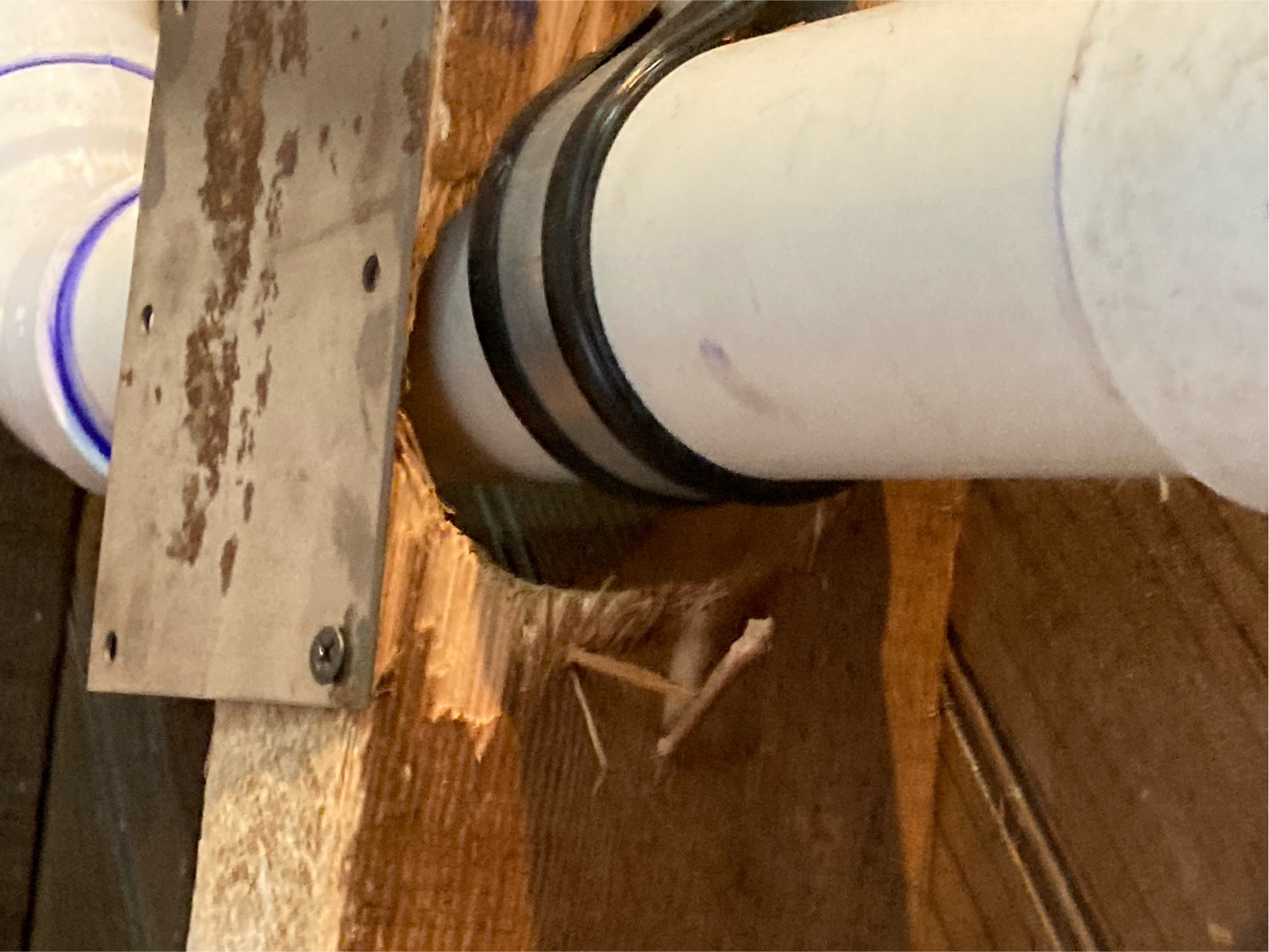 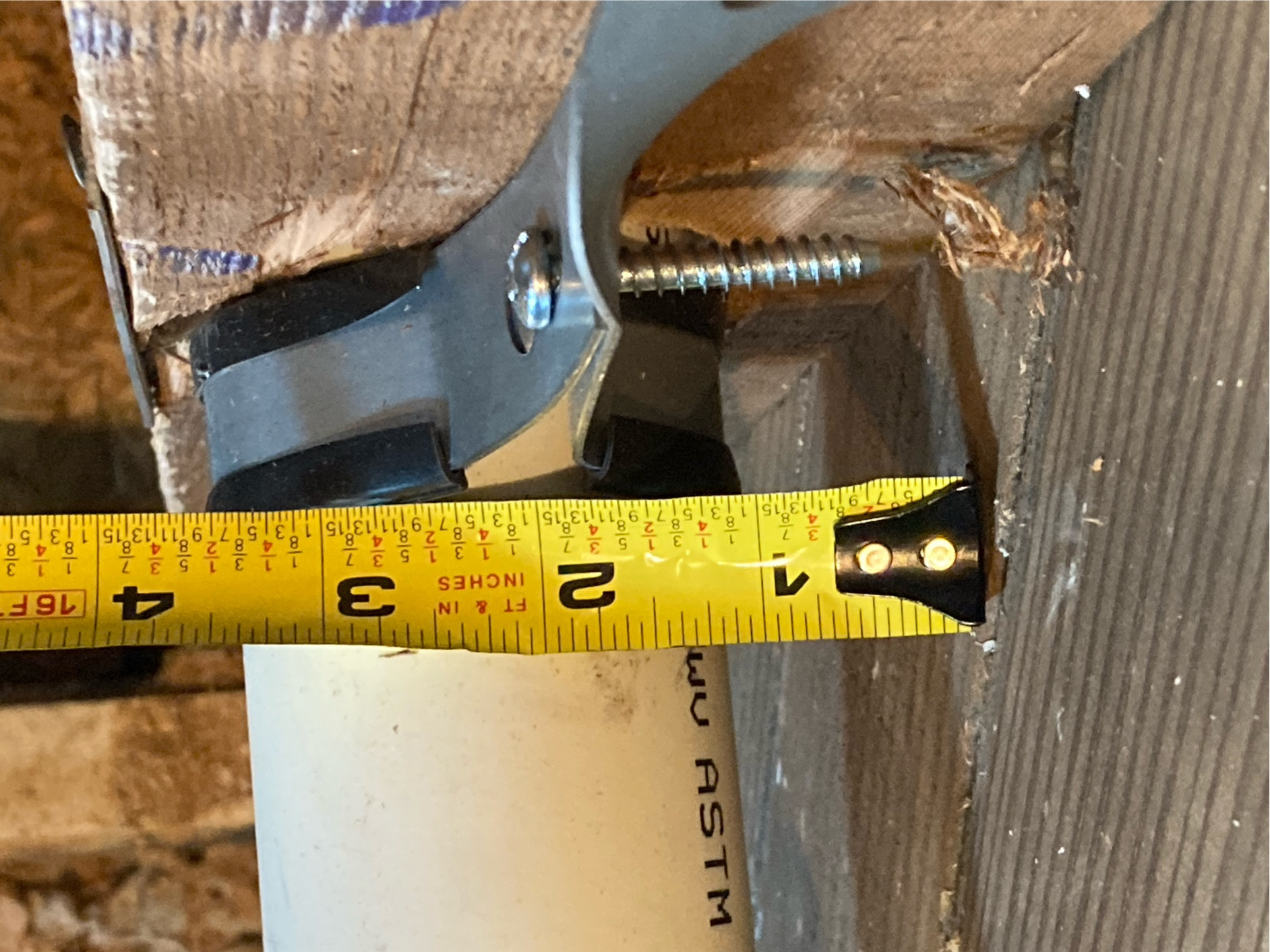 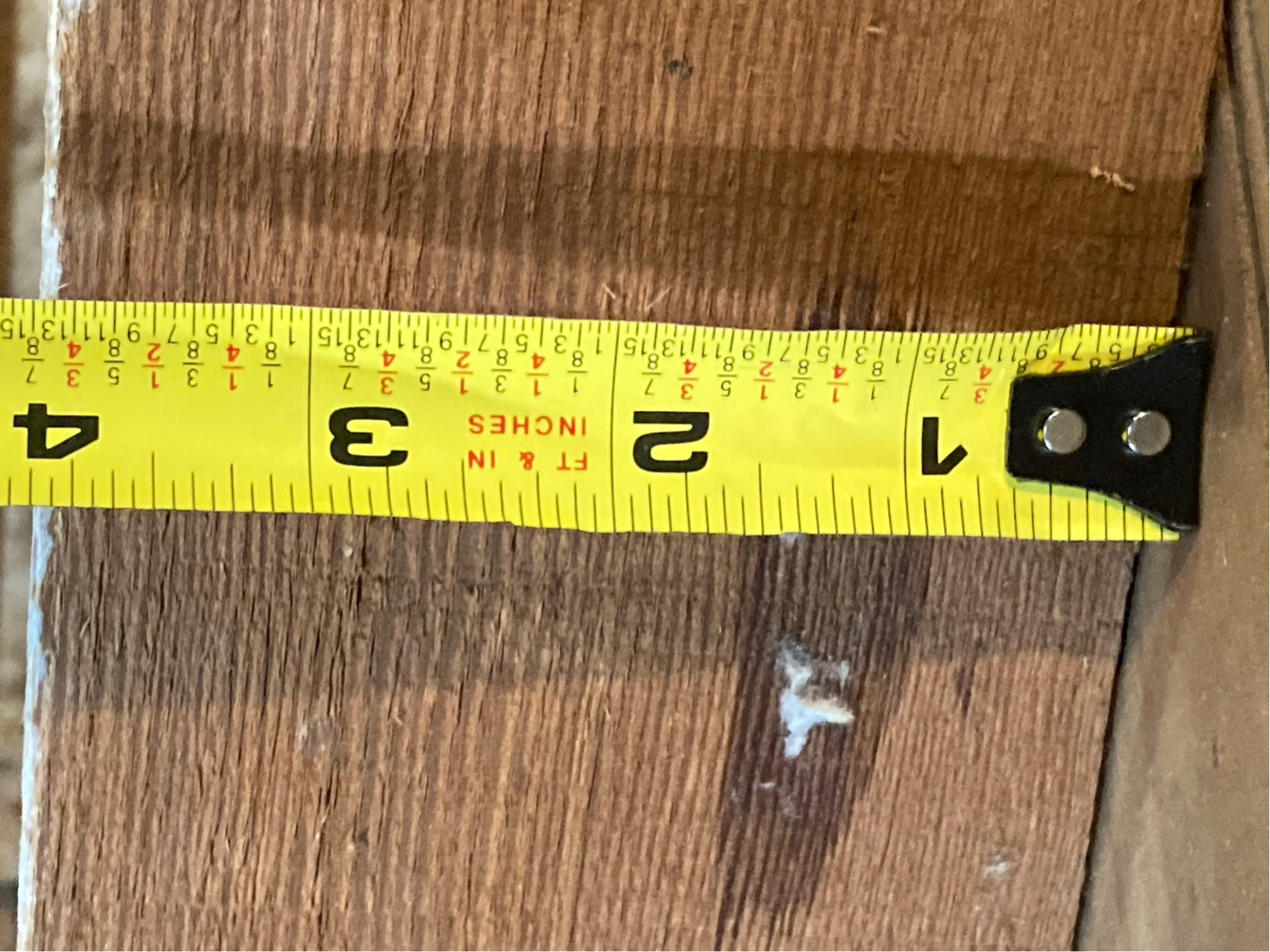 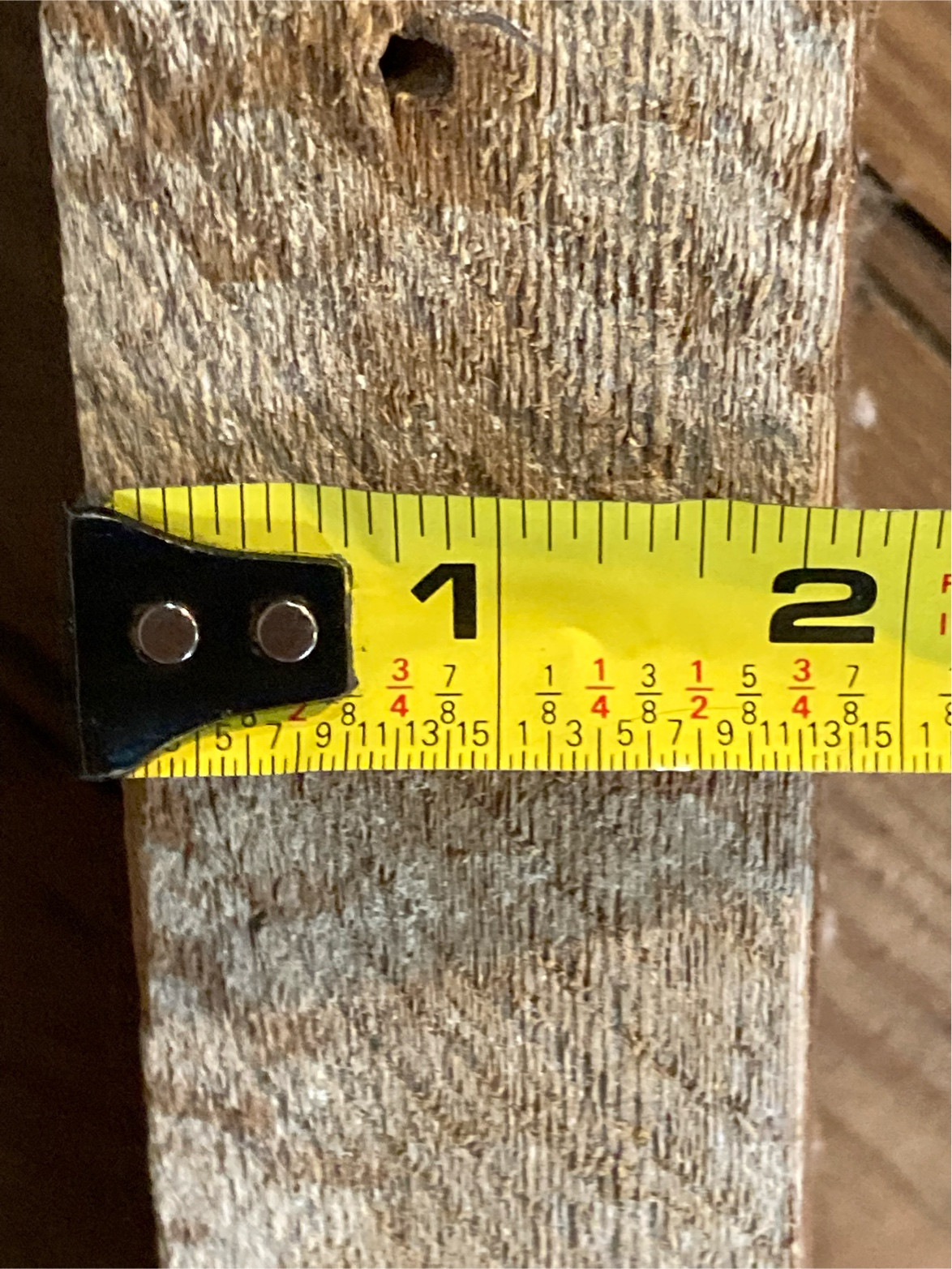 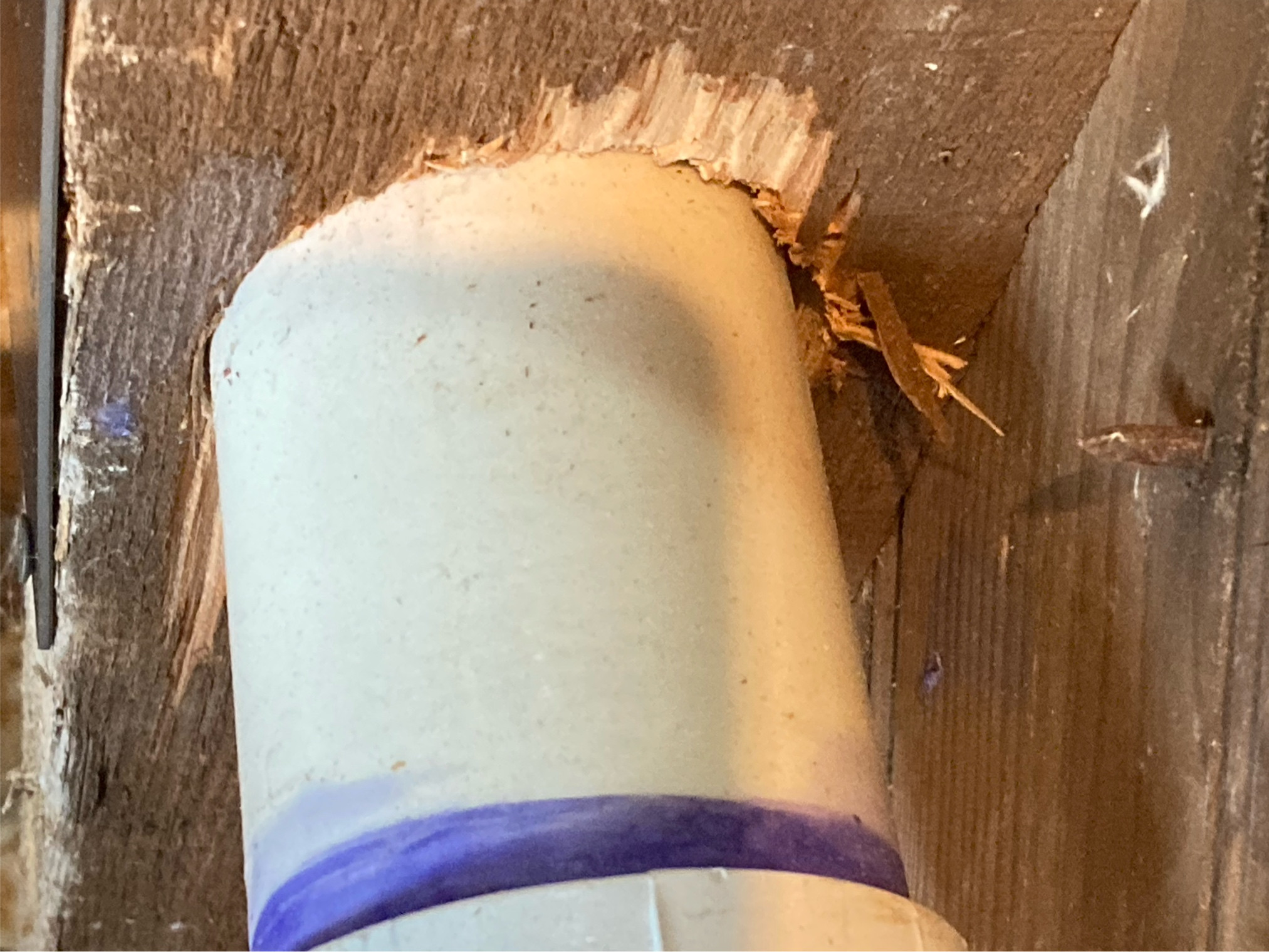 Update: I just spoke with the building guy at the township construction and code enforcement office. He pointed out that given the shape of my roof, it is a loadbearing wall. I forget the name of the roof type, but it's essentially almost like a pyramid (with a wide peak). I thought this was a significant detail I should add. 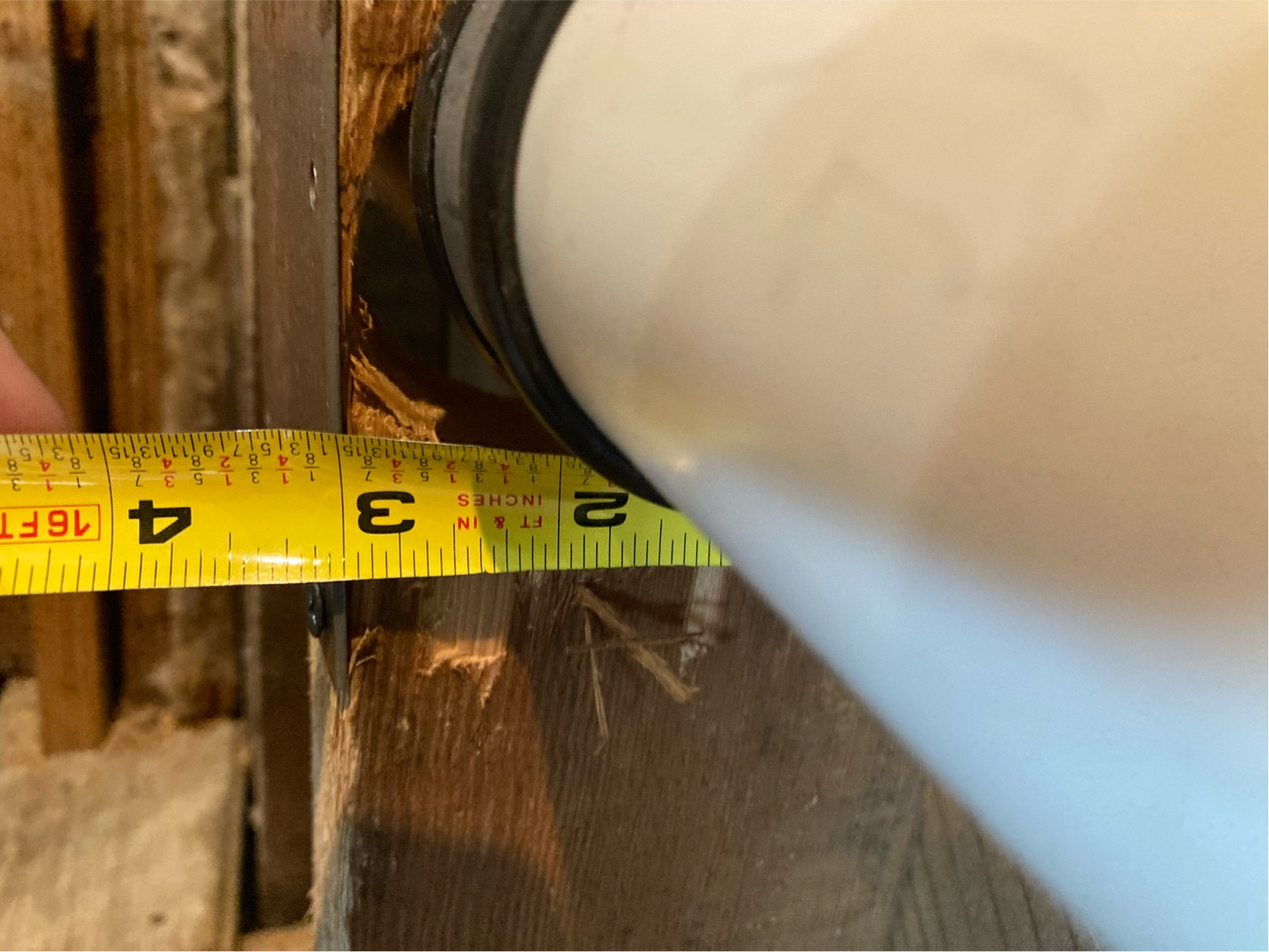 Since your house is the vintage it is

Old houses, like yours, that predate modern lumber dimensioning often can't use stud shoes, as you discovered. Since you're in that boat, you can try nailing a 8-10" piece of 2x blocking that's been notched to go around the pipe to the studs in question (this was what was done to reinforce the studs that were notched for the kitchen sink drainline in the 1950s ranch I live in).

For folks with modern studs...

This sort of problem is precisely why stud shoes are a thing. These are sheet-metal pieces that fit over the pipe-in-stud-hole and are nailed or screwed into the stud to reinforce the weak spot the hole created. I'd use Simpson HSS2-SDS1.5s (shown below) for this job; they're a bit trickier to install as you have to bend part of them around behind the pipe, but they're capable of transmitting both tension and compression around the hole, something regular stud shoes aren't rated for. (They also come with all the screws you need to install them.) 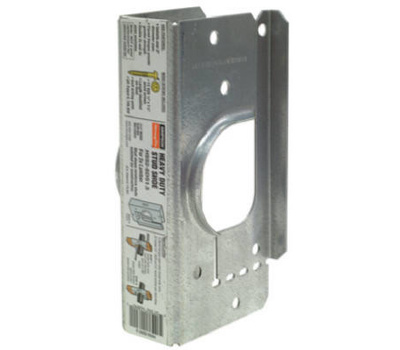 P.S. If the shoe doesn't quite fit because the hole's too far forward, you should be able to use a shim between the front of the stud and the front of the shoe. The results won't be great, but they'll be better than what you have...

There's really nothing to worry about here.

Not the answer you're looking for? Browse other questions tagged plumbing walls or ask your own question.

3
How to best reconfigure this plumbing for cabinet replacement
5
How can I attach pony wall to surface of platform and will it be strong enough against lateral forces?
0
How should I vent this sink drain
0
Proper way to brace a knee wall with hold downs
1
Adding a 24" closet door to interior shear wall
1
house well pumps and softener system inside or outside workshop
2
How to fix a joist that has been cut out
1
Which of these options is the safest/most efficient method to plumb a kitchen sink drain in an island?