What is this pipe in basement wall and how should I seal it?

My son just got water in his basement from some water coming in through some small pipes (not copper) that protrude from his basement wall. I have never seen something like this before. 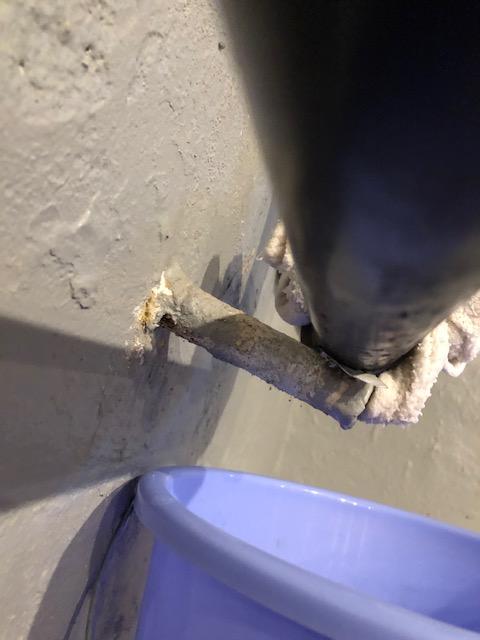 The pipe is about 2 ft above the basement floor. The larger pipe sitting on top of the small pipe in question is the supply line for their steam heat and was not part of the problem. It is a 1920's vintage home on the East Coast. They were having heavy rains that have saturated the ground. There are three of these pipes spaced across the wall that is at the front of the house.

At some point, water started coming in through 2 of the pipes (the 3rd pipe appears to be sealed with caulk or something). The water was a steady flow, not just a trickle but it was low pressure. You could stop the flow with a finger and they were able to stop the flow by stuffing a rag into the pipe. I am pretty sure it was ground water coming in. They have been in the house for 3 years and this has never happened before and the previous owners had never mentioned this. The ground was already saturated and they were having heaving rains from the remnants of Hurricane Ida.

The arrangement of the pipes (3 @ equal spacing 2' above the floor) indicates these are groundwater relief holes (weep holes) for releasing the excessive hydrostatic pressure caused by fast-rising groundwater during the rainy season. Your normal groundwater should be way below the pipes, thus most of the time they will be dry.

Do not plug them, the wall wasn't designed for elevated water pressure from outside. It is advisable to install a sump pump in the basement near the wall and have scattered floor drains and embedded pipes to divert the water towards the sump pit.

ADD: Another cheaper way to do this is by connecting the pipes to a larger drain pipe that releases the water at a convenient drain point.

I have the same pipes in my basement, they are for groundwater drainage overflows. I joined them together into a larger 2" pipe running into a container, I used a garden rainwater butt, and put a float operated pump inside to automatically empty the butt when it fills up. No problems with it for last 5 year, fills the butt 2 - 3 times a year.

The small pipe looks like it is used as just a support for the bigger pipe. It might go though most or all of the wall and ground water is finding a way in.

Usually the best way to seal something like is from the outside by digging down to the problem area and sealing.

Most inside sealing usually does not last too long, but is okay for temporary fixes till permanent fix can be made.

Not the answer you're looking for? Browse other questions tagged pipe or ask your own question.