Outdoor Water Spigot Will Not Turn

I'm having an annoying issue with an outside water spigot. I was watering the yard the other day and kinked the hose so I could put on an attachment. Finished watering and when I went to turn off the spigot I noticed the wheel would not turn. It doesn't turn clockwise or counterclockwise. I turned off the water supply inside the house and tried to diagnose the issue. I removed the wheel, the nut/washer, and attempted to turn the stem but it will not turn either. I'm trying to determine how to fix this. Can I simply remove the sillcock and replace that or is that attached to the pipe that goes into the house, in which case I need to replace the whole thing? Hoping there is a quick fix before I attempt to replace the pipe and sillcock completely. 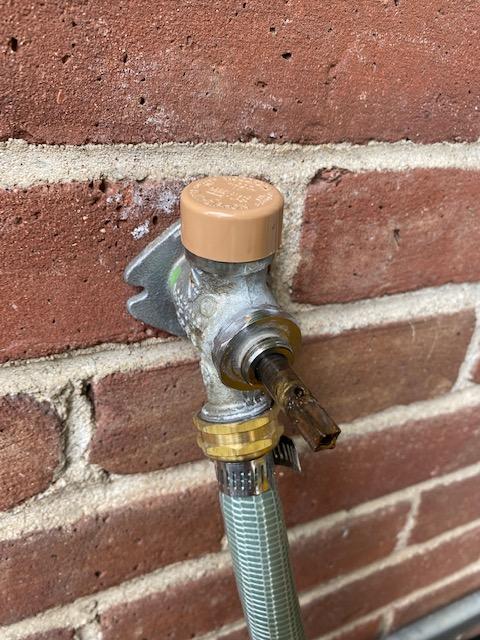 In a comment, you said, "I think the sillcock is attached to the pipe (all one piece) which is 12 inches long. Goes through the brick and I believe its threaded on the end" and that sounds like that's exactly what you want!

It's a "frost proof" spigot, where the actual valve is inside the house so it doesn't freeze up on you in the winter. The 12" of empty pipe protects you from flooding.

Since you know where it connects inside, it's very likely a simple job of unscrewing it from the inside (2 wrenches - one on the elbow under the sink to hold it steady, and one on the sillcock's pipe to turn it), removing it and replacing it with a new one.

It looks like a replacement will run you in the neighborhood of $40 USD. You can probably replace it yourself in about 30 minutes if you know what you're doing, so budget 2 hours, just to be on the safe side. (My rule of thumb, even after years of working on my own house.)

3
Why won't my toilet's water valve not turn off?
1
What can I do about a saddle valve that won't turn on?
1
Getting water to external spigot
0
Spigot leaks when sprinklers come on
0
Issues installing water spigot
1
How to replace an anti-siphon spigot without access to the back end?
1
Replace Water Shutoff Valve Stem with Repair Kit
2
Replumb sillcocks to increase outdoor pressure?
1
Cap copper pipe outside
1
How do I replace a tub spout with a hose spigot?