What's the best approach to descaling or de-flaking or cleaning or reducing the amount of, what I think is, mostly iron scale on the inside of the house's piping? I know I have ferrous and ferric iron (and manganese) in the well water because I had it analyzed. The water is also moderately hard (71 mg/L).

A couple of months ago, while a well guy was assessing the system, I got a slug of sediment/scale (because he had me temporarily bypass the filter system I have) probably from the bottom of the just-emptied waterlogged pressure tank because after that, the washing machine never filled with cold water during its startup and its inlet filter was found to be clogged. The contamination looked like flakes of rust - from pinhead to 1/8+ polygons. I cleaned the washing machine inlet filter and the washing machine filled OK.

I've since replaced the pressure tank so I know it's no longer a source of junk.

Today, I replaced the washing machine (not due to this water issue I'm writing about here) and when removing the cold supply line I noticed significant multi-sized polygonal particles again partially clogging the inlet filter. The particles are more broken-off-scale-like rather than (dusty, fine, soft) sediment. I flushed the cold supply line about 20 gallons worth (into a bucket) and the count of particles decreased by only about 50%.

I suspect this contamination is from scale on the insides of the house piping (1" PVC, 100ft from the pump house to the house) and the typically-sized (unfortunately) polybutylene pipes in the house.

Why I suspect it's pipe scale is because I have spin-down 50 micron filter and a 5 micron sediment (string?) filter that has a clear housing - the spin down SS element gets fuzzed up with "dusty" sediment but no discernible larger polygonal particles and the same with the 5 micron filter element - it's rust-colored but not larger particles.

The water heater is old and I suspect it is filled with sediment on the bottom - I'm going to schedule its replacement soon.

Could these dark-colored flakes/particles have come from the well casing (1987) and been introduced into the house piping before the whole house filter set up was installed (2016-ish)?

How to get rid of the particles in the piping? Is it just a matter of simultaneously running all the fixtures wide open for a "long" time? Do you remove the aerator portion of each faucet first? Or, is there some sort of "treatment" involved? Vinegar, sodium bicarb, CLR, etc.?

8/29 - I added a pic of the particles as trapped by my only-24-hr-old washing machine cold water supply inlet filter. 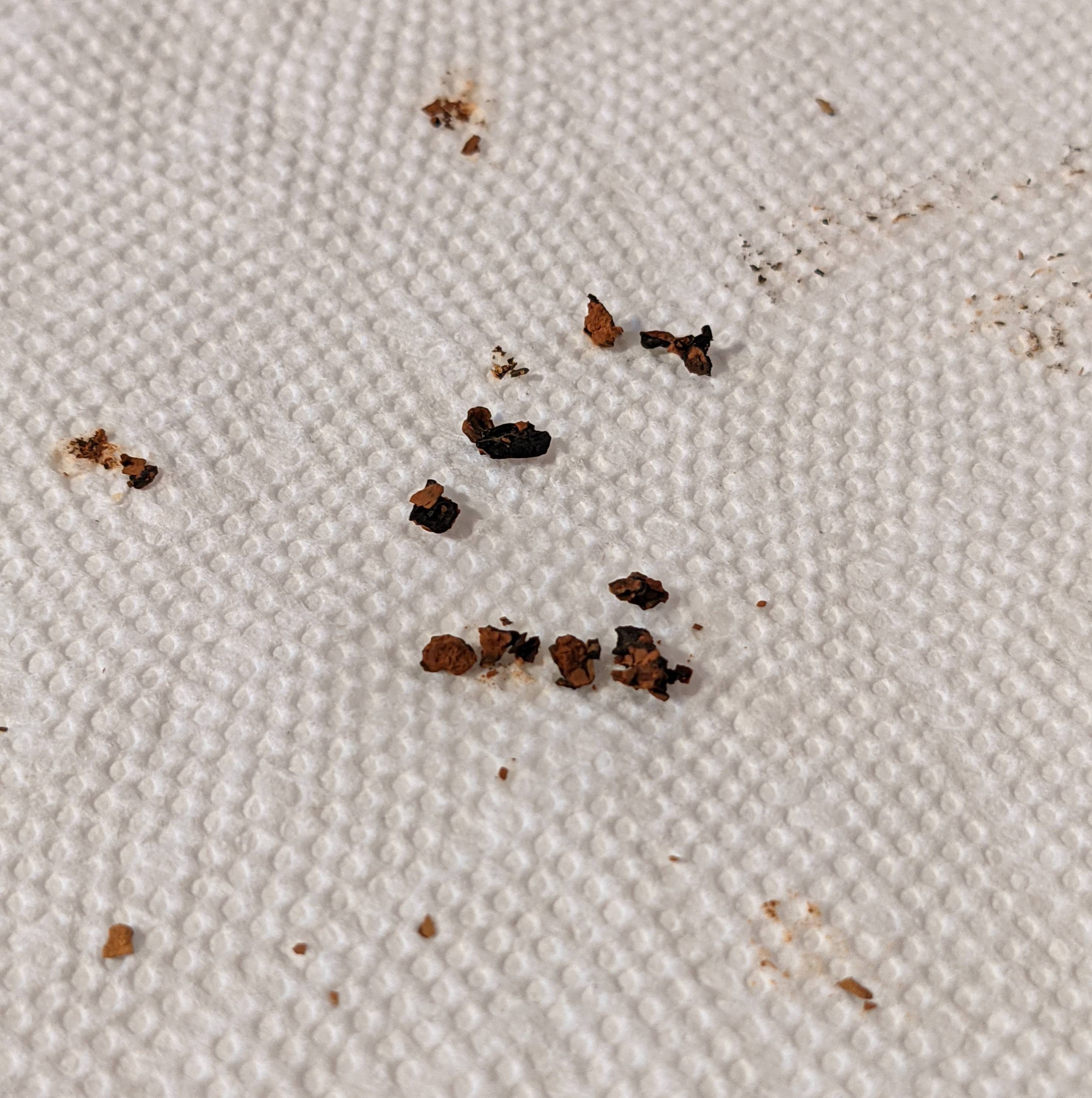 Are you saying you have steel water pipes? Steel water corrosion is more likely in soft, low hardness water. Moderate hardness usually protects steel with a layer of carbonate. Rust is amorphous to the eye. If you have geometric material seen in the sludge, it is likely sand or other insoluble mineral. Iron must be ferrous to be soluble in water; usually it oxidizes to ferric when exposed to air and precipitates as a red/brown gel ( not solids), although it may coat other particles and make them brown. I would continue filtering the water and have sediment analyzed before attempting to clean your pipes.

Not the answer you're looking for? Browse other questions tagged plumbing well or ask your own question.

3
What could cause low pressure in both hot and cold water lines after flushing hot water tank?
2
How can I determine why all the faucets are giving only warm water when turned to cold?
2
How should I deal with sediment in my water lines? Whole-house filter?
0
What kind of a valve is this?
2
Looking for advice / critique on my residential well water filtration system