Will indoor moisture be a problem with an externally-insulated shipping container?

She shares this diagram of a conventional framed house: 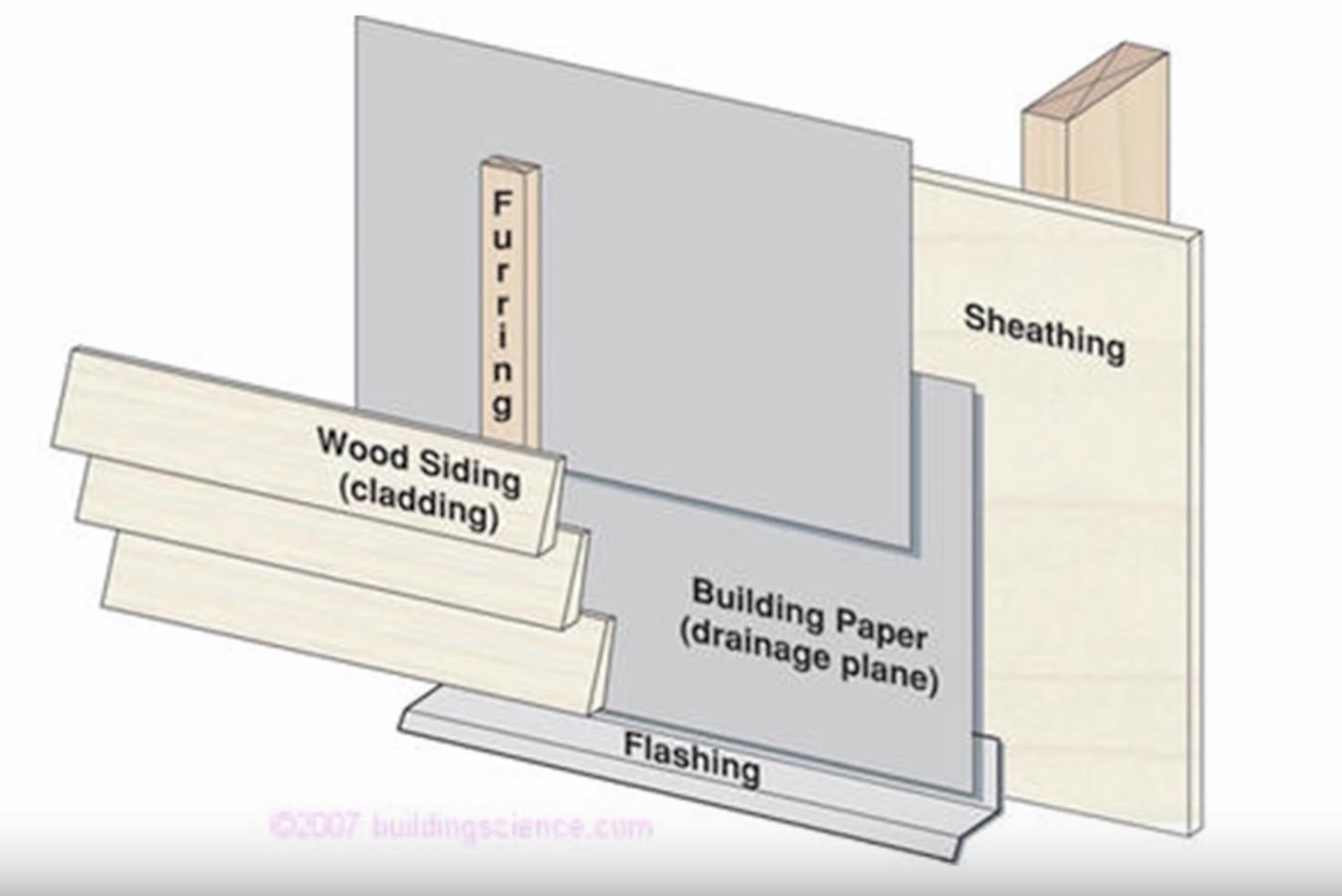 In a normal framed house, what keeps moisture from forming on the inside of the vapor barrier/building paper? Isn't the building paper is still exposed to old outside air? As long as there is enough insulation between the studs, and the sheathing reduces the thermal bridge of the studs then everything should be fine, right?

If we replaced the building paper, furring, and cladding, with corrugated steel it would still have the same effect, right? As long as there is the same level of sealed insulation inside the container (and maybe add something like this to fill the gaps in the corrugation) we wouldn't expect any condensation. 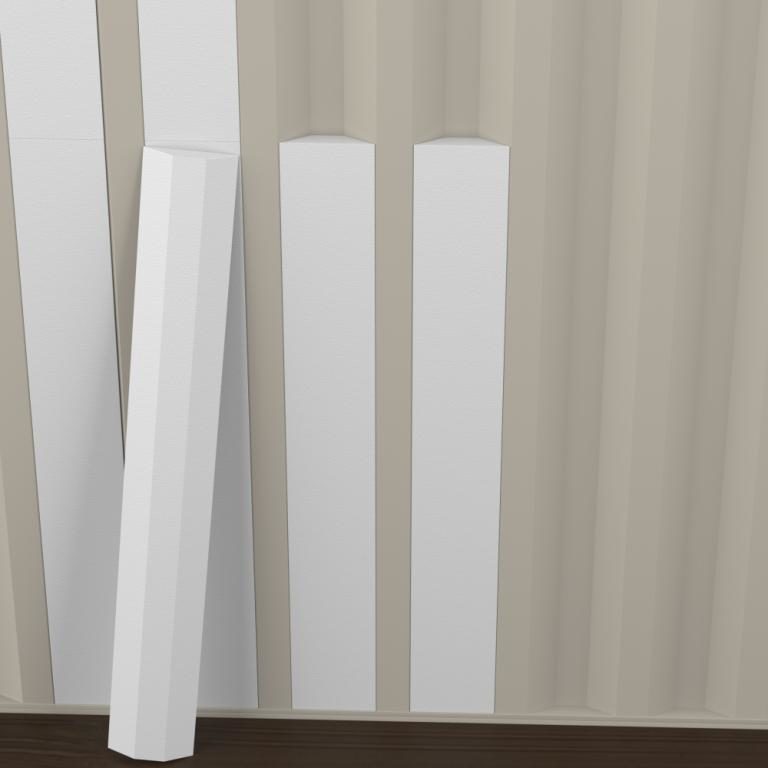 I think you're conflating house wrap with vapor barrier.

The house wrap goes on the outside to prevent air infiltration and to help keep any liquid water (but not vapor) that makes it past the siding away from the wood sheathing. The house wrap is designed to function like a Gore-tex™ jacket - it keeps the rain out, but sweat from the hot individual inside the jacket can still escape as vapor, thus keeping you dry inside.

The vapor barrier goes on the inside of the insulation to keep water vapor from the house out of the walls where it could condense into liquid water, compressing the insulation (ruining its performance) and rotting wood. This layer is (or should be) totally impervious to water and water vapor much like a rubber rain coat. It will keep all that sweat inside, making the wearer almost as wet as if he weren't wearing it at all. This is why well built modern houses that are tightly air sealed need good ventilation and fresh air exchange.

For your shipping container, you would want the insulation - fill in the corrugations, then a flat sheet over the outside - then a house wrap to keep liquid water out, then your exterior siding. On the inside, put up a vapor barrier to keep any humidity away from the metal on the inside. Not so much to prevent condensation (the insulation on the outside should take care of that), but to protect the metal from excessive moisture to delay the onset of rust. Note that your interior vapor barrier might be a good, quality coat of paint, especially if you're going for the rugged industrial look that comes by default with a shipping container.

Condensation happens when warm, moist, water-laden air makes contact with a cold source. Colder air cannot hold as much water vapor, so by chilling the air, the water must condense out. Moisture gets there because air does.

The siding's job is to keep water rain off the building paper. The building paper (e.g. "TYVEK" on every house under construction) is supposed to block air flow. The paper itself tends to change temperature with the air -- it's on the outside of the insulation envelope, and the paper and the sheathing is a relatively good insulator.

Metal is an extremely poor thermal insulator. So you have a double whammy.

First, the metal is conducting outside cold into the container, causing the inside of the metal skin to be as cold as outdoors. That means anywhere interior air can possibly get in contact with the metal of the container, condensation IS happening.

Second, metal rusts really well when in presence of water, so capturing water and holding it against steel is a recipe for disaster. You will get rust blooms and "rust-jacking" which will only open up the gap in the vapor barrier more.

So you only have 2 choices, neither good:

Ask any of the curators of museum ships about that.

Everybody goes "oh, we'll just spray foam" - except, foam is far from perfect, and is not non-porous to liquids or vapors. It's also toxic if improperly mixed, as well as one of the reasons homes burn so fast of late. It will turn the container into a fast-burning inferno that may not be escapable.

The metal on the inside of the insulation envelope works in your favor.

It is adding its considerable thermal mass to the inside of your insulation envelope. That means it helps resist changes in temperature (i.e. level out temperature).

Since you are holding the metal at stable (interior) temperatures, you also don't get slams of condensation on the interior. On the outside condensation is unlikely because underneath the insulation, the metal will be warmer than outside air at almost all times, unless you are running air conditioning. And you limit the access to moisture-laden hotter-than-interior air with vapor barriers - preferably multiple layers of them.

As the video says, some people like the industrial grunty appearance of containers; but you can replicate that easily enough in wood siding; simply do board and batten and bevel the battens like that. Or you can probably find "metal roofing/siding" with that general look.

Exterior insulation is also incompatible with handling the house actually as a container: on ships, trains, trucks, with container cranes and the like. In this case you will need to either aggressively dehumidify the interior at all times (hint: solar panels on roof), or just accept the short service life. Expect to have the container rejected by the shipping company at some point and have to abandon the container in that nation.

The sketch below shows how the insulation prevents condensation to form. 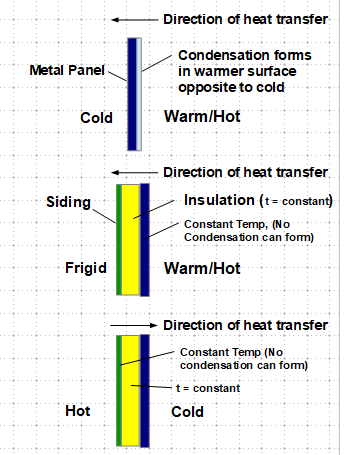 Note, the metal panel and some of the sidings will heat up/cool down very fast when exposed to the heat/cold source. The temperature in the insulation will decrease slightly and slowly from the face exposed to heat towards the cold surface, due to this buffer, condensation will not occur because the elevated temperature difference will not be there.

4
Should I install a vapour barrier if I'm using rigid foam insulation?
4
How should I insulate a room built into a metal barn?
0
What kind of damp do we have?
1
After 6mil vapor barrier in crawl space, moister gathering between insulation and flooring
2
Cold floors and drafts
0
Will insulating attached garage walls create a moisture problem?
2
Insulate attic above new bathroom?