Question about framing a lowered ceiling (like a large soffit.)

I am lowering a 10' x 10' section of the ceiling in my home for cosmetic reasons (to define an area) by about six inches lower. I plan to frame it like a soffit/bulkhead, with multiple long parallel "trusses". I had originally intended to frame it like long but shallow walls, with 2 x 4 top and bottom plates with short studs in between (like a ladder.) I would place these perpendicular to the ceiling trusses, mounted 16" on center. Exposed sides would get OSB for something more to nail to. Hope that makes sense. This structure would then be drywalled.

I realized that, since the lowered ceiling will be six inches, instead of building the long "trusses" ladder-style with short 3" studs between the two long top and bottom plates, is there anything wrong with simply sandwiching short pieces of 2 x 4 parallel instead of perpendicular (since it would equal six inches?) In other words - looking at one of the "trusses" of the structure from the side, the bracing between the top and bottom would run parallel instead of perpendicular - "stacked" if you will. Any issue with this in terms of strength, etc. since it will be carrying drywall?

Edit - what about a cleat and 2 x 6 joist, like this diagram @isherwood?

I reject both of your ideas as being way too lumber-intensive, particularly in this time of global price inflation. They're also too much work and too complicated. You should be suspending single joists (2x4 or 2x2), not building walls or trusses. Those are for load-bearing situations. A top plate in such a case does nothing for you.

Don't build anything--just hang new joists. That's all the situation calls for. Float your new joists below the old ones, and use scrap blocks at the horizontal intersections as suspenders. If you're using 2x4 joists, orient them upright and just hang them every four feet or so.

Leave them short on all sides so you can then nail on a rim joist. This could be just OSB ribbons to act as drywall backing.

Also, don't rely on pullout strength in nails. All nails should be horizontal, or use screws. You don't want them wiggling out over time in a vertical use situation.

Another idea, now that we have a clearer picture of the situation...

Just build a standard framed 2x4 wall and hang it using suspended ceiling screws and wire. One hanger every 40" (since you mention an odd 20" truss interval) in both directions should be plenty. You'll want to brace it diagonally to prevent sway after it's all hung and level.

Do a web search for "suspended drywall ceiling" or "drywall suspension system". You'll find tee and hat-shaped steel products from brands including USG, CertainTeed, and ClarkDietrich. Some are stocked by national home center chains; for others you'll have to figure out who are the building supply companies in your area.

These are lightweight and easy to work with. (I've used hat channel for furring but never built a suspended ceiling.) The weight is borne by wire ties secured to the structure above -- in your case, with wood structure overhead, an eye lag screw would be a likely choice. The weight of the suspended ceiling is carried by ties that go straight upward; sway of the assembly is controlled by wire ties or by rigid members that go upward at about 45 degree angles.

.. and here are a couple photos of a suspended drywall system to feed the curiosity. (photos: www.kuikenbrothers.com) 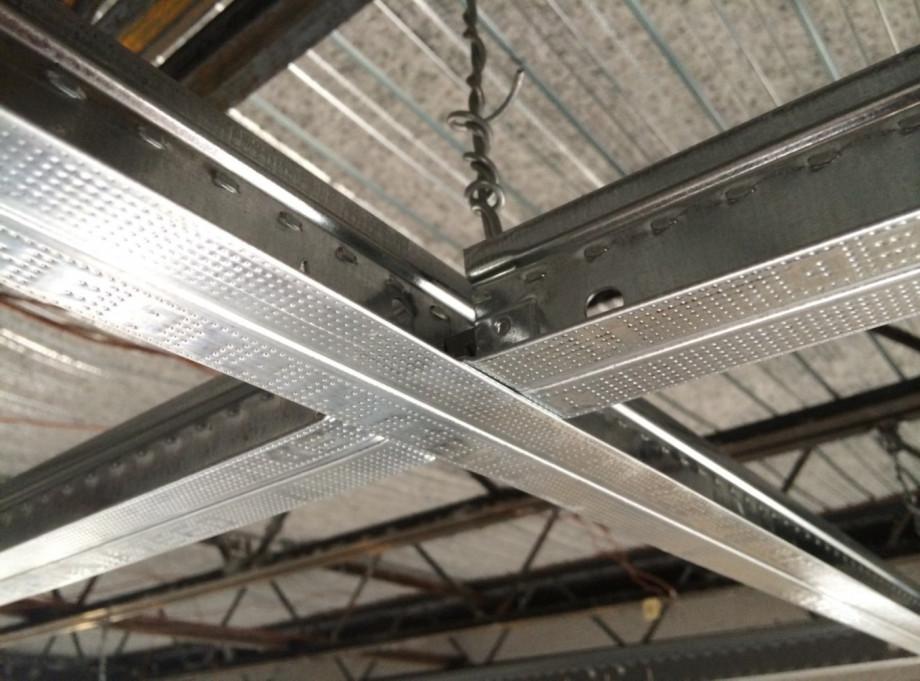 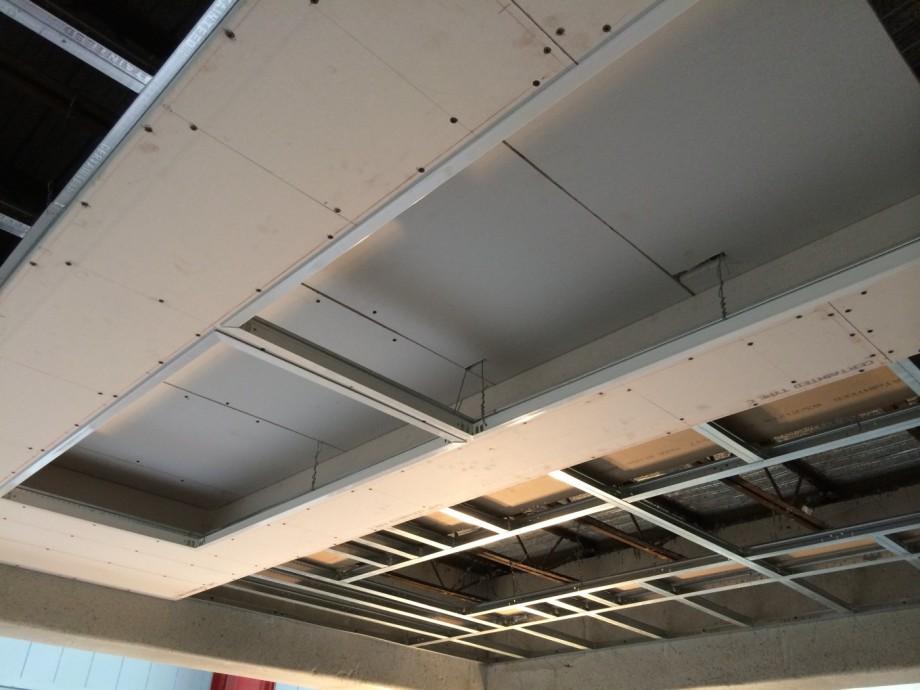 3
How to add ceiling joists to 20 foot wide garage?

4
How far can I move ceiling joists up?
0
Do knee walls in an attic need blocking between studs at the top for drywall?
3
How to confirm screw is attached to stud through wood plank and dry wall?
1
Framing a Wall with a Sloped Ceiling
0
2x4 trusses and 5/8 drywall ceiling
0
Attach Garage to Existing Wall
1
Help me build this soffit
1
Framing around PVC pipe
1
Install New Attic Access Ladder Perpendicular to Joists
1
How should I fasten a new steel bathroom wall to the ceiling between joists?