Can I add a breaker to this external main shutoff

Our neighborhood and my house has Square D QO equipment. There is the external main shut off with a 200 amp breaker. It goes straight to lugs and then the wires that go to the main panel in the house with all the house circuit breakers. I took a photo of how it looks outside on the house next-door who is awaiting hook up and closing. I drew a red line where I would want to insert one two pole breaker to put a surge protector on ( I have a Seimens First Surge Pro.)

What would have to be replaced? I see that 200 amp breaker being sold where it has the attachments for the meter on one side and the lugs on the other. Is there some thing that could attach those lugs that would give me a mount for a circuit breaker and then has lugs on the other end to reattach the wires going into the house? Or does that whole black plastic assembly that the main breaker is mounted on have to be replaced? How would you do it. Thank you so much 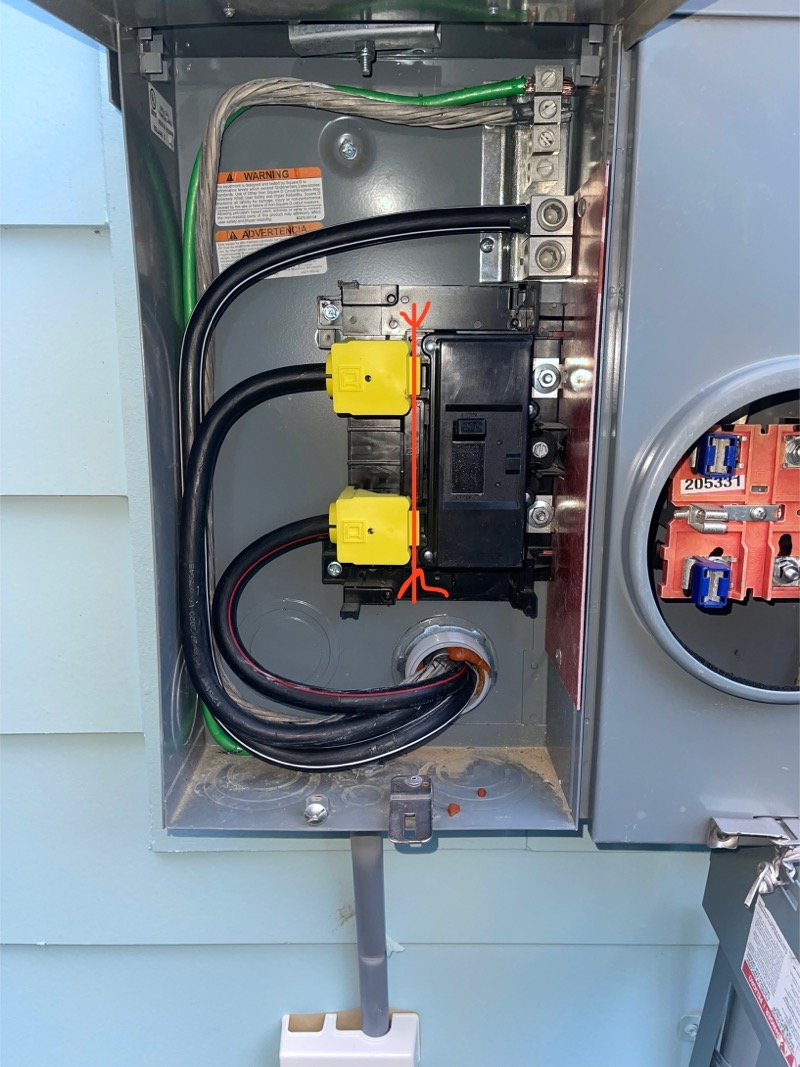 Where we live there are a lot of electrical storms that brown out, surge, trip breakers etc. And this happen often.

I picked up a Seimens First Surge Pro ( which is what is recommended by the manufacture according to the map of the country.) We actually aren’t as bad according to the national lightning databases as other areas but I have a family that lives in those areas and they don’t get brown outs and tripped breakers with every electrical storm. So there’s power grid issues too I’m sure.)

So I am putting additional equipment on the breaker panel in the house and at outlets ( 3-stage approach.)

I Try to focus on the one problem and said that I’m handling the inside issues. If I hit snags with that then I would ask a separate question.

I was putting forth why I need such a top end product. I know it doesn’t fix all of those problems.

I have one of the APC 10-circuit transfer switches which of course I know has its issue with fuses etc.… But I also have from an old computer networks a huge APC uninterruptible power supply ( 30 amp plug) that holds about 10 batteries and then an add-on huge rack that holds two more trays of the same. The APC transfer switch has UPS input and will electronically switch to the UPS supply ( with adjustable sensitivity too.) I am also wiring a Reliance P50 external generator plug jack to it ( have Southwire 6/3) so I can connect up my portable generator with 50 amp outlet.

On the inside breaker panel will be a Leviton 4000 series SPD that also has filtering.

So I was going to use the APC transfer switch to watch sensitive circuits with Philips Hue downlight, tv, etc. Basically making my own UPS. 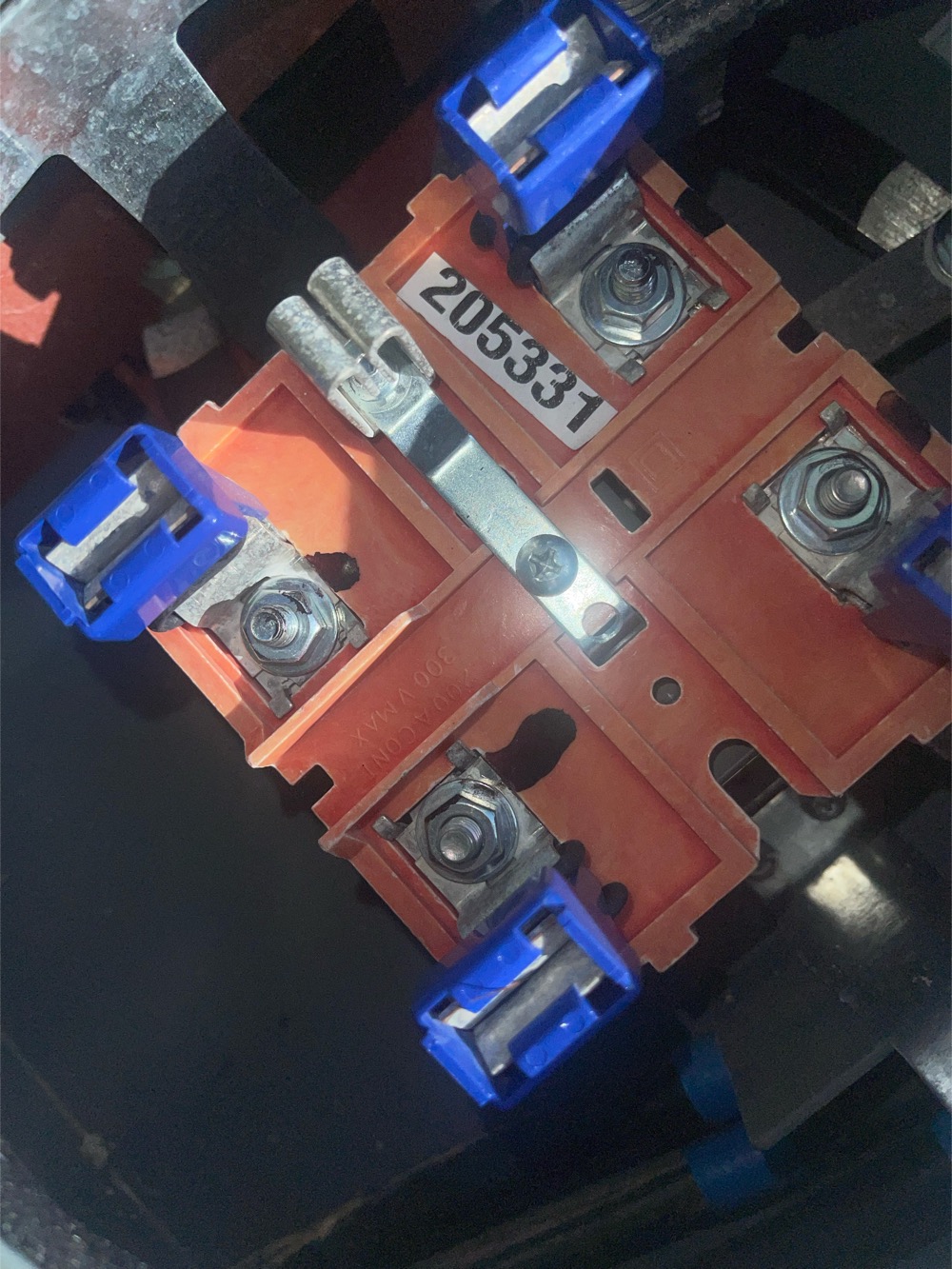 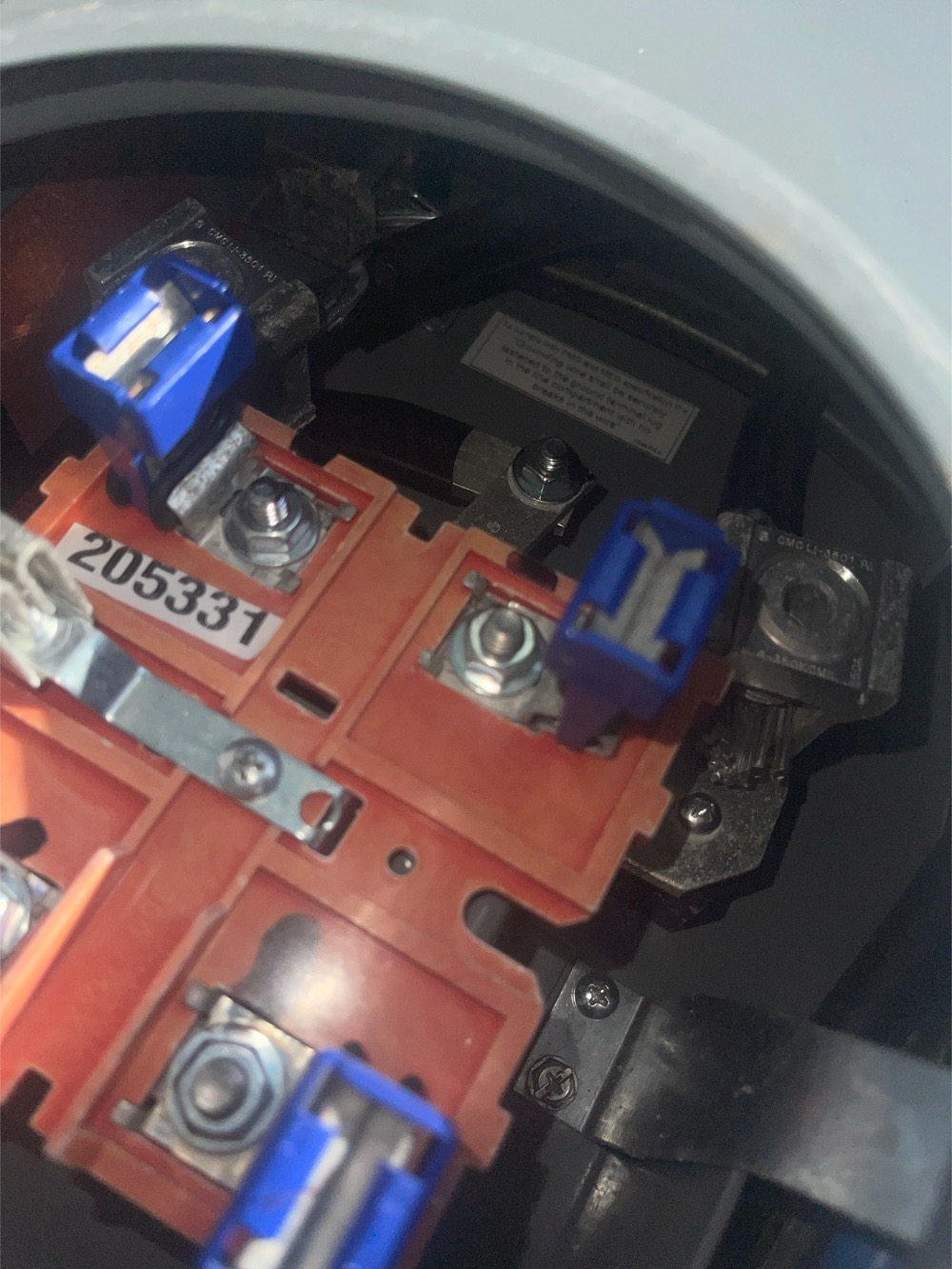 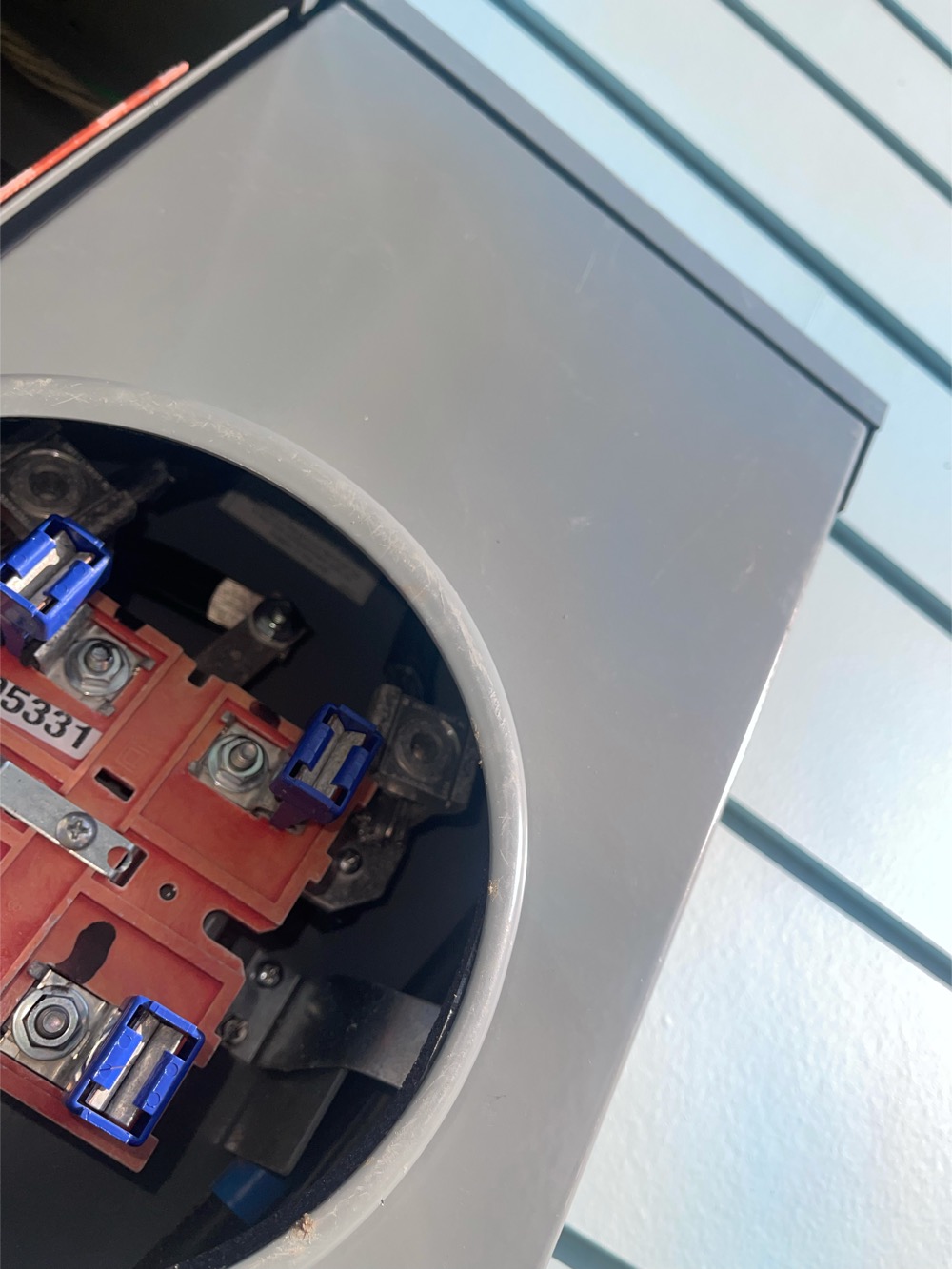 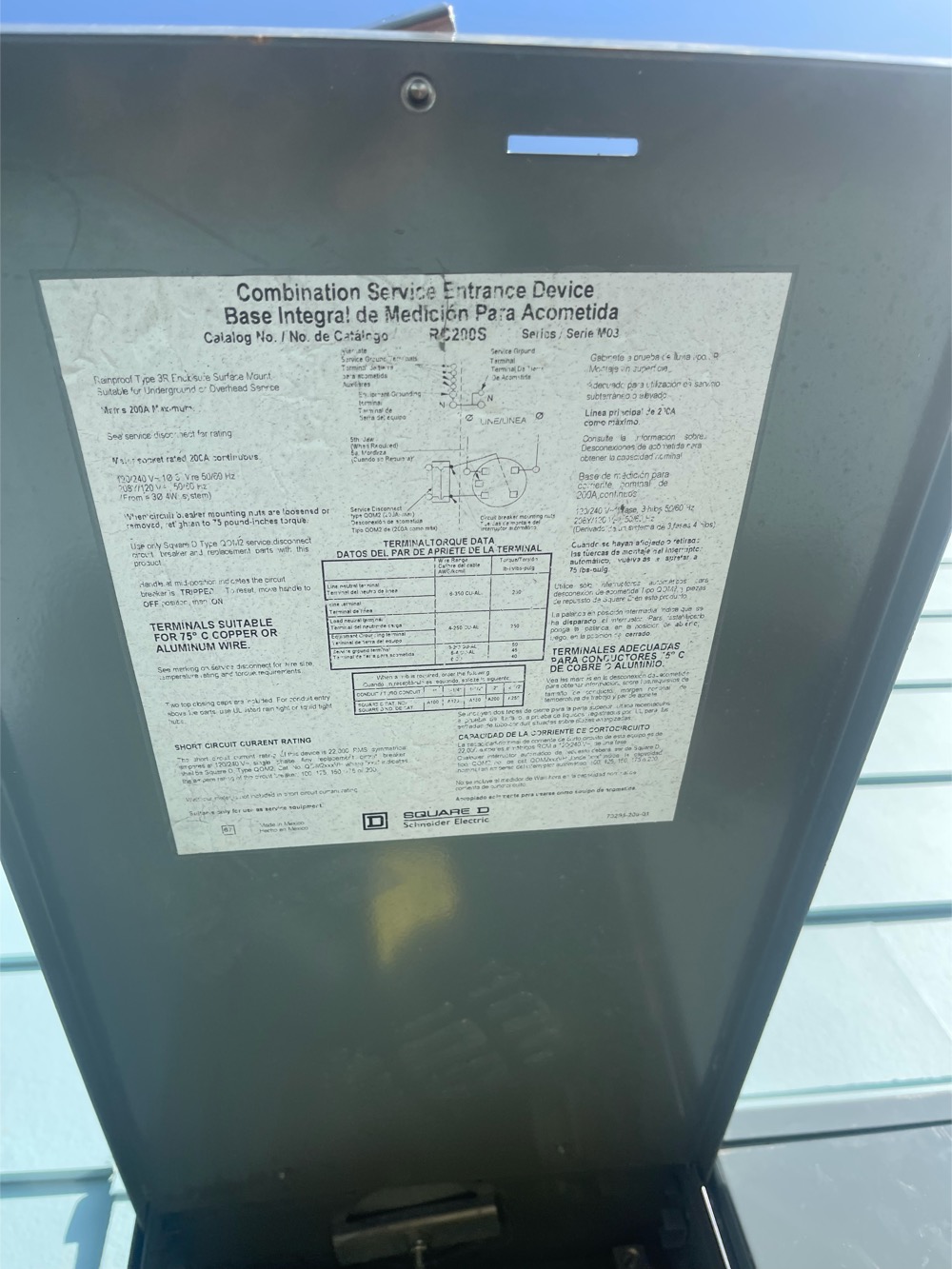 TL;DR Put it in the main subpanel (i.e., in your house)

There are "Meter Mains" that include:

Yours is not like that. It has the meter and the main breaker and a feed to your main panel. And that's it. The ones that include some regular breakers use them to (a) feed one or more subpanels (either in one or multiple buildings), (b) provide an outdoor convenience receptacle, (c) help with generator and/or solar hookup (those can get tricky) and yes, (d) can handle a whole house surge protector. Note that technically this is the main panel (whether it has additional breakers or not) in terms of neutral/ground bonding.

But this panel simply isn't designed that way. While a surge protector would function in this location, I really wouldn't recommend it. There are some real safety issues, and the bottom line is that the box simply isn't built to take anything extra.

Just put the surge protector in the main subpanel (i.e., wherever these big wires end). The good news is that since you have an outside disconnect (the main breaker here) you can work on the inside panel in complete safety. Depending on the surge protector and the panel, it may be designed to go in the top breaker spaces (assuming feed comes in the top) of the panel, or possibly even connect to the main lugs - follow the directions carefully.

The entire gray thing needs to be changed.

Right now you have a "Meter-Main" which has only a meter and main breaker. It has no space for any other circuit breaker.

What you need is a Ranch Panel, which has all of these:

To avoid having to replace the meter box, you could obtain a standalone main-lug panel which has thru lugs. Come off the main breaker over to this main-lug panel. Then go from its thru-lugs, via the meter-main, to your master panel indoors.

Normally you could just "tee" off the 200A main feeder wires, but your goal here is surge suppression.

Or, you could relax about surge suppressor location.

Because I'm only advising this stuff because you want it. I would never go to all the trouble, I would just the surge suppressor(s) into the master panel (the one with all your breakers) and be done with it.

Your aspirations about seamless, protected power

I hear a dizzying array of ever more complicated products - transfer switch, industrial tier UPS, etc. etc. And you don't want to deal with short term power interrupts while these things switch.

And you're going to have a large battery anyway.

Well heck... rather than mess around with all that complexity that will just add complications... why not do a permanent ("Online" this is called in the UPS trade) AC-DC-AC conversion?

When AC power is on, the charger's DC output is both topping up the battery faster than the inverter draws it down. In other words, the charger is "gaining on it".

When AC power fails, the only thing that happens is the battery stops being topped up.

External surges inherently cannot pass through the DC side. Surges are extremely easy to suppress on DC - capacitors will suffice, and the battery is a huge capacitor.

0
Can I add a breaker to outside main disconnect box?

0
How can I install this automatic transfer switch?
3
ADSL + Ethernet Surge Protection. What is chaining?
1
Do type-2 surge protectors render type-3 protectors redundant?
2
How to check if my house is properly grounded?
1
Add electrical generator breaker to service box
2
Whole House Surge Protector connection
3
Is this a correct installation of a whole house Surge Protector?
0
Can I configure home battery power like a UPS - where it constantly self charges and auto transfers?
22
subpanel breaker tripped as well as main breaker - should I be concerned?
0
Can I use a quad breaker to install a whole-house surge protector?