My home's master bathroom has an oversized step-in shower -- two showerheads, frankly over the top. Bathroom exhaust fan does a fine job preventing moisture build-up in the bathroom during even long showers with both showerheads. BUT, moisture lingers in the shower area. Exhaust fan is well outside the shower. I feel the exhaust fan is drawing in external air from the rest of the living space, and exhausting that air out the exhaust fan, without pulling much air from/through the shower.

I have thought about ways to get make-up air (from elsewhere in the house) into the shower area, so that exhaust fan would pull air from the shower area. Broadly, I'd install some kind of grille in the shower, angled so that water drains down but air can come in. Grille would connect to a duct to some other nearby other part of the house. Don't feel great about this because it feels ad hoc, and access is limited behind the shower area. Also prefer not to cut tile, as I don't have any experience working with tile.

I also thought about ways to try to increase circulation in the shower area. I have excellent access from above (attic) so could install any kind of ceiling-mounted fan. Certainly wouldn't want a full ceiling fan. What about a tiny fan (potentially as small as a USB desk fan), mounted to ceiling or wall, controlled by the same switch that turns on the exhaust fan? I'm confident in my ability to mount and wire such a fan. Feel it would help the problem. Nonetheless, I'm hesitant. One, I feel like a code restriction would prohibit or limit such a fan in or around a shower. More than that, I've never heard of anyone doing any such thing. Why not? I can't be the only person with a dead-end shower area needing improved air circulation. 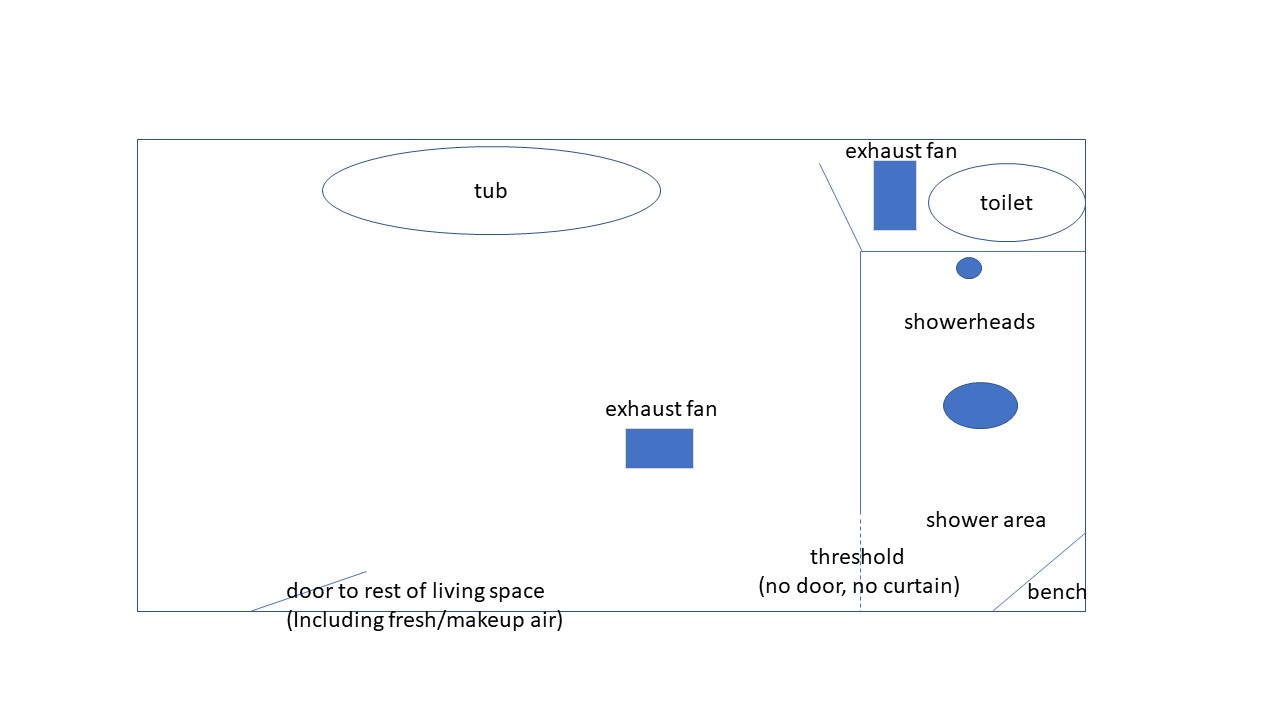 If you can easily approach from above, put another exhaust fan on the ceiling inside your shower. All showers in this house have one. You have 2 exhaust fans already in the bathroom so your new fan could share some of the duct with one of them, or you can cut another hole.

It will pull air thru into the shower and out which is ideal. Also when you go to sell the house there will be no ad-hoc looking DIY stuff in evidence. A shower exhaust vent is not weird.

Looks like you already have two separate exhaust fans. You could try consolidating and adding a vent right above the shower enclosure by installing a powerful enough (i.e., enough CFM) in-line bath fan. You would have 3 ducts feeding into a single fan with one single exhaust duct to the outside. Rigid ducting for greatest efficiency though it may sound louder than flex duct; or maybe use a combination (flex at vents in ceiling to fan, rigid after fan to exhaust port).

There are some companies that will sell the fan as well as a kit for multiple vent ports - the vent grille, the damper to keep out air, wyes for splitting the line.

The exhaust fan for your shower in a bathroom that size should be about 1-2 feet outside the shower. It's just too far away there. I am sure someone theorized that the middle was better but people take more showers than baths and showers produce more steam. The fan is just in the wrong place.

0
renovating a bathroom to add wet room for tub & shower
0
Exhaust fan venting through soffit where attic has no vent
0
ventilating mildew-prone walk-in shower
1
Gravity grille not opening when bathroom fan is on
2
mounting fan/light in very tight enclosed space over shower
1
Why do all shower cubicles have open tops, and does it have to be this way?
0
How should I apply spray foam around a ceiling mounted bathroom exhaust vent?
21
Bathroom exhaust fan without duct
2
Any issues wiring bathroom exhaust fan to low-voltage heated mirror?