How can I disassemble this old bathroom faucet to fix a leak, without damaging the decorative chrome piece?

Update 4: Once I followed Michael's suggestion I was able to remove the cartridge. Closest match was a Moen 1224, 131222. Inlet and outlet were very different, and rotation of valve was much greater on the Moen. But length, diameter, oring location were a match. It dropped in pretty sweet. I reassembled the valve and IT'S FIXED. Pretty good for a 15 to 25 year old faucet. I have been trying to post pics of the old cartridge since last night. No luck with Imgur for now. Thanks for the help!!!!!!

Update 3 and request: So, Michael's suggestion worked like a champ. The quality brass/copper assembly unthreaded easily. Then using the long screw pictured below threaded into the cartridge and a pair of pliers I was able to pull the cartridge from the housing. Now to find a cartridge replacement. Still cannot identify manufacturer. I'm soaking the parts in vinegar and baking soda to maybe reveal a brand. Can anyone recognize the manufacturer of this assembly? I will post additional pics as soon as Imgur is back up.

Update 2: I pulled the assembly out of the sink. Should be easier to work on. I will try Michael Karas'suggestion for wrenching it apart with the slots.

ANYONE RECOGNIZE BRAND OF THIS ASSEMBLY? PROS SUGGESTED IT WAS GERMAN OR ITALIAN. I've checked carefully for brand stamp, but it's not there.

[update - see pics below - I reattached the brass extension to the plastic cartridge in the middle of the valve. I then clamped pliers around the neck of the extension just below the splines as a pry point. I used a pry bar to pry up on the pliers, extension and valve, using the sink as the reaction point. I've pried pretty hard. Anybody have any idea if the cartridge is supposed to just pull or pry up out of the valve?]

I have a 15-25 yr old wide spaced bathroom sink faucet. It has a drip. I've removed the faucet handle. Now below the splined stub for the handle on the top of the valve stem is a heavy looking round cover, approximately 2" diameter hiding everything below the splines for the handle. The cover is round and chromed. I've tried prying the cover up and I've try twisting it off. It's not budging. In both case I've used fairly sophisticated methods and quite a bit of force. I've tried a hammering a very thin, almost knife sharp, pry bar/wedge between the cover and the sink. There is a very small gap between the sink and the cover because either the sink is not perfectly flat there, or the cover is threaded on slightly off perpendicular to the sink. Anyway, prying is not working. I tried twisting the cover off. Because the cover is chromed and round, it is very difficult to grip it without damaging the chrome cover. I've tried rags, electrical tape & cut bike inner tube to protect the chrome with curved pliers and a pipe wrench. I've also tried a leather strap wrench but still not enough grip. I've done some damage to the part. It is stuck pretty solid. Do I have to tear the cover up to get it off? Any other ideas? Is there a special tool for tightly gripping slippery chromed round pieces without doing damage? If you wish I can send pictures. I don't currently have a url where I can save them.
---next day I tightened a hose clamp around the chrome cover to protect it from the pipe wrench. A cheap hose clamp stripped before it would tighten enough not to slip. 2nd hose clamp was top quality stainless and tightened up enough not to slip. Then I was able to turn the hose clamp/cover with the pipe wrench and threaded the cover off. The gaps in the hose clamp for the hose clamp screw still dug in to the chrome, doing some damage. Now I have to figure out how to get the plastic guts (cartridge?) out of the body. It doesn't seem to thread out. I'm trying to pull it out now. I'll try to post some pics. Can anyone tell me what brand of faucet this is and any ideas on getting the guts out of the valve? Thanks. 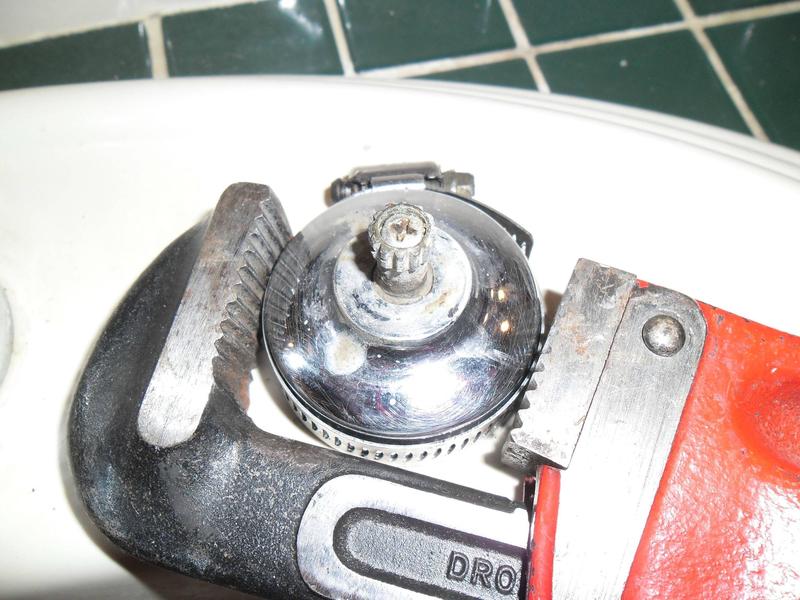 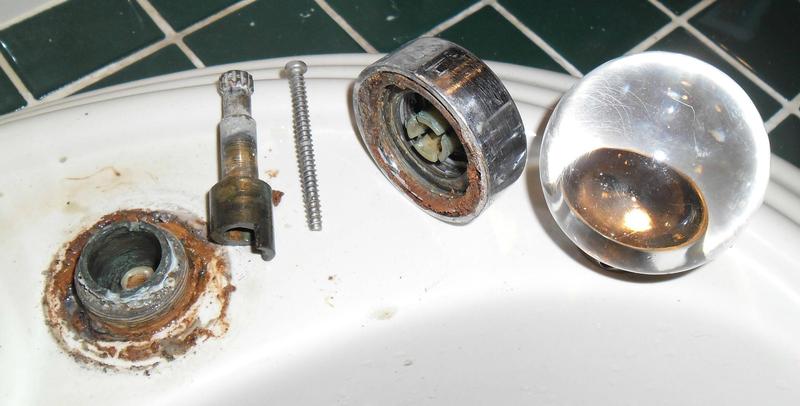 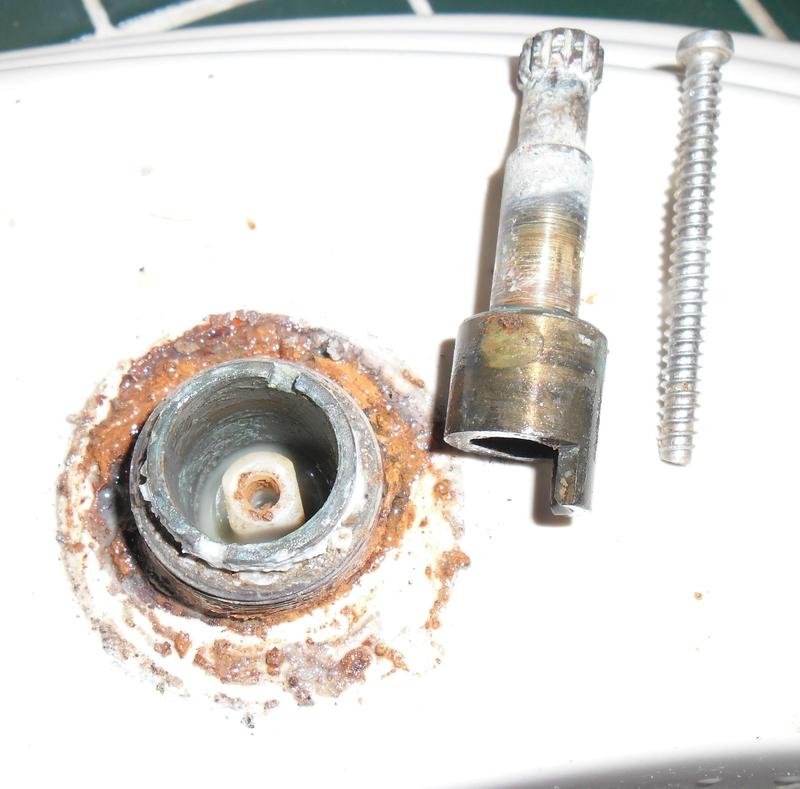 The next step secret to getting more of this faucet apart are the two slots cut across the cupped part. See the arrows in the following picture. 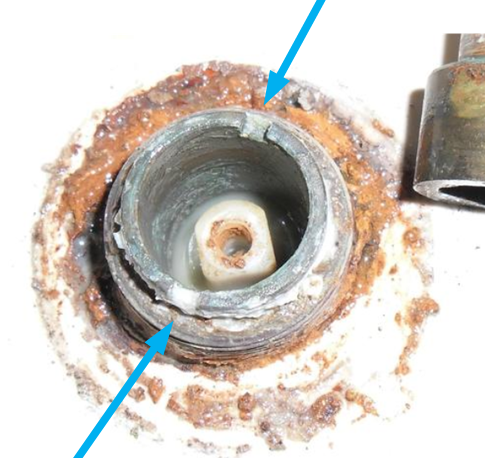 It looks to me as that the cupped part is threaded down inside the larger diameter part that sticks up from the hole in the sink. There is probably a special tool used to engage these slots to thread the part out. It may be possible to lay a piece of metal bar stock across these slots as a tool. If you do that make sure that it has nice square corners.

Not the answer you're looking for? Browse other questions tagged bathroom tools leak faucet or ask your own question.

2
How can I connect a faucet adapter to a non-standard faucet without leaks?
3
How do I remove this old bathroom exhaust fan?
5
How to remove the handles from this faucet
2
How to remove the handle on my Delta faucet?
0
How to remove this bathroom faucet
0
Removing mini wideset handles without set screws or mounting nuts
3
What is this thing that holds widespread bathroom faucet handle to sink? How do I tighten it?
1
What's this piece under the nut on my faucet, and could it be stopping me from loosening the nut?
0
How to fix a slow drip in this exterior faucet?