Is a PTHP an HVAC option for a super or well insulated structure?

Is a Packaged Terminal Heat Pump a good HVAC system for a structure that is super insulated or passively insulated assuming the unit is sized and fitted to meet the needs of the structure.

There is not really much mentioned about PTHP and very well insulated buildings. Every publication out there dealing with well insulated structures seems to be all mini split ductless or small duct high velocity hvac systems. Are PTHPs worth considering in place of the other just mentioned options? Below is a potential list of advantages and disadvantages that I came up with for considering a PTHP system, it seems to have some pretty good advantages. Why are we not seeing more of these in well insulated building projects, am I missing something, sans the larger whole in the wall I would think these units would work well where a mini split wall unit would go? 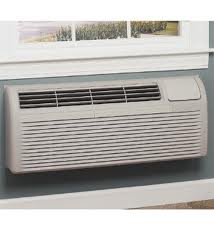 The point of a super insulated home or a Passive house is that they rely on the body heat of the occupants plus the heat from the various gadgets in the home to keep them warm, with the insulation slowing the heat loss. A home built to Passive house standard will usually be fitted with hydronic heating (probably as the new owners are not sure that it will do what it says on the tin.) And the heating may never be used. Of the 37, 000 Passive houses in the world, 20, 000 or so are in Germany where 92% of the owners are satisfied with their economy. A true Passive house is almost air tight, with a heat recovery ventilation system, fitted with a in duct heating coil to warm the incoming cold winter air, should it be 3.5C or more lower than the room temperature. You can see from the above that having a large hole in a wall, albeit sealed with a steel sheet, where a vast amount of heat can escape will defeat the whole point of carefully installed insulation.

After narrowing my focus from PTAC to PTHP I found an answer. PTHP can be a practical option for well insulated structures, it really depends on the intended use and the size of building. For smaller open space plan like offices studios, this kind of system appears to work effectively as noted from some answers on Green Building Advisory to a similar question of Heating a small house with a PTHP

I'm planning on doing this. I only found one other guy who has done it, but he's happy:

"Because the house is so compact and highly insulated, we eliminated the central heating system. The air source heat pump, which is like one found in a hotel room both heats and cools. Heat in the lower level is provided by small baseboards in the bedrooms and an electric heater with a fan in the bathroom.

We tracked the performance of one unit from February 1st 2009 to February 1st 2010. The cost to heat the unit came to $185.24 which averages to $30.87/month or $1.03/day. The square footage of the unit is 1150. A separate meter which tracks electric used by the heaters showed 2795.5 kilowatts used during the six month heating season of mid-October to mid-April."

A small, superinsulated house is a perfect application since the output of a PTHP is 12,000 btuh, and that should match the house pretty well.

What about when the outside temperature is below 25F? PTHPs have backup resistance heat if necessary, but we ran a yearly simulation that showed that resistance heat was needed for only 4 hours for the entire year in a 1200sq.ft. house.

Not the answer you're looking for? Browse other questions tagged insulation hvac heat-pump ductless or ask your own question.

4
Are there any ductless mini split systems that offer standard HVAC wiring controls?
2
Will a single ductless mini-split heat pump be able to distribute its air evenly throughout my ranch house?
2
Will a 2-stage heat pump cool my upstairs on low stage?
0
Sanity check mini split layout for old brick house
1
Can ductless air conditioning+heat pumps work well on floors that have doors closed?
2
Is it OK to stop the indoor blower during heat pump defrost on split-system heat pumps?