One of my home's 120v circuits measures:

What should I look for to resolve this issue?

Open ground somewhere. Digital multimeters are very sensitive and the tiniest of leaks can mislead you. Best to put some sort of small load (like a 25 watt incandescent light bulb, NOT LED) across the line to ground and ground to neutral...separately of course and see what happens. To be fully safe, you'd need to buy a 3 prong (grounded) plug, some wire and connect it to a bulb socket, one time from line to ground for the first test, then ground to neutral. I'd be really surprised if the bulb lit up at all. Most likely the voltage across the bulb will drop to nearly zero in both tests. Phantom, induced voltages are common when there are loose or missing connections and can be very misleading. If the bulb didn't light up and the voltage dropped to close to zero during your tests, all you can do is check every device (outlets, switches and fixtures) on that circuit for a disconnected ground wire. If the bulb lights up, I don't have a clue what your problem is!

It's a side effect of DVMs (which includes most cheap meters). They're so sensitive (so high impedance) that they see "float voltages" on entirely disconnected wires, which are merely from capacitive coupling of nearby wires. There is no current behind them.

Any actual load will tamp down that phantom voltage. With 120V/230V you don't want to fool around with putting resistors across test leads, so stick to plug-in loads. Most of those only load hot-neutral... but a common, cheap 3-light tester will place loads across all 3 sides. 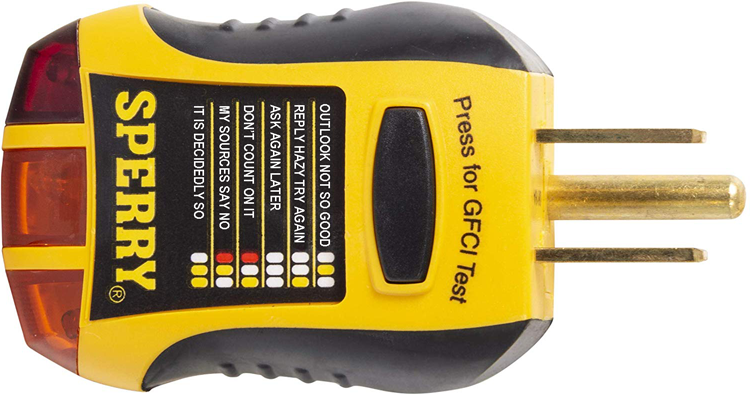 On most of these, the 3 lights are marvelous, but I call them "magic 8-ball" testers because the label explanations are misleading and waste hours of your time. (they're tuned for wiring errors in new construction, not wiring failures). This one has a less misleading label.

look for loose/broken connections, it may be located at a different point in the circuit than the receptacle you are looking at. Also make sure there is nothing else plugged in anywhere else on the same circuit when you are checking voltage, that can rule out a faulty appliance causing the issue.

If the problem goes away when nothing is plugged in then the wiring is likely fine and something that is plugged in is at fault. I would go this route first as it is easier than ripping everything apart.

As long as you're checking voltage, the next logical step is to simply remove the outlet cover, visually inspect the connections, and test the voltage on the screws. When finished, you can safely reset the cover. I believe this is much more likely to reveal potential causes of any problem than by fooling around with lamps and grounded loads.

Not the answer you're looking for? Browse other questions tagged voltage or ask your own question.

2
Voltage in incomplete circuit
8
Why does one phase of my buildings mains line show a significant amount of voltage (~60V) when it goes down?
1
What explains a sudden voltage drop to laundry room?
1
Temporary (multi-hour) voltage drop that seems instigated by running an appliance?
2
How do I convert an old Satchwell/Sunvic TLX2203 thermostat wiring to line voltage wiring?
5
If using an old 240v cable to make two 120v circuits, is there a risk of overheating the shared neutral return?
0
Voltage live to neutral low
0
Measuring AC Voltage Behind Light Switch
0
Voltage detector beeps on the sides of smart dimmer switch after installation