Filling gap between side wall and lowered staircase

I demolished the old concrete staircase going to my basement from the street planning to lower it approximately one step below to match the basement level, which I dug out a foot some years ago. The stairs were (and the new ones will be) supported by brick walls on each side. Before I demolished the old stairs, I was hoping that the brick walls went below the old concrete level so that I could just set a new form one foot below the old and still have bricks to lean against.

However, it turned out that the original builders did minimal amount to work, not planning for possible lowering of the stairs so their base line of the bricks pretty much just followed the level of the stairs. That can be seen in this picture, in which the reverse stringer form shows where the level of the new concrete should be. 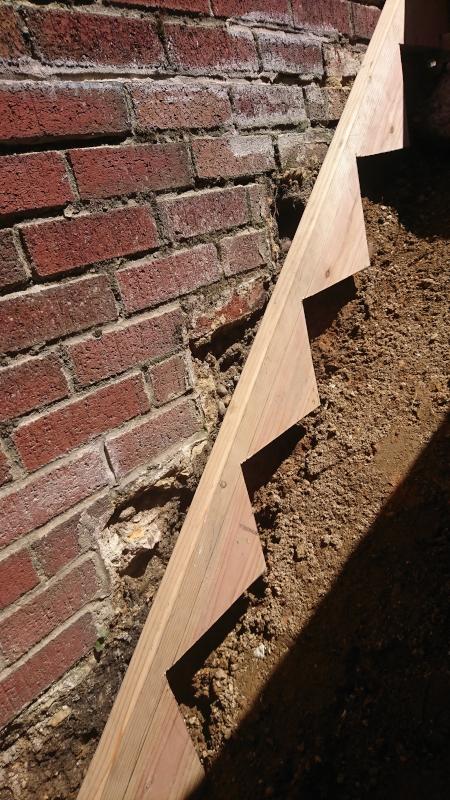 Obviously, I can't leave the dirt in between the new stairs and the brick base line. Laying bricks would be very awkward under the existing wall, which is now supported only by dirt and whatever adhesion the old mortar provides (not much probably so I am in a hurry to underpin it for support and not risk another couple of rain showers eroding support).

I am sure I am not the first to encounter this scenario. What should I do? Extending bricks would be awkward because I would have to work against gravity, starting with the top added layer. Is there a way to set a piece of plywood over the gap, after excavating the dirt,and then somehow inject concrete?

If I understand correctly, my suggestion is pictorially shown below. You will need to fill the concrete-brick gap, after the concrete has hardened, with grout or by dry-pack. 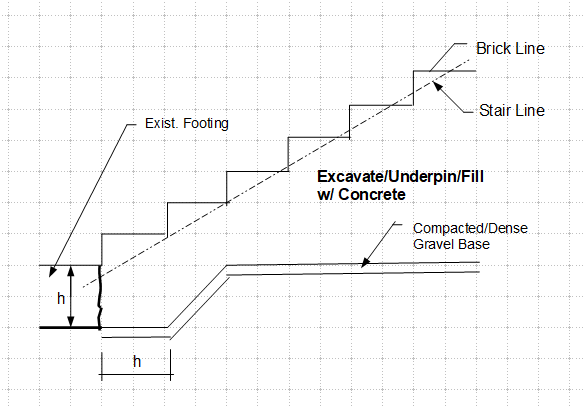 You may consider making stepped excavation to save concrete.

Not the answer you're looking for? Browse other questions tagged concrete brick masonry or ask your own question.

2
How to fix broken brick staircase?
2
Can I use Quikrete FastSet Repair Mortar to replace the mortar between stones in a fireplace hearth support?
3
How to repair / reinforce deteriorated footings and subsoil below brick & concrete porch
1
Should I leave gap between my house's slab and a new one I'm laying outside in the garden?
2
Filling gaps between bricks in pool deck
0
How to build an additional concrete/cinder block wall in basement, where the crawl space and basement meet
0
Small gap underneath garage's concrete slab on one side that needs to be filled
1
Concrete floor brick wall gap leaking severely (garage above basement)
5
Rebar for small basement stairs supported by wall on both sides