Final Edit: The problem was NOT fixed by exhausting every reasonable suggestion in this thread. I have found new information and created a new thread as the question needs to evolve from this discussion in order for an answer to be found. The new question is here: Microwave on A leg causes B leg voltage to increase, neutral issue, but how to diagnose?

I have a very troubling issue with my LED lights that so far two qualified electricians AND the power utility have not been able to uncover. I have been working on this for 1 month (hours of research) and we're no closer than when we started.

The issue is this: All LEDs in my brand new house (built April 2021) that contain circuit boards, or are run off a LED driver (does not affect simple LED bulbs plugged into conventional light sockets) begin to strobe at a regular interval after they are switched on. 44-55 seconds from flicking the switch the light will strobe for 5 seconds and then go back to normal.

The lights do not strobe at the same time, the countdown to strobing begins when each light circuit is switched on. This is stumping us as it would be much easier to identify the issue if all the lights strobed at the same time (suggesting a central supply issue). But that's not the case.

Edit: I was wrong, the lights did strobe all at the same time. It was very hard to tell this was the case, but if you have this issue, this is the biggest hint as to what the issue is. So try to have a friend help you by yelling out across the house when they see the lights flicker while you're in another room with flickering lights.

Morever, this is NOT your typical dimmer switch issue, I've spent 20 hours on this so far and eliminated the following COMMON causes:

And finally: turning off all breakers, except for a strobing light circuit, does not change the behaviour, the lights will strobe even if they are the only circuit on in the entire panel. :(

The ONLY tell I have right now, which hopefully means something to someone, is if I flick off two breakers for my wall outlets (which contain GCFIs if that matters) and then flick them back on, two circuits will stop strobing completely for at least 4 hours. No electrician can explain this, but the behaviour has been observed true 3 times now.

TL;DR - 4 different types of LEDs with integrated circuitry strobe at regular intervals on 4 different circuits. Common culprits have all been checked. When two breakers are turned off, strobing on two circuits ceases for at least 4 hours. What is this indicitave of?

Update 2: Electrician combined the 4 light circuits into 2, this caused the strobing to cease for 13 hours, the strobing has returned exactly like before. We can eliminate the lights as an issue, they worked fine for 13 hours. As well, central power delivery can't be the issue given the same finding.. I wonder if it's the panel itself. 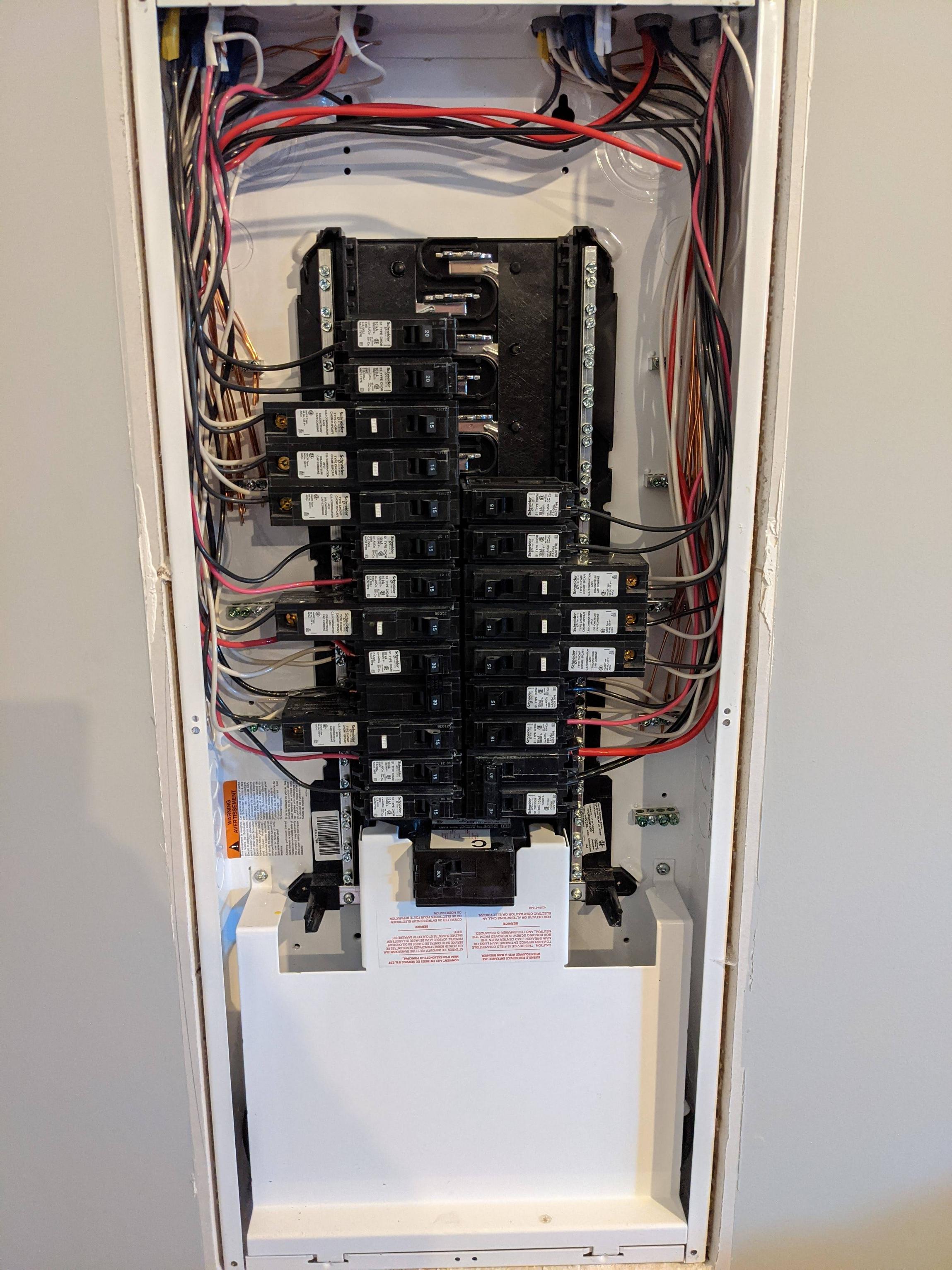 For anyone who experiences this in the future, if you have multiple different LED lightbulbs/fixtures strobing on different circuits, check your input voltage from the power company. If it's around 114 or lower you may have the issue I had, which is being too far from the nearest transformer.

I had the power company come out on 4 seperate occassions, they had to install a power quality meter to catch the low voltage. The first 3 visits with voltmeters did not catch the true problem, so be persistent!

This issue was fixed by the power company installing a new 50kVA transformer right on the pole outside my house and connecting my power to this. I was about 78 meters from the nearest transformer and that was causing my voltage to go as low as 106 inside the house. Now, I have 122 - 119 volts all day long and zero flickering.

Edit: The issue was low voltage but more specifically the voltage fluctations caused by the low voltage. The house would read 118 momentarily, but if any load was put on it would drop very fast to the worst I saw which was 106!

EDIT: It is with an EXTREMELY heavy heart that I say the flickering has returned. I've been studying this and opened a new question as this one is getting bloated: Microwave on A leg causes B leg voltage to increase, neutral issue, but how to diagnose? I am very discouraged, but I hope this new question provides new insights into the issue. Thanks everyone for playing along with me. :)

Is the photo you posted before or after the electrician changed it. If it is after you have some big issues. This is what is called an Edison circuit (2 hots sharing a neutral) and the wiring being that way is likely the root cause of the strobing effect you are seeing. Try turning off the red leg to both and see if the flickering stops. You have another issue in the panel as well, for a 2 wire shared neutral circuit, the breaker MUST be bonded so if one side trips the other trips as well. Edit: by bonded I mean the handles, or a single handle 2 pole breaker

I second with Gil, plug something that is a reasonable load in to the circuit and see if it is strobing too, if its not then I would start looking for either a crazy amount of noise on the lines or more likely bad fixtures right out of the box.

I can't comment - so you get an answer. I agree with Matt's comment. It's amazing how many different brands use the same source for their products and then just make some minor cosmetic changes. This is very true in the smart lighting industry as well.

The one commonality you mention is that the lights in question have a circuit board. Are these smart devices? IAC, as Matt suggested, if the boards call came from the same supplier, then something could be interacting with the boards.

Others here know much more than I, but possible interferences could be hacked circuitry, a device in your house that sends a signal that is misinterpreted by the boards, or even some outside source.

While I doubt it's part of the problem, I would also check the line voltage, both once the lights are turned on and then again, when they start to flash.

If any of the lights are easy to remove, then consider taking one out and having an electrician try it back at their office.

Also check to see if you have neighbors with antennas (short wave or otherwise) that might be broadcasting.

Turns out the issue was in the panel. There were 4 circuits and we combined these into two circuits and the problem was solved!

See the attached picture, the electrician said we converted the circuit from a 3-wire breaker to a 1-wire breaker if I get his terminology correct. So as you see in the picture the two circled breakers were combined as one on both sides leaving two light circuits instead of 4.

This is a before picture, the red wires on both sides circled were combined with the black wires to form two circuits from the circled four breakers. After picture incoming soon.

Update: Unfortunately after 13 hours the strobing came back on all circuits. SO, now the whole panel is mimicing the behaviour I found when I flicked off the two breakers (eleviating the strobing for hours). Something must be building up in the panel and disconnecting the breakers is fixing this build up.

Not the answer you're looking for? Browse other questions tagged electrical wiring lighting led or ask your own question.

5
Microwave on A leg causes B leg voltage to increase, neutral issue, but how to diagnose?

6
LED lights delayed when turned on
1
Retrofit a ceiling light with RGB LED tape/lights?
1
Replacing LED lights with LED lights but 2 out of 5 has issues
1
GE dimmer works with 3 LED lights, somewhat with 4 and not at all with 5
0
Lights goes completely out and back on again and flashes for more than 20 seconds
0
Integrated LED sconce turns on and then immediately turns off
1
Dimmer burned and the breaker tripping on an existing LED circuit
0
T8 LEDs started working intermittantly after three months of working reliably