I'm working on a DIY bathroom remodel and wanted to get your opinion on best way to proceed. First, see the pictures below. 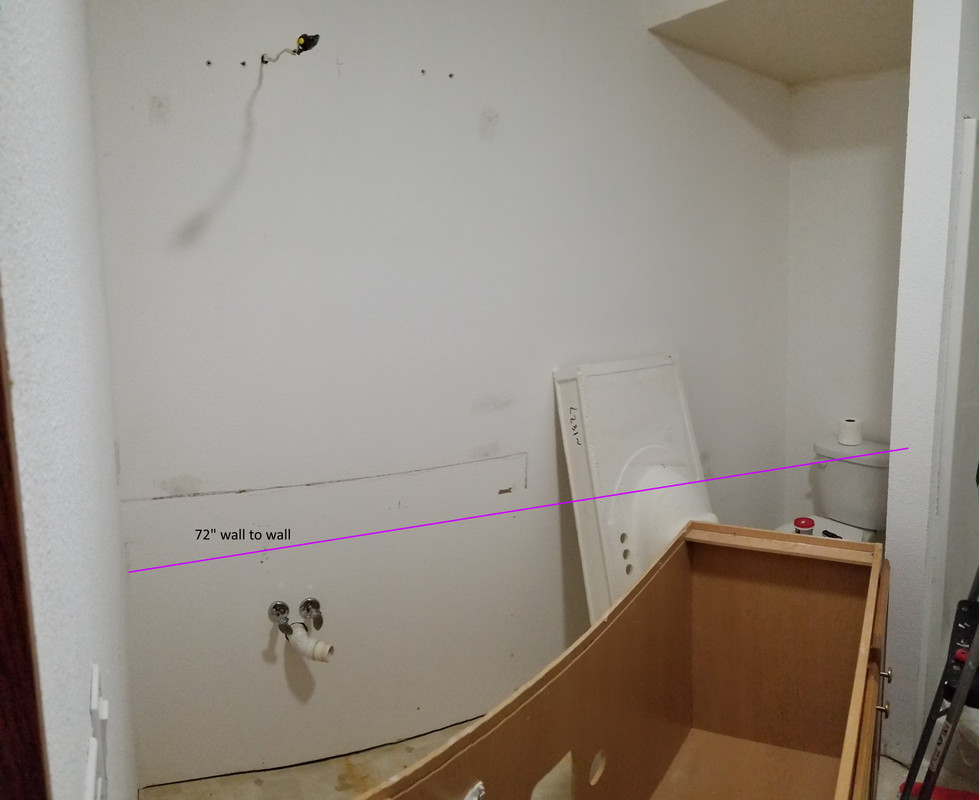 The 72" wall to wall is wall to that stud in front of the toilet.

The previous owners installed a 48" vanity and put the plumbing through at about 19" from the side wall. As you can see in the 2nd picture, they cut out part of the back of the vanity to get the plumbing through since 48" wasn't going to center there. Not only that, but they didn't install a light box for the vanity light power and just...pulled it on through and hooked it up. So that's awesome. It was hiding behind the vanity light and pulled over so it was also centered.

There is a stud directly to the left of the vanity light wire from what I'm able to tell, so I am sure I can cut in and install a mountable light box there for the smaller box mount vanity lights. That means that if I center the light there, I'd want to center the vanity there as well. So I'm trying to determine what to do here, because really then my only choice seems to be a 30ish" vanity, which seems small given the size of the room. if I did a 36" vanity, I wouldn't be able to have it centered enough to the left against the wall.

Another option would be to have a "remodel" light box installed further to the right, but then I can't hang a vanity light from that, right? I don't believe they're supposed to be weight bearing. So then am I limited to vanity lights that have bracket supports, meaning the back has a plate? And even then, I would have to also cut something out of the back of the next vanity to get the plumbing through since it wouldn't be centered, right?

Or should I try and toe-nail a board in and mount a pancake box?

It just seems that I'm in a pickle here, and my wife and I are trying to determine the next best step. Open to opinions and suggestions!

Generally, you wouldn't want to hang a light fixture from a remodel box. I've done it, but I had a certain confidence level based on the weight of the light and my knowledge of the structure behind the wall.

If you don't have that confidence, you should open up the drywall and install horizontal 2x4 strapping, toe-nailed as you have described, and attach the box to that 2x4.

One solution: Get a different fixture. It is quite common to let the wire hang out for a vanity light because many vanity lights do not require a junction box in the wall. They are the ones that are built with what is essentially a large junction box. I am not saying that you had a proper fixture before, but you can purchase a fixture that does not require a junction box. Imagine a vanity fixture that has a pretty box attached to the wall with lights attached to it. It's very common.

Another solution: Get a junction box which goes directly over a stud. Yes, they exist. They are sold for the purposes of hanging a ceiling fan which needs a lot of support and directly attaching to a stud right in the middle of the box is strong. The box is "U" shaped to go over a stud.

Another solution: Very shallow round junction boxes for light fixtures are easily purchasable. I hate them because they are so shallow, but they can be bolted off-center to the existing stud and given only one 14 gauge wire in and one light fixture, they work fine.

Do not move plumbing for a light fixture. It is easy to move a wire and many boxes are available. Spend some time in the electrical aisle checking out all your options. Bear in mind that cutting away at a stud until the box will fit is much easier that moving a pipe. The stud itself is not your enemy, it is your friend because it is something strong to attach to.

Whatever you do, do not bury a junction so that it becomes inaccessible. A nice big fixture can cover a nice big fudge.

Not the answer you're looking for? Browse other questions tagged electrical bathroom light-fixture vanity or ask your own question.

0
How can I add two bathroom receptacles behind and above a vanity?
2
How can I replace a long double vanity with two single vanities?
3
How-to wire a Fan/Light in Bathroom with power at Switch box and Fan/Light box
4
Bathroom vanity light with no junction box
4
Old Work Box for Vanity Light?
1
Vanity light installation using an old work box
1
How to install vanity light - wall box has 2 white, 2 red, 2 black, 2 ground wires
1
Installing fixture with no junction box and off-center stud