What does "can't mix neutrals" mean, and how would neutrals get mixed?

Electrician told me a problem I was having was caused by a new arc fault breaker they installed.

I was told you, "can't mix neutrals"

Can you describe what that means? How would these neutrals get mixed?

Somewhere in your house (or possibly multiple somewheres) there's a box where this is happening: 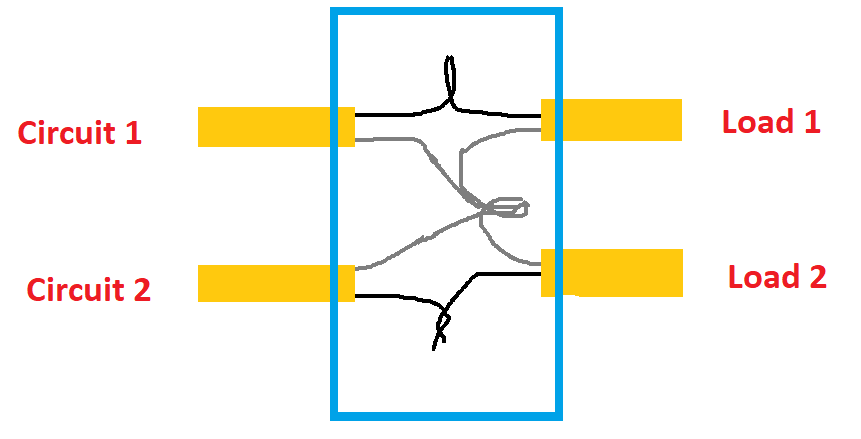 There are two cables coming in from the circuit panel. Each cable has a neutral and hot. When the loads were connected to those cables, the neutral from one cable was inadvertently connected to the hot from the other cable (through the load, that is -- if it was directly connected, that'd be a different problem).

This is going to be the challenge. One possible method to find the offending box(es):

Ground wires are all connected to each other in a big web. That is fine, since grounds do not flow current except during (momentary) fault conditions.

Many people think "Oh, neutral wires are the same, whatever". No. Neutral is not ground. Neutral is the normal return current path, and it carries the same current as the hot(s).

So being careless with neutral is a pretty big deal. A crossed neutral could end up carrying 30A of current on a 15A wire. Not good!

The only way to avoid overloading neutral is to make sure it ONLY returns current for its partner hot(s).

Wait, what, hots plural? Yeah, because of how split-phase power works. Like the power to your house - if you have 43A on one hot wire, and 41A on the other hot wire, the neutral is only flowing 2 amps (the difference). Even if one was 100A and the other was 0A, the neutral would still only be 100A. So, the same deal works with multi-wire branch circuits (MWBC) if they are phased correctly.

So neutral must be monogamous

(Or bigamous in the case of a MWBC). The neutral must serve ONLY loads served by its partner hot wire(s).

So far, everything I've talked about is simply required for safety. We haven't gotten into GFCIs yet (Ground Fault Current Interruptors)

GFCIs operate by comparing current on the hot(s) to current on the neutral. As long as those currents are equal and opposite, everything is OK. An imbalance of current means current could be leaking out via a third path e.g. by shocking a human!

However, if a promiscuous neutral is taking hot current from another circuit, currents will not be equal and opposite, and the GFCI will trip! So, GFCI devices enforce neutral monogamy - i.e. force you to do what you should've been doing all along.

Most AFCIs use "GFCI style detection"

AFCIs must detect hot-ground and neutral-ground arc faults. As it happens, those are also ground faults. So the cheapest way to detect them is have a weak GFCI inside the AFCI.

Thus, most AFCIs behave like GFCIs when it comes to ground faults and promiscuous neutrals. You can identify AFCIs that work like this because they require you to attach the neutral wire to the AFCI.

Mixed neutrals are when the neutral wires on two different circuits are tied together somewhere.

For example, a bedroom can have outlets on one circuit, and ceiling lights on a different circuit. The switch by the door can have a switch for the outlet, and a switch for the light. If the neutrals in that box are connected together, that's a shared neutral.

AFCI and GFCI breakers to operate they need to have the exact current flowing out the hot and returning on the neutral or in the case of a two pole breaker it needs for the neutral to only carry the imbalance.

Your likely problem is that in some junction box you have two separate circuits, like in a kitchen a box has a receptacle and light circuit. Somebody crossed the neutrals or joined the neutrals together.

The most common way to get neturals mixed is to connect them all together in an outlet box or something similar. The breaker monitors the current in only one circuit. It measures the current in both the hot and neutral and if there is an imbalance above a given amount it trips. GFCIs also do this. If current from another circuit goes through this it will cause it to unbalance and trip or if current from the circuit is shunted away it will cause an unbalance and cause it to trip. It also monitors the noise on the line and determines if there is an arc on the circuit. This is a complicated process originally done with digital signal processors. Brush type motors (brushes spark) would cause them to trip especially on older designs. For these to operate properly only the circuit being monitored can go through the breaker, any other will cause an imbalance creating immediate and or nuisance tripping.

4
Can neutrals be tied together on different circuits?
15
What is a multiwire branch circuit?

2
What does the latch position of a circuit breaker mean?
3
Does it matter if I mix neutrals and grounds in the main panel?
2
New install: What's causing a tripping arc fault breaker?
5
What does "Split" label mean on circuit breaker panel?
0
NEC 2016 AFCI question
1
What would happen if ground and neutral got mixed up in an outlet?
1
Dedicated 20 amp outlet tripped twice
17
Bosch Drawer Microwave causes ARC Faults
0
GFCI Circuit Breaker won't reset after construction