Why did the dryer stop working shortly after moving and changing cord to four prong?

I have a Whirlpool LER7646EQ2 dryer. We moved recently and I had to change the cord from three prong to four prong to match the new outlet. It seemed to heat at first, but then four hours later I checked and the dryer was still spinning but not producing any heat. The timer wasn't moving. I checked and the timer works on timed dry but not on auto.

Anyone know what could cause this? I read someone say that if the dryer hose is too kinked, it might overheat and cut the heat. The space behind the heater is tight and I've included a picture of the hose back there. Or could I have wired it wrong? It heated at first and partially dried my clothes. I'll add a picture of the wiring as well.

I checked the breaker, and there's a single circuit breaker for the dryer which was not flipped off. 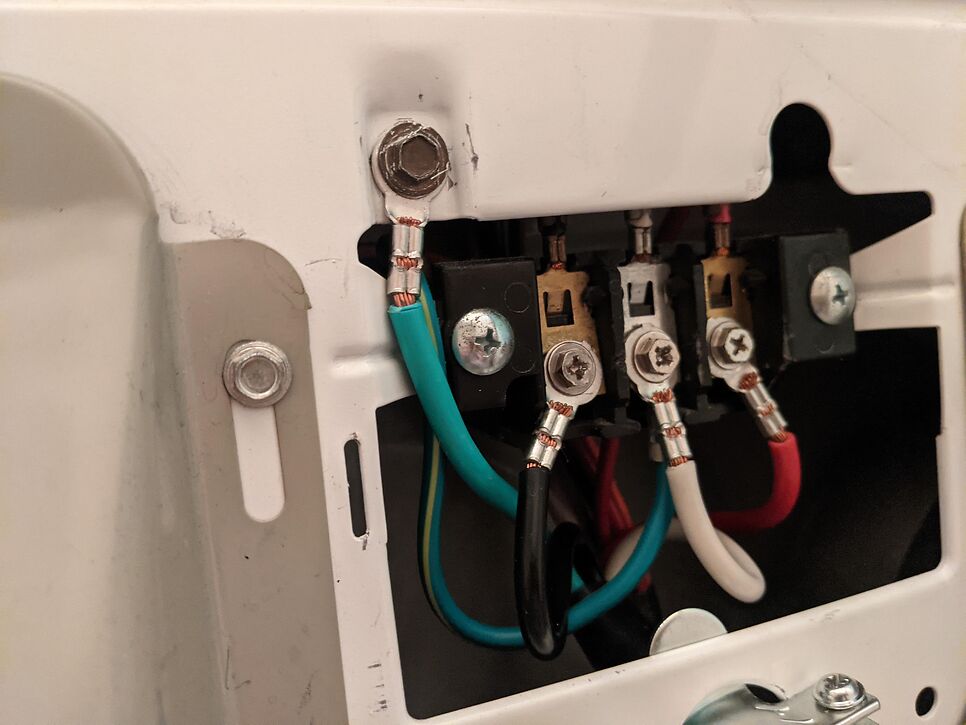 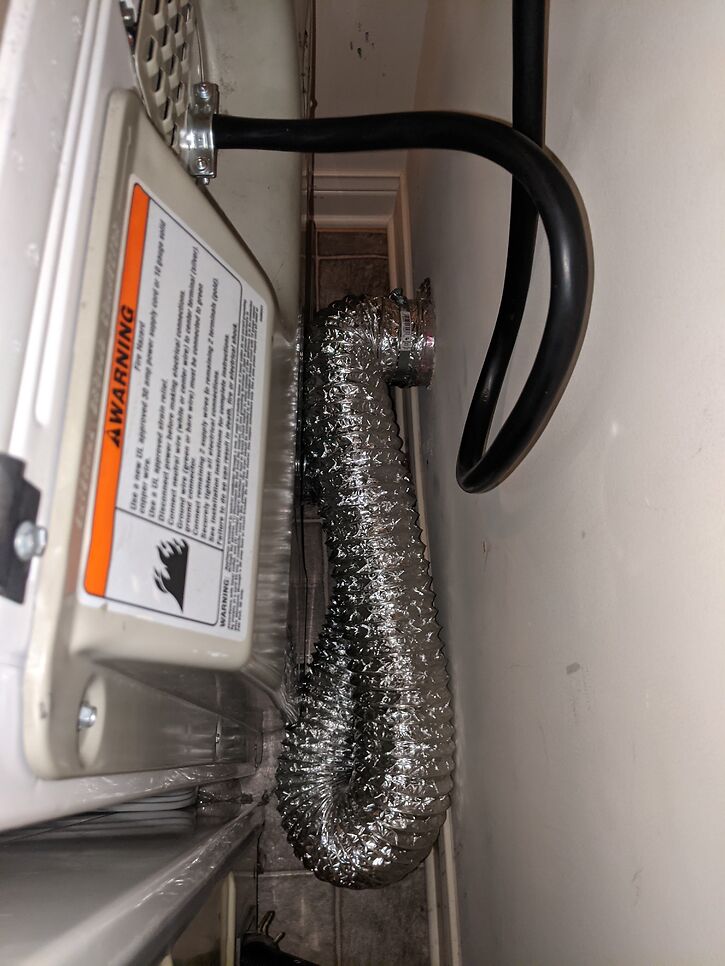 Edit: I've used a multimeter and got continuity at the thermal fuse, operating thermostat, thermal cut-off, high limit thermostat, and the heating element gave 8 or 9 (K?) Ohms. The reading on the two live terminals was over 240 volts. There's also continuity on the timer. I can't think of anything else except a broken heating element.

Edit2: I took off the heating element and I found this: 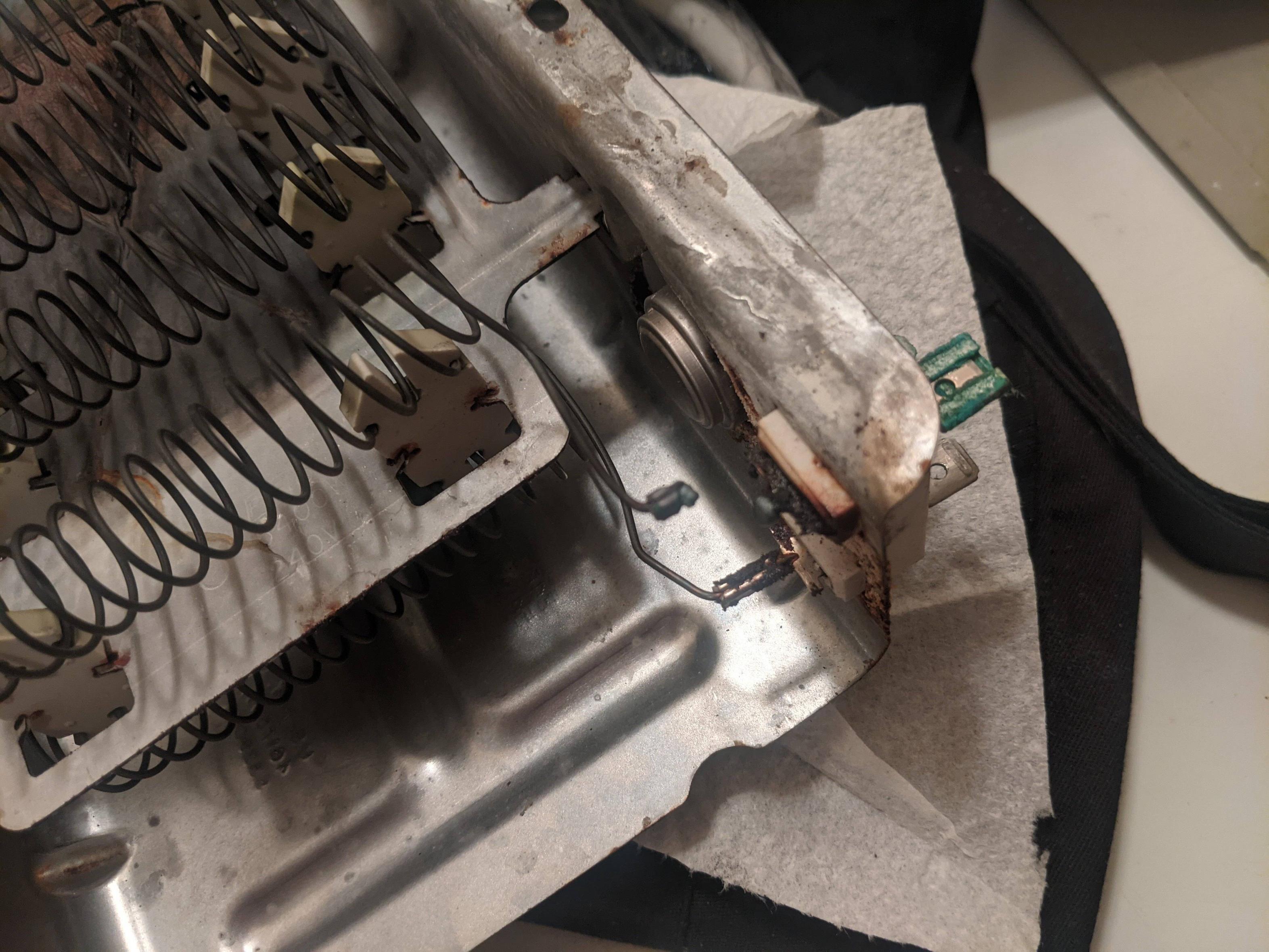 I'll probably try soldering it back together. Looks like it was soldered before and maybe the move jostled it.

Edit3: Soldering didn't work. I don't know if our soldering iron wasn't strong enough. I couldn't heat the metal enough to melt solder. It felt like the metal coils are coated in something, so maybe that kept it from working. Or maybe we just don't know how to solder properly.

Anyway, we ordered a new heating coil that comes with all the fuses too, just in case those are bad as well.

Your vent hose routing is problematic; you have 360 degrees worth of tight bends. Even if this isn't root cause for the heat cutting out, you should fix it.

If you pull the washing machine away from the wall but leave the dryer in place, it will give you an area to work such that you can install a minimum-length duct on the dryer.

I recommend a Dryer Vent Periscope for your application; you can pick them up from home improvement stores or online. They have an adjustment range, so measure the distance between the port on the dryer and the vent on the wall before you go shopping. 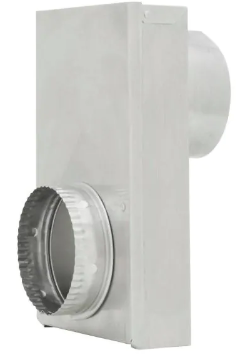 I am retracting this answer. I found generic Whirlpool dryer instructions here: https://www.whirlpool.com/content/dam/global/documents/201603/installation-instructions-W10848818-RevA.pdf and on page 12, the instructions clearly show doing what the OP did, connect the internal jumper to the neutral terminal.

In my own defense, I cannot imagine why the manufacturer would have used a green-yellow wire as a neutral wire when green-yellow should only be used for ground.

Not the answer you're looking for? Browse other questions tagged repair dryer or ask your own question.

2
Why did my dryer shut off in the middle of drying a load?
2
Is a 4 Ohm reading on a dryer heating element bad?
2
test if dryer motor is broken
0
Kenmore Dryer Won't Heat
3
Why do the wires to my dryer's thermostat keep burning off?
1
Clothes Dryer Stops Heating
1
Laundry dryer's thermal fuse keeps blowing off every few months. What could be the cause?
1
Dryer Thermal Fuse Keeps Blowing