I'm scratching my head trying to figure out an odd wiring situation and need some advice on what to do next (if any any).

There's a GFCI outlet in the kids bathroom where one socket doesn't work sometimes. I had been putting off replacing it for a while and finally got around to it today.

Before taking anything out I pushed the test button and the breaker tripped immediately. Strange, that should not happen. I saw two breakers (let's call them #4 and #6) had tripped. My house has multi-wire branch circuits (MWBC), so not too surprising that two would pop.

I turned both breakers back on, and my outlet tester showed both of them working. OK, weird - I was expecting the bottom outlet to not work. I tried the test button again, and both breakers tripped again. I figured it was just a faulty GFCI outlet and both circuits tripping was a result of the MWBC setup.

I removed the old outlet and found a small crack on the plastic, but the device seemed fine otherwise other than it's age. 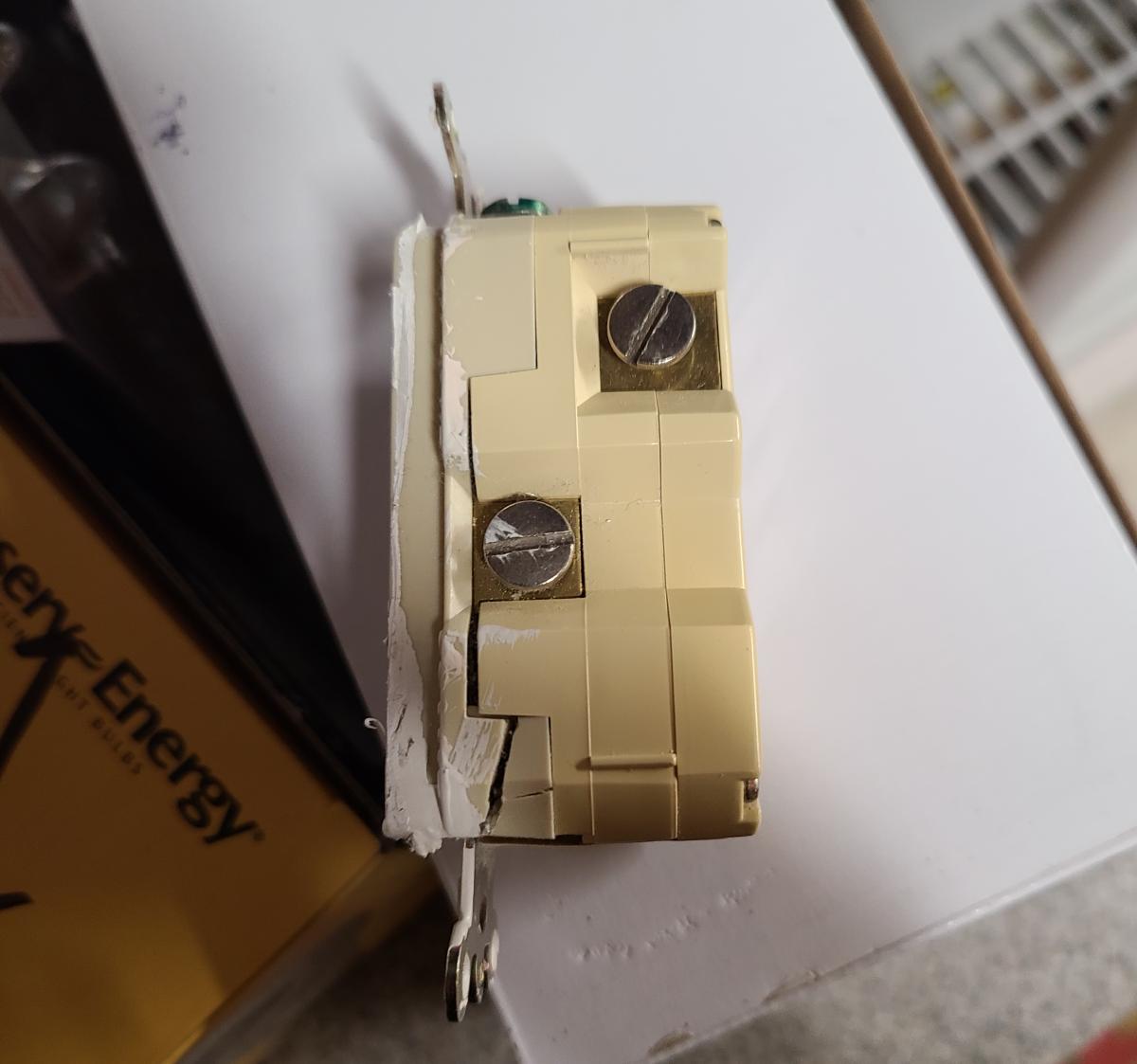 The box had only two 2-wire cables in it (yay). One was wired to "line" and other to "load" on the old outlet. Both ground wires were tied and wired to the outlet. I copied the old configuration and wired the new outlet and turned the breakers back on thinking I was done.

My outlet tester did not come on for either socket. I went through the troubleshooting steps on the new outlet and saw that the fault LED was white and the reset switch was not depressed. This indicated that the line and load were flipped according to the manual.

WTF? This doesn't make any sense. Why would anyone do this? Also, breaker #6 has been a mystery and I have not yet figured out it's purpose to date.

Out of ideas, I wired the new outlet to breaker #4, capped and taped wires from breaker #6 and put the outlet back in to the box. I've turned off breaker #6 for now.

I need some advice and questions and would really appreciate some help from the crew here. Thanks in advance.

Background about the house: It was built in 1980 and has been re-modelled 2 or 3 times (I don't have the history). I've been here a few years and am embarrassed I did not fix this sooner. One other oddity is that the other lights and outlet in this bathroom is wired to a different breaker. I've found a bunch of clowny wiring throughout the house - ungrounded garbage disposal, lights in different rooms wired to same switch etc. There's more info about my panel in a previous thread I asked before (I'm going to replace my panel this fall FWIW). 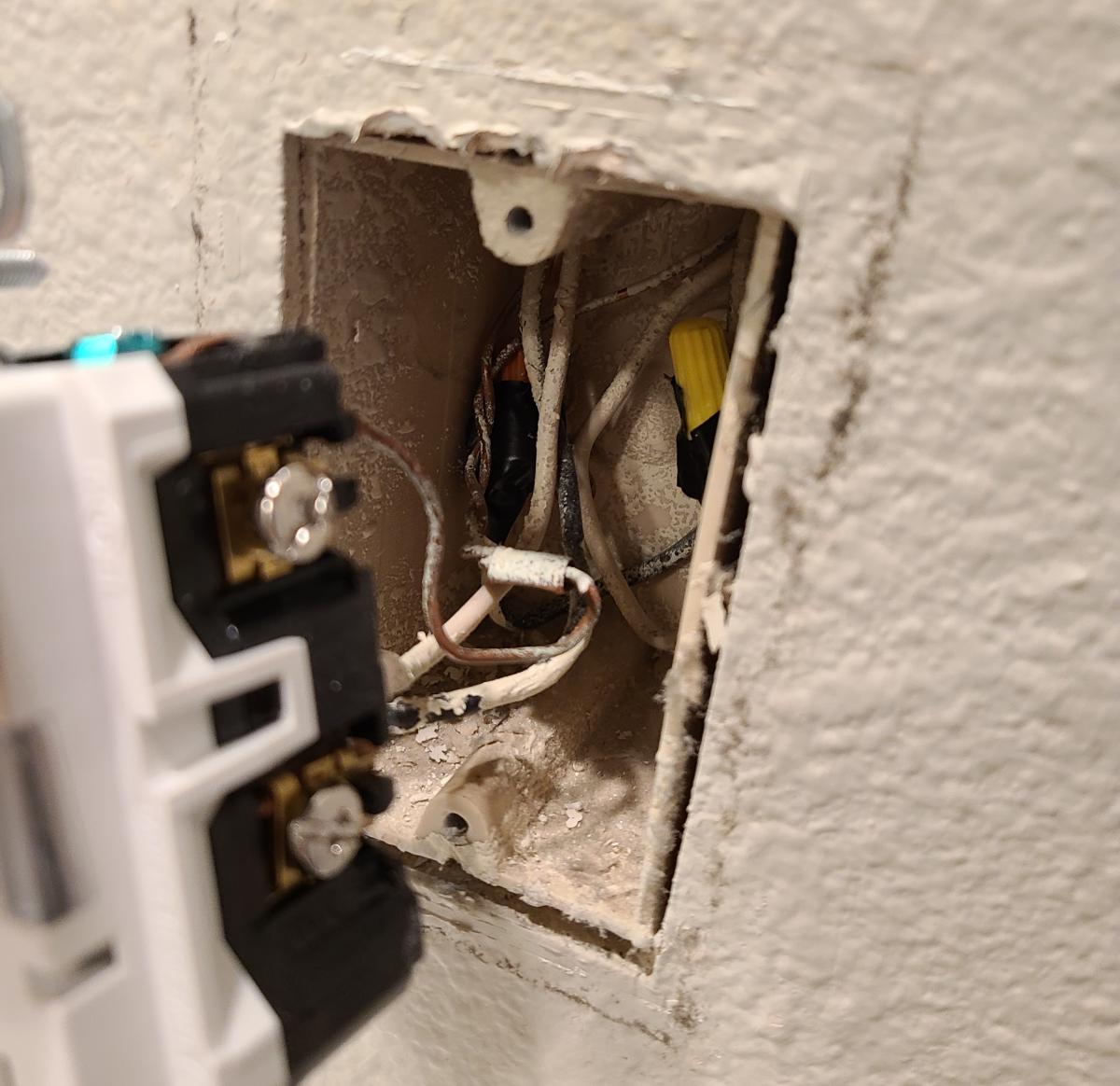 Yes. The GFCI would not work as expected. At best it might behave like a non-GFCI outlet. It could also cause a phase-to-phase short and trip the circuit breakers, as you noticed.

"Could my readings and diagnosis be wrong?"

Yes. Multitesters are cheap and easy to use. If you keep one probe on a ground wire at all times, it's nearly foolproof.

Edit: In the comments to this answer, it was noted that at least one of the circuits involved here has its neutral tied to multiple other circuits. This could cause a misleading indication from a "NCV tester" as there could be AC potential on the neutral wires even with the hot wires open.

"The master bathroom is also on breaker #4 and it has multiple GFCI outlets."

This is the key here. You have 2 circuits and multiple loads involved. While you might think this one receptacle is wired wrong, it's entirely possible that one of the other junction boxes is housing the home run for both circuits and that's where the connections are wrong. So I encourage you to check basically everything on those two circuits.

There are two practical ways to go about this. The cheap and time-consuming way is to turn off as many breakers as needed to figure out which circuit goes to every outlet. If you're willing to invest a little cash and learn how to use the tracing tools from the hardware store, you could narrow it down much more quickly.

Not the answer you're looking for? Browse other questions tagged electrical wiring gfci troubleshooting or ask your own question.

4
Can neutrals be tied together on different circuits?
1
Two breakers sharing same neutral?

1
How to wire GFCI outlet
1
Correctly wiring GFCI with two hot lines
0
GFCI won't reset, charges neutral when wired up
1
two circuits on a single pole GFCI breaker?
0
Replacing GFCI and found two hot wires
1
Why is the load circuit on my GFCI outlet dead?
3
Why don't downstream outlets work after replacing a GFCI outlet?
1
Converting electric receptacle with one hot and two neutral wires to GFCI
2
How do I intall GFCI breaker if wire for outlets is 12/3 using two breakers?
0
Wiring a blank face afci, gfci and a regular outlets in a circuit, made a loud noise in gfci box